Elon Musk’s tweet about Dogecoins caused a crucial surge in its value in April 2021. 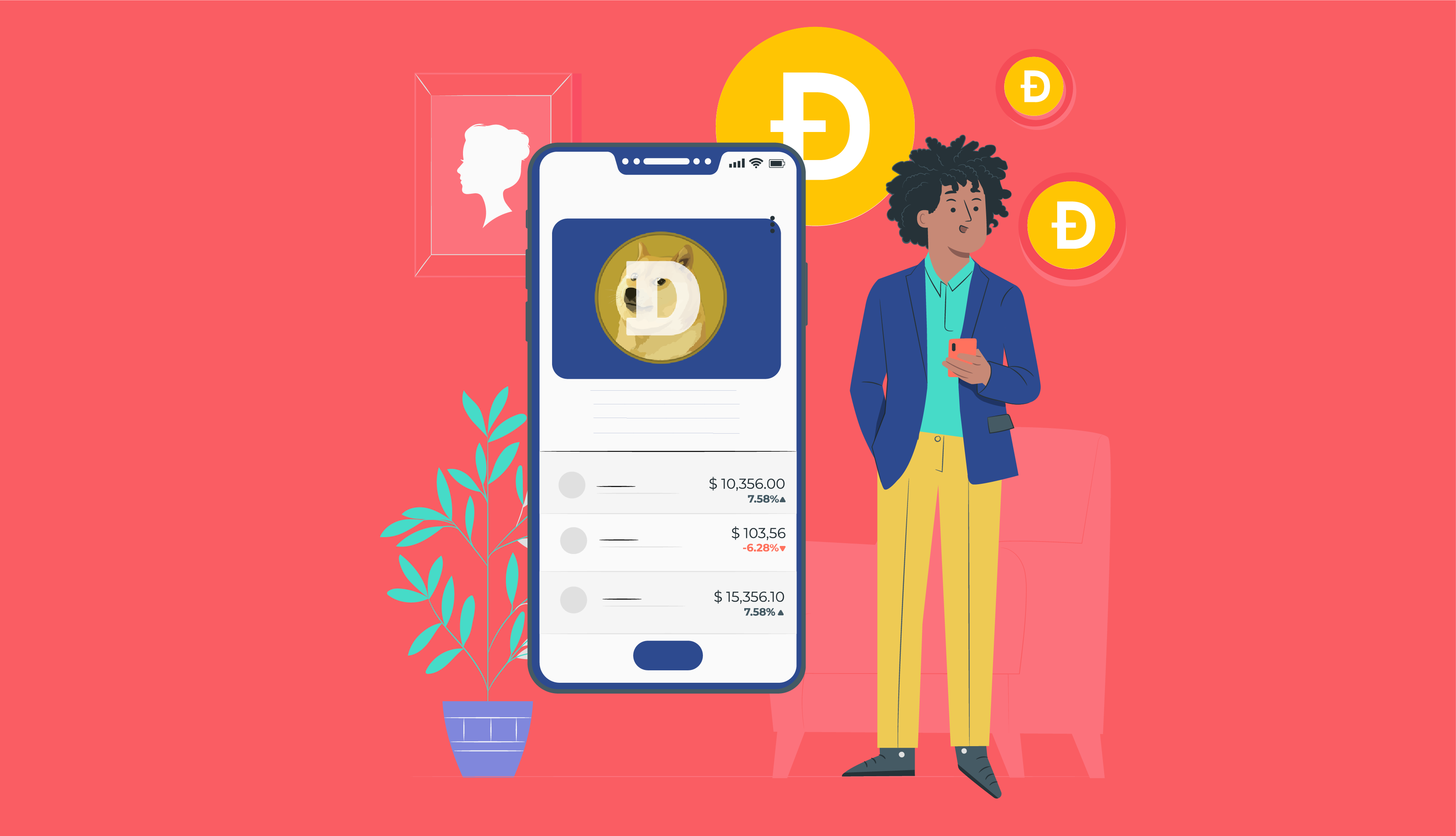 To answer the question “What is Dogecoin?” In short, it’s a peer-to-peer cryptocurrency just like Bitcoin. This fun online currency has seen a lot of development since its origin. And, Dogecoin has a quite interesting origin story. The cryptocurrency came into existence because of a viral meme. Yes! You read that right! Dogecoin memes got popular in 2013 and the internet made them viral. From safety airline videos to music videos, this meme sensation took over the year superfast. The purpose of developing Dogecoin was to make people laugh.The developers had jokingly created a replica with a 3-hours-programming, as claimed by them. The development process of Dogecoin was a copy of Bitcoin.

If you already follow the market trend, you must have noticed that Dogecoin has seen a prominent growth in the last few months. These Doge coins have nearly touched a market cap of $100 billion with a nearly 81% market value jump.

This crypto asset has a logo with a Shiba Inu Dog’s face on it. The Doge coins were made as a joke with no intention of turning them into a cryptocurrency. However, Billy Markus and Jackson Palmer did not know at the time that their joke would turn into an online committee this huge.

How to mine Dogecoin?

Well, Dogecoin uses Scrypt technology which is something that makes it different from Bitcoins. Now, to mine Dogecoin, you have to remember that the block time assigned to this cryptocurrency is one 1-minute. Moreover, there is no limitation to the number of the Dogecoins allowed.

The mining process is based on a network of nodes, just like any other cryptocurrency. As soon as one node confirms a transaction, it gets added into the blockchain network created by one of the top blockchain companies.

Moreover, Dogecoin uses a different hashing algorithm for its cryptocurrencies. As mentioned earlier, it follows Scrypt Technology just like Litecoin did. Now, you have to understand that Scrypt Technology is way faster compared to the typical SHA-256. It also uses a lot less power in comparison. Additionally, Litecoin has a block time of 2.5 minutes and Dogecoin is dependent on a 1-minute block time.

As the name suggests, Solo Dogecoin mining is the process where you invest all of your efforts and resources without any help. Thus, you also get to keep 100% of the returns you receive. Solo Dogemining also requires more patience as the confirmation of the transactions takes time- sometimes even weeks or months! Moreover, you will also need expertise in the crypto mining market to execute this task.

On the other hand, mining Dogecoin in a pool is more convenient but could be less beneficial as you get a small portion of the total reward you generate in the pool. But the frequency of mining blocks in the Pool is much higher. So, the probability of earning rewards is high as well.

How to get Dogecoin?

Now, as mentioned above, Dogecoin can be collected through the mining process. However, you can also use trading platforms to collect these crypto assets. Let’s discuss a few ways to answer the question “How to get Dogecoin?” -

1. SoDogetip bot- It is a Reddit platform where community members can participate in discussions to earn Dogecoin tips. This way the member does not invest or buy anything but still can own Dogecoins.

2. EarnCrypto- It provides people tasks such as downloading mobile applications, videos, etc., to earn Dogecoins in return. If you ever wondered how to increase your Dogecoin coin base, then you can keep checking the tasks that you can complete.

3. Faucets- Just like EarnCrypto, Faucets is also a way of earning Dogecoins in return for small tasks. The user gets a task and for completing each task, a specific value of Dogecoin is rewarded in return.

4. Trading- Of course, it is the simplest and fastest way to increase values in your Dogecoin coin base. Some platforms such as Binance and Crypto.com are offering support for Dogecoin trading.

5. Mining- And as mentioned earlier, Dogecoin mining is another way of earning Dogecoins. The mining can be done in the Solo vs Pool method with either Cloud hardware or physical ones.

To Conclude- Should you invest in Dogecoin?

If you keep an eye on the Dogecoin value, you will see that it has been fluctuating like anything. Even though Dogecoin witnessed a whopping 1,073% increase in its value in April, it still is less profitable in comparison to crypto currencies such as Bitcoins and other cryptocurrencies such as that.

The reason is the number of Dogecoins being circulated in the market. Compared to other alternatives such as Bitcoins, Ripple, or Ethereum, Dogecoin has a larger market circulation. However, it does not mean you will not earn through Dogecoin. This crypto asset is witnessing rapid growth. Thus, the ROI is always there.

And now that Elon Musk has endorsed Dogecoin as well through his series of tweets, investors are more keen and curious about this revolutionary cryptocurrency. In another series of events, Snoop Doggy Dog’s tweet also boosted Dogecoin’s value up to 55%.

PREVIOUS Best Coding Movies that will Inspire You to Code More

NEXT 5G and IoT Revolution Is Coming: What Should You Expect?

Explaining The ICO Regulations And Jurisdiction In Malta

As interest in the blockchain industry continues to grow, the number of ICOs being launched also keeps on increasing. Some recent statistics show that as many as 100 ICOs (Initial Coin Offering) are launched on a monthly average, with most start-ups choosing them as an option over conventional IPOs

How To Create And Sell Your Own NFT?

From the very beginning of the cryptocurrency and Blockchain market, security has been a topmost priority. This was also one of the fundamental approaches behind the invention of Crypto and Blockchain technology.In these recent years, the world has evident extraordinary developments in Blockchai