API Development Best Practices (with an introduction for beginners)

APIs are the underrated intermediaries that make inter-app communication a lot easier.

You searched for a query on Google and thanks to our SEO practices, that got you to this page. Now you’re reading this blog. An act that took you a couple of seconds involved the following:

Among all that goes on behind the laptop screen, perhaps what’s most intriguing is the interchange of information between Google and MobileAppdaily, or their servers.

This is what Application Programming Interfaces (API) are for!

When coders develop a website, they leave a set of instructions open-source. The point when another web-service (software that is hosted on an internet URL) tries to communicate with the first website, it does so with the assistance of this open-source code. In sophisticated terms, the codes are called applications, or in technical words an API.

They let 2 disparate web services hosted on the world wide web, communicate with each other. You can call them intermediaries between two web services which come in different shapes and sizes processing client-server queries on:

Okay, so we’ve answered “how does an API work?”

But that’s just scratching the surface. It’s important you understand a few conceptual elements of APIs, without which their operability would stop dead in its tracks.

API Key - Let’s call them a set of coded instructions passed into incoming API requests. It is their purpose to identify the origin and nature of the incoming request. They’re an inseparable part of the API architecture, required to block dubious sources accessing information from the web service.

Endpoint -  Are referenced to pass a value in a given URL.

JSON - The acronym stands for JavaScript Object Notion. This is a predefined format API development relies on for passing requests and sending responses between two apps.

GET - RESTful APIs use the same as an HTTP method to gather resources.

PUT - Again, an HTTP method of editing existing data. Development Agencies primarily engage it when they update a collection of information. For instance, a table.

PATCH - Used when updating a single value. Such as a single entry in a table (in reference to the above example).

POST -  interoperability is a two-way process. If an API has to collect information from an endpoint, it must be open to sharing data from its end. POST is an HTTP method for RESTful APIs to build (or add) such resources.

JSON Web Token -  it is a standard used to create access tokens for an application.

API Throttling - this feature is a fundamental part of developing an API. It regulates the frequency of users accessing the API at a point in time. When site traffic increases beyond a threshold defined by developers, the 429 error is displayed which reads “Too many readers.”

Rate Limiting - we’ve all faced situations while switching between applications/websites tabs when we are brandished a note which reads something like, “Our website has detected unusual traffic from your computer”. It’s’ nothing but the API limiting the rate of single-user access.

1. Open APIs - public APIs are implied to be open for all. They hold no restrictions on access and are publicly available.

2. Partner APIs - access to this category of APIs is extended through a licensure model.

3. Internal APIs - they are custom-built for in-house enterprise channels. The organization tests the veracity of its services/products usually with such APIs. Jeff Bezos put a special impetus on the ingenuity of such innovations which allowed Amazon’s services to be interoperable and be offered as a suite via their business arm Amazon Web Services.

4. Composite APIs - it differs from the categories above in that they are a sequence of processes triggered when a series of other tasks are executed. Note that above listed APIs are called to act upon the request of other APIs.

While the above categories broadly categorize and influence API development, there are also web service APIs we think readers should have an overview of:

1. SOAP - there has to be a set of messaging protocols for web services to interact with each other. Simple Object Access Protocol is a predefined set of rules which allows transmission of such messages. It uses Web Service definition language (WSDL) to publish details of its interface. It uses proprietary XML format message transfer.

2. REST - Representational State Transfer is a software architecture style used to define web services. They offer immense API development value as requesting codes can limit the scope of their request to specific data than point to an entire block of information. When incoming queries point to specific sets of information, it cuts short processing time. RESTful APIs are designed in conjunction with the REST protocol.

3. XML-RPC -  Unlike SOAP, here we use a specific XML format for data transfer. Its’ bandwidth consumption is relatively lower than other web service APIs along with it being easy to execute. Here’s an example:

4. JSON-RPC - it has multiple overlapping features with XML-RPC, however, it uses JSON to transfer data than XML. For instance,

Developing an API could pose all sorts of challenges with even shorter turn-around time for those working in an Agile environment. So we thought we’d curate a list of most recommended software testing tools in the market for you. The vendors are merely listed, not ranked in any order.

Must-have Features in an API Design

Triggers are implemented to source data from APIs. Post the first data synchronization, it is understood by all, there will be future changes. However, just as with any code, software developers need to be crystal clear about the who and why of changes, along with the trail of events. Records can be reconciled using timestamps, provided the API has built-in flexibility to execute filtered search criteria.

You now have a log of changes that are timestamped, but it’s part of the good coding practice to not flood the user with all changes at once. Paging has the ability to control both the volume and frequency of information a user gets access to, per session. There’s more, it can even display the remaining pages.

It’s all about optimizing the effectiveness of the API.

It is common consensus within the software development community that the REST architecture outperforms SOAP. Hence, It comes as no surprise that RESTful APIs bag the best reception.

REST is an architectural style, unlike SOAP which is a standard. By virtue of this fact, RESTful APIs can be built on multiple standards like HTTP, JSON, URL and XML. On the other hand SOAP APIs are largely based on HTML & XML.

This practice has become universal with API development for sharing user credentials with third parties. OAuth has come up with an update on OAuth 1.0, making OAuth 2.0 the preferred choice.

This one is down to common sense.

Anything that is well documented makes it a preferred choice for reference, for projects whose foundation is built on prior implementations. Documentation tools such a Swagger allow you the ease of just recording the annotations used. It then returns the output to the user.

But there are even times when only manual documentation will do. This practice is referred to as Mark-Down, and transpires when developers have no option but to record inputted commands themselves.

Break the term into two. The first word you get is throttle. It means to limit the supply of something, which is what the process is about. It helps to regulate and direct the total frequency of queries on the API. In fact, it is customizable to such extents, that we can limit the supply of people having access to the API as per days/weeks/months in advance. It is executed by the API manager, which further allows two types of customizability:

Hard throttling - the total number of users will not exceed the pre-defined threshold.

Soft throttling - people are notified if the API traffic is about to cross the pre-defined threshold. For instance, if the API can only accommodate a maximum of 100 users and the current traffic is 95, people will be notified of the same.

It can be used to limit the rate at which users actively access the API in addition the speed at which they can access it. API publishers, while uploading the APIs, assign multiple plans for subscribing licensees. As per the chosen model, B2B users can play around with live interactive sessions with the APIs. It’s calculated in real-time.

Stationing full-time employees for supervising data leaks from, say API servers, is a big NO. Human-error could prove costly in case there is a contingency the personnel is not trained for. Industry hotshots like Amazon Web Services have incumbent services like the Amazon Cloudwatch that automates such recurring status checks. You should have a checklist of alternatives to turn to in case such a disaster hits you. 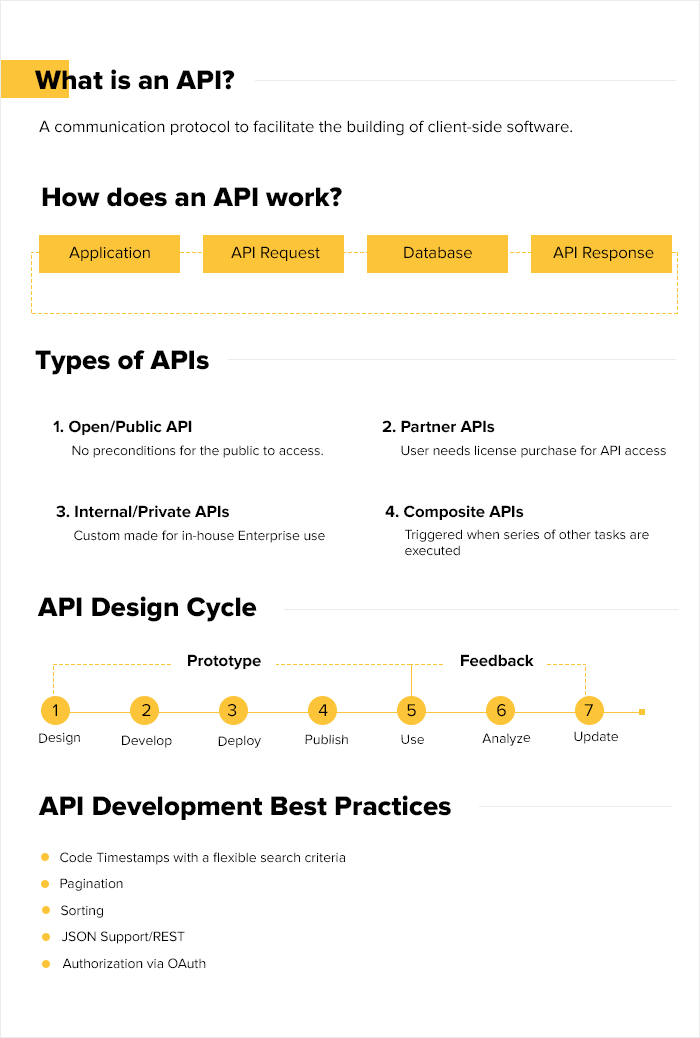 NEXT Reasons to Opt for a Mobile Web App or PWA

What are these new trends in mobile app development?According to Statista, by the third quarter of 2020, there are 2.87 million Android and 1.96 million apps for iOs existing on different leading application stores. So, it is clear that the competition is growing and to stand out, you will nee