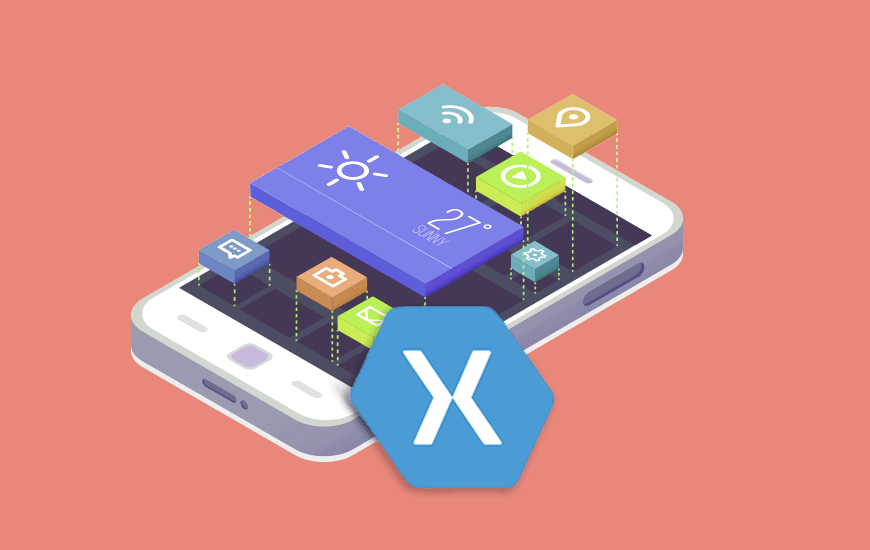 A majority of businesses are now looking for effective ways to reduce their overall costs associated with cross-platform app development while at the same time making sure that the user experience and overall quality remain high.

Here is our in-depth Xamarin review. Take a look.

Xamarin is a framework to build cross-platform mobile applications using the programming language C# and allows developers to share around 90 percent of code across major platforms. Interestingly, Xamarin is based on the Microsoft technology stack.

Xamarin enables various C# developers to build native iOS, Android and even Windows apps using native user interfaces and a shared codebase across multiple platforms. The web and mobile apps developed in Xamarin have many immediate benefits like faster development times and reduced costs due to the single shared codebase.

Reasons To Use Xamarin

Here is the list of some of the crucial reasons to use the Xamarin platform:

When it comes to the Xamarin framework, it is incorporated of many different offerings that are primarily designed to cater the need of different stages of the app development procedure. 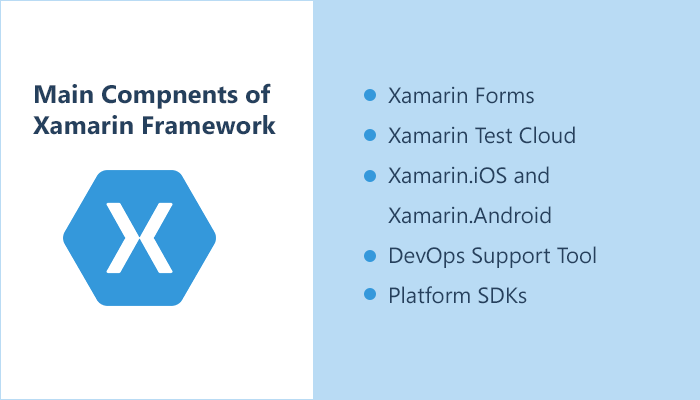 Here are the four main components, which are as follows:

Apart from this, feel free to have a look at the comparison of two of the widely used frameworks, i.e., Xamarin vs. Native development.

Native apps for iOS, Android, and Windows come into force as they offer unparalleled performance and user experience. But not all companies like budding startups have a large number of resources to develop natively for each mobile or Web application.

With so many benefits of Xamarin, a number of major companies opted for it to develop their own mobile apps. As of today, there are over 15,000 companies that rely on this framework and the efforts of Xamarin Developers.

The top companies which are using Xamarin for mobile app development include Fox Sports, Bosch, Olo, Siemens, Pinterest, The World Bank, and more. 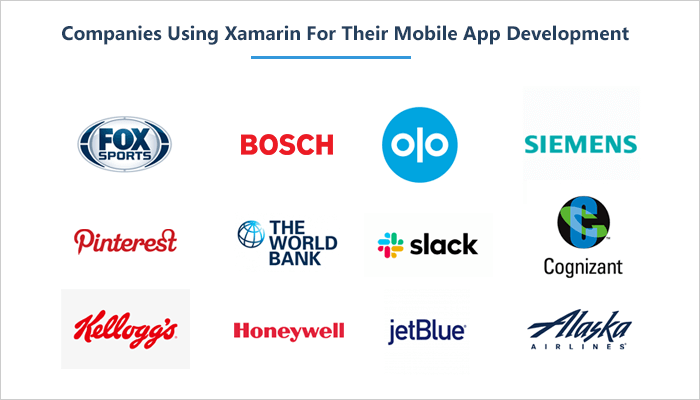 Now it's time to take a look at the various pros of Xamarin cross-platform development framework:

A shared codebase radically reduces the time and resources that are required to complete the Xamarin development process. The shared codebase also makes it easier to develop across all three platforms which are iOS, Android and Windows respectively.

The application logic underlying the UI layer such as database interactions and backend enterprise integration are also all coded only once in C#.

App developers can share more than 75 percent of the entire app development code across multiple operating platforms. This not only saves time but also helps in reducing the number of bugs during the mobile app development process.

For instance, if you were creating a native mobile app on their different app development platforms, then this would essentially require double effort as well as time to complete. That’s why building a cross-platform app in Xamarin is a no-brainer in this aspect, especially for large enterprise applications that need to run seamlessly across different platforms and devices.

Although native apps undoubtedly provide a superior User Experience (UX), cross-platform app development such as Xamarin are now also offering a native-like app performance. With the help of Xamarin Forms, the User Interface is rendered completely with native controls allowing the user to end up with a great native UI experience.

Xamarin also consists of UI design environments for Xamarin Studio and Visual studio which provides specialized UI and UX tools to the app developers and helping them in creating a flawless user experience.

Its unique binding approach also facilitates support for new features right after they are introduced into a particular device’s operating system.

Xamarin applications can easily satisfy various business requirements by offering a native app experience across multiple devices and platforms while providing an excellent user experience at the same time.

Xamarin cross-platform development framework greatly simplifies the app maintenance requirements. For example, in case of any updates or changes required, Xamarin developers can simply deploy these changes to the source code across all the platforms at once

Its shared codebase also limits the number of bugs, however when bugs are found they can be easily fixed across the different platforms.

Let’s consider an example that you own a well know taxi app. Now, let’s assume you want to build apps for iOS, Android, and Windows Phone as well. Doing it the old way, you would have to write and design three separate applications from scratch.

But with Xamarin, you can build a base for those three different platforms. And depending on how much your apps will rely on the device’s physical capabilities such as file system, geolocalization or cache, you can save from 40 percent to 66 percent of your total budget.

With so many positives, there are some downsides to this cross-platform app development platform. Following are the disadvantages of Xamarin you should consider:

While being beneficial in many ways, Xamarin is also slightly accused of consuming more time for the additional job of adjusting the app file size. This is mainly because of the generous use of Xamarin’s core libraries and functionality that burdens the app stores with wrong app file size. The size margin in the app stores may range from 3MB to 15MB.

Although Xamarin mobile application development saves time by creating a single app for multiple platforms, on the other hand, it also involves code linkage and referencing between target OS environments of different devices in use-end .Net frameworks. It implies that such efforts can add to the total time taken for initiation and app downloading.

Cross-platform app development software and tools have come a long way in the last few years and have created a flexible, alternative approach to app development.

To provide you with some detailed understanding, we have displayed above an in-depth app development model of Xamarin.

Many of our recent client projects at xDesign an award-winning app development agency in the UK have been built in Xamarin, a cross-platform software tool that generates native apps with platform-specific User Interfaces (UI) across iOS, Android and Windows.

Xamarin claims to roll out the updates on the same day, but lately, there is an issue of delay in the latest updates witnessed by a lot of developers across the globe. With the third-party tools in play, it’s not in their hand to immediately release the updates for the iOS and Android. So, it takes time for the implementations of new plugins.

The choice of open source technologies for Xamarin is not as rich as for Android and iOS mobile app development. Being based upon the native app development, Xamarin has limited access to open source libraries which enables the developers to use platform components and .Net open source resources.

However, Xamarin offers custom themes, UI controls, graphs, and other features that can be added to the app.

Here is the comparison between Xamarin Forms and Xamarin Native. Take a look: 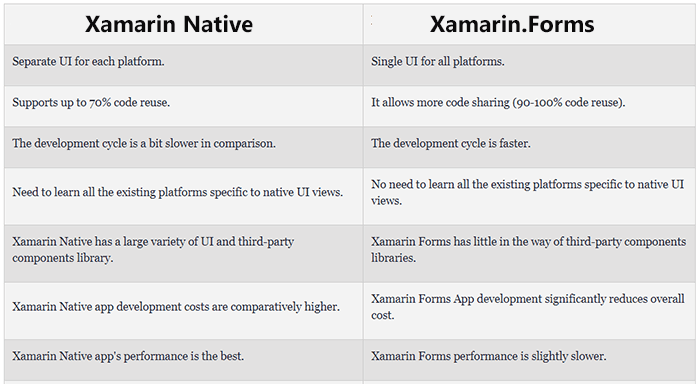 With time, Xamarin cross-platform development has gained more attention across the globe and that too for good. At this time, when there are already various mobile app development frameworks and tools existing in the market, there comes the requirement of a platform that can support multiple platforms with minimal efforts and that’s where Xamarin come in handy.

In this battle of native vs cross-platform applications, we think we all can agree that there are a number of compelling benefits in favor of Xamarin app development framework and xDesign have seen a sharp rise in the number of apps being built and deployed with Xamarin.

Choosing whether to go with native app development or cross-platform development with Xamarin will depend entirely on your business requirements and what you’re trying to achieve. The best thing to do in this case is to consult a skilled, experienced mobile app development company that can guide you through the right type of app development for your project and help you in hiring excellent Xamarin developers.

For more Xamarin cross-platform mobile app development insights, make sure you follow MobileAppDaily by clicking on ‘Subscribe’ button and never miss another exciting update from the mobile app industry.

How to Silence Android Phones while Charging? A Step-wise Guide

So often users leave smartphones on charging while they sleep, or get busier in other tasks. However, the charging time of many smartphones is the time when one can use it as a break- especially when many of us are now addicted to our phones. But constant notifications can ruin the plan. Ma

Best Security Practices For Java and Android in 2022: Symmetric Encryption with AES

As an app developer, you want to make sure that the app you are building is flawless and secure from all the unethical attacks at the same time. And in order to make your mobile application secure from such cyber attacks, the app developers are required to follow certain security practices and strat

Notwithstanding the reduced growth of the overall business world amidst the pandemic, there has been a consistent rise in the usage of financial applications. With the development being mostly handled from remote homes, virtually, you could almost sense the financial institutions are keen on chafing