Get an in depth analysis on ride-sharing market, development costs and other insights app owners should be aware of before jumping into development of an app like Uber. 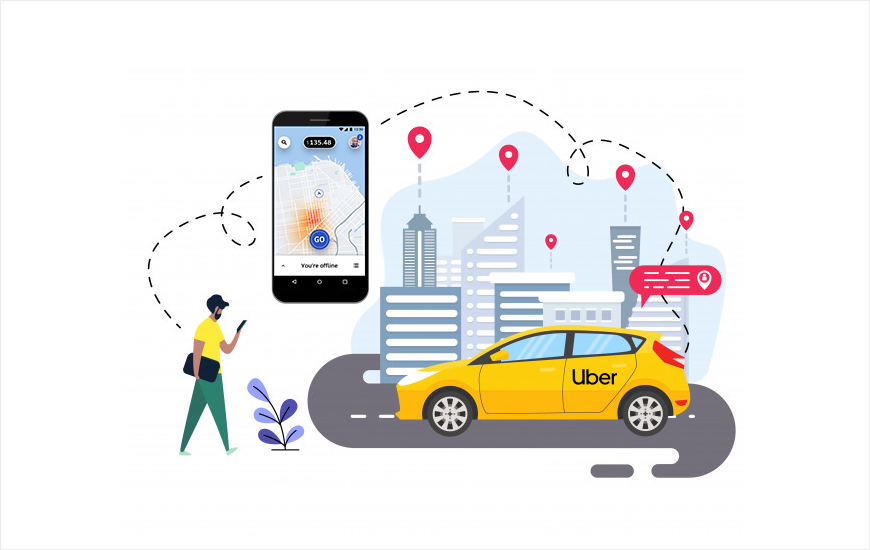 Uber is no longer an app but a verb for ride-hailing. Leading a market that’s estimated to grow to US$318,765m by 2023, Uber has inspired many other app owners to make Uber clone apps.

While some apps like Lyft, Didi, Grab and Ola fared well; there are thousands of other ride-hailing apps on the app store that are galaxies away from achieving that Uber verb status. That’s why we’ve dug deep into both the ride-hailing market and the app development process of Uber clone apps to address the burning question- How much did Uber app cost to develop?

What is Uber Mobile App Made of? 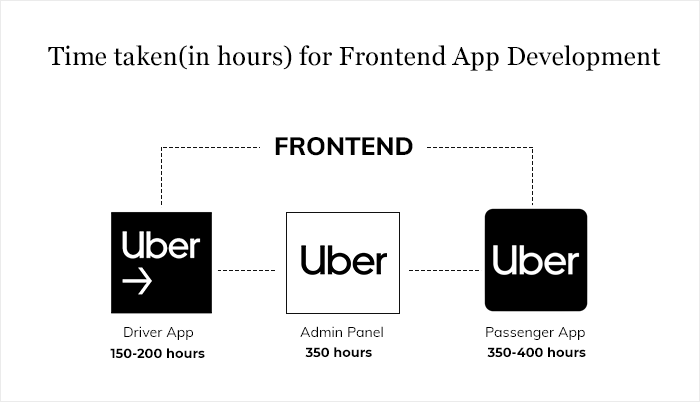 Contrary to what most aspiring cab-hailing app owners assume, Uber is not a single app but a company that runs two frontend apps, an admin panel and a server on the backend.fv

On the backend, Uber has a server that collects the requests from the two Uber apps, processes it, and sends the appropriate response. The faster the server processes the data, the better is the functionality of the apps.

What are the Basic Features of App like Uber?

Now that the basics are clear, let’s get a little detailed with what features do these apps offer to their target audience?

What about the Advanced Features of Uber-like App

What does Uber Admin Panel Offer?

This is the fairy godmother making sure no one’s raining on Uber’s parade, monitoring and managing Uber’s various components. It’s the web-based administrative tool that performs the following functions:

How Long it Takes to Build an App Like Uber for iOS And Android?

Honestly, it depends! There are so many factors that determine the development time and cost of an Uber clone app and hence the dollars you shells vary according to the choices you make. Should you opt for an offshore or onshore app development company, what tech stack you need in your app, how many features or functionalities you want integrated, etc. That’s why we’ve focussed on the time taken to develop these functionalities and integrate the available technologies in the development of an app like Uber.

Time taken to develop the following functionalities of the Uber app:

Bonus Tip: Considering the popularity of Cloud, if an app owner of an Uber clone app wants to integrate Cloud service in the apps, if you do, the setup will take over 8 hours and the cost of these services will vary according to your usage.

If you are looking forward to the question ‘how to develop an app like uber,’ you better learn about the app’s tech stacks. The Tech Stack of an app includes all the technologies you need to have dedicated features in your app. These features can be clubbed into three core functionalities, both for Passenger and Driver app and although both take almost the same time in development, there are a few minor differences.

Time (in hours) taken to develop the following in-app services

How Much Does it Cost to Develop an App Like Uber?

To find out how much it cost to build an app, you simply have to multiply the estimated hours with the hourly rate of a given app development company.

According to Buildfire, you could go as low as $25 per hour with an offshore app development company, pick an onshore or local developer for anywhere between $37 per hour to $60 per hour or get a high-quality Uber clone app built with a Silicon Valley Agency for $180 per hour. To give you an overview, here’s an average hourly rate in the top three hubs of cost of building an app like uber.

What Analytics Tools Are Used By Uber?

Needless to say, to ensure constant growth of your Uber clone app, you need an in-app review option that receives feedback directly from customers, strengthening the analytic systems.

How Much Will It Cost To Maintain An App Like Uber?

Post-deployment planning is just as important as developing the app. Now that you know Uber app development cost, you are better prepared to estimate the post-deployment i.e. maintenance cost of an app like Uber.

The industry rate for software maintenance is about 15 to 20 percent of the original development costs. So if your app cost $100,000 to build, the estimate maintenance cost will be $20,000 per year.

What’s so Special About Uber App?

Uber, a ride-hailing app, was founded in 2009 by long-serving CEO Travis Kalanick (now resigned, though still on the board) and Garrett Camp in 2009, followed by a beta launch in May 2010 and officially launched in San Francisco, USA, in 2011.

Today, the Uber app is available in 65 countries and over 600 cities worldwide. It’s chief rivals being Lyft in the US and Didi Chuxing, valued at $56 billion, in Asia.

Over the decade, Uber has transformed into a verb. The scale at which it operates is unfathomable- 14 million Uber trips are completed each day, with over 3.9 million Uber drivers worldwide, reports Business of apps. In the U.S. alone, the Uber app’s share of the ride-hailing market is estimated at between 65 and 69%.

Uber app has also diversified its core offering over the years, introduced peer-to-peer rides through

How Much Uber Charges for its Services?

Uber fare rates vary according to the region and countries. Uber app fares are relatively cheaper in developing countries. Further, the in-app fares depend on the service you order (uberX, BLACK, SUV). Uber app estimates the fare for a ride using four main criteria:

Similarly, Uber app makes its money from the service buyers and providers, drawing:

How profitable is the ride-hailing market?

But what about the leading competitors you’ll be facing in the market?

Orbis Research forecasts that the leading market players in the ride-hailing industry mainly include:

How can you beat your competitors?

As stated earlier, the ride-hailing market has both a high user penetration rate and fierce competition. So if you want to surpass the dominant competitor Uber-like apps, you not only need to identify missing utilities but redefine the existing user experience. Some of the latest Uber clone apps features trending in 2020 include:

Building an MVP for an On-Demand Platform requires app owners to invest in dedicated web/mobile interfaces for both supply and demand. This can prove quite costly for startups looking to build an app like Uber on a limited budget. That’s why the first thing app owners need to consider is the role of the Uber clone app in their business. Is it an extension of your services to promote an existing business or is it the sole business itself.

Similarly, mobile app security against a data breach is yet another key concern that apps like Uber can’t afford to lax on. Moreover, if you are aware of the recent controversies including the global #boycottuber movement, you’ll know that entering into a popular, people-driven service involves bigger risks than monetary losses.

PREVIOUS Will Cryptocurrency Rule Over The Industries?

NEXT Glance, a Subsidiary of InMobi, Raises $45M to Expand its Business Outside of India

Here is What Makes You a Pro-Swift Developer in 2022