Top 10 Mobile App Development Frameworks Developers Should Use In 2021 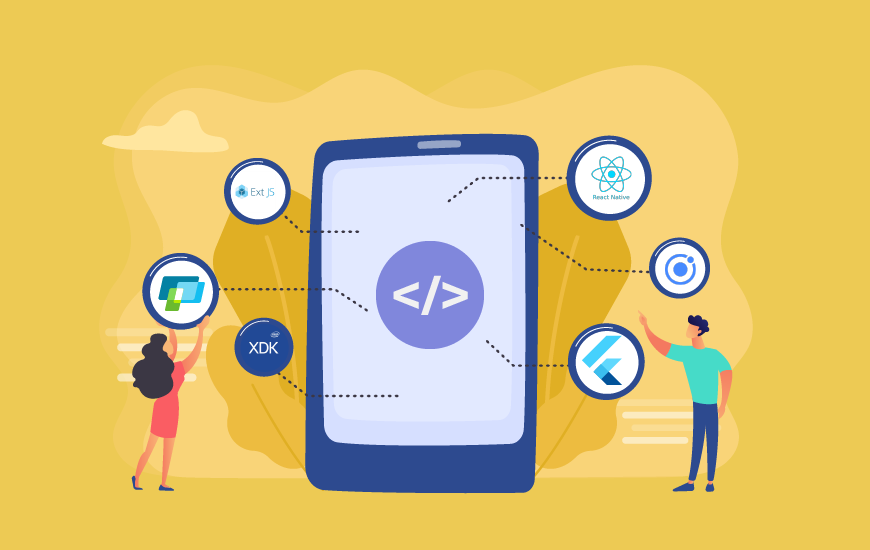 For many years’, application frameworks have played an important role in helping application developers choose who they want to serve. Frameworks help you deliver to various operating systems. As history would have it, by 2021 we have two major operating systems (Android and iOS) that are among the user favorites. StatCounter shares that in the last quarter of 2020, Android and iOS held 72.93% and 26.53% of the market share respectively. Windows serves 0.03% while others are sharing 0.51% of total devices. On looking closely, each operating system caters to a specific type of audience, at least more than not.

We are sure that you know that mobile application development frameworks play a big role in building amazing mobile applications for different operating systems that users can use and admire. They allow you to create applications with the help of their several sub-components like debuggers, tool sets, different code libraries, interfaces, and many more.

Do you know what are the best mobile app development frameworks developers are utilizing to construct best in class mobile apps?

To help you choose the best frameworks, libraries and beware you of all the options you have, mentioned below are some of the best mobile frameworks you should consider for your mobile app development:

The creation of an app that will work perfectly on different operating systems and platforms such as iOS, Android, Blackberry, Windows Phone 7, Opera Mobile/Mini, MeeGo, Nook, and Firefox Mobile has become very easy with jQuery. ThemeRoller is one of its amazing features, allowing you to create an outstanding design for your application. It is powered by the Ajax navigation system and also plays a vital role in ensuring the smooth animation of pages by eradicating all errors.

This mobile framework is based on Javascript and HTML5 and due to its flexible nature, it helps in creating a wide range of both simple and complex apps. It offers several widgets such as toolbars, menus, forms, and lists, etc. and hence, developing mobile apps for Android, iOS, and Windows is an easy task. The best thing is that it can work easily with other APIs and this means that you can combine different APIs with an objective to achieve the desired result.

In addition, there are many tools available such as Sencha Test that helps you to test your app by doing cross-platform and cross-browser testing. This is described as a debugging tool, which helps in analyzing the code and in improving the overall performance of the application.

This development kit is created by Intel and help you in creating HTML5 apps fast. Several amazing features such as supporting industry-leading plugins and tools are available with this software development tool.

With the support of third-party plugins, the mobile app development project can be done in a short span of time. Plugins are also very useful as they help you with advertising, in-app purchasing and authentication to name a few. In addition, you will get power debugging tools such as Chrome Developer Tools through which debugging JavaScript can be done. Weinre is another remote debugging tool that is helpful in running an app on a particular device.

With the best web and native app components, you can build highly interactive native as well as progressive web apps. This mobile framework is the best choice as it can work in a streamlined manner on the latest mobile devices available. Moreover, Ionic works perfectly with Angular and as a result, you get an efficient core architecture, which is perfect for creating even highly complicated apps.

React Native is globally known as a reliable application development framework that effectively uses JavaScript as its core scripting programming language. Introduced by Facebook, this platform has become one of the best choices of app developers. Various app development companies are considering it a top-rated mobile framework for the future of hybrid app development.

One thing is sure when you use React Native, you’ll be in touch with a vast React community which later helps you develop an app not even with ease but in the minimum time possible. If you’re searching for the best cross-platform app development, React Native would be a wise option to proceed with.

Flutter the best framework for mobile apps. It is a recently launched app development product of Google. The company introduced this platform specifically to facilitate hybrid app developers. The platform has its own native UI components and WebView but instead of using them, it uses Skia, a 2D rendering engine to create appealing visuals. With the use of these visual components, an application will get the potential to resemble native Material Design and Cupertino style widgets.

For developers, it’s a well-managed mobile app framework that makes the development easy, swift and extremely optimized. The amazing thing about this mobile framework is that it offers Hot Reload functionality which helps developers testing the project even without putting in the repetitive restart efforts.

Adobe company has come up with this mobile app framework that provides software solutions like InDesign, Illustrator, and Photoshop, etc. for designers. It has the ability to guarantee high performance on different devices and enable you to deliver the well-developed app to your customers. Apps for iOS, Android, Blackberry, Windows, Mac OS, Firefox OS, Ubuntu and Windows Phone can be developed in a hassle-free manner.

With a collaboration feature, several app developers can work on a single project and on the other hand, Hydration is one of its wonderful tools that reduces the amount of time required to compile an app and also simplify the process of updating it. This means that when a developer uploads a new version then a user will get a notification and if they are looking forward to running the new version, it will automatically run the final code.

Xamarin is an open-source cross-platform mobile app development platform that is owned by Microsoft. The platform is supported by C# programming language which again a plus point in its quality list. Known as a developer platform, Xamarin has been actively used to develop native applications for Android, iOS and Mac Os.

It’s hitting the app development grounds and become the best mobile app framework that carefully uses a single and shared codebase to build perfectly incorporated apps for the clients. Moreover, Xamarin has a few impressive advantages that include that ensure fewer bugs and swift app development. It also saves a lot of development as it allows developers to reutilize code and other matching syntaxes.

Kendo UI is also the most reliable mobile app framework which follows updated web standards to provide applications that are up to the mark. Applications developed using this best mobile framework seamlessly get integrated with AngularJS. Developers can further customize the apps to make them compatible with different mobile devices.

Kendo UI is the best framework for mobile apps. It’s highly efficient and has the potential to compete with the Ionic app development framework which is again a major reason to choose it as an ideal mobile app framework.

The time has come to discuss Mobincube, the great app interface which is likely to compete with React Native in terms of functionality. This is the best tool that allows developers to develop almost all kinds of mobile apps for sectors like Education, Healthcare, Entertainment, Business, etc. By using this app development framework, business owners can boost their sales in effective manners.

Mobile frameworks get new features, which will make the app development easier as well as faster. You can choose the best one for your mobile app development as per your requirements, functions of an app, plugins you need, application interaction with a user and your target platform. So, you as an app developer now have the chance to develop apps without any problems.

Subscribe MobileAppDaily if you don’t want to miss updated news and trends about mobile app development.

PREVIOUS Understanding the Notable Website and App Design Differences in 2021

NEXT Advantages of Using Mobile App Instead of Websites

With today's mobile technology, people have successfully transformed their lives around the concept of digitalization. Mobile and web applications have now become an integral part of our day-to-day activities. It doesn't matter which sector we talk about, as now the majority of industry vert

How Much Does it Cost to Build an App like TikTok?

TikTok, one of the most popular social media apps, has penetrated the global market with plenty of USPs to offer. The app holds approximately 50.3% of the market in the USA and 87.9% of the market in Saudi Arabia. These numbers related to TikTok app development are based on a report shared by Statis