What are Hybrid Mobile Apps and why should you prefer them?

Hybrid mobile apps are a trend in the app development industry currently. Features such as extensive scalability and low development cost make these frameworks popular. 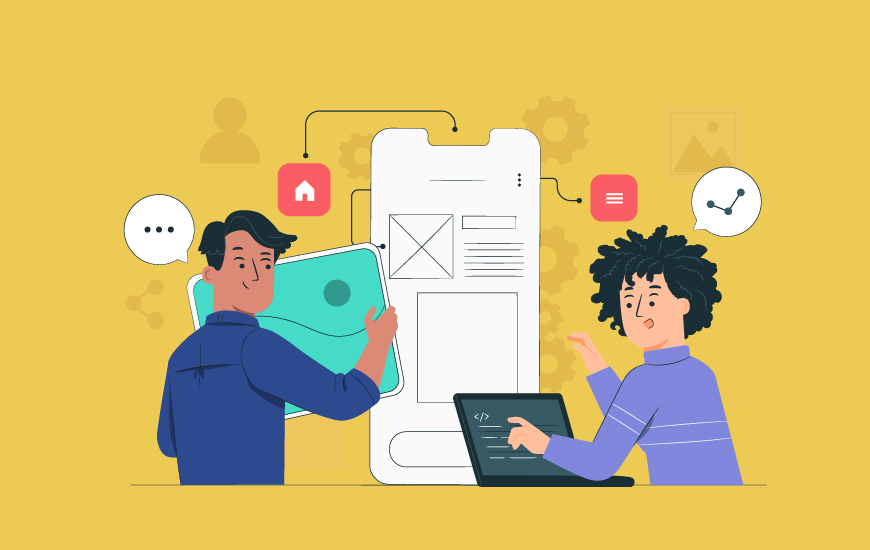 Hybrid mobile apps, as the name suggests, are apps that can support multiple operating systems and devices. These apps are built once and then deployed on app stores dedicated to different operating systems. In other words, hybrid applications are a combination of native and web application elements. When you use the app, you get the performance and features of a native app but these apps use browsers to function.

Before proceeding further, let’s understand a few crucial advantages of hybrid mobile applications so that you can understand the difference between a native app vs hybrid app. The hybrid mobile app frameworks are helping developers of different experience levels to build apps with competitive qualities and amazing features. In this blog, we are shortlisting a few top hybrid app development services that are popular according to market statistics. So, without further ado, let’s have a look at these frameworks.

One of the most popular options for the hybrid mobile app development process, React Native framework is open source. According to Statista, React Native has led the competition between hybrid app frameworks with 42% hold of the market in 2019 and 2020 as well. However, in 2021, it saw a decline in its popularity and had 38% of the market share.

One of the most famous hybrid app development services, React Native is a suitable platform to build apps for iOS, Android, and more operating systems. You can also use this JavaScript framework to build web applications.

In 2021, Flutter secured the first position in the race of hybrid app development services and held 42% of the market. The hybrid mobile app development is owned and created by tech giant Google and was first released in 2017. This open-source SDK allows developers to build apps that support Windows, Android, and iOS among other operating systems.

This hybrid app framework was initially released in 2013 and has an MIT license. The framework is written in one of the most popular hybrid app languages, JavaScript, and is open source. You can use Ionic SDK as a set of components to build apps with web technologies such as CSS, HTML5, and Sass.

NativeScript is an open-source framework that is used for the development of mobile apps. NativeScript apps are built using JavaScript or any other languages that can transpile to JavaScript; for example, TypeScript. The framework also supports Angular and Vue JavaScript frameworks.

Quasar is another completely free open-source license under MIT. It is powered by Vue.js. This one of the top frameworks for hybrid mobile apps enables us to write codes a single time and deploy them as a website, mobile app, and desktop. It is also claimed to be the most performance focussed framework.

Kendo UI is a framework that is used for hybrid mobile apps and it also gives a collection of JavaScript components. The hybrid mobile app development framework is powered by Progress Telerik and is again open-source. It has been reviewed well all across the world.

Aurelia is a framework that is a collection of modern JavaScript modules and it can be used together to provide an efficient platform for building browser, mobile, and desktop applications. The open-source framework is licensed by MIT as well.

This open-source makes a hybrid mobile app that has a native feel. It comes with some extra tools such as Electron and NW.js and it can build a native desktop app as well. Features provided by Framework 7 include native scrolling, library-agnostic, pages transition animation, multiple views support, hardware-accelerated animations via CSS3, route pages by using the combination of XHR, caching, browser history, and preloading.

It is an open-source hybrid mobile app development framework licensed under the Apache v2 license. Onsen UI consists of three layers which include CSS components, web components, and framework bindings. It is preferred for commercial purposes as it is really easy to use.

Ext JS is considered the best JavaScript framework in the world. For bigger companies, it is a great choice and better than others as it helps in making high-performance apps with a native experience. The framework has a lot of ready-to-use templates and it has support for Angular and Reacts.

Another JavaScript-based best hybrid mobile app framework is Axway Appcelerator. To improve app performance and make it more user-friendly, the framework uses a combination of Titanium SDK and JavaScript. It also has support for Angular and Vue.

It is the youngest framework in hybrid app development. It is powered by Svelte and NativeScript. It takes the approach of shifting the work into compiling steps at the given time lot. One con in this regard is that there might be some issues as the framework is comparatively newer.

Last but not least, Xamarin is considered one of the top hybrid mobile app frameworks. Xamarin’s tools can be used to write native Android, iOS, and Windows apps. The company was founded in 2011 and it is owned by Microsoft and is based in San Francisco.

As now we have discussed a few advantages that come with hybrid app development services, moving forward, let’s take a few famous examples that are already existing in the market.

Instagram is one of the most downloaded apps we have right now. It is powered by HTML5. The app has a great engagement rate among its audience. The app also has supporting tools. For instance, to enhance profile engagement, some of these tools can also be used to get 10 likes for free.

As it is a social media app, it can also be used for messaging. The most important reason that keeps the audience hooked to this app is its features including reels, stories, and IGTV.

WhatsApp is another example of a very popular hybrid app. It is possible to do without other social media apps but with WhatsApp, it is a different story. Technically, it only provides an option for messaging and stories, but the interface is so user-friendly and the faster response speed makes it an important source of communication. For a few years, WhatsApp has become a popular tool among millions of users across the world. According to BusinessofApps, this one of the best free apps is used by more than 2 billion people across the world currently.

Twitter needs no introduction as we all know that this is one of the most used social media apps of recent times. Also, it enjoys a great engagement rate. It is also powered by HTML5. People log in to this app to get updates about the daily happenings as Twitter never sleeps. In addition to that, people also use it as a video streaming platform. Not just videos, but one can also share picture content here.

Gmail is a hybrid app designed to help you in managing your emails portably. The app offers features like drafting, reviewing, and deleting emails. You can also manage your email contacts from the app itself and use the email address to login into other supporting apps.

It won’t be wrong if we define Uber as a crucial app as well. The reason is that with the easy working interface it provides and the user-friendly system it has, people consider it as the first option when they look forward to booking a cab. It is more convenient when it is used in Android and iOS and shows better performance.   Also, it provides multiple payment methods from Paytm, UPI, Debit card, Cash, and many others so that users have the option to choose from and there is no issue in this regard.

Hybrid apps are not a talk of the future anymore. But by seeing their current popularity, it can easily be guessed that they are going to dominate the future markets for many upcoming years. As devices get upgraded and get available in more shapes and designs, these hybrid frameworks will evolve to support them.

In the end, we hope you found this blog on top hybrid app frameworks useful. You can explore MobileAppDaily to read more informative blogs to improve your tech world knowledge. We will see you with another blog soon.

Mobile apps are flowing in the app stores and if you search you will get hundreds of apps for your one requirement. However, not every app gets successful and touches the millions on its number of downloads scoreboard. Competing against millions of apps in the app store requires you to take care of

The last decade contributed crucially to the evolution of Artificial Intelligence (AI). Technology got smarter, innovative, and more comfortable compared to what it was before AI had expanded its coverage. The modern world is not only looking into developments of driverless cars or deep space explor

The mobile app world is expanding at a very rapid rate and penetrating every possible area to obtain the benefit through digital technology. Mobile app technology is evolving every single day and providing more accessible and precise ways to generate significant revenues.Enterprise apps have alr