The Who, Why & What of a Minimum Viable Product

The shortest route to market capitalization is to start with the simplest iteration of your product. 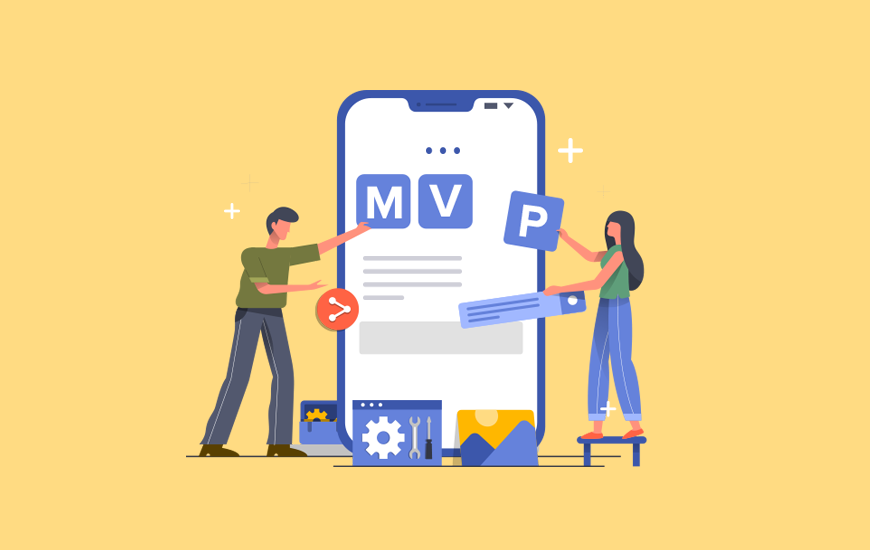 You have an idea you think can change the world?
Don’t have the funds to launch a company?
You fear someone would pounce on the idea before you do?

Don’t worry, it’s not a group therapy session that we’re hearing you out but yes we are trying to allay the fears of Startups who’re biting their nails to prepare a launch-ready mobile app.

Do they stick to traditional Software Development Lifecycles to introduce their concept to users or launch a prototype version with minimalist features?

The answer depends on who asks the question, but regardless of the company size, the debate comes to a standstill when you wonder, do you need a Minimum Viable Product? While that’s a good question, an even better iteration would be the one that we start this post with, so let’s get to it!

What is a Minimum Viable Product?

We’ll discuss a project development approach tech aficionados often vouch for, which is relatable to the concept of a minimum viable product. You’d then be able to define an MVP yourself. If you are an I.T. generalist, you’d definitely be familiar with hackathons. For first-timers, here’s how Wikipedia puts it:

The goal of a hackathon is to create usable software or hardware with the goal of creating a functioning product by the end of the event.

Coders have to come up with innovative tech solutions within 24-72 hours for a real-world problem statement. Competition entrants either design a mobile app, or a website or a quasi automated robot yada-yada. Keeping the core functionality minimal, collaborating developers aim for a usable prototype that is

Notice the words we’ve highlighted above and stretch the hackathon cycle to a couple of notches.

Say instead of 72 hours you had 6 months.

You tapped into your network to get the right blend of human resources (graphic designers, domain experts etc) supporting your cause.

Since you’re proactive, you’ve even managed to profile your end-user or have a tangible idea of it.

This product that your efforts culminate into, built in a predefined schedule, keeping the target audience in mind with minimalist features, will be the minimum viable product.

But who does it suit the most?

Established I.T. businesses tend to be laggard in that they set their Software Development Life Cycles in stone. However, fledgling startups who don’t have a strong user base, let alone a testable beta-version product, seem to be coping well with this approach for the last decade and a half. Yes, the concept is exceptionally well-rooted in software/hardware development.

But were we to point a coterie of MVP loyalists, it could be any team running on a tight deadline, bootstrapping its way into the market which is uncertain of public reception.

It is for this reason, apart from a few others that we shall discuss later that an MVP encapsulates ONLY the core functionality that people could be on the lookout for!

Is there anything else to an MVP?

More than you’d think it does!

MVPs have development stages that transmute into technical jargons upon completion. This is how it begins:

Remember the day when you first envisaged your idea of world domination on a handkerchief! Ideally, that’s where everyone usually begins. Once those diagrams are elaborated in blueprint details, it becomes a formal Mobile App Prototype. For the developers, it serves as a referential guide for designing navigational throughputs within the app. In other words, we are at a pre-MVP stage.

When you feel, or know deep inside, the moment has come to roll out functionalities one at a time to the users, this is the actual MVP-launch stage. What do you do? You roll out just enough in-app features which maintain an equilibrium between user expectation and future innovation.

People need to be told what they should want, what’s missing from their lives and what could end up improving them. Such a school of thought is advocated as the ‘push-pull effect’. You push a concept to the masses, create hype around your offering which in turn pulls their attention towards your prescribed call to action.

If your action plan simplifies a previously complicated process for users, then you have by virtue of a post-MVP-impact, a Proof of Concept. As the label implies, by this time you possess measurable proof of market acceptance.

It could be the volume of downloads that the prototype version of your app gets on its initial release. Or an aggregate of positive ratings the users give or anything else which could be quantifiable for prospective investors. Whatever the driving factors are, they could be the primary cause for growth in the immediate future.

What are the benefits of an MVP?

We don’t intend to suggest that an MVP marketing design is a sure short template to be the next big thing on the App Store. But evidence to suggest anything contrary is scarce. If you think your idea has the potential to be the next ‘soonicorn’ (soon to be unicorns), or a unicorn, then MVP is the baby step you need to take. 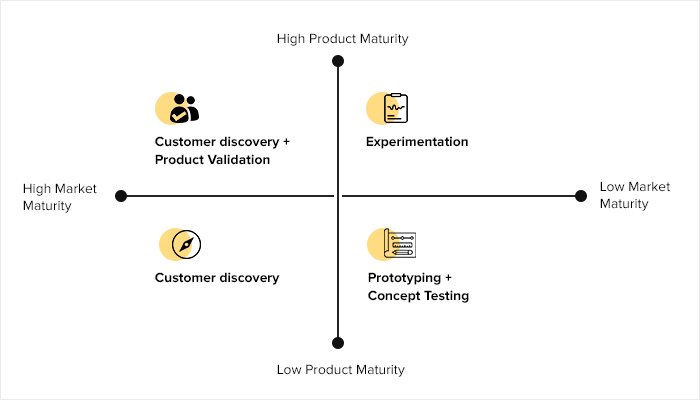 The bottom line - it promotes appreciable savings for teams finding it hard to balance resource scarcity and cash-flows.

Big things have small beginnings and so did many of the apps we now consider elemental to daily chores. We wouldn’t realize the simplicity & convenience a few swipes could bring to our lives, had the following companies not made their market entry the way they did:

Travis Kalanick and Garrett Camp set out to metamorphose the call for a “taxi” into booking a cab through a text message. So they started UberCab which was no more than an invite-only application in the beginning, limited to friends and family. The image below represents a couple of updates incorporated into the MVP, whose images don’t surf the net, as people didn’t glimpse the future. 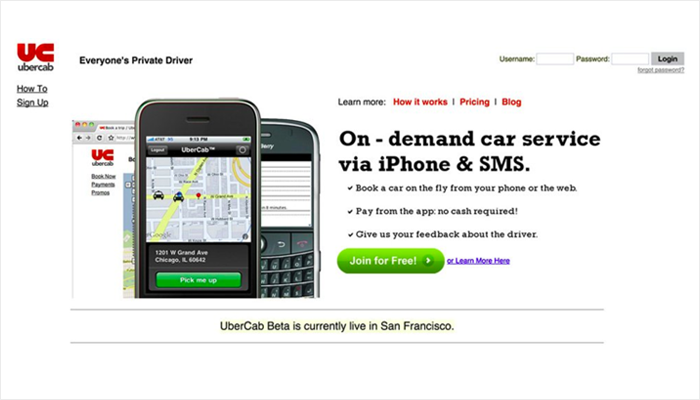 This classroom project was inspired from the George Clooney and Brad Pitt starrer Burn After Reading. Hell no, we’re kidding. But the thrilling sensation of messages self-destructing within 10 seconds of being sent left students wanting for more. Access to the app was limited to iOS during its infancy with photos not messages, being the article of conversation. The company raised $30 Billion in a single day through public opening (losing more than $20 Billion later) in March 2017. 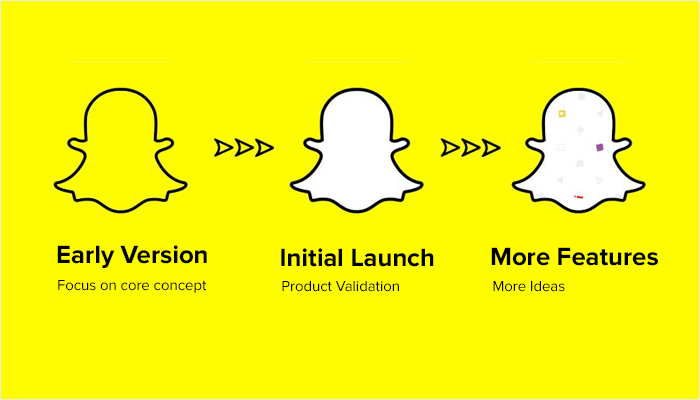 Once AirBed&Breakfast, all that the founder pair of the company did was to host a website inviting travelers over for a weekend stay. The guests never knew (or maybe they did, who knows) that Brian Chesky & Joe Gabbia were paying guests in a rented apartment. The aim of the entire exercise was to test traveller openness toward sharing a sub-standard (relative to hotels) yet pocket friendly accommodation. The rest is history. 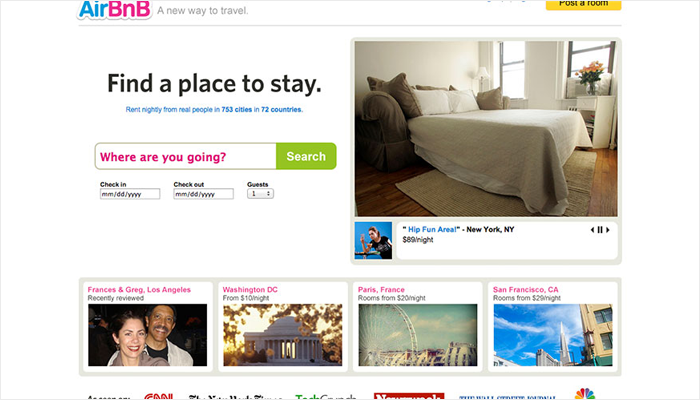 How to develop an MVP?

You’re under good patronage as we have the following pointers to help you set and achieve milestones:

Define your company hierarchy. When the key responsibility areas are laid out clearly each man/woman knows his/her thing.

Are you a couple of nerds who can code their way out of a situation? If yes, all that’s left for you to do is set the project deadline.

If you’re the visionary who doesn’t code but hypothesise business solutions, then you’d be pleased to know it’s normal to outsource mobile application development. The need to perform due diligence on your consultants can’t be overemphasized.

To save you time (‘cause that’s money remember!) here’s a primer on the top mobile app development companies.

It’s true that MVPs are out to test market viability, as the name suggests, but even they could be customized as per the target audience. Opening the MVP to everyone at once might churn valuable insight during the formative stages of in-app development. But if you’ve already profiled the end-user, half the game is won.

Such details would help you rate the content of your app to be in line with the host platform guidelines. To be honest, this part is more of surveying and studying the closest competitors but nevertheless affects the overall end result.

Functionalities are to apps what oxygen is to humans. You could have a slew of them in mind that set you apart from the competition, and yet you’re not supposed to overload first-time users. They could be easily intimidated and driven away being confused by more options they can process at once.

Do not incorporate features just because they are in (no pun intended). Make it easy to navigate, high on impact and referable. Organic marketing is free and long-lasting.

How about an MVP of an MVP? Are you confused????

We suggest you break the news of your MVP to your family and friends first. Let them get down and dirty with the app so you could have initial thoughts.

It’s better to debug issues with user reviews of a few hundred than thousands of people. You’ll end up mitigating a lot of negative press. First impressions leave an imprint hard to undo, you want yours to be memorable.

5. Make sense of the Numbers

You have the feedback you sought, now what?

It’s time to let analytics do its bit. Put the numbers in context using statistical frameworks. Ultimately this is going to be the language an investor would want you to speak.

Numbers tell a great deal of stories than more businesses anticipate. If you can harness into their relationship with user experience, then that’s the beginning of a profitable venture. 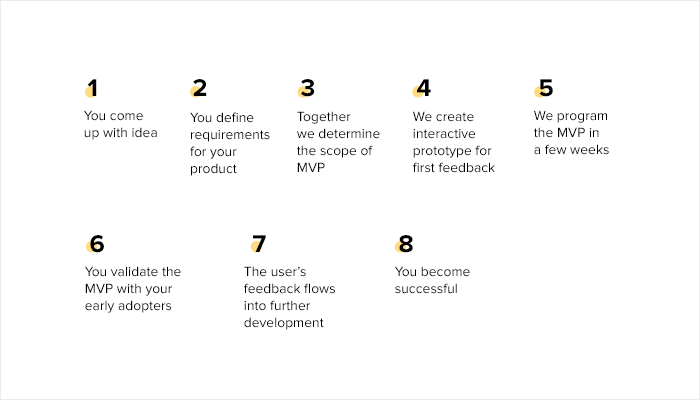 PREVIOUS How to Improve the Performance of a React Native App

NEXT What to Expect From Dating Apps in the Future?

Kotlin Vs Java: Know Which is The Best Programming Language for Android App Development?

It was a different world then. We didn’t have so much technology nor, we were fond of computers games. So, basically, it was great to live in the physical world, unlike today that is more computer-savvy. And the interests of users have also shifted into technological updates, and this serves a