A simple tutorial to help you build your app with React Native. 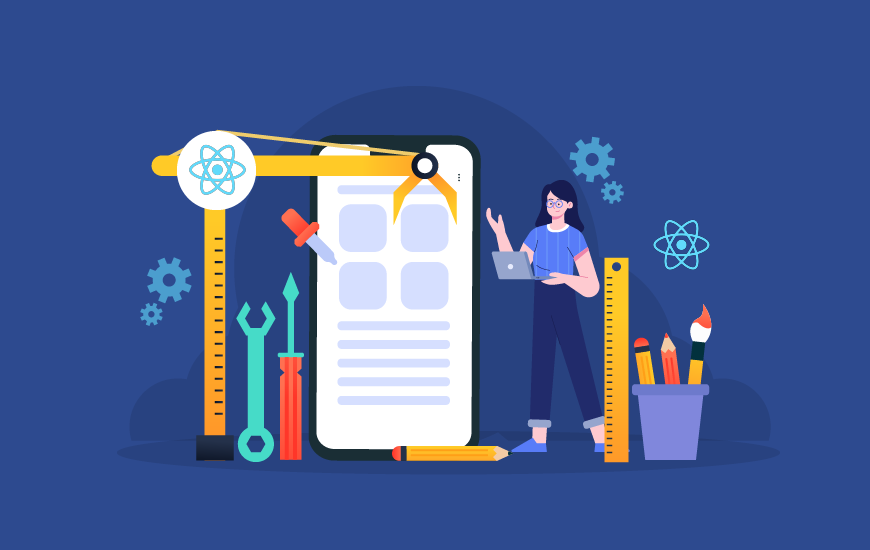 In this article, we will be teaching the basics when it comes to React Native and also further explaining how to create your first app with React Native.

This post can be very useful for those who have only used JavaScript in their coding journey. So, fasten your seat belts and get ready to learn something new.

In simple words, React Native is a JavaScript library that is used for the purpose of building and developing UI (User Interface). React Native also known as React JS is maintained by the developer’s community of Facebook.

React Native only uses JavaScript for building mobile applications but because JavaScript uses the same design as React JS. The end result gets a very rich mobile user interface from using these declarative components.

We highly encourage those to also read this React app building tutorial who do not have much experience in JavaScript as it is a brief and easy article that provides some valuable insights regarding building a React Native application. There are so many benefits of using react native for mobile app development, react native is an open-source framework that allows you to develop a mobile application.

Although it's not a mandatory step, still, we highly recommend creating a couple of sketch designs regarding your app so that you can get some sort of guidance regarding your app's aim. Creating some sketches is great as you get the rough idea of the app's flow and it also saves a lot of time.

The first and the obvious step is to install react, here is the LINK where you can download it from. When it comes to building a React Native application, there are two ways by which it can be done:

a) you can use a toolchain to build the app

b) you can move ahead without using any toolchain.

Our team of experts suggests that it is better to proceed with toolchain as it helps to smoothen out the process of app building. Let's take an example of an Expo, a toolchain that was turned into the create-react-native-app library that removes many barriers from the front-end development segment.

For today, let’s move ahead without the use of toolchain but don’t worry at the end of this article we will be sharing a few of the most popular reasons why to use React toolchains with you.

Once React is installed starting with the Folder Structure

Few terms and their functions that you need to be aware of:

Firstly, install it once globally:

You need to make sure to use Node v6 or a version after it with npm v3 or npm v4 version of Yarn. We are not asking you to use the npm v5 because of the bugs issues faced in that npm version.

Then to create an app, run:

After running the above-mentioned line of codes, a directory will be created by the name 'my-app' inside the current working directory. This will further generate the initial structure of the project inside 'my-app' so go ahead and install all its dependencies.

If you are previous experience with React Native, you will be aware of the fact that you won't be seeing any 'android' or 'ios' directories. So once the installation is complete, some commands are to be run in the project directory by you:

It will run your app in development mode with an interactive prompt and to run it without a prompt, use the '--no-interactive' flag.

If you want to view it, then open it in the Expo app on your mobile phone to view the file. And it will reload itself if you save edits to your files. With this, you can also see the build errors surfaced and log at the terminal.

It runs the JEST test runner for your tests.

It's like npm start, but this also attempts to open your app in the iOS Simulator if you're on a Mac device or have it installed.

Like npm start, this one also attempts to open your app on a connected Android device or even an emulator. But it requires an installation of Android build tools.

It will start the process of 'ejecting from Create React Native App's build scripts. And then you'll be asked a few questions about how you'd like to build your project.

Reasons to Use React Toolchains

Here are the few of the main reasons why you should use React toolchains when building an app with React Native:

We hope you liked this short and quick guide on how to build an app using React Native.

NEXT PHP Vs NodeJS: Which Platform Is Superior in 2021?

Today, we can affirmatively say that location-based apps which are also known as Geolocation apps have made its place among the top requirements. These geolocation applications can be further expanded into an array of services that act as a basic necessity for most of the mobile users.And with t

When a number of businesses are looking after every possible way to secure a mobile presence for them with an enterprise app, in the coming years, this is going to be the most contested area for mobile app development companies worldwide. If we take note of recent statistics, about 60 percent of the

IoT in Mobile App Development: How to Leverage it in Your Business [2021]

You don’t want to lag behind your competition and feel ready to jump on the IoT bandwagon? You know already that a mobile app is a quasi indispensable in building a connected ecosystem, but don’t know how to leverage its power? We have collected some tips on how a mobile app layer of sma