React Native Vs. Ionic: Detailed Comparison To Choose The Better One in 2021

Find the best one that suits your mobile app projects 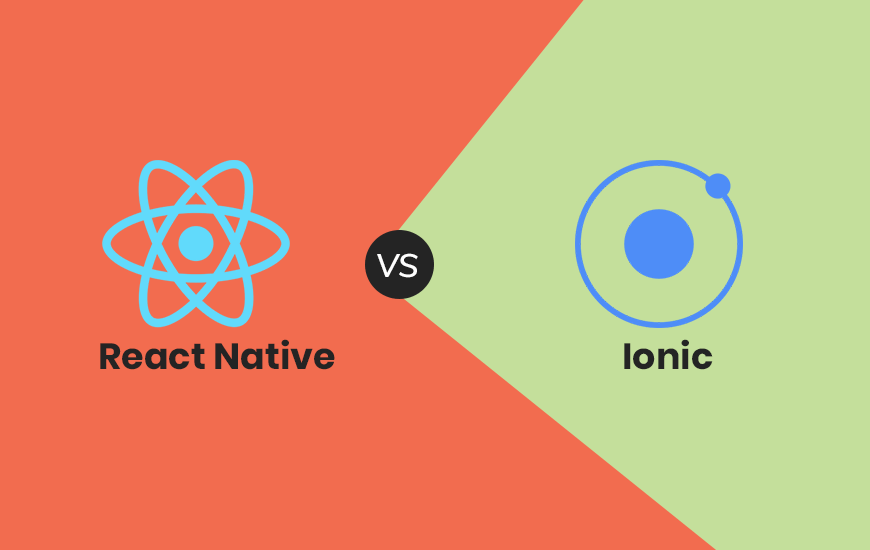 Still stuck to the Hybrid or native, Android or iOS, and React Native or Ionic question? Don't worry, we will help you in making the right decision with our expert insights on React Native vs. Ionic debate. Which framework is better for your app project and how you should make the right decision; you will find all the answers in this write-up. Let’s dive into the in-depth discussion to explore the pros and cons of both the platforms.

What Are Hybrid and Native Apps?

Before we start comparing React Native and Ionic, let us refresh our knowledge regarding Hybrid and Native apps.

These mobile apps are built according to the OS guidelines using the language required. These apps are developed under the strict technical instructions and user experience guidelines in a mature ecosystem of the operating system. Since the app is built specifically for the OS, it runs faster, and user experience is just on the point. What I mean by ‘just on the point’ is that the app leverages its native nature to become accessible and smooth for the users. Besides, the app can also directly use the device’s features (GPS, address book, camera, etc.) and other OS offerings. In short, the native mobile apps are meant to be run on the respective platform that gives the best user experience.

These apps are the WebView or website that are packed inside the native container. These apps look and feel like native apps, but up to some extent and beyond that native frame starts showing the website characteristics. Hybrid apps are built using the HTML5 and Javascript that can be run across different platforms. These apps are preferred by companies to save costs spend on the development of separate apps for individual platforms.

React Native is the framework based on React, the Javascript library that is used to develop native mobile apps. With the help of React Native, the developers can easily reuse the codes being used in any other iOS or Android app. React native is supported by a vast community of active developers and tech giants including Instagram and Facebook.

Ionic is an open-source cross-platform framework, that the developers prefer to build hybrid mobile apps. Ionic is used to develop hybrid mobile apps using web technologies with the help of Javascript and CSS. Besides, Ionic is based on HTML5 that is used with Cordova or PhoneGap to build apps. As Ionic is built using the combination of Apache Cordova and Angular and it focuses on the user interface of the app.

React Native Vs Ionic: The Comparison

Now, you know about both Ionic and React Native, so it is time to dive into the comparison on the basis of different parameters.

Talking about the technology both the React Native and Ionic frameworks based upon are entirely different approaches React native follows the “learn once and run everywhere” approach, where Ionic uses the web technologies for creating compelling apps.

React Native works under the platform's guidelines and restrictions to achieve the feel and features of a native app. React Native use the UI native components to help the developers in providing a seamless experience to the user.

On the Other hand, Ionic leverages web technologies to built multi-platforms apps. Besides, the framework uses the minimum code base for app development and it is based on Angular to provide smoother and faster process. The developers with the knowledge of Angular finds Ionic more convenient and user-friendly.

React native is the first choice of the developers looking to develop an app close to the native experience. However, React Native requires the developers to modify some of the platform-specific components to achieve the ideal results. Compared to Ionic, React Native is a more stable framework and suitable for a large-scale project. The framework works on responsiveness and UI in detail that requires a higher budget.

While Ionic is preferable for prototyping or to fulfill the urgent requirement with a hybrid approach towards the app development. Ionic uses the mobile-optimized CSS, HTML5, and Javascript components for cross-platform app developments. The ionic framework provides the environment for faster app development on the projects that are less concerned with a native feel of the app. However, there could be some errors and setbacks while using the native codes in Ionic and you are also required to download various plugins to access the native features.

React Native does not follow the write once and use everywhere logic like Ionic. React Native will suggest the developers about the logic and components which are suitable for the targeted platform. For example, while working on Android, you will get a customizable toolbar, but iOS doesn't have that much flexibility in the toolbar. So, you need to find another toolbar in React Native, or you can also separate the platform-specific logic.

On the other hand, Ionic is capable of building a hybrid app that will run the same code regardless of the platform. But, this doesn't mean that Ionic lacks on providing the native feel in its app. Ionic adopts the platform based behaviors to add native features demanded by the platform. If you built an app using Ionic, it would display the tabs at the bottom in Android and at the top in iOS as per the requirements of both the platforms’

Moreover, there is an NPM for the framework where you will find a number of relevant plugins. Along with this, there is also a plugin that provides access to PhoneGap/Cordova plugins that can be used to acquire many mature plugins belonging to the other communities.

Ionic has been in the market for a while now, so there is a fair possibility that you find the plugin for a native feature you are looking for. Besides, the Ionic community also has a marketplace where people sell and buy the plugins.

React Native Vs. Ionic: Which one to choose?

Directly coming to a conclusion and saying which one is better is not that simple. I honestly can't tell which one to use without knowing about the different factors that drive this decision in your case. The selection depends upon your project details, preference, time of the development, cost, and knowledge & skills of the assigned team. Comparing React Native and Ionic is like comparing the Xbox to PlayStation, which entirely depends upon your requirements.

However, the best thing I can tell you is that if you are looking for a low budget, and a  high-performance app in a limited period of time then Ionic is the one. On the other hand, if you are dealing with a high budget app that requires more native-like experience then React Native will be the perfect choice for your project.

If I talk about my personal opinion, I would like to go with React Native as the app needs to be fast and responsive. The native features in the app make it possible for the users to interact with the app seamlessly.

Now, as you have got the idea of how React Native is different from Ionic, you can also explore MobileAppDaily to find related blogs such as React Native vs Native. It will give you a better understanding of the technology.

PREVIOUS Google Launches an App for People With Limited Mobility

How Cloud Technology is Beneficial for App Development in 2021?

The Health sector is metamorphosing big time. This torpaedic change is aided by the influence and emergence of broadband connectivity and changing customer priorities. Healthcare services are shifting addresses from local clinics and landing directly into the pocket of anyone who can afford a smartp

A Complete Guide On Python Multithreading And Multiprocessing in 2021