Get the best of Apple and Android in one Smartphone 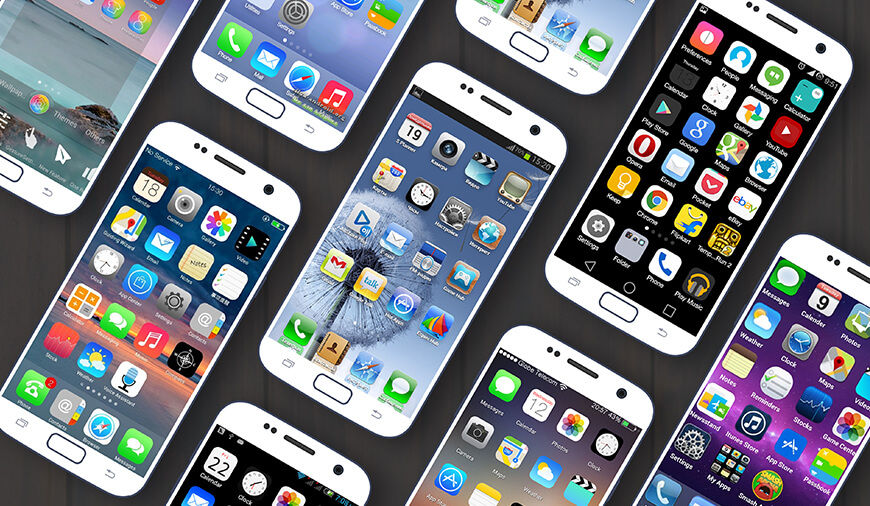 Android and iOS now account for 99.1% of the worldwide smartphone market which means when you go to buy a smartphone, the choices are either dictated by Apple or Android. The former boasts of an elegant interface while the latter offers versatility and open source OS.

Get the Best of Both world with these 10 Best Free iPhone Launchers For Android: 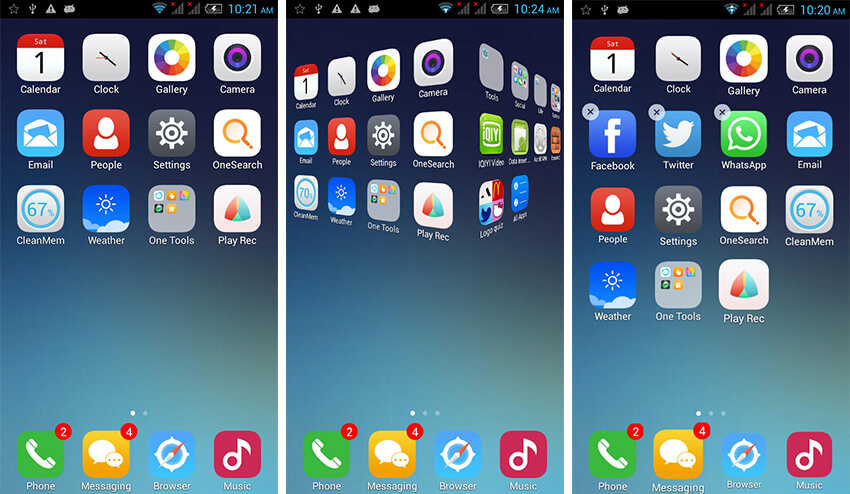 If you’re craving for a home screen launcher, that lets you experience super speedy and smooth operation, iLauncher - OS 9 is the best pick. Get rid of the app drawer, add, move and delete apps easily. You can also set up lots of gestures: swipe up, swipe down and home button actions. The app even lets you change desktop grid, customize folder preview, scroll speed, show or hide search bar and a lot more options. The UI is clear and intuitive and offers a variety of UI operations such as the Short touch on any icon in editing mode will show customization menu and Back key operates as the home key.

Unlike many others, this one doesn't have any ads at all. If you want to imitate an iOS interface, CleanUI offers everything a good launcher should entail. You can customize all icons as found on the iOS device, including the four docked at the bottom of the screen. When you slide down from the top of the screen, instead of the classic status bar from Android, you find the elegant iOS status bar. It also offers an interesting extension called iOS7/8 theme that gives a modern look.

While Android does offer a plethora of advanced features, who isn’t a fan of Apple’s polished interface in iOS? Espier Launcher brings you the best of both worlds by recreating the iOS experience on your Android device. Besides eliminating the app drawer, it offers a lot of other iOS features. A swipe up on the home screen gives you an iOS-style fast app switcher, where you can close running apps and, a swipe to the left gives you the option to access controls like brightness, Wi-Fi, volume, and other quick settings. Even the folders work exactly like they do in iOS: just drag one icon onto another to create a folder, and when you tap on it, it'll pop up in true iOS style.

Adhering to its goal - Simple is beautiful, XOS neither hogs your precious memory resources nor does it use up your CPU cycles. Besides offering a super speedy and smooth operation, the launcher for Android comes with a diverse range of 10 authentic handset themes (Apple iOS, OPPO, Vivo, XIAOMI, Huawei, LG, Samsung, etc) with more to come in near future. You can customize your home screen with smart widgets, effects, and flexible theme options. It is quite lightweight to use and allows you to quickly delete or move any app to another home screen. 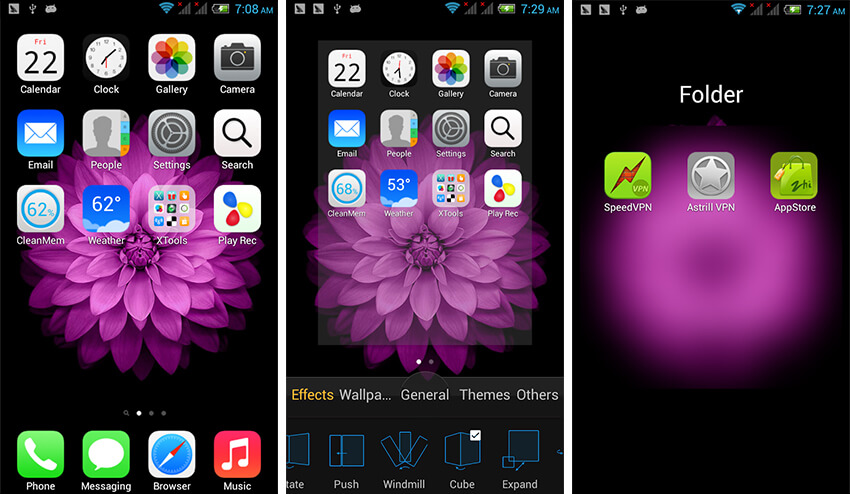 If there’s any launcher that can clone iOS experience on your Android device, its OS 10 Launcher. The system icons are replaced with iOS ones, including the non-system apps. From transitions to the app opening style, the free iPhone launcher for Android trumps most iOS aspects, right. What’s most impressive about the launcher though is its customization features that let you adjust the horizontal & vertical app counts on the home screen, app icon size, name size, color & pretty much every other aspect. 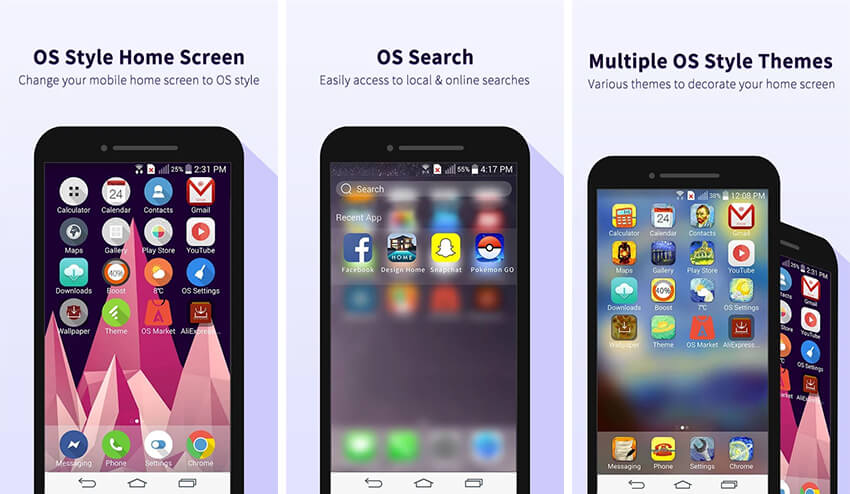 Apple’s highly popular iPhone 6 interface can now be accessed on your Android phone. Even when adhering to its nature, Android’s efficiency gets fragmented over time, 6 Plus iOS Launcher ensures that the home screen isn’t acting up with hang-ups. Furthermore, the launcher offers a plethora of beautiful wallpapers to choose from.The only downside is that the launcher is cramped with a ton of ads, which can get annoying for a lot of users.

Are you bored with Android’s user interface? Want to switch to iOS elegance? Pro 8 Launcher is the best option available for Android users. It offers a clean UI, slick design, lightweight and customizable themes. Although free, the launcher comes with no hassles-Ad-FREE and no pop-up ads. Unlike many other launchers that throw you with useless features and over fancied graphics, Pro 8 Launcher offers only the necessary and the best. Take your personalization game to a higher notch with preloaded free HD Retina-ready quality wallpapers. Although the iPhone launcher comes with a transparent wallpaper, it does not allow you to use your own photos and images as wallpapers. Perfect for privacy lovers, the launcher offers its own lock screen pin lock feature. 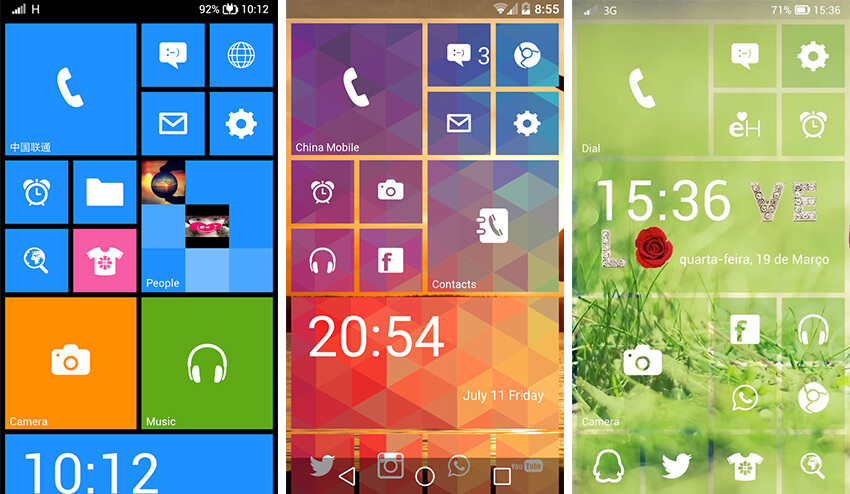 If you’re looking for OS 10 like experience on an Android device, iLauncher is one of the best iPhone launchers For Android. Its Os Theme offers multiple gestures (swipe up, swipe down) and home button actions that give you an OS 10 like experience on an Android smartphone. The iPhone launcher lets you customise pretty much everything - sizes of title, colors and icons, custom icon pack for many apps and more. You can drag and Drop tiles, and customize every title according to your need.

The iPhone launcher rids you of the app drawer so all apps are added to the desktop. As the master of personalization, the free iPhone launcher lets you change desktop grid, scroll speed & infinite scrolling, show or hide search bar, customize folder preview, and several other options. You can even setup HD OS10 wallpapers and choose the layout you want and add new widgets.

PREVIOUS Will this New Addition Rejuvenate the Dying Facebook Stories?

NEXT 10 Best Healthcare Apps for Doctor consultation anytime, anywhere in 2021

Smartphones have taken over the world by all means, and now when we have replaced our traditional ways with smartphones. With these best educational apps, learning has become easier too. Now, you do not need to pay hundreds of dollars to learn. All you need is one of the best learning apps on your s

Tracking employees’ time accurately is one of the most challenging tasks for businesses today. Many organizations have lost (and are still losing) thousands of dollars for not monitoring the exact time their employees show up and leave their premises.A study conducted by the American Payro

These days, you will come across a barrage of selfies on Facebook, Instagram, or Twitter as a large number of people love posting their selfies. Sensing this need, mobile phones are now coming with a good quality camera so that amazing pictures can be clicked even in low light, but the bitter truth

While mobile apps made communication and social interactions more accessible, video calling apps have made communications more personal. Gone are the days when one suffered in agony of know having any news of their loved ones.Best Video Chat Apps for AndroidWith these ten video chat apps for

Top 10 Healthy Lifestyle Apps To Keep You Fittest in 2021

Working out, eating fruits and vegetables, and finding time to meditate is something really hard to find in this hustling-bustling working schedules. By the time, when it is extremely tough to balance your personal and professional life, it’s essential to take out a few minutes to maintain a h