When Netflix was just beginning, Blockbuster had already dominated the market. However, Netflix survived and thrived. This guide explains how! 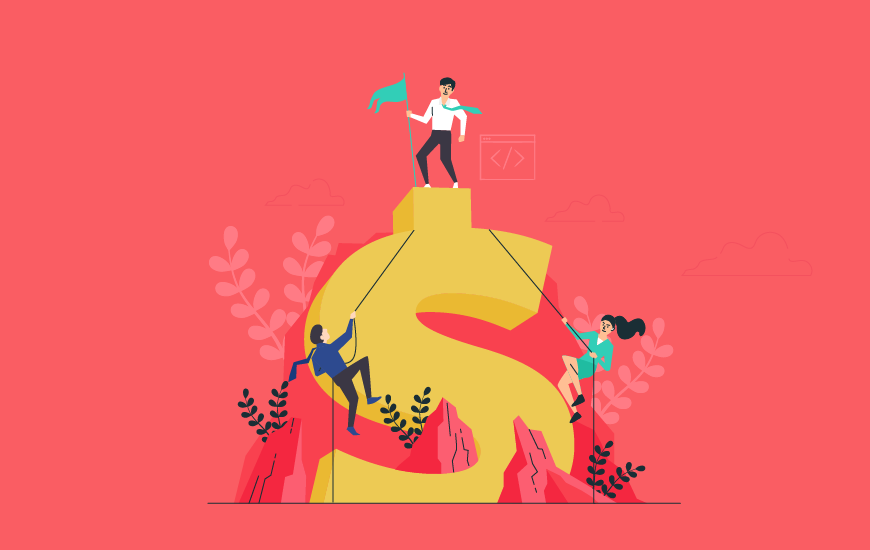 With such a horse race going between app developers to build something unique, the number of apps is boosting drastically. The main issue in the current app market is, there might be a 90% probability that the idea you have in your mind already exists. On top of that, if there’s a unique possibility rising in the market, app development giants such as Google, Microsoft, or others take it over, if that’s not done already!

However, the copying behavior is not out-of-fashion as well. Take 24-hour stories for example! Snapchat started the trend and Facebook copied it. Followed by the adaption of this feature by Instagram and WhatsApp, Snapchat lost its grip. Of course, the market coverage Snapchat had was way lesser than all these competitors. It directly resulted in reduced stock prices of Snapchat as well.

A report by Statista suggests that Snapchat is expected to reach a user population of 86.1 million by 2023. However, Instagram is way ahead with an expected user reach of 126 million within the same period. Now, what we discussed earlier, it was just to display the attacking and thriving behavior tech giants have in the industry. However, despite this hostile environment, a few smart startups, app developers, or SAAS survive and even thrive!

A few thriving mobile app startups from the modern market!

Fourdesire, a Taiwan-based game developer company, has gained a network of 27,351,207 users globally since it began its journey in 2012. In an interview with the founder of Fourdesire, Wei-Fan Chen expressed how he thought of developing a mobile game that might not only be fun but also focuses on the self-development part. Now, even though the gaming industry is pretty competitive, especially for smartphones, Fourdesire successfully grew itself by developing a few award-winning games such as To-do Adventure and Plant Nanny.

Now, the perk this best tech startup got is its factor of self-improvement. The purpose was to help people in making a better version of themselves while also having fun. As the founder of Fourdesire says, in the future, the plan is to explore more wellness topics and build more titles.

Orangesoft, another SAAS organization, can be a great addition to the list of such thriving startups, without any doubt. Started in 2011, Orangesoft as a SAAS organization is thriving under the leadership of Tatsiana Kerimova. Tatsiana, in an interview, stated, soon to complete its 10 years, the organization has managed to grow and finish over 300 projects. With a team of over 80 members, Orangesoft has partnered with brands such as Adidas, Philips, PSN Group, IKEA, and more in its lifetime. Tatsiana further mentioned how crucial it is to hire the right people with hard and soft skills.

As Tatsiana says - with the help of Big data, mobile apps and their potential is still targeted to grow. Moreover, technologies such as IoT and wearable devices have a long way to go, and Orangsoft, in the future, might offer more customized services to its clients accordingly.

Judo-strategy: A key to surviving in the market

Even though it is not guaranteed that the Judo-strategy will save you and push you on the top, it is still something modern startups are using to thrive. In short, Judo-strategy is a technique of using the strength and market size of the larger competitor against them. However, to tackle such strategies, large companies either copy your idea and tweak a little you or just push a subsidiary forward to tackle it.

Take Netscape vs Microsoft for instance. While Netscape thrived into the browser market, it had its limitations. Microsoft recognized them and used these limitations as leverages. For example, Microsoft launched attacks against Netscape in 1995. One of these attacks was using the “free, but not free” technique.

Microsoft had wealth and a near-monopoly-market. Gates and company made their web browser and Web server software free! That was a move Netscape couldn’t counter. Netscape, back then, needed revenue to rival against its competitors. Therefore, they had no crack for this judo-move of Microsoft.

Netflix vs Blockbuster: “Adapt or die!”

Blockbuster, the entertainment champion of the late 90s, had a tough grip on the market. And then came Netflix into existence in 1997. One mistake of Blockbuster back then, cost a great deal to the company. Of course, in money and market coverage, both. 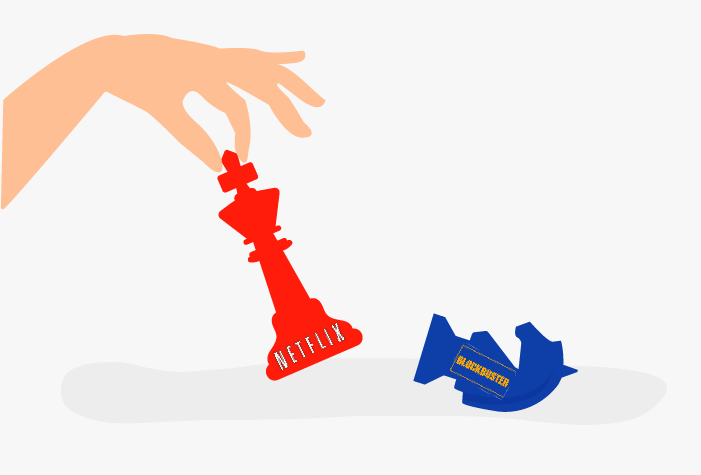 Netflix, in its early stage, wanted to make an alliance with Blockbuster instead of a rivalry. Therefore, the co-founder and CEO of Netflix Reed Hastings proposed a merger with Blockbuster. In return, he asked for $50 million for the value of Netflix and rights to run Blockbuster’s online brand. But that deal never got approved.

“But now that Reed had named a number, I saw something new, something I didn’t recognize, his earnest expression slightly unbalanced by a turning up at the corner of his mouth. It was tiny, involuntary, and vanished almost immediately. But as soon as I saw it, I knew what was happening: John Antioco was struggling not to laugh.”

Considered a small company by Antioco back then, Netflix got a whopping cash investment from Groupe Arnault of $30 million. In 1999, with this investment, Netflix released its initial subscription-based service in the market.

Ironically, Blockbuster adapted this idea eventually as well and launched their streaming platform in 2004. However, by 2006, Netflix had a network of 6.3 million users compared to 2 million subscribers of Blockbuster in the same year.

With Antioco moving on from Blockbuster in 2007, the online presence of Blockbuster lost the focus it had from the company. On the other hand, Netflix kept tackling opportunities and signed a significant deal with Starz. As per the deal, Netflix got rights to 1,000 movies and shows for users to stream.

“Play by the rules, but be ferocious.” – Phil Knight

The market is led by visionaries and risk-takers. If you pick growing and leading organizations as examples, you will find one thing common; Vision. Take Fourdesire as an example. A simple vision of helping users through games is leading the organization towards continuous growth even in the modern mobile game market, which is super competitive.

Now, if we talk about the mobile app market, the competition varies due to not one but many factors. And suppose if you consider all factors such as the target platform, OS, mobile app development technology, UI and UX designs, and more, your idea needs protection as well, especially, if you are a startup. Therefore, the trick is to have a strategy ready to counter large organizations when they come for you. Or, to go with an alliance. The choice is yours!

iOS 11 is ranked among the world’s most advanced mobile operating system. The OS can take any challenge head-on and promises to rank in the top. Like every other update, iOS 11.4 has brought new features into the armory. The introduction of augmented reality and ClassKit support has taken iOS

Developing an app might sound like a team of developers working round the clock in a crowded office, coupled with sleepless nights and the huge investment of money. Maybe that was true a decade ago, but now tables have turned completely.With the unprecedented boom and innovations in the tech ind

How To Hire The Best App Developers? A Comprehensive Checklist for 2021

Practice Coding in a Fun Way With These Best Coding Games

With boosting requirements of coding-based products and services, the need for expertise coding has boosted as well. And, the expertise comes with the practice, as we all know it. Now, the question is, how can we practice enough when many things become hurdles. Take boredom as an example. Too much c