Most Popular App Categories in the Mainstream Market

As of August 2020, shopping apps had a retention rate of 33.7 percent in 30 days among all most popular app categories 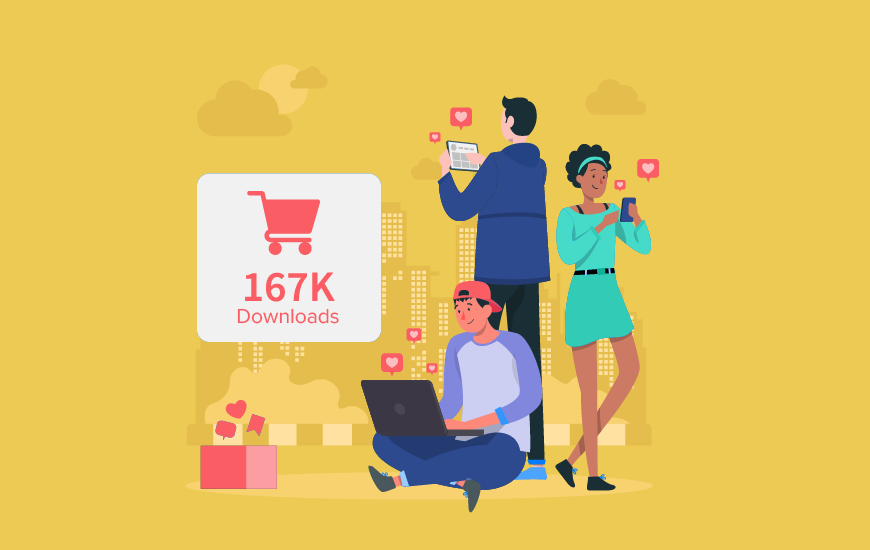 Today, with the increased adoption of smartphones, many market segments have started using mobile apps. The reason behind such increasing popularity is the expanding opportunities mobile apps come with. Now, if we specifically focus on the most popular mobile apps, gaming apps had the majority of downloads from the Apple App Store in the previous year.

According to Statista, in August 2020, the gaming apps category had dominated the app store with a share of 21.86 percent. Currently, 1.96 million mobile apps are existing on the Apple App Store. Whereas, the average iOS app price was $1.02 per app.

In this blog, we are discussing the top app categories that had dominated the Google Play Store and Apple App Store for quite some time. To support these facts, we will also have a look at a few important statistics. If you are planning to participate in the race of popular apps, you should check out the rest of the blog!

To support the information mentioned further for top app categories, let’s have a look at a few statistics for categories of apps. These facts are mentioned to give you an idea of the current app market trends. 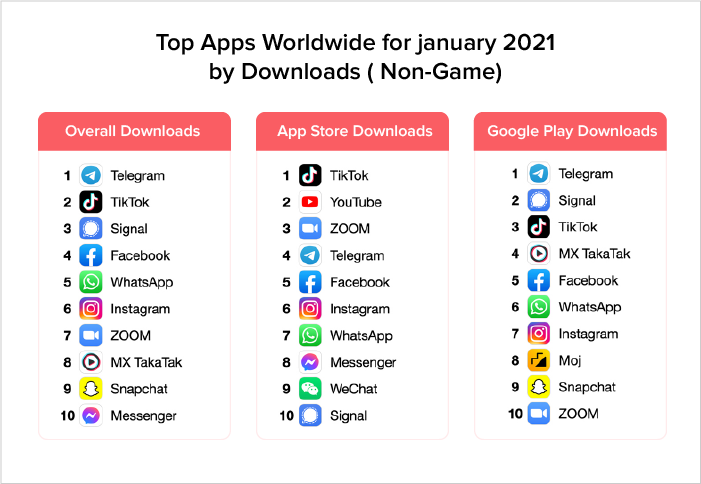 Mobile application categories that are conquering the market

Now, you must have had the idea that gaming apps are leading the market for quite some time now. However, these trends might change with time and technology evolution. Moving further, we will discuss categories that are currently dominating the app market and can be useful for developers to grow. 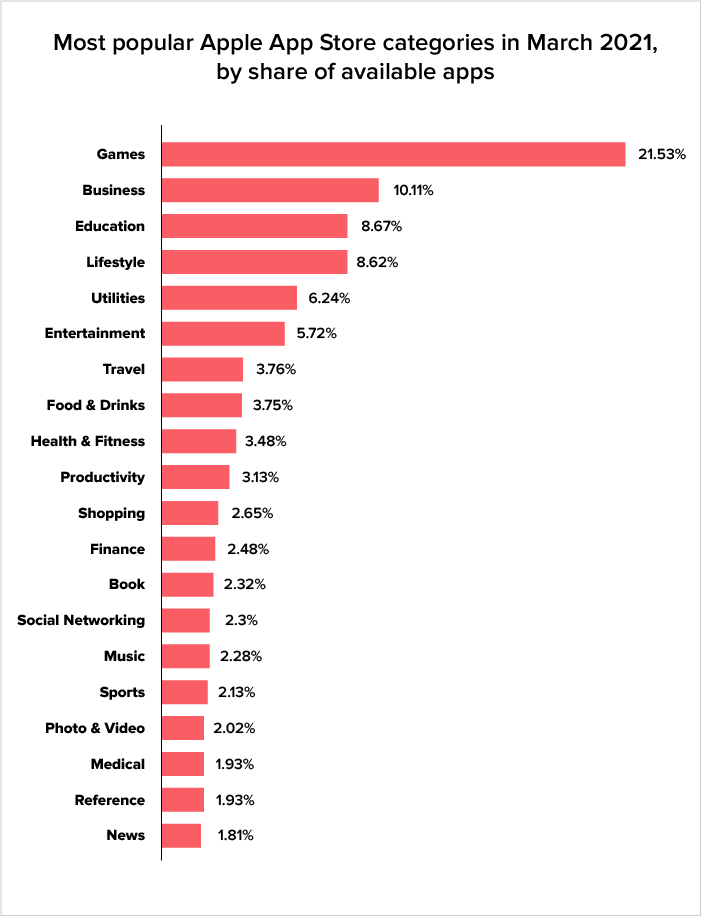 PUBG Mobile was released on February 09, 2018, for Android and iOS devices. Since then, as the report by Sensor Tower states, the game was downloaded 734 million times.

Another fun fact reported by Udonis says casual games had a market share of 58.86 percent in 2020. Moreover, Puzzle and Arcade games followed closely with 56.5 and 55.08 percent respectively. If we take demographic criteria as the basis, Mediakix says 37 percent of mobile gamers are men and 63 percent are women. This report is based on the data given for 2019.

When the global lockdown jailed everyone into their homes, businesses evolved. Therefore, the need for business apps is boosting since then. If we pick Zoom as an example, a stats by Sensor Tower says, Zoom surpassed 300 million downloads within the second quarter of 2020 and became one of the most popular mobile apps.

The basic purpose of the business apps was to make remote working easier. Therefore, some other apps such as Skype, Google Meet, Google Docs among others saw good growth as well. And now, when the world is familiar with the remote working concept, business apps have a golden opportunity to grow and adopt this new trend. 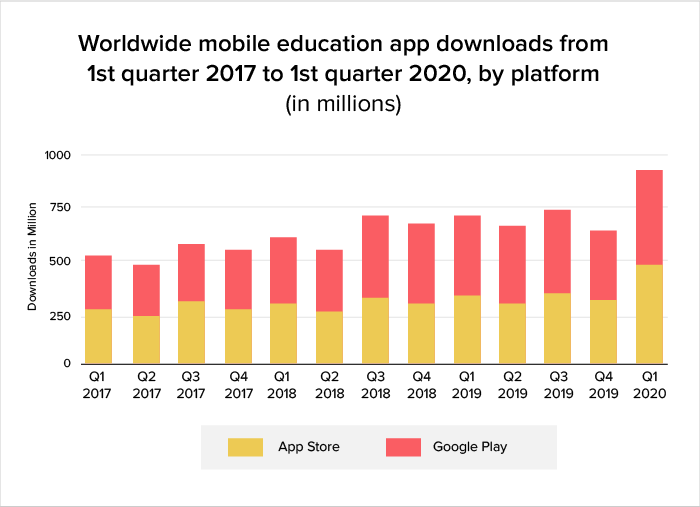 Education has multiple types of mobile apps serving various purposes such as music learning, exam preparation, study, puzzle gaming, and others. The education segment was one of the most downloaded app categories. Now, to give an example, we can talk about a few statistics here.

Think With Google says that educational apps search keywords such as “guitar learning app” and “K-12 learning app” saw a boost of 80 percent in search results. Moreover, the first quarter of 2020 saw a surge in the number of educational app downloads. According to Statista, 466 million and 470 million educational apps were downloaded from the Google Play Store and Apple App Store, respectively.

Research done by Global Digital Traveler Research in 2018 says that 61 percent of users from the US used smartphones to book and pay for the trip. Now, the lifestyle segment is huge. Apart from traveling, it includes shopping apps, fitness apps, and many more. If we breakdown specific statistics, we can get the latest idea of market trends for types of apps falling under the Lifestyle category.

Among all types of applications, Entertainment apps have the majority of the popularity if we leave gaming apps. Types of mobile apps such as music apps, video streaming apps, reading apps, and radio apps among others had seen a boost in usage during Covid.

Before we wind up the blog, it will be beneficial to understand a few types of applications as well. The app development process is segregated into a few categories such as Hybrid app development, Native apps, and Web apps.

Among all popular app categories, advantages of hybrid apps stand on the top. In other words, apps that can be used on iOS, Android, and Windows with a single set of codes are called hybrid apps. Modern developers are using hybrid apps as the development process is less costly, and it requires fewer maintenance efforts as well.

Mobile web applications require internet and cloud storage to function. These applications are mainly used to make them useful for cross-device usage. Users love web apps as they do not have to lose the data, if they want to use it on multiple devices. Moreover, web applications are used as they are more scalable compared to their alternatives.

Moving further, we hope that the blog was useful for you. But before ending the blog, let’s have a revision of the information for the different app categories we discussed above:

These statistics and facts for mobile application categories can be helpful for you from the perspective of a business owner or a web developer. As the app market is booming, opportunities in various categories of applications are evolving as well.

PREVIOUS Importance Of Adding Geolocation To Your Mobile Application in 2022

NEXT Which One To Choose in 2021: Mobile App Vs Mobile Website?

Mobile App Marketing And How It Has Changed: #10YearChallenge

Almost every person today relies on a mobile device to perform some of the most important tasks in life. Many of these tasks such as scanning documents, making presentations, purchasing tickets, editing pictures and videos, and voice recording cannot be achieved without a mobile app.Every mobile

How To Gain Maximum User Engagement On Instagram With IGTV?

Instagram is one of the most popular social media platforms and IGTV is its long-form video feature. The IGTV is a platform on which Instagram has invested a lot of time, as well as resources. And why not? Videos have proven to be a great mode of user engagement, even better than pictures and text.

Things You Can Learn From Celebrity Mobile Apps [2021]

Ever since the 'Kim Kardashian: Hollywood' made its debut in the app stores, back in the year 2014, a revolution started. This celebrity app revolution was from the result of the smashing success that Kim Kardashian received and shortly after other celebrities followed suit. At that

Bootstrapping vs Venture Capital - The Right Funding Strategy for Your Business

For aspiring entrepreneurs, planning and arranging funds is one of the most crucial issues that become the hurdle between them and their dreams. Even in the modern world, where angel investors or startup loans have become a common topic, it can be quite difficult to figure out what funding options a