Most prominent JavaScript Framework for mobile and desktop app, unveiled its latest version of Angular 8 with fascinating features. 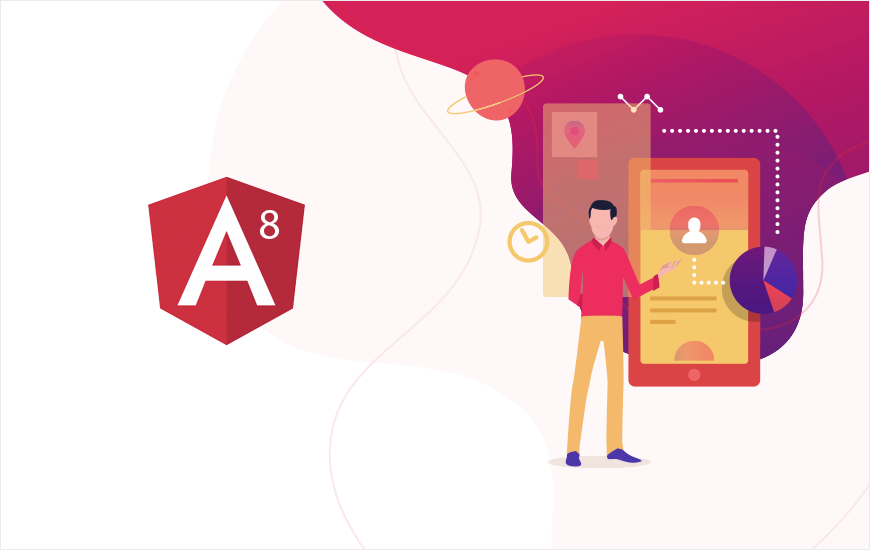 Angular 8 is here! So what do you expect from this most recent version of the open-source app development framework?

Before moving towards gaining an insight into Angular 8 features, let’s help you understand the basic concept of Angular and AngularJS.

Angular is also referred to as AngularJS or Angular.js is an open-source desktop and mobile framework for handling the front-end app development process. This javascript-based framework was originally developed as a complete tool and praised for allowing developers and designers to interact with both front-end and back-end modes of an application.

It’s being widely utilized by today’s smart developers to create not only interactive but also technically sound apps that perform in the long run for the clients’ business success.

Angular was first developed as AngularJS which was launched in 2009 to help developers handle the downfalls of HTML. Gradually, it has become the best open-source framework known for creating single-page applications. There’s as such no Angularjs version history after the launch of Angular 2, the versions are usually called the successors of Angular. For example, Angular 4.0, Angular 5.0 and so on.

The development industry has been tremendously utilizing Angular 7 on a large scale. This JavaScript framework also provides dependency injection, which is certainly useful for assembling the data services for different applications. And it does this all by using the HTML template which is used to compose components.

Unlike AngularJS, angular also allows developers to compose components with a definite HTML component that seamlessly connects to TypeScript code running for imperative parts of the program. But with the introduction of Angular 8, things have become far easier as developers can seamlessly integrate and manage the single-page mobile app development process in a go.

Let’s dive deep into the battle of Angular Vs AngularJS.

Difference Between AngularJS and Angular

By going through the above definition and difference table, you must have got an idea about what Angular and Angularjs actually are. Keeping the basic aspects in mind, we would like you to proceed with the latest Angular 8 and its unprecedented features updates.

So far, developers have not been completely habitual of using angular 7 for their projects and here comes another Angular version update for the same i.e., Angular 8. Yes, we are talking about Angular's latest version (Angular 8.0) which is almost here to surprise developers with its amazing functional updates.

It’s really like another one of the best Angular milestones achieved by the development community. Come along and know the best features of Angular 8 with all its prominent performance improvements.

In comparison to the Angularjs current version or you can say the previous angular version (Angular 7), Angular 8 has come up with a lot of functional updates and performance advancement. Developers can now look forward to utilizing this Angular latest version to create modern-gen applications combined with CLI APIs web worker support, differential loading, and many other functions.

This has become a major Angular upgrade that covers the framework along with its material design concepts. This is not the end, rather the update is still improving in terms of app loading speed on all the major browsers. 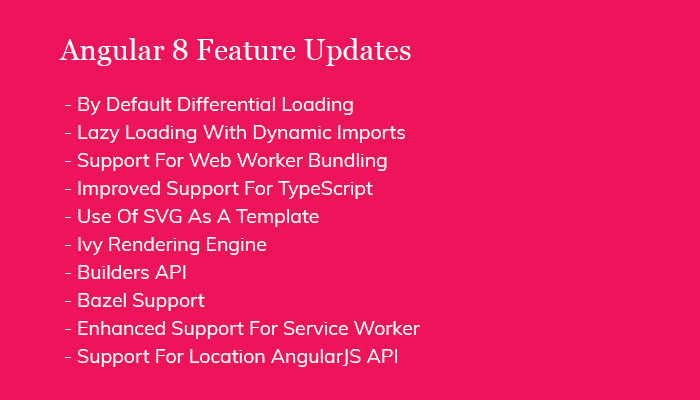 At the time of building applications, Angular will create a separate bundle of polyfills which completely depends on your browser list file. This will lead you to the process below: 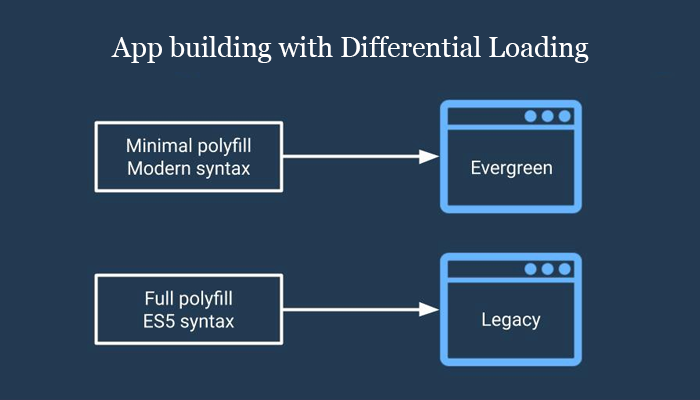 Angular 8 is being introduced with this amazing feature which decreases the bundle size and helps developers build highly compressed applications.

The feature works by building additional files with polyfills that are precisely injected through nomodule attributes.

You can take a look at the semantic coding through below coding example: 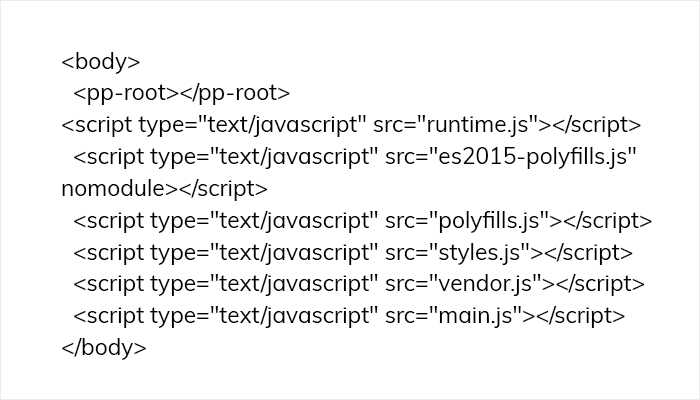 The feature of Lazy loading is custom and was built for the developers' toolkit since the birth of Angular. With the Angular latest version, this feature has completely being deprecating the loadChildren:string syntax which so far supports to load the application modules lazily.

Web worker in this latest Angular version is being added as the best alternatives when you’re into CPU-intensive tasks. This feature speed-up the application performance along with improving parallelizability. Web workers perform by writing the code off the main application thread and offload it to a separate background thread.

Angular 8.0 is in the market which also welcomed TypeScript 3.4 and allows updating the application’s TypeScript version without trouble and failing.

This angular version feature is known as the update of dependencies which provides an excellent way to synchronize it with the current ecosystem. This feature also ensured greater benefits when developers wish to generate easily readable and clean JavaScript codes.

5. Use of SVG as a Template

With Angular 8, developers can now use SVG files as a template. Earlier, they only had the access or option to use inline HTML or external HTML syntax as a template. It’s the best feature that app builders can utilize to save a lot of time and effort.

Ivy is basically the prime feature of this latest Angular version release. This feature is still in the experimental phase and if anyone wants to use it in an application, he can use it with enable-ivy flag set to true. Right now, it’s not fully functional but, yes one can use it to improve View Engine functionality.

One can enable Ivy by in an existing project by setting enableIvy option in the angularCompilerOptions in the project’s tsconfig.app.json.

Further, you can create a new app with a new Engine by using the below syntax.

You will get various advantages by using Ivy, like:

This new version of the Angular framework allows developers to use Builders API, which is also known as Architect API. Here, Angular 8 uses builders for a few main operations like:
serve, build, test, lint, and e2e. The best part is that you can see the builders used in your angular.json file.

With Angular 8.0, it’s now possible to create a CLI application easily and precisely. It’s because Bazel is here with a new Angular version update. This feature was developed and used by Google to build a tool that can function with different language inputs.

You can add Bazel support by using the given command line.

Creating a new app has now become easier with Bazels. Use the code below to get it right.

Benefits of introducting of Bazel support in the latest Angular update:

It was all about the latest Angular version 8 and its groundbreaking feature updates.

Let’s move to the next section of the article which is Angular 7 and prominence across the development market.

Angular 7 has been broadly used by developers to develop single-page robust applications. It’s the Angular last version that has become the best framework that has created an extended niche for offering technically-sound and robust apps.

However, both the Angular versions 7 and 8 have many similar features, the only difference is that there are a few updates that have been made to ensure better product performance in the long run.

Angular 7 is in the demand and it’s expanding to the entire platform including:

Different functions are added to the Angular 7 that are described below:

How to Update From Angular 7 to Angular 8?

Like always, updating Angular from a previous version to the updated one is quite easy and followed by simple steps. Here’s how you can do it seamlessly:

As Angular developers are habitual of incorporating the latest mobile app development trends along with regular version updates, they usually update or migrate the Angular latest version by running a single line command. It automatically migrates the lazy load route imports to a new import syntax.

Use it and start migrating the older Angular to the latest version.

Besides, you should also keep a few points in mind to carry out the Angular update from version 7 to 8.

Moreover, if you want to update your application with the Angular Material, you have to run the below command appropriately.

Note: If you’re using a version older than Angular 7, you have to out a few extra efforts to migrate to the latest one. Follow the guide for appropriate Angular update.

You can have detailed information about all these Angular previous versions on different reliable sources.

The latest addition of features is amazing and is ready to hit the application development grounds by their exceptional functioning potential. You should update your previous Angular version with the Angular latest version. Angular 8 has started attaining prominence, this is the reason we’re emphasizing on upgrading to Angular 8.

Angular JS is quite often compared to react JS, and hence, it's essential for the developers to know the difference between the two.

The area of application development is really wide but still, you can cover the most happening mobile world news by subscribing to MobileAppDaily.

NEXT Importance of Integrating Mobile Apps With Wearables

One of the most widely used structured frameworks is AngularJS which is mainly used to build highly dynamic single page applications. The AngularJS framework was first introduced in the years 2012 by Google itself which also provided it a huge support of a multinational corporate backing up it.T