How to Build a Blockchain Application for Android and iOS Platforms?

If you are hunting for answers to the question “how to build a blockchain application?”, then you have finally found the right blog. Read this blog until the end to find some crucial facts that can help you throughout the development process! 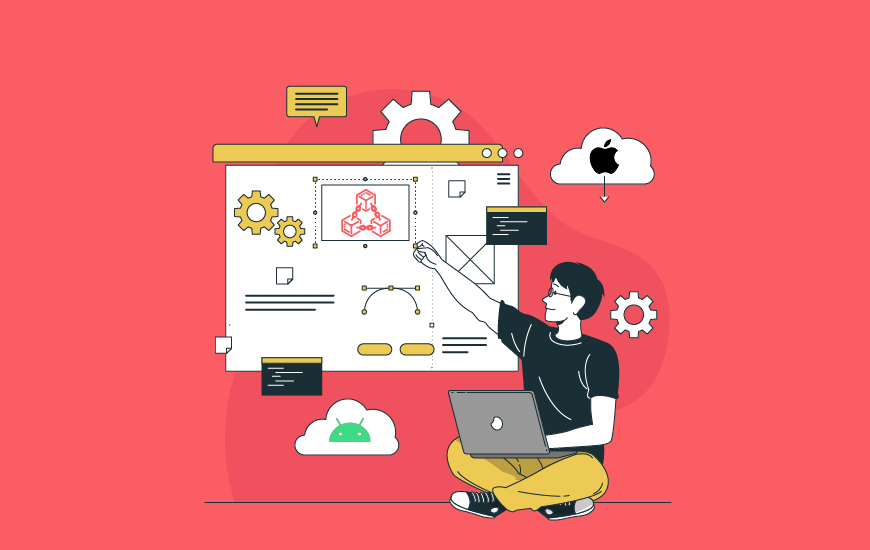 Blockchain trends are taking over multiple industries due to their security and transparency features. From securing healthcare data with blockchain to making the financial processes safer and more efficient, the technology is contributing enormously across the globe. Now, some common examples of blockchain are smart contracts, decentralized applications, decentralized servers, cryptocurrencies, Non-fungible Tokens (NFTs), etc. But in this blog, we are mainly focusing on the creation of decentralized apps built using blockchain technology for Android and iOS platforms.

A properly built blockchain mobile app can provide a decentralized solution that minimizes the number of middlemen, promotes transparency, and assures data security while also preventing illegal access. As a result, while designing a blockchain mobile app architecture for Android and iOS, this technology can be used in place of the traditional base. In this blog, we are focusing on a few steps that can answer the question “how to build a blockchain application?”.

Before you begin designing your application, you must first consider an idea, just like you would with any other product. At the same time, you must be certain that a blockchain is truly required before implementing it. So, if you want to make a mobile video game, a torrent client, an online magazine, an aggregator, or whatever, you won't need the blockchain because it offers no advantages over the traditional approach. The following scenarios will benefit from blockchain technology:

After you've decided if you want to develop blockchain applications, the following step is to find a developer. You'll need a technical partner because, unlike WordPress sites, building a mobile app on the blockchain using templates will not work. Blockchain necessitates specific expertise and skills, as well as a 15-30% general price increase.

The next step in blockchain app development for iOS and Android is to choose which blockchain network to build your product on. The decision must be based on the properties you require.

The following are a few of the most common choices among developers:

The process of blockchain Android app development or iOS blockchain development is comparable to that of constructing a house. Before you begin laying the foundation, you must first create an architectural plan that will show you what type of house you will be building and what materials you will use. Your application's framework is the same architectural blueprint that you'll utilize to create your software product.

Frameworks reflect a program's core structure, appearance, user route, and approximate appearance of application screens, among other things. Developers can use such a scheme to figure out what features they need to add and how long it will take them to do so, which helps them budget for the project. To understand “how to create a blockchain app?” properly, here are two crucial steps you need to understand -

After you've built the framework, you can start designing an appealing user experience for your blockchain application. This is a crucial stage because it determines how the user perceives the interface: nice colors, easy-to-use icons, and seamless transitions between displays.

Or vice versa: it's unclear what to do and how to do it, there are small icons that can't be clicked, and a toxic color scheme.

At this point, designers should perform the following:

With the surge in interest in blockchain over the last year, many businesses have begun to invest in these digital solutions. However, the industry is difficult and complex; not everyone is capable of developing a well-thought-out app that will help improve the world with cutting-edge technology. If blockchain sounds interesting to you, maybe investing in crypto will also prove compelling. If so, head over to CEX.IO and get yourself some cryptocurrency.

In the end, hopefully, this guide on creating blockchain apps for Android and iOS users was helpful and answered questions such as “how to build a blockchain app?”. We created this guide for businesses and blockchain app development companies that want to develop dApps but don't know where to begin. You can also visit MobileAppDaily to stay updated with the latest trends from the app development industry across the world.

NEXT How to Build a Mobile Banking App in 2022: Challenges and Steps

To process virtual currencies is undoubtedly a profitable business, but due to its non-compliance with various regulatory policies, the government of different countries has declined to accept it. And following the same lines, the Google Play Store also updated its privacy policies to debar such app