Over 900 Dapps were launched in 2018 using Ethereum, among them, gaming apps hold a hefty 60% share of the market. 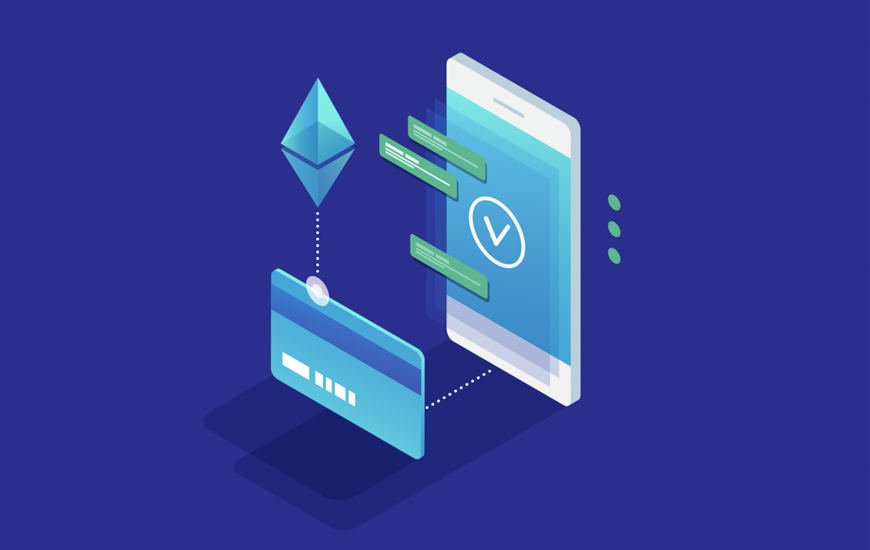 The tech sector today is evolving at an overwhelming rate: with new trends appearing each day, keeping your hand on the pulse can be quite challenging.

Dapp, a.k.a. decentralized application is yet another buzzword reflecting the popular trend. So what exactly are dapps, and how are they different from mobile apps that have gone mainstream a while ago? More specifically, how can you use dapps to increase your business value?

This article will dispel some misconceptions about what dapps really are. Here, you can examine the benefits of dapps as compared to regular mobile apps and explore some of the most popular tools and technologies for decentralized application development. If you want to get Dapps development, you can hire the reliable decentralized app development company on-board.

Unlike regular mobile apps that rely on a standalone computer or a cloud server, decentralized applications use an entire peer-to-peer (P2P) network to run their backend code.

It is a popular misconception to attribute the emergence of dapps to blockchain: they may or may not run on a blockchain network and some of the popular apps we know actually don’t. For example, BitTorrent or BitMessage.

However, most of the current dapps on the market use blockchain and smart contracts, so here I will focus mainly on dapps that are blockchain-based.

The number of blockchain-enabled dapps is quickly increasing; most of them are the apps, powered by Ethehreum, EOS, POA, GoChain, and Steam blockchains.

As estimated in 2019, their number has reached 2,432, with about 180 new dapps being released each month. Interestingly enough, about 105 of these new apps are built on Ethereum blockchain, which boasts the largest developer community.

Actual users, though, prefer the EOS network, despite the fact that it doesn’t host that many developers. More specifically, EOS outnumbers Ethereum in terms of dapp users by threefold.

The largest dapp category is games (about 60%), which should come as no surprise, has given the hype around last year blockbuster CryptoKitties. So far, there are 478 dapp games out there with the number of uses exceeding 29,000. The most popular category is, however, data storage, with projects like StorJand X Cloud attracting 106,420 users monthly.

Secondly, you’ll find that the highest ranked dapp belongs to yet another category: the social blogging platform Steemit based on Steam blockchain.

Let’s now examine how dapps are different from conventional applications.

How Dapps Are Different From Mobile Apps?

Dapps relies on a P2P network to host its backend modules, which sets them apart from regular apps that normally use a single server. So how does that translate into specific dapps features? 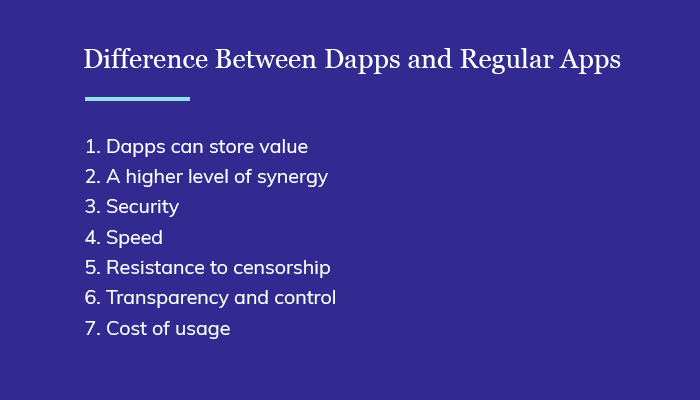 One of the most outstanding features of dapps is its capability to store value. Dapps can store cryptocurrency and later hand it out to users after the contract conditions have been fulfilled.

Traditional apps have to use a trusted third party to secure financial transactions. Dapps eliminate the need for such a third party since they allow to store value directly inside the app.

2. A higher level of synergy

Dapps integrate with each other easily; in fact, their synergetic possibilities are way higher than those of conventional apps. To some extent, all of the apps on the blockchain are inter-compatible.

An app called Digix, for example, is digitizing gold by putting it on the blockchain in the form of tokens with fractional ownership. These DGX tokens can easily be integrated into other dapps such as Augur, Rex, and WeTrust. The procedure is so simple, it doesn’t even require any specific Digix permission.

Security in dapps is of paramount importance. Because decentralized apps, essentially, have a public backend, any suspicious activity should be carefully monitored and restricted.

Just how secure dapps really remain an open question since the 2016 DAO scam. DAO, one of the most expensive dapps in history, was ripped off over $50 million in Ether currency. This stresses the fact that the security standards applied to dapps still need refinement.

Dapps are notoriously slow, which is frustrating. Ethereum network, for example, can only process about 15 transactions per second. This limits the number of users that can use it simultaneously. Moreover, these transactions are sent in blocks and there is no guarantee yours will be included.

Ethereum creators are now trying to handle the problem and introduce some radical improvements. Hopefully, we will soon see a blockchain that can scale to process up to 10,000 transactions at a time. The solution is still in the works, though.

This is one of the most groundbreaking features of dapps that is extremely hard to remove.

"Once you put an app on the network it’s there forever along with all its data (unless thousands of blockchain users unanimously agree to remove it). You may even get sued for its content, but the content itself will remain there."

Another implication of dapps being an irremovable public ledger is the fact that they let users execute more control over the stored data. Every dapp's operation is recorded in the blockchain and cannot be removed. Every bit of generated data is also stored in the blockchain.

Users have to pay a small fee every time they use a dapp. This fee is a courtesy to the owners of multiple nodes which constitute a network. The more complicated the distributed application is, the larger is the fee users have to pay.

However, dapp users generally believe the fee is a fair trade off for transparency and control provided by the blockchain.

What sets dapps apart from regular apps in terms of development cost is that there’s no need to pay cloud fees or include on-prem server support expenses, since the app backend code will be distributed between the nodes of a P2P network. In other words, the dapp costs will include:

It will exclude cloud server fees or any maintenance fees whatsoever. A low complexity distributed application (usually a payment app developed around existing crypto-currencies requiring basic smart-contract development) could cost you around $15,000 to $35,000. A cost of a full-fledged blockchain platform with complete decentralization would start at around $120,000.

Technologies and Tools For Dapp Development

To build dapps, developers use smart contract programming languages. Some of them are equally applied in traditional app development (Java, C#, C++, JavaScript, SQL, Golang), while some have emerged specifically for blockchain development (Solidity, Ethereum, Bitcoin Script and a number of others).

Because dapps use smart contracts to connect to the blockchain, their architecture is quite different, since dapp's open-source backend code resides on the nodes of a distributed network, as opposed to apps running on centralized servers. Thus, the dapp development process is also significantly different from building conventional apps.

As said above, the app complexity will impact the fees imposed on end users, so devs that can write a clean and simple code are in high demand.

When Dapps Are Better Than Apps And Vice Versa

Decentralized applications, as well as blockchains they run on, are still in their infancy. While devs can easily submit their freshly built dapps to platforms like Dapp.com, the number of their users is still significantly lower than the number of users of conventional mobile apps.

In terms of usability and scalability dapps still have a number of limitations, besides, users also have to gain more understanding about the elements of blockchain ecosystem such as wallets, tokens, etc.

To wrap up, here’s when dapps are probably your best choice. Use dapps when you need to ensure complete transparency of all transactions and grant users full control and ownership of their data and assets.

Dapps are meant for projects requiring a high level of user trust, such as, for example, b2b and b2c platforms for customer/seller transactions. If your main focus is usability and agility, it’s best to stick with regular mobile apps.

Get in touch with MobileAppDaily, if you wish to have a hoard of information about Bitcoin and Blockchain-based mobile apps.

PREVIOUS How Mobile Wallets Contribute to the Convenience of Merchants and Customers?

NEXT Top Common Mistakes To Avoid Before And After App Launch