From Programming Languages to Technologies, these web skills are crucial for developers in 2020 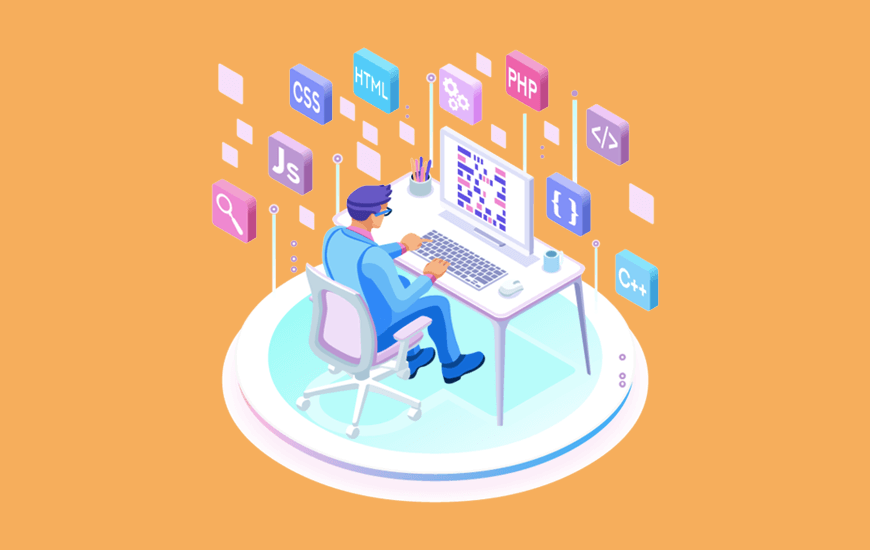 When it comes to web application development skills, the scope is progressive in nature and there is always a chance to upgrade. The same is the case with programming languages and other technologies. And that’s one of the main reasons why our team at MobileAppDaily has decided to write about this topic.

So in this article, we will be focusing on some of the most essential programming languages for mobile development, web developer skills and various other technologies for the year 2020 that every software or app developer should be aware of. Let’s just start covering this section one by one.

Nowadays, Hybrid mobile application development is another process that is gaining popularity, with frameworks including Xamarin, Ionic etc. that are being utilized for the cross-platform app development. In addition to this, there are also progressive Web-based applications that are based on browser technologies, which are also referred to as the new wave of cross-platform apps by a number of experts in the mobile app industry.

For instance, there is another side to the skills that are crucial for web developers and the field of mobile app development utilizes many other platforms to grow continuously, for example, the mobile app developers are highly in demand for major application platforms such as iOS and Android here, the Apple App Store and Google Play Store.

Front-end development is about mainly for presenting the software clearly but from a UX (User Experience) perspective, which is further helped by designing. Today, there are plenty of software types that are being developed on the concept of web-based, that also indicates that the need for front-end development skills is not going anytime in the upcoming years.

The above-mentioned skills focused on the technical aspects but there are other important skills as well that require equal attention such as software engineering methodology skills. Yes, there is much more than frameworks and programming languages which involve the complete view of the software engineering process. 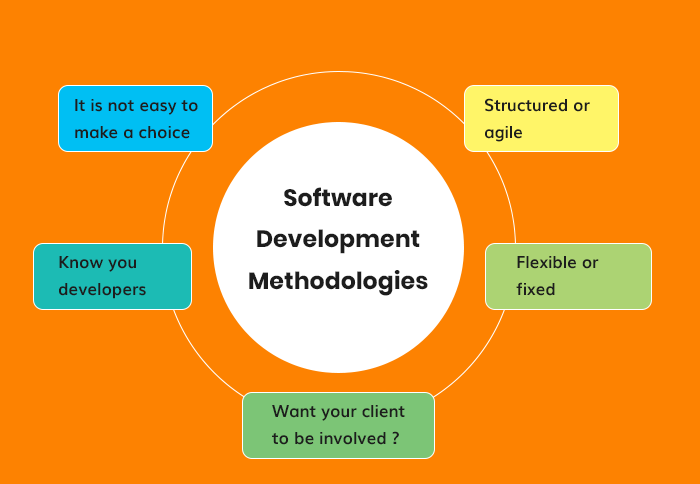 The above image showcases the main things that a developer needs to consider when finalizing a software development methodology.

The problem-solving skills are considered a hidden talent that can act as a boon for the career of the front-end and back-end application developers. It has also been claimed by some well-known experts that software developers problem solvers at heart. For instance, they enjoy seeing a tricky situation and trying to find the best possible outcome within a number of steps.

According to a senior data engineer, problem-solving skills are one of the key requirements for any developer, “Today anyone can learn to program easily, but only a few programmers have a successful career. The reason is that they lack the basic needed skills to solve a problem in a pragmatic manner.

Skills like agile teamwork skills and product development skills are also of great importance as soft skills like communication skills, adaptability, nature and spirit of teamwork act as basic fundamentals. Nowadays you may have noticed that the majority of workplaces are opting for agile methodologies.

This is mainly because as a company it is crucial to have the discipline of test-driven development along with a clear understanding of the value of code and the concept of overall design. Also if you are someone who is looking for a long-term career in the sector of cybersecurity, then there are even certain skills that hold mandatory requirements in the field.

The reason is that these programming languages act as a solid foundation base for a number of software and applications that can be built upon them. But it has also been stated by programming experts that choosing a language can also depend on the area you are working on. For example, this need may vary from startups to small and medium-sized businesses as well as enterprises.

Technologies To Know in 2020

If you are a software or web developer and want to be named among the best ones then that means that you also need to be certified in some specialized skills as well as technologies. So apart from skills in programming languages like Java, Python, JavaScript, C# etc, there are other emerging skills that are gaining popularity, for example, Amazon AWS and React.js.

These are some of the latest technologies that are currently being driven by leading global organizations and innovative startups. Apart from this, there is also an increasing demand for mobile app developers that hold expertise in Machine Learning and Artificial Intelligence i.e. AI.

Here is a list of some of the most important technologies that developers should pay special attention in the year 2020:

In the case of UI (User Interface) and UX (User Experience) designing, one of the things that the app designers, as well as developers, need to know is that both UX and UI have slightly different concepts and cannot be considered the same.

Basically, the mobile application designers who work on the interface for websites and apps should focus on enhancing the visual appeal for the users. Along with this, they should design a simple navigation flow while on the other hand, UX professionals should conduct a number of tests and then analyze the different aspects of user interaction and how intuitive the overall user experience actually is.

If you want to progress as a web developer in 2020 then it is crucial for you to have an advanced level of familiarity with Machine Learning and Artificial Intelligence (A.I.). Here, the main idea of the technologies is to manage a variety of day-to-day human tasks that are further evolved in a range of different industrial processes. 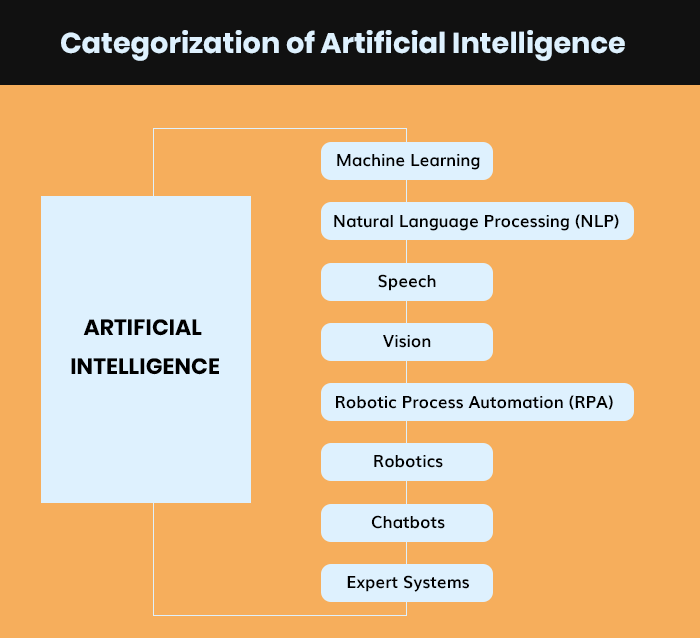 The above image is the basic representation of artificial intelligence (AI) technology categorization which also includes other sub-categories like machine learning, chatbot technology, robotics etc..

If we look at the present day scenario, we can say that there is an indication of very little understanding of the effective implementation of technologies like ML (Machine Learning) and AI. These are those emerging technologies that have a direct impact on business productivity and also on cost-effectiveness.

Augmented Reality also known as AR is one of the many topics that we have previously covered in the section of emerging technologies. AR can also be referred to as a technology that has been considered to be more valuable in educational and training purposes nowadays in comparison to its initial integration in the field of gaming and entertainment. Over the last few years, we have witnessed that a number of SMEs (Small and medium-scale enterprises) have gotten into building hardware as well as software features for integrating augmented reality technology.

Along with this, software and application developers who are competent enough in segments of conceptualizing, designing and developing applications using interactive APIs are now required in quite high demand.

Now that we have stated the importance of technologies like machine learning and UI/UX design, it's time we move on to a more technical aspect such as Cloud Computing and SaaS. In order to achieve success in the upcoming years, as a developer, you should also have excellent command over cloud computing as well as SaaS fundamentals. 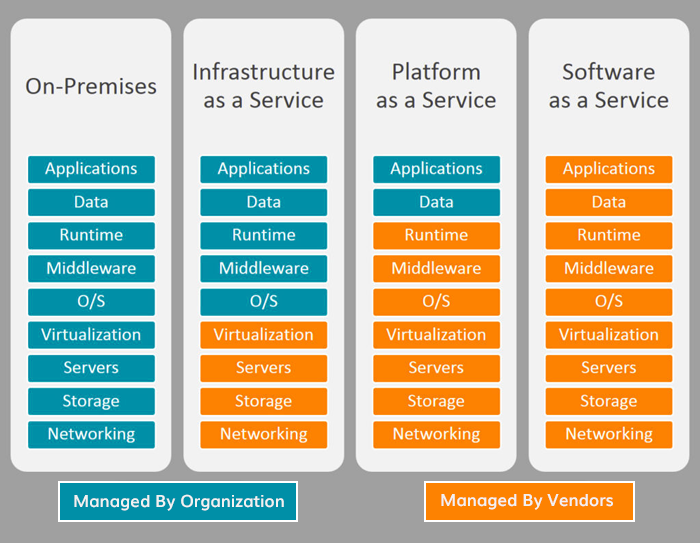 The image above represents the basic differences between PaaS, IaaS and SaaS platforms, when compared on the basis of on-premises factors.

SaaS i.e. Software as a Service is no doubt among the top skills that software developers need to excel at. And if the IT professionals want to stand out they also need to have exceptional talent in cloud computing, this is the main reason why Web developers should think about learning skills over cloud stacks like Amazon AWS, virtualized capabilities, Microsoft Hyper-V, IPv6 etc..

Now that we have discussed the basics of software developers skills, let's move to the technologies and some technologies that will be big in 2020 are machine learning, software engineering methodology skills, IoT etc.. And looking at the salary aspect of developers, the salary of a full-stack developer can basically reflect the level of knowledge and experience.

And in order to stay tuned with more interesting articles from MobileAppDaily, make sure to click on that ‘Subscribe’ button to never miss another update. Also let us know in the ‘Comment’ section down below, which web developer skills do you like most?

NEXT Top Proximity Marketing Apps For 2020

Your retail app may not be able to compete with other more popular apps. However, there are many opportunities to make your retail app profitable. We all aim to create revolutionizing products, but we must always be prepared for the risk. In this post, you will see a list of recommendations on how t

You are done with all the hard work that goes into mobile app development, published your app successfully in the Google Play or App Store, marketed it exceptionally well to attract the clients and now waiting desperately while thinking that you are done with the app marketing job. In case, you are

Around two million mobile apps were available in both Google Play and Apple App stores as of July to September 2018. But in an increasingly saturated app market, you’ll have to stand out from the rest of the competition to make it out alive.If you settle for a ready-made mobile app for you