Carefully scrutinize your app by finding the most common development mistakes! 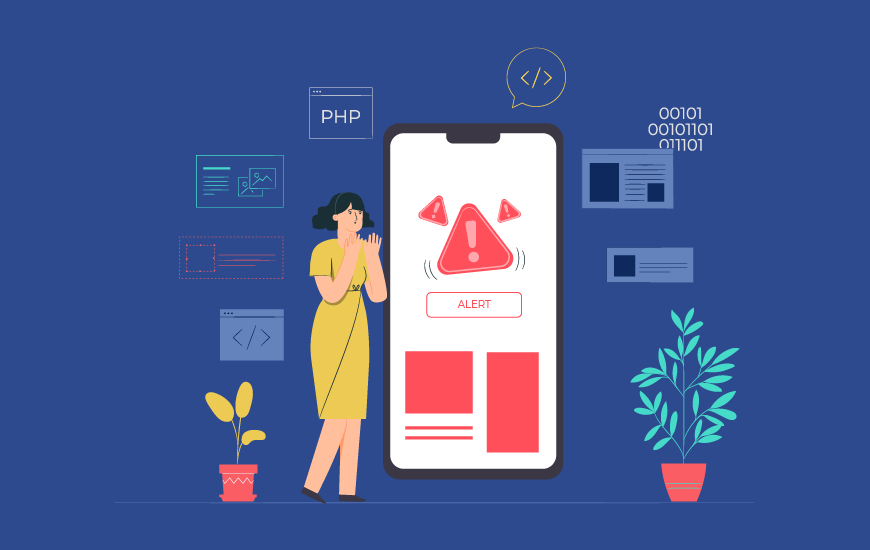 Have you ever thought why your app doesn't get success even when it's designed by keeping all the required app development parameters in mind? It's because you mostly ignore several important factors that might be your target audience, app visibility, and important functions. Ignoring such aspects mostly result in app failure even if you have a dedicated and most promising team.

To make it more clear, we've categorized the list into three sections:

While the former covers mistakes that should be avoided in an overall process, the latter commits its attention to User Interface: primarily design.

1. Too Much of Anything is Dangerous, Especially when it Comes to Fonts

Many developers are misguided by the misconception that fancy fonts improve the UI of an app. In Fact, it has the opposite effect on the design as it makes the design look messy. Keeping the app interface coherent with simple system fonts. For example, you can choose the San Francisco font for iOS and Roboto to create an Android UI interface.

A very important aspect of fonts that developers tend to forget is that a font is a software, that needs licensing.” Using a font without licensing can cost you up to $2,000!

2. Less is More when it's on Display

When smartphones and tablets getting a bigger screen; it’s mandatory for developers to display all their features on the main screen. But instead of informing the user, this gamut of information becomes confusing, making it hard for users to understand and use the app.

These days, users quickly get attracted to visual appearances. So, it's great if you keep the visuals of an app simple and alluring. The visual elements present in the actions of an app should be consistent so that they can make it easier for users to relate the options screens with one another.

3. Android and Apple are not the same

Android and Apple are different platforms that need different designs: The worst mistake developers often make by applying the same app design for both Android and iOS app interfaces. Contrary to what developers think it's fine to keep the interface for both platforms similar.

If you're an app owner, make sure that you don't commit such a mistake while developing an app or your business.

4. Pay Attention to How You draw Attention

Again! Remember that humans mostly get attracted to appealing visuals. How you present your app idea to the market is all up to you. And luckily, you can make it happen by paying close attention to the factors that highlight your app's qualities and clear purpose.

Such highlighting factors can be colors, fonts, size, and navigation that help an app draw the users' attention to the most important information/CTA.

1. Bias to one Platform

iOS may have a monopoly in the U.S., but there’s a whole world out there for your app to conquer. Android with a great global audience serves as a stronger platform if you’re targeting market outside U.S. However, it's important to remember that the two platforms though the parallel is still different, so do pay close attention to the design in terms of its visual style.

2. Being the Beta Tester of Your App

A mistake many developers often commit and eventually regret is by not beta testing their apps before launch. Ignoring this valuable perspective usually doesn't let the developers and app owners know the hidden issues like UI glitches, bugs and even high-level flaws that can ruin your App.

If you put your app on beta testing, you'll get accurate insights into how the beta testers utilize your app and make actions through it. This phase can be executed by using app-analytics tools such as Flurry and Google’s Universal Analytics.

3. Rushing to the Monetization Model of the App

How to make money from an App is undoubtedly one of the most daunting questions faced by developers. The options are many- subscription model, freemium approach or in-app advertising?

Thanks to app analysts giants such as AppAnnie and AppTrace that help you find the best approach to compliment your App. These sites organize top apps by categories and popularity, offering you valuable insights on how to monetize your App.

4. Undermining the Importance of Advertising

Sorry to burst your happy bubble, but regardless of how amazing your App may be, the app won’t sell itself unless people hear about it. Defining your target audience is unarguably one of the foremost steps of an app development process. While this information is a key reference while designing your App, showcasing your App at the right moment and in the right places goes a long way in advertising your App.

For instance, Apple is always bringing new features such as “App of the Day” that offers greater visibility to the featured Apps on the App Store. Mobile App experts such as MobileAppDaily serve as a credible source for such updates and identify the latest mobile app trends.

5. Undermining the Importance of a Co-Founder

While looking back into the history of the most successful apps, we found a few common aspects- all these apps had co-founders. After diving deeper into the matter, it has been realized that these arrangements were not just destined but designed.

While one founder was a hacker, the other a marketer. Such complementary associations helped the founders to brainstorm ideas, utilize connections, making the app wholesome.

Some may call them mobile app development risks, while other crucial considerations. Therefore, elements such as touch feature, speed, agile development, connectivity issues, and platform choices must be viewed carefully during the app development process.

No single approach determines the success of an App, there are, however, commonalities that can be found in all successful Apps.

Before you start with the basics of an App, ask yourself these questions: What problem you want to solve with your app? What solution does it provide to the problem that users are willing to pay for it and not the rival Apps. Is it just like an alternative to the rival services or integrated with something unique? How useful is it for targeted customers?

These questions help you validate the idea and purpose you want to solve by developing your app. Remember people are lazy, if you want them to switch from X to Y, one or two updated features won’t make the cut. To stand out from the crowd, the app needs to be developed with a completely new identity.

Give your users fresh and interesting content that compels them to explore the app further. This content can include contests, quizzes, downloadable offers, polls, social integration and more. Speaking of integration, make sure that the third-party advertisements that serve as a revenue source for you are relevant to the content of your App.

3. Branch out to Social Media and the Web

Reading my previous point, you must be wondering how often should you post new content? While, it is great if you can update your content daily, hourly and even by-the-minute, its difficult to adopt a rhythm. A great solution to this can be tying the app to a traditional vehicle like radio or television.

4. Some Advice From the Wise Ones

Kim Heldman, senior IT director for the state of Colorado, provides a structured methodology for the app development processes, the most popular of which includes a waterfall, agile and scrum. 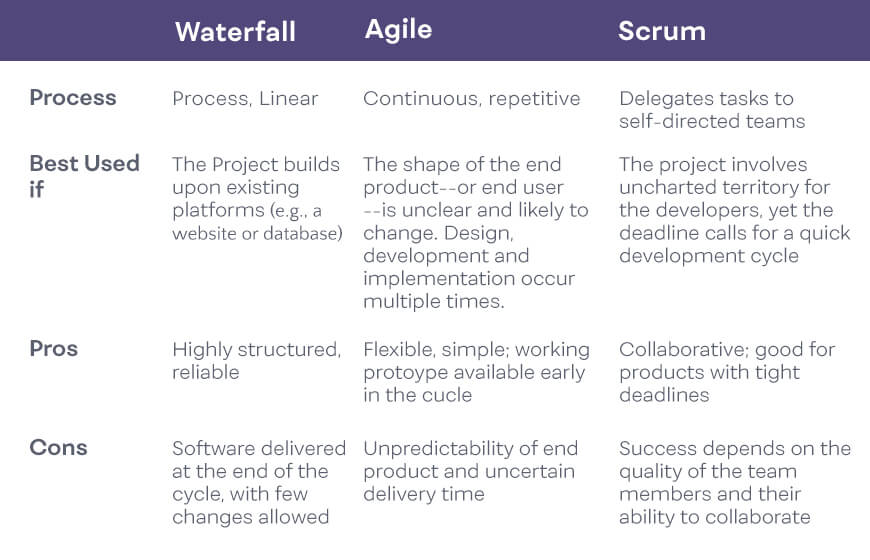 5. Every App is different and so is its strategy

While different mobile Apps have a different purpose, their services can be loosely categorized into need-based apps, efficiency-based- tasks management apps and entertainment-based apps. Each category needs a different strategy, so as to make sure that your idea is well validated.

The UI design has more than one wireframe, the app is well tested “by the experts other than you,” and that includes a well- prepared pitch when the app is submitted to the Google App Store or Apple App Store.

Every app has room for improvement which is digestible. But developing an app with mistakes can't be tolerated as it directly leads to its failure. Overcoming these mistakes is great idea that you can do by finding the common mistakes of an app. It would be better if you make sure that you will not commit the same mistakes in upcoming apps. This ultimately improves the quality and usability of your app.

PREVIOUS Best 20 Productivity Apps For iOS And Android In 2020

NEXT Stop Google Apps Tracking On Android Follow The Tricks

Top Common Mistakes To Avoid Before And After App Launch

App development can be a lucrative business for developers around the world, and Dubai, UAE is no different. In fact, in the wake of World Expo 2020, there is a huge potential for any company to make it big.So, whether you are a startup looking to make a mark here or a big company, you can have

Common Mobile App Budgeting Mistakes That You Can Avoid

With the number of smartphone users worldwide almost touching 2.5 billion, there is an unprecedented jump in the mobile apps also. After realizing the true potential of mobile apps in branding and reaching out to customers, many of the business houses have extended their investment in mobile app dev

Back when Apple launched its first ever wallet app in 2014, few thought that the technology would be as successful as it is today. Now, most consumers prefer wallet apps that render the need to carry cash unnecessary.In fact, the masses carry smartphones that are compatible with wallet apps. Thi

What Are The Challenges Faced By The Android Developers

There are numerous things to consider when it comes to Android. From its global users to its free availability and to its extensive use in all devices - from phones to tablets to smartwatches is indicative of its popularity. The latest version of Google’s mobile operating system is An