A perfect app design can propel your app downloads and take it to the top of the charts. 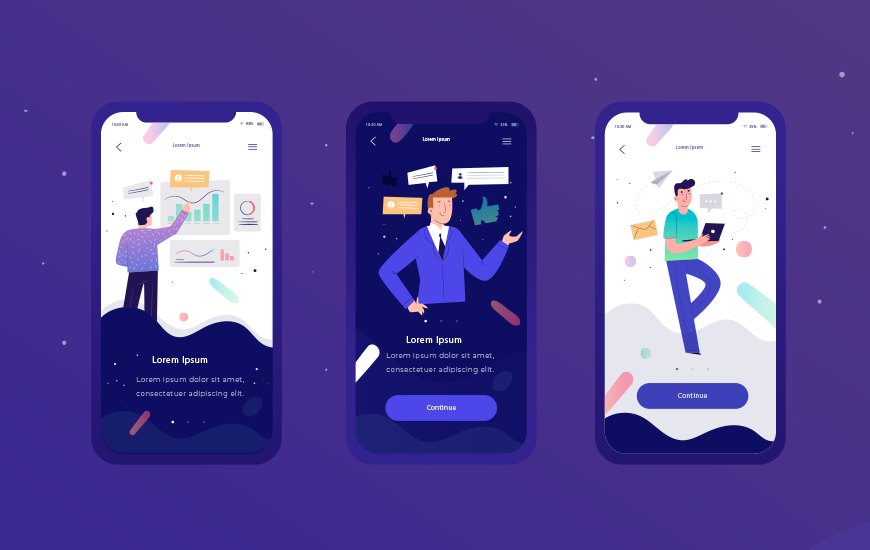 Mobile app designing can be described as a combination of technology and art that needs to leave an impact on the user. The first impression is indeed the last impression in this case, especially at a time when there is no dearth of mobile app design companies in the market.

A typical user today has a lot of expectations from their mobile applications, such as the ease of use, faster load time, creative interface, etc. These expectations are increasing with each passing day.

One of the key differences between an ideal mobile application and an inept one is the UX, i.e., User Experience, as it tends to separate the application from the other apps based on their mobile app design.

Below are some of the mobile app design guidelines that can make your app look and feel like a piece of cake in the user's eyes. You can also check the complete guide on UX designing here.

1. Cut Down on Unwanted Tasks

For offloading the tasks, you need to go through the app's design and look for the things that require effort from the user's side like making a specific decision or to enter any data in the app, etc. Now, you need to find alternatives to the tasks that you have shortlisted.

When inputting the data in the fields, you can create an option to save details like a 'Smart Default' setting, so that the user does not have to fill in his/her details again and again.

Decluttering is a highly recommended option to include while simplifying the process of designing your application. A cluttered interface can end up being a huge obstacle for good app design. By overloading the mobile app interface, you overload the users with a ton of information that may be unnecessary to them and not required at all.

For both mobile and desktop apps, clutter is a complication that needs to be eliminated as soon as possible. So, decluttering is the method that can save your app design because every image, button, icon, and feature that the designer adds makes the app more complex than before.

Make sure that you improve the app's comprehension by decluttering the things that are not necessary for your app's design.

Cognitive load refers to the amount of brainpower required to use the app. The human brain has a limited amount of processing power, and when an app provides too much information at once, it might overwhelm the user and make them abandon the task.

If you are someone who is not entirely familiar with the term cognitive load, it can be defined as the total amount of the user's brainpower that is required for using an application. As compared to the app’s processing, the human brain is a bit slow and if too much information is bombarded at once, it will confuse the user and ultimately, the user might uninstall the app.

So, it's the app designer’s responsibility to minimize the cognitive load of the user by the functional minimalism technique.

It’s always wise to break down a task into multiple layers, as it won’t burden the user at once and will give ample time to process the task. A task in an app can be divided into a number of subtasks.

The best example of a task breakdown is e-commerce apps. While checking out, the app process only one function at a screen like first comes the order review, then there is address input screen, and the payment screen is the last, after which the user can take an overview of the order.

This way, the user fill up all the fields, without feeling the brunt.

5. Don’t Experiment With the Standard Screens

Familiar screens are always preferred over new screens because it gives the user a sense of corresponding. Also, after seeing the same screen design over multiple apps, it builds trust among the users. 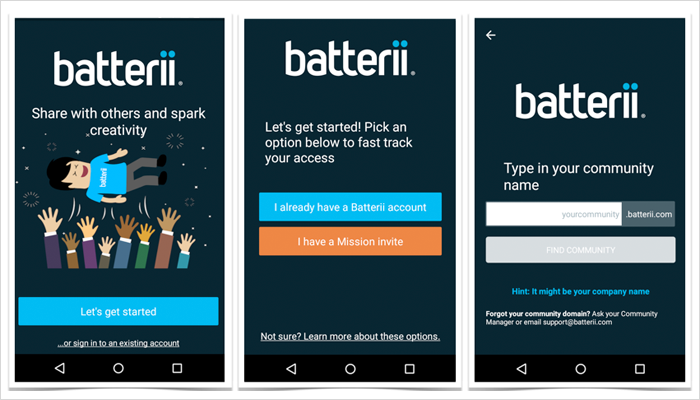 Lately, the screens like ‘What’s new,’ ‘Search results,’ and ‘Gettings started’ have become standard. Whenever a user downloads a new app and is introduced to the familiar screens, it brings up the prior experience to interact with the app.

There is no need to use special characters or jargon in your app, as it may irk the user. Communicating clearly is always a priority and should be followed in the mobile app design guidelines as well.

If an app is targeted at the global audience, then it becomes vital to take care of people from different walks of life, as there can be language barriers.

Here are the types of consistency that the app designer needs to follow:

App crashes are common, as it may be due to the wrong command input of some internal error that may crash the app. But how an app handles that error matters a lot. A plain text of ‘An Error Occurred’ won’t impress the user. 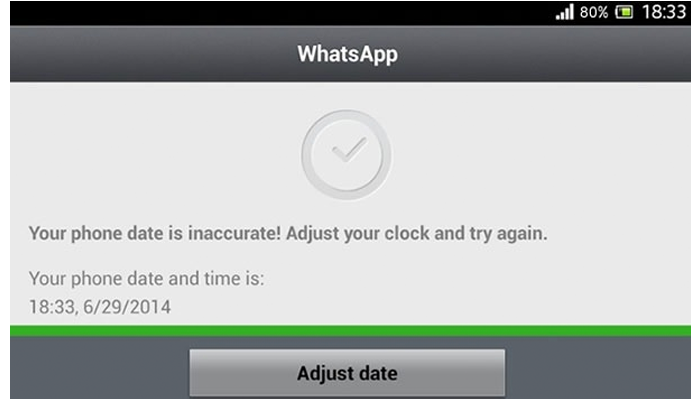 If the user is not pacified right after anything goes wrong, there will be no reason why the user should stick to the app for long. It would be great if the screen pops up with alternatives that can be deployed at the time of the crash or a relatable explanation of the crash is displayed.

Cost to Design a Mobile App

Now, here comes the part regarding the app development cost and the cost of app design. A wide range of tasks is required for designing an app, which includes app icon & logo design, end-user research, UX/UI design, graphic design and much more.

Here we will be focusing on the cost related to the app designing.

The app design cost is mainly calculated on the basis of two things, which are:

The app designing cost varies from one geographic location to another location and this change in pricing is very much evident in the hourly rates of the Western Countries. For example, a majority of clients prefer a country like India for its app designing projects because of the lower pricing.

Countries like the United Kingdom and the United States are known to have a price rate of $50 to $150 per hour, so the client will be spending quite a few thousands of dollars for getting a base level mobile app of good functioning. 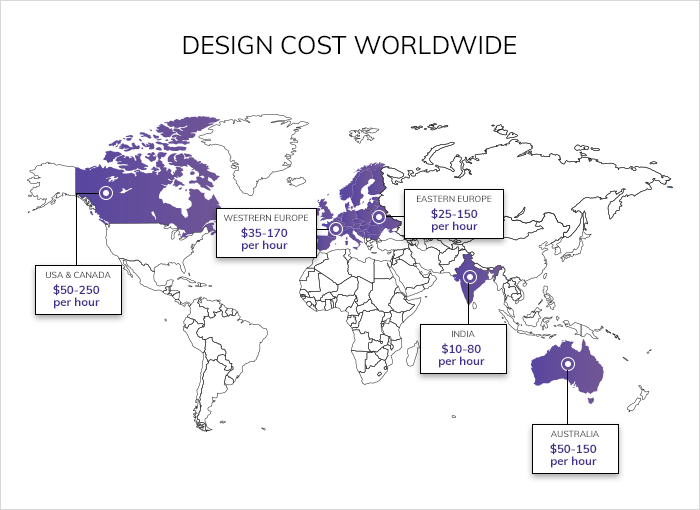 The other thing that matters is the complexity of the project. The cost of designing an application highly depends on your project's complexity.

For instance, if your Android/iOS mobile app requires a lot of animations and functionalities, then it will be an arduous task for the designer to come out clean on all the app screens. Also, the app costing will be lesser than the app which features animations.  Therefore, it makes more sense for the developers to learn to include animations in the app.

Following are the levels of complexity in an app:

An app of simple complexity may take up to 100 hours and start with a budget of $4k or $5k. An on-demand app can easily fall into this category as initially it will be launched for any one platform to test the waters. The app with simple complexity will only consist of the features that are necessary for the app to fulfill the user's requirements.

For example, a messenger app like WhatsApp could take over 200 hours for designing purpose that includes features like additional screens, newly updated version and much more.

It may require more than 350 hours and can cost the client a whopping sum of $18,000 or more. However, there are not many complex apps out there in the market. 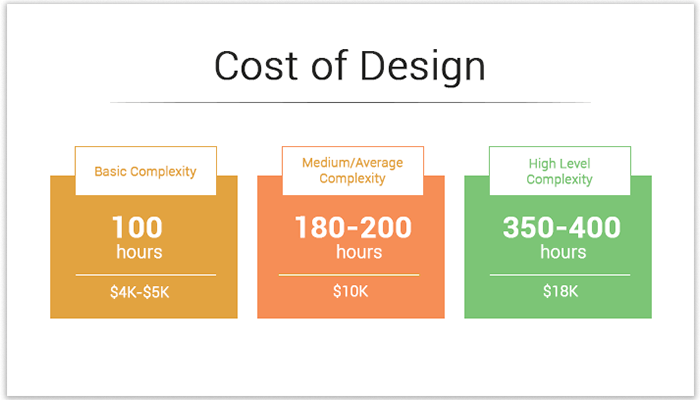 In the industry of mobile and web applications, the Return on Investment or ROI plays one of the most crucial roles.

Many of the applications end up failing because there was no investment done in the app designing part. With ROI in the app designing, these issues can be solved by creating design prototypes for the app which will even cost less comparatively. And hence, it’s wise to resolve the issues in the early stages rather than going after them later.

After the completion of the development, if the app is ready for submission in the app store, but the designing segment is not that impressive, you should consider investing more time and money in the designing part. It may sound like a tough decision at first, but it will be worth the wait.

For instance, a research was conducted on an e-commerce site, which popped up registration form every time a user filled his shopping cart. It forced many users to leave the website even before making the purchase. To set it right, the registration form was removed and there was an increase of 45% in the number of purchases.

This example clearly shows the impact of design on ROI. So, it’s better to invest in the early stages itself. 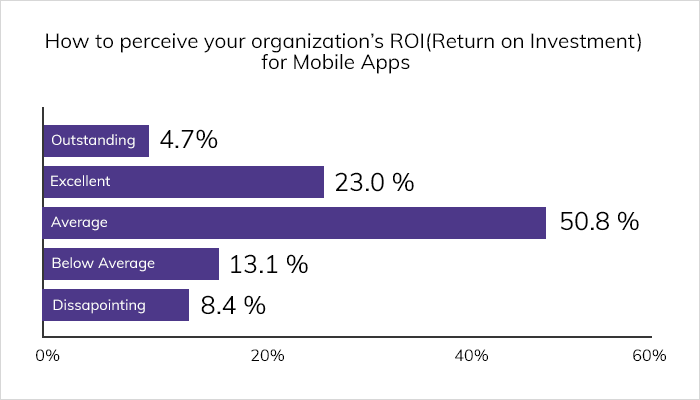 It is critical because the users can only see the true capability of your mobile application once they can interact with the app smoothly; otherwise, they will lose interest in the app and will probably uninstall it without going further.

Also, if you want your already existing app to perform well in the market, you need to redesign the application as per the latest trend, taste, and requirements of your targeted audience. This strategy will surely provide your app with a much-needed boost to re-enter in the respective app category.

We hope that this information has cleared some of your questions regarding the mobile app UI design trends, guidelines and the cost to design a mobile app. Before we conclude, take a look at the significant factors that influences the total costing of an app:

Do let us know if you think we missed anything in the mobile app design guidelines that you might want us to mention. Just leave us a comment in the section below.

NEXT How To Use Push Notifications In Driving Retention Effectively?

How Much Does it Cost to Make an App: A Complete Guide On Pricing

The mobile app development industry is growing like never before. There are around 2.2 million apps on the App Store and a massive 2.8 million count on Google Play. this alone is enough to justify how mobile apps are practically transforming the world, like Nikola Tesla once predicted, almost a cent

How Much Does It Cost To Develop An App Like Netflix In 2020?

Bugs and the Bottom Line: A Rare Look at the Cost of App Instability