The adoption rate of Kotlin is much higher than any other programming language. 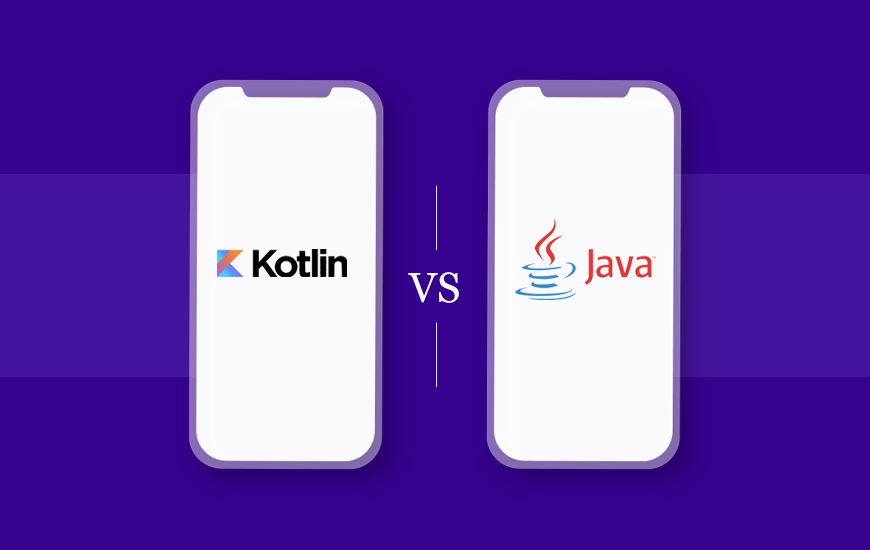 If you are a mobile app developer, Java must have been your favoured language. Ever since Android apps made an appearance into the Play Store, Java programming language has been at the heart of Android app development.

However, over the last decade, several other programming languages have challenged Java with Kotlin being the chief flag bearer. To add the much needed punch to it, Google acknowledged Kotlin as the second official language of Android app development.

Although fairly nascent, Kotlin with an array of programming features and efficient coding has grabbed plausible attention in the mobile app development framework and now Kotlin threatens to replace Java from the app development ecosystem itself.

The jump to cross-platform Kotlin development is witnessed at a time when more and more apps are pouring in. This year, enterprises like Netflix, Uber, Trello, and Airbnb have already embraced Kotlin to build their app.

But why exactly is Kotlin getting more popular as against Java and which is the best app development language? Let’s find out “is kotlin better than java?”

Java is an object-oriented programming language that was released by Sun Microsystems. Java came into existence 23 years ago and with other notable languages like Scala and Groovy, it has remained in the primary languages in Android app development.

Since its launch, Java android app development is extensively employed in the designing of server apps, Android apps, web apps, embedded systems, and websites. Most of the Java elements are accessible as open-source, and for the rest, there are mostly replacements for them. Java popularity is most in financial software development. 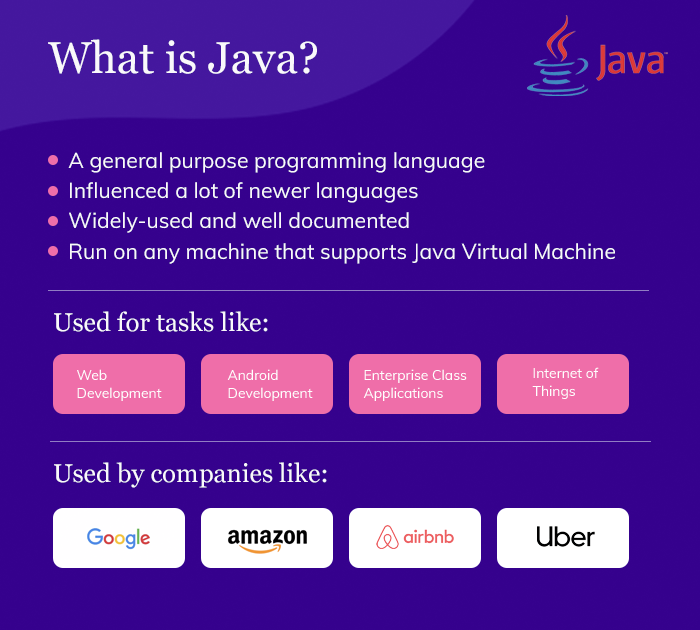 Kotlin is a general-purpose programming language that incorporates with JVM, Android, JavaScript, and Native. It’s developed by JetBrains as an open-source platform under the Apache 2.0 license.

If you are wondering ‘why use Kotlin’ for the Android studio programming language; it’s because the developer can deploy Kotlin in the form of object-oriented programming and functional programming. Kotlin employs LLMV compiler technology to compile Kotlin codes into binaries for CPU architectures and operating systems like iOS, Windows, Linux, and Mac.

One of the best things about this language is that it combines both object-oriented and functional programming features.

The following are the major Java IDEs support that comes packed with Kotlin for Android developers:

Google's programming language Kotlin can be used for the development of most kind of apps, then it can be from server-side, client-side web or Android. 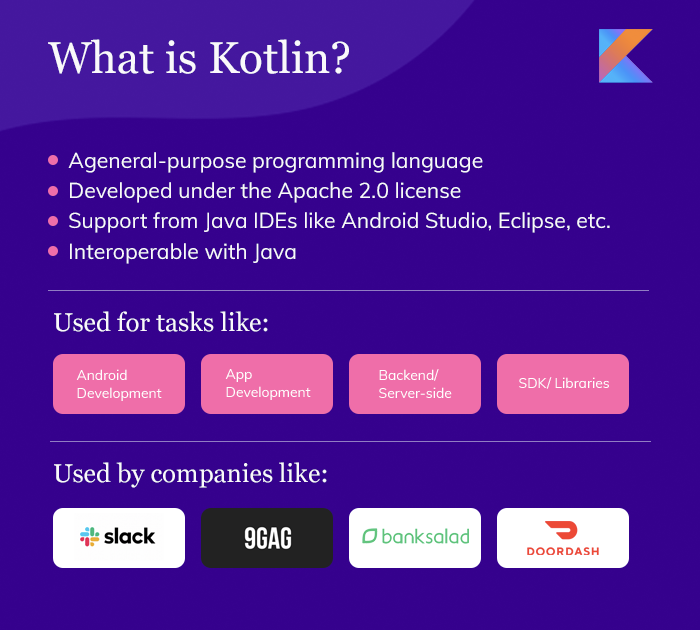 Kotlin or Java for Android: Reasons to Choose One

If we go by the TIOBE Programming Community Index, Java hugely influences the app development process and sits comfortably at the top with a rating of 15.058%, whereas, Kotlin is nowhere to be seen in the top 20 programming languages. Last year also, Kotlin was able to break into top 50 of the rankings and as of July 2019, it has jumped two positions to 47.

However, Kotlin is steadily making its way to the market and companies like Basecamp, Netflix, Amazon, and Square has already adopted Kotlin. But till date, Java is more popular, as compared to Kotlin.

At first hand, Kotlin was designed in such a manner that it could easily interoperable with Java. Consequently, the developers can translate java codes into Kotlin and vice versa, that too without the need to change the operability.

Kotlin being the new language offers some additional features that make Kotlin a preferred pick over Java. As user can’t differentiate between the two because codes of both the programming languages are compiled to JVM bytecode.

As compared to Kotlin, the amount of coding required in Java is quite a lot, whereas Kotlin is designed in such a way that the number of boilerplate code is required the least. According to JetBrains, Kotlin helps in cutting down the code by almost 40%.

As per a test conducted after converting “App Lock” app from Java into Kotlin, there was a reduction of 30% in the code lines.

A developer from Keepsafe Engineering says,

“The method count decrease is a result of both Kotlin being a more concise language, as well as the fact that many of the quality of life libraries that were previously used in Java are no longer necessary.”

As we know, a safer code can be written in lesser code lines and hence, Kotlin prevails over Java concerning coding.

Due to a similar bytecode structure, Kotlin performance is as fast as Java codes. But for code using lambdas, Kotlin runs faster than the Java; thanks to Kotlin's support for inline functions. 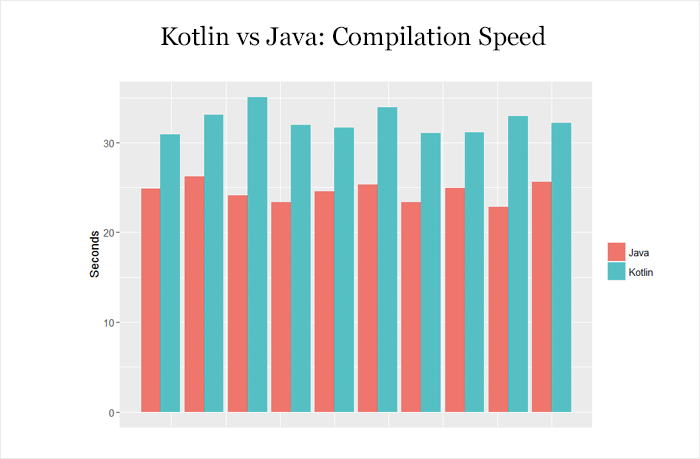 “A Kotlin application runs as fast as an equivalent Java one, thanks to very similar bytecode structure. With Kotlin's support for inline functions, code using lambdas often runs even faster than the same code written in Java.”

Java relevance in the Android ecosystem is not that impressive. Android Studio 3.0 actively supports Java 7 and some of the Java 8 features, but the latest version of Java is SE 10, which has no support from Android Studio.

Due to this, app developers are more inclined towards Kotlin because Kotlin fully embraces the potential of the latest versions. Again, Android Studio is based on the JetBrains’ IntelliJ IDEA, which is excellent for Kotlin.

Kotlin is free to use and if someone is using Java then there are Java-to-Kotlin converters that can do it for free. Kotlin Plugin is one thing that needs to be installed. Moreover, Kotlin can freely work with all the libraries and frameworks of Java.

Though there may be a cost involved for the learning Kotlin for Android developers.

Java is two decades old and in the meanwhile, it has been able to build a robust and impressive community of developers across the globe. Then we can always lay our hands on the inscrutable of implemented Java projects.

As of date, Java has 82,713 repository results in Github. Thus the chances remain high for the queries that a developer may be searching for, which ultimately makes the development process a breeze.

If we look at the Kotlin repositories, it’s way less than Java and is still currently in the mid-phase. Therefore, there are not many Kotlin experts that one can find for the development process.

Are You Switching From Java to Kotlin?

Kotlin does have a wide array of features that come in handy for any app developer, but there are a few things that need to be kept in mind before switching from Java to Kotlin.

The first thing is to make sure if the project team is comfortable switching to Kotlin and has a basic understanding of the subject. Also, it will bring in the concept of rewriting and optimizing the project, and thus, elevating the learning curve.

The decision of moving to Kotlin can be derived from its growth, which is clearly high in the below image.

If the switch is from Java, then it may be uncomplicated for the developing team, but in case of any other architecture, the complexities may increase. Therefore, the team should be ready to adopt the new language, as it can cause the creation, deletion, and merging of some artifacts and classes.

Again the mobile architecture should be expandable enough to adjust any new changes that may come along with the new language. During the transition process, the chances of damage to the product’s architecture remain high.

Where Do We See Kotlin in Next Five Years?

There is no doubt in the ever-increasing use of Kotling for developing codes and it can be well verified by the fact that since 2018 till now, about 1.5 million developers wrote in Kotlin code. Kotlin has the backing of JetBrains and Google, coupled with the trust of some top brands in developing their app gives it global recognition.

According to a report by Realm, Kotlin has overtaken Java in the last quarter of 2018 itself.

Hence, we can expect Kotlin to stay in the mobile app development industry for at least the next three-four years and beyond that, if the developing team keeps it updated with the new technology advancements, the open-source programming language can stay for even longer.

Is Kotlin the “write once and run everywhere” language?

Kotlin has already proved its point of being a prevailing programming language among the developers’ community and the liberty it brings of experimenting with modern programming is simply remarkable.

The need to write codes is also way less than many other languages that are available in the market right now. Altogether, Kotlin has set very high standards in the app development field and has come out as an ideal programming language.

NEXT Know About React Native 0.60 Update With its Compelling Features

Why is JavaScript Mobile App Development Framework the Best Pick in 2022?

JavaScript is a universal programming language for web development. Developers can create an engaging front-end experience and charm users with fantastic UIs. The language is also highly popular and used by more than 64% of software engineers.If you are wondering, can we use JavaScript for