Apps migrated from Java to Kotlin can effectively work on mixed-language projects. 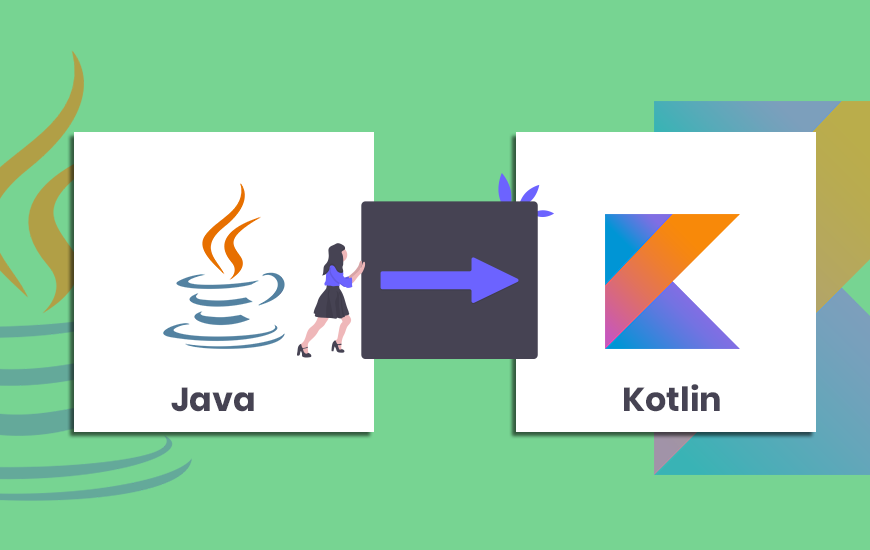 We are currently witnessing the rise of the Kotlin programming language in the sector of mobile application development.

It's been almost two years since Google announced Kotlin' as an official programming language for Androids apps and Android app development at it’s 2017 I/O Conference.

And since then, a number of web, as well as mobile app developers, have made the decision to migrate their apps from Java to Kotlin. This is because the Android app developers no longer have to be solely dependent on the Java programming language as Kotlin is to enable to work easily on projects that are based on mixed languages.

This further makes Kotlin highly compatible to be used with Java and Objective C. So, one can say that the learning curve of this new stellar language is much broader. Now let’s find the answers behind this need for Java to Kotlin migration.

Why is Kotlin Better?

Although, we have previously written an entire detailed article on ‘Why Kotlin Is Preferred Language For Android Development’ that showcases the need behind this migration of java to Kotlin apps. It’s time to refresh our memory with the benefits that Kotlin offers to Android app mobile app development.

Things You Need to Know About Kotlin

Now that we have gone through the main reasons why you need to consider to convert your Java app to a Kotlin app. But with the pros comes cons as well, that means there are some shortcomings related to Kotlin. Here are some of the other facts about the Kotlin programming language that you need to be aware of.

These are some of the Kotlin facts that might generate some concern for the Android developers while the process of Java to Kotlin migration. Now, it's time to go straight to the list of the top applications that have made the decision of migration from Java to Kotlin.

The Kotlin language was developed by JetBrains as a static general-purpose programming language that was particularly designed for the JVM (Java Virtual Machine) and JavaScript. 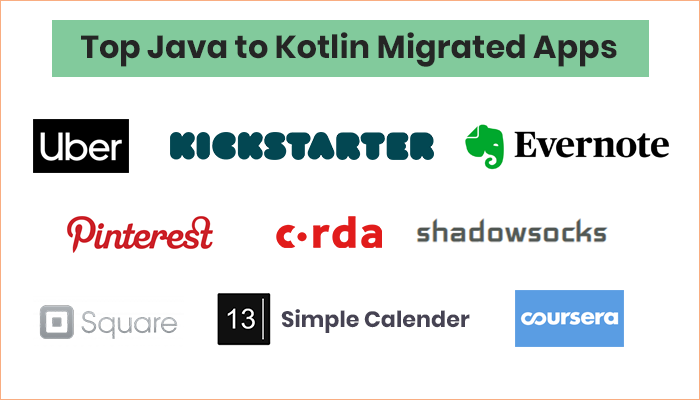 Here are the apps that took advantage of this opportunity and developed their android famous apps using Kotlin:

Uber is one of the most successful on-demand ride-sharing mobile applications on both Android as well as iOS app development platforms. This online taxi-booking app uses the Kotlin language to conduct its Internal Tolling processes. Some of these processes include Gradle Plugins, Annotation Processors etc.

Kickstarter has made a name for itself as the world's largest funding platform that helps in providing funds to creative projects, for example, a film project based on small-scale level or other projects related to different categories like music, art & theater, comics, designing, photography etc. The Kickstarter app is powered by Kotlin itself.

Evernote is a cross-platform mobile and web app that is supported by various platforms like Microsoft Windows, iOS, and Android. This task management and note-taking application have listed Kotlin in their list of Android clients. With this app, the user can perform operations such as listing tasks, organizing notes and archiving.

Pinterest is your go-to place if you are looking for some inspiration or are in search of creative ideas. This well-known photo sharing application is also one of the huge companies that are using Kotlin Android app development. The Pinterest mobile app has officially migrated their Java-based app to Kotlin programming language.

Corda can be referred to as an open source blockchain project that basically helps Blockchain app developers in creating interoperable blockchain networks with strict privacy regulations that are completely based on Kotlin. Other than that, Corda also offers smart contract technology to businesses.

The Android app of Shadowsocks is entirely built on the Kotlin programming language and has more than 1,000,000 app downloads in the Google Play Store alone. As a highly secure cross-platform app development project it helps the app users in using the Internet in a much more private and secure way.

Square a.k.a. Square Point of Sale was formerly known as Register, is a free android app that provides a great payment platform to its Android users. Square approved Kotlin for Android back almost a year ago in 2017 and since then it has supported its point-of-sale mobile application with Kotlin.

The Simple Calendar mobile app for Android is another great example of the java-based apps that are now completely based on the programming language of Kotlin. This is an open source ad-free application with the option of CalDAV synchronization, where users can set up their reminders and even generate recurring events.

Coursera can be your one-place destination where users have the opportunity to access hundreds of online courses via educational apps. This Kotlin based application allows its app users to learn online while earning credentials from some of the most renowned institutions like Stanford and Yale.

The  Android application developers of Basecamp have stated that the speed, as well as the code quality of their app, has improved a lot since its migration from Java to Kotlin. As it is a project management application, project managers can use this ass to increase their work efficiency and productivity.

Today, Kotlin is making its spot among some of the most prominent programming languages that run on the JVM i.e. Java virtual machine. To share a few updates and insights regarding what's coming next for Kotlin, JetBrains organized the KotlinConf 2018 which can be referred to as the largest in-person gathering of the Kotlin community held annually.

At the conference, it was also stated that Kotlin is quickly becoming a significant mobile app development language for Android as almost 27 percent of the best thousand Android apps on the Google Play Store that are already using Kotlin.

This fact is also encouraging the Android mobile app developers from all across the world to switch from Java to Kotlin for Android and build their mobile apps on it. So in case you are interested in reading more informative articles on Kotlin Android apps, make sure to click on that ‘Subscribe’ button.

Two of the popular cross-platform frameworks includes React Native and Xamarin. The year 2018 was stellar concerning apps that were produced in any defined year and most of these applications were developed using these two influential cross-platform mobile app development frameworks.iOS applicat

What is the Cost of Custom App Development for SaaS-based Business?

It's no secret that cloud computing has revolutionized how businesses operate these days. Any company today can basically rent out computing power alongside software and platform solutions. Anything you need can be provided via the cloud (the Internet).The most popular example is SaaS (Softw

Tracking employees’ time accurately is one of the most challenging tasks for businesses today. Many organizations have lost (and are still losing) thousands of dollars for not monitoring the exact time their employees show up and leave their premises.A study conducted by the American Payro