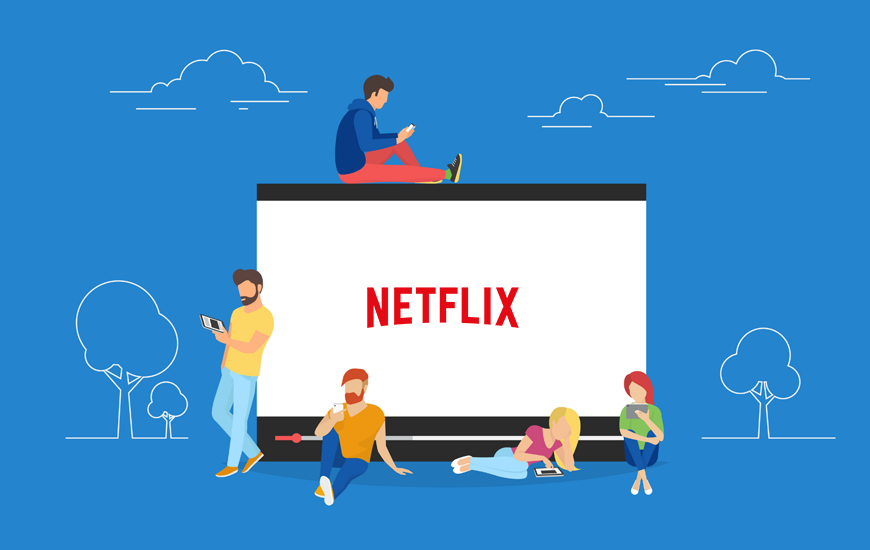 As the popularity of apps like Netflix and Hulu is rising, more and more people are becoming aware of the role of such video streaming applications. And the interesting part about this is that the growth of digital media consumption is growing exponentially over the past few years.

It was even reported by App Annie in the year 2017, that the population of TV viewers spent more than 10 billion hours streaming the top ten video/movie streaming apps in just a span of 12 months. This huge number speaks for itself and acts as a major reason behind the fact that many businesses are now looking forward to creating their own movie streaming app like Netflix.

The reason we are going forward with the example of Netflix and not Amazon Prime or Hulu is that this has become one of the most prominent web as well as mobile apps with a simple yet innovative marketing strategy. Netflix can also be named as the OG who bought the whole idea of live movie streaming into the business. 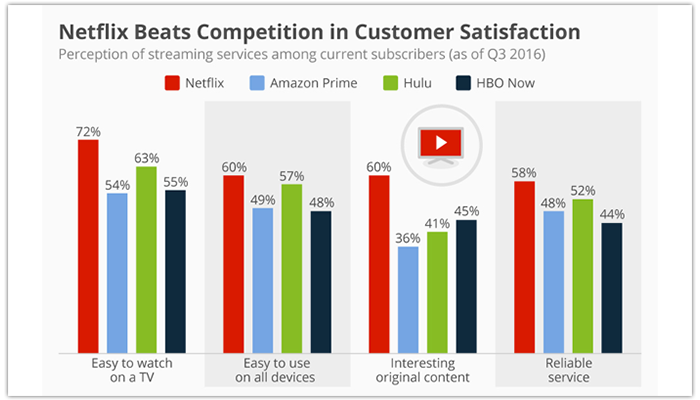 The above image is an analytics report that was released by Statista on video streaming services, which show statistics for streaming apps like HBO Now, Netflix, Amazon Prime, and Hulu. As you can see, the Netflix app for PC is a video streaming service application that is leading all four different segments, making itself a user favorite.

Why Movie Streaming Apps Are Needed?

If we look at present-day scenarios, a majority of people like to spend their free time doing nothing but binge-watching their favorite shows. And one of the phrases that became highly popular in the year 2018 was 'Netflix and Chill' because people consider it as their favorite time to do a movie marathon with their friends and family.

Think of it like this, 'What would you do if you had an exhausting day at the office'? You would want to relax and spend some quality time with your close ones while watching the series that you like. And now with all the latest technologies that are available for gadgets like Smartphones, as well as Smart TVs, is an excellent mode of entertainment. 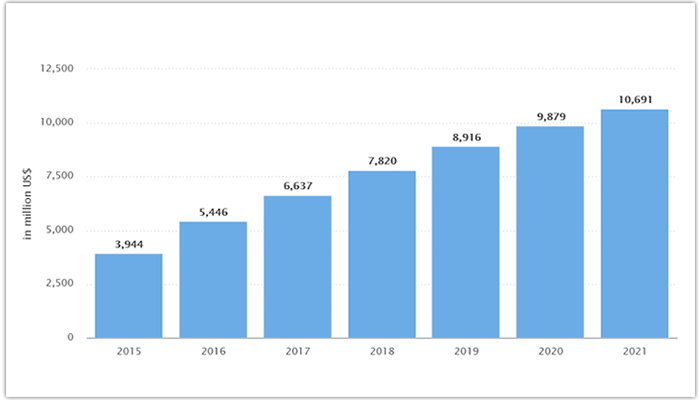 Working of a Video Streaming App

Basically, the Netflix app offers a subscription service that allows users to watch movies and TV show series on many different platforms. Today, it is also the biggest on-demand video service with a gigantic database filled with hundreds and thousands of movies of all genres.

By paying a monthly fee, users can enjoy an unlimited supply of their favorite shows and films, this is the main part that keeps the users highly engaged in the content that is provided by Netflix. The video streaming apps like Netflix are compatible with a wide range of devices on various OS (Operating System) which also includes Smart TV, Windows Phone, iOS, Android, PC, and Mac OS.

The Netflix app for PC can be easily downloaded from app stores, the first of this mobile live-streaming app can be availed for free, but after the trial period is over a fixed fee is required per month. Once the monthly subscription is automated, the purchases are then integrated into the app itself. 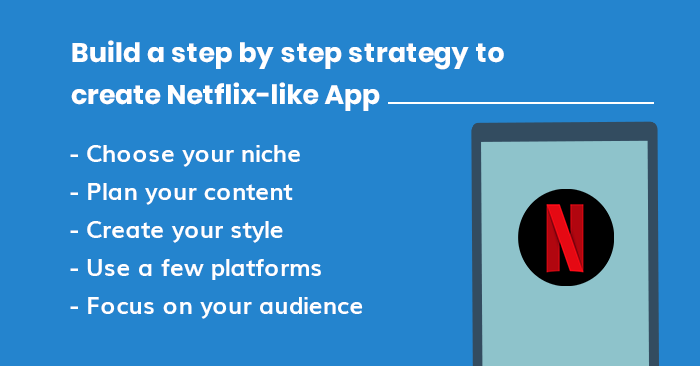 The above image throws light on a step-by-step building strategy to build an app that is similar to a movie streaming app like Netflix. From choosing the niche to shortlisting a suitable platform, there are many steps that need to be considered in the app development process of this mobile application.

Although Netflix is constantly adding new content to their active end-users, the features of the Netflix movie streaming app cover a broader perspective such as:

This feature of adding various profiles in a single account can come in handy in providing access to your family and friends so that they can access a personalized experience with Netflix, which is further built on the basis of their own preferences. With this, you also have the option to add your own search categories to mobile video streaming apps.

Here, the user is free to rate the movies or TV shows that they have watched, this will also act as a filter for the Netflix app to be more precise with the content that is being recommended to the users.

How to Build a Netflix App

The entire process of creating a video streaming app like Netflix can be divided into a few steps, which are:

When it comes to strategizing the process, the right way to do so is by following a step-by-step approach like:

The decision to finalize a business model can be a tricky situation for some entrepreneurs and companies to deal with. One thing that needs to be said before we can move ahead is that following the same business model as the Netflix app does not give you a guarantee of success. 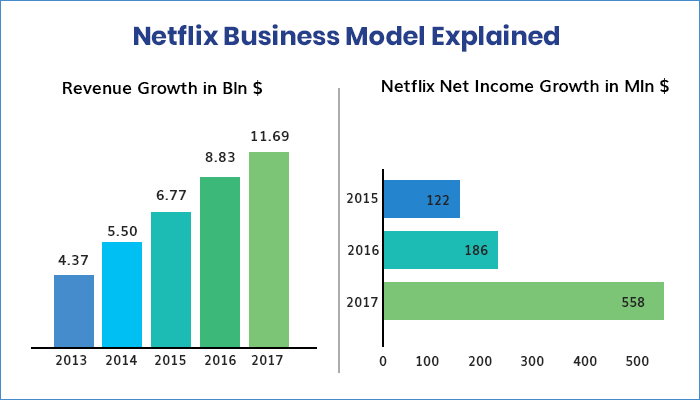 But if your main objective is to become a direct competitor to the Netflix service then create a website similar to it, then you must prepare yourself to spend a couple of few years on making your business profitable first before thinking of exceeding Netflix. 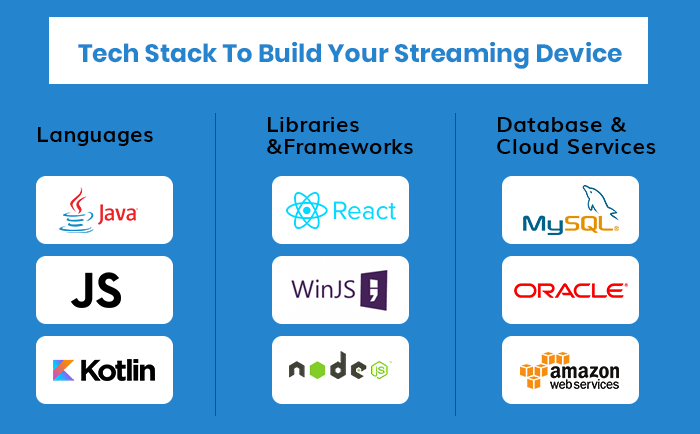 In short, it can be said that the development process of cloning a Netflix app or building one on a similar concept is expensive and requires a great amount of precision, especially when finalizing the marketing strategy as the competition is rising rapidly.

Just recently, we have posted an article on 'How Much Does It Cost To Develop An App Like Netflix?' which features detailed information on what goes behind the mobile app development process. Here, you will get to know about the different factors on which the cost of developing a Netflix app depends.

In addition to this, there are also many variables that fluctuate the expense of the live streaming app development project. Some of them are project plans, the area of application developers, etc..

So, this was our take on the well-requested topic of the movie streaming service provided by the Netflix app. From the development process to the cost of creating a Netflix like the application we have covered it all in this article. So if you are interested in reading more such informative articles on the trending apps in the mobile industry, all you need to do is ‘Subscribe’ to MobileAppDaily.

To develop a great video streaming application, you also require a talented team of mobile app developers, testers and designers. So ensure that you perform proper R&D before hiring an app development company for your project.

Also, we would like to know if you are someone who is subscribed to Netflix or not, let us know in the ‘Comment’ section down below.

Top 9 Answers to Question: How to Make Apps Load Faster?

App loading time is one of the crucial factors affecting the popularity of any app. Users do not like apps with longer loading times at all. The mobile app loading time can affect users psychologically. It can lead them to frustration, and hatred for your app. To prove that statement, let&r

How To Build Apps For Foldable Smartphones?

From the very initial days of the newly evolving smartphone industry back in 2008, there has always been a strive among the blue-chip smartphone manufacturing companies to increase the size of the display panels; they can fit onto a particular smartphone form factor to increase their customer base.