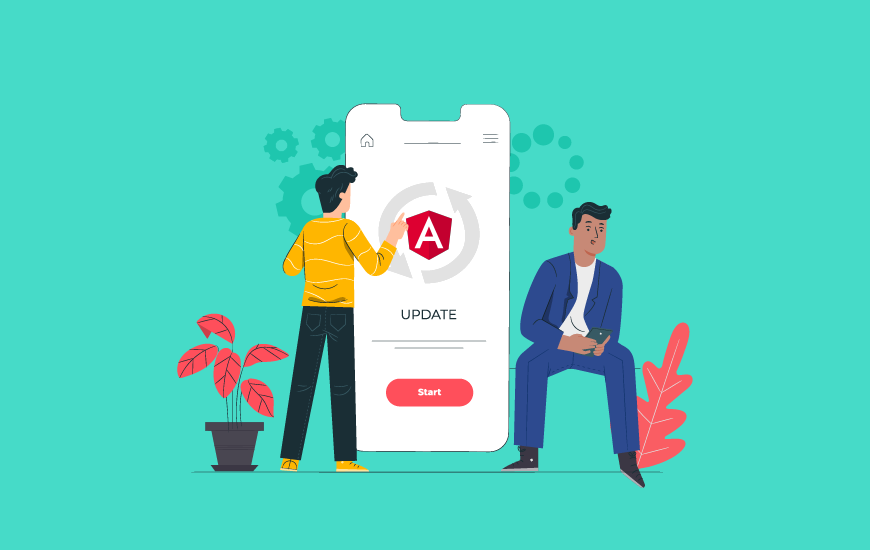 Angular 6 is finally here, and it is dang exciting. Why? Because it has brought along some juicy details that I will be pouring out for you one by one in this write-up. MobileAppDaily enjoys getting hands on such updates because you know we are tech geeks here aiming to flirt with the all the upcoming frameworks, tools and techniques and probably everything technical. Take a look on our website here, and you will get to know more about us. Thank me later to introducing you to such an innovative site, you know we accept these appreciations like everyone does (damn the hunger for this recognition, well it is needed, at least for writers :)).

And, excuse me for dragging you away from the topic. So, we were talking about Angular 6 updates or rather the version update. If you are a developer and love the platform, it’s the perfect time to pour your champagne out, and in case you are an informed user, the updates will help you to enrich your knowledge around Angular 6.

We are even more excited because this is the first release that brings together the insights on the Framework, Material, and CLI. The new version release of Angular focuses more on the toolchain, and less on the framework and the Angular team also seems to synchronize the major versions including @angular/core, @angular/common, @angular/compiler, etc. for framework packages. The series of updates that came along with Angular 6Let me quote what Stephen Fluin Developer Advocate for Angular @ Google has quoted in his blogpost, “The minor and patch releases for these projects will be issued based on the project’s needs.” he talked prominently on the new release and here are the excerpts on the same.

It is fresh out of the oven Angular 6 update. The new Angular command line or CLI evaluates the package.json and makes of the component of Angular to bring up updates to the applications. On the matter, Stephen Fluin Developer blog quotes, it will “help you adopt the right version of dependencies, and keep your dependencies in sync, but 3rd parties can provide update scripts using schematics“. That states the package.json won’t replace the package manager. ng update either uses npm or yarn in order to manage the dependency. ng update can also use apply needed transformation in order to manage the project.

It is an added capability in the new Angular version in order to add new features into the project easily. The feature uses packages to manage and download the dependencies that Stephen Fluin states as “download new dependencies and invoke an installation script (implemented as a schematic) which can update your project with configuration changes, add additional dependencies (e.g. polyfills), or scaffold package-specific initialization code.” 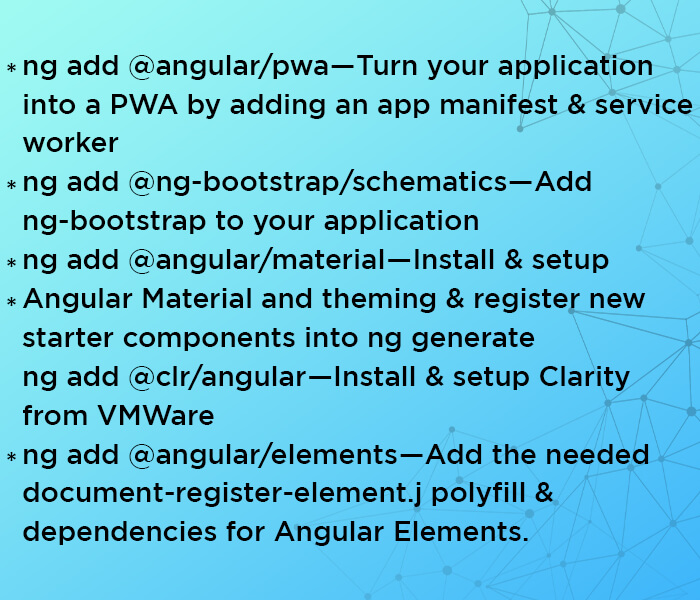 These supporting commands will help to add new functionalities on the ng applications. The feature is a build optimization step, which ensures unused code doesn’t get used in the final bundle. The Ivy renderer is taking tree shaking to a whole new level.

Instead of taking the path of rendering the template data to pass it into an improve renderer that will have the capacity to generate template instructions directly. It thus indicates that there will be much smaller bundles and faster startup time. The generated instructions are easy to read, understand, and debug. And, it’s entirely developer’s benefit to use the Ivy renderer as it allows for things like breakpoints in your template, meaning “stack trace heaven.”

With this new Angular 6 offering, once you have run ng add @angular/material in order to add material to an existing application, there will be 3 new components generated automatically after the command.

There is an additional feature to generate a starter component. The component includes a toolbar with the app name and the side navigation. This component is responsive.

It will create this starter component: There are a few innovative changes in RxJS v6 in addition to a backward compatibility package rxjs-compat in order keep your app working. And the added advantage is it’s more prominent especially when we talk about the tree-shakable component. This would ensure that your production bundle will only have those pieces of RxJS v6 that you use.

As per the previous announcement of Angular team only v4 and v6 release was supposed to have the goodness of LTS release but the news to keep into the mind is the long term support has been extended to all the major releases right from v4. There will be support for critical bug fixes and security patches.

This is all about the major Angular 6 release. The added components are great for the developers who work on this open-source web app framework. We have tried to add a few Angular 6 components in the write-up with a promise to cover all the updates in detail in a new write-up. The newly added Angular 6 functionalities seem pretty functional for every developer and in case, you love going through these codes then this Angular offering has just been rolled out for you.

NEXT 8 Key Tips to Become an App Developer in 2021

Convert Objective-C App To Swift With Minimum Effort in 2021