Symfony Vs Laravel: Which Is The Better Framework 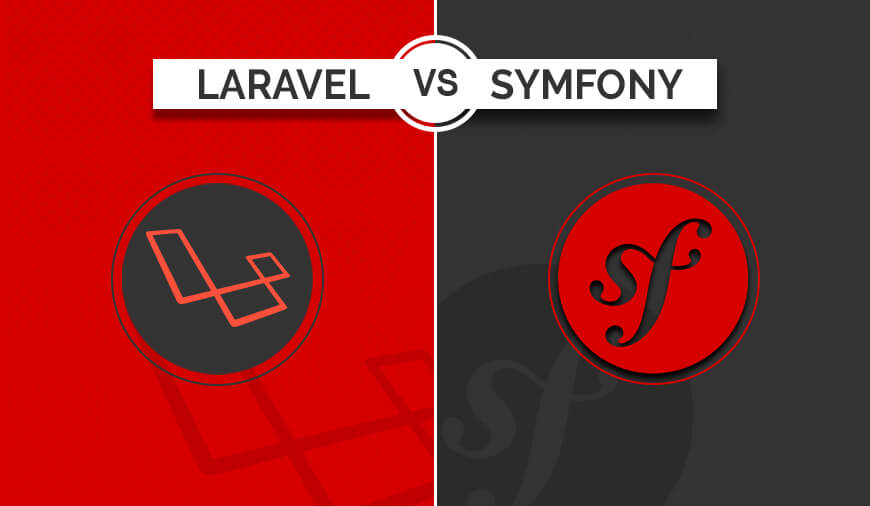 When it comes to the development of a website in the limited time the developers, look out for the PHP frameworks. These tools are around here for a long time to ease the work of developers. You will find a number of tools that help in developing a website by saving time on repetitive actions. When it comes to PHP tools, Symfony and Laravel are the two best tools that are preferred by the experienced developers.

However, choosing between these two is the toughest call for the developers. To make the right decision, we need to go through the Symfony Vs. Laravel debate considering what each PHP framework has to offer.

Benefits of using a framework at first place:

About Symfony and Laravel

Similarities Between Symfony and Laravel

The language on which the tool is based on plays a very important role while using it. You may be thinking that Symfony and Laravel use PHP, so both of them have the same programming language. However, there is a slight change in both regarding the programming language. Symfony uses the common PHP language, which means it's written only on the universal code that could be modified using the syntax.

Every language comes with some methods and traits that need to use in the programming and so does PHP. Laravel uses these traits and methods as it is written using the universal codes of PHP. This makes the codes smaller without any repetitive lines, easier to understand, and simply useable by the developers.

Both the framework uses a different approach to access the data while building the web app. Where Symfony uses Doctrine, Laravel goes for Eloquent. Now, there are two things to look for, one is the migration and the other is data access in these frameworks.

Symfony uses the Doctrine, so you need to create the repositories every time you want the app to access data, this could lead to large and complicated repositories. However, the work in Eloquent is easy and fluid as it uses the SQL functions for most of the actions, so you need to have a basic SQL knowledge.

Using Eloquent is better as in Doctrine most of the time your function will end up as an error, however, Eloquent even parse the most meaningless request into some accessible SQL function that saves your time and effort.

When it comes to crafting the codes in PHP frameworks, Symfony is considered as the best as it contains various reusable codes and offers modularity. Both Symfony and Laravel are based on MVC architect to construct the codes for web applications. But, Symfony is better for the complex and big projects as developers can use various components in a single project via modular style.

Symfony and Laravel both are template engines where Symfony has Twig and Blade are for Laravel. The blade is better than Twig as it has code reusability, you aren't required to write the same function twice in Blade, unlike Twig.

Another similarity that you will spot between Symfony and Laravel is the core, both the PHP frameworks are built on the top of the libraries. Both the frameworks call the libraries named “Symfony components,” but that doesn't mean that these are totally identical. Where Symfony calls its libraries directly,

Laravel adds its own elements, patching issue, and functionality to the components that might be missing in the Symfony components. So here I think the points go in the bag of both the frameworks.

Talking about the performance of these frameworks we need to have a look at the output of each tool in terms of loading speed of the page. We have known that Laravel and Symfony both caching the views, however,

Symfony also caching the source code. But, the Laravel is made using the Symfony, that’s the improvement. The average loading time for the websites on Larval is found to be 60 milliseconds where Symfony is 250 milliseconds.

The numbers above have already proven that Larval is better than Symfony on more points. Laravel is suitable for large projects that you need to finish under a shorter timeline with effective results. However, Symfony is best for the more complicated and time taking web application projects.

For more information on mobile app development and PHP frameworks, you can comment below and we at ‘MobileAppDaily,’ will try to assist you with the same.

PREVIOUS 7 Advantages Of Mobile Apps For Your Business

NEXT React Vs Angular: An In-depth Comparison Between Two Robust Frameworks

The Role of Big Data in Mobile App Development

The launch of Siri by Apple in the year October 2011 marked the beginning of Artificial Intelligence in mobile apps. Prior to that, AI was only used in iPhone application development. But since the year 2011, AI has experienced tremendous growth and unlocked immense possibilities in various

Everything You Need To Know About PhoneGap To Create An App

PhoneGap was originally bought out by the tech giant Adobe as an Open Source project.PhoneGap is a framework for the purpose of Mobile App Development that is based on an open source project i.e. Apache Cordova. With PhoneGap, the application developers can easily write codes for mobile apps jus

10 Steps to Successfully Develop an App

Today the business world is influenced by mobile app technology and its benefits. Every company is aware of the significance of app strategy in terms of revenue and reaching out to the customers.The competition is getting tougher every day with more and more app development companies.