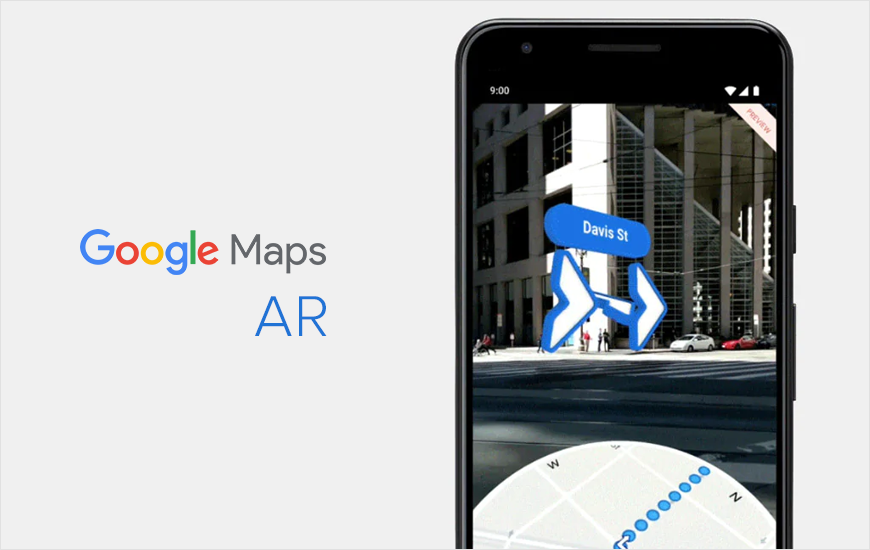 As the global AR market soars towards $70-$75 billion in revenue by 2023 and tech giants such as Apple, Adobe, Facebook invest heavily in augmented reality ideas.

How can we expect Google to sit back?

To get ahead in the race, Google announced today that Google Maps has a new ‘Live View’ feature that allows a user to get easy and simple navigations to their destinations.

Once on the app, all you need to do is follow the big blue arrow and perfectly readable street markers in real-time as seen in the image below.

How do I use ‘Live View’ feature on Google Maps?

To enable the ‘Live View’ feature-

“We’ve tested Live View with the Local Guides and Pixel community over the past few months, and are now expanding the beta to Android and iOS devices that support ARCore and ARKit starting this week.

The latest feature is still in a beta mode while the stable version is expected to release later this year. But for a tech enthusiast, there are plenty of amazing AR Apps that users can try until Google Maps gets its final version.

Google Maps was started as a C++ desktop program by the Danish brothers, Lars and Jens Eilstrup Rasmussen, which was later acquired by Google in October 2004. Since then, Google maps have released new updates on a regular basis.

In the previous month, it added the speeding limit and speed camera alerts. Now, Google Maps has introduced a new feature that will improve SOS alerts by giving a better and more detailed visualizations warnings about earthquakes, floods, and hurricanes.

Google Maps most popular feature is Street View, but it also has more useful tools such as SOS alerts that are built to give warnings during a time of crisis.

The Google Maps app was used to inform users at the time of the natural disaster and share news stories related to the event. It also gives emergency phone numbers.

The company elaborated that with the help of a new update, people will see a "crisis notification card" if their area gets hit by a natural disaster. For example, if a hurricane is going to hit your area then a Google Maps warning will give you the storm's predicted trajectory with the what time it is expected to hit that will help you to react immediately. In addition, Google Maps users will also be allowed to upload a graphic. Google maps new feature will be released later this summer. Elaborating more about the release date on different platforms, Google stated,

In a country like India, where over 20 percent of global flood-related fatalities occur, Google Maps' new feature will display flood forecasts to indicate where flooding has taken place and in addition, it will show likely severity in different regions.

Three ways in which Google Maps new updates can help you to get the information quickly:

With the help of crisis notification cards on Google Maps, users can share live locations with their family and friends for an unlimited time.

The Google Maps app has made its debut on Android and iOS in 2008 and 2012 respectively and boasts a load of functionality. Since its launch, it has become a must-to-have app for everyone who likes to commute on a daily basis. If these types of helpful updates continue to be released by Google, it will become more difficult for its competitors such as Apple Maps to move ahead with Google Maps.

NEXT Noise App, By Apple, Protects You From Potential Hearing Loss