Know the secrets of how to start your own app for successful startup companies. 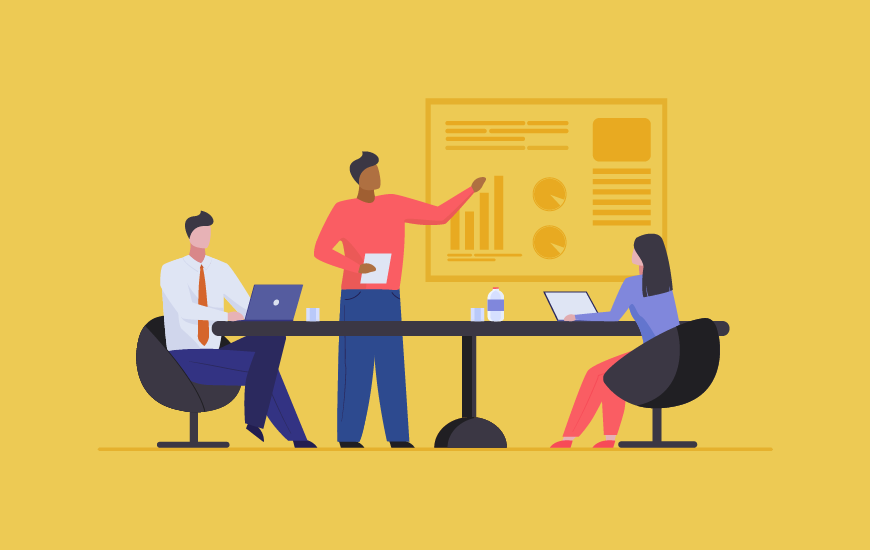 Mobile applications have dominated the world with their ease of operation and high productivity. They have helped in reducing the cost of operations, make systems easy and affordable, and help connect the customers directly.

And we are not just talking about the mobile apps here; this includes web applications as well. Due to the rise in the App Development market, hundreds and thousands are switching their career paths and entering the app business.

But then why are people failing in setting up an effective app business? Many reasons can lead to the failure of the app business, but mainly it all summons up to not putting efforts in the right place.

This is the Statista report, showcasing the number of annual app loads that were done in the year 2017, and along with that it also presents an estimation of worldwide mobile app downloads for the year 2018 and 2022. 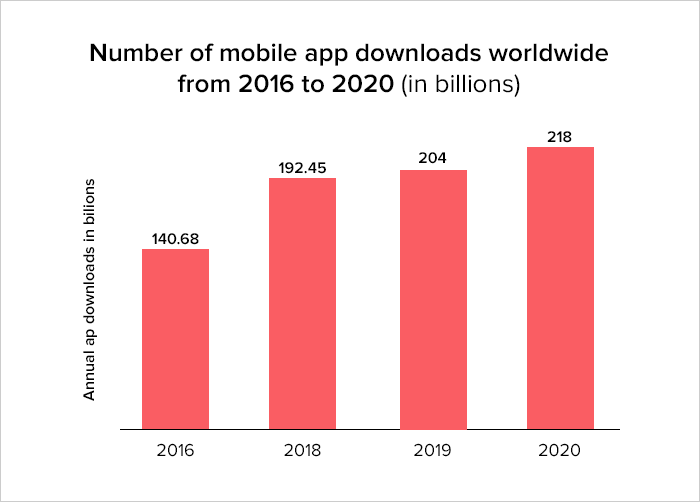 According to this forecast report, here are a few key stats:

Here, we will explain to you the step-by-step process of starting an app business. Let's have a look at some statistics to get an insight into the competition.
statistics

The Contractiq stated the below-mentioned statics in one of their recent reports:

The Web and Mobile Application industry is a multi-billion dollar industry that is worth hundreds of billions. What are you waiting for to join this business? If you think that a majority of app concepts have already been developed then you are wrong.

Because countless applications are yet to be built and introduced in the app stores,  the scope is endless. Let's move:

How To Start An App Business, Step-by-Step guide:

Here is the step-by-step process giving insights into how to start your own app:

1. Work with your idea

Every process starts with a thought, and every business starts with an idea! This is the very first step, and the steps after it will directly or indirectly depend on the idea. Your idea regarding the app will act as a foundation base for your business. Did you know that only 5% of application development businesses end up being successful? You don't have to be concrete about your app idea, be flexible about it. It happens many times that the initial idea of starting an app business was something different than the idea that has been finalized in the end stages of the process. Your idea should be inspired by providing a solution to a common issue that is faced by quite several people. It can be related to healthcare, or lifestyle, or just for entertainment purposes.

2. Invest in research and development

Once the idea is finalized, the next step is to do the R&D and by that, I mean a ton of research. There may be times when your ideas might not be the best when looked at practically. But that's not a big deal to constantly worry about. To overcome this issue, all you need to do is explore the market thoroughly to make up for your lack of experience in understanding the working of a web or mobile application business. In today's world, an application is an answer to all your queries. By the way, I am pretty sure many of you don't know that Google Play itself is an app. So,  if you need a ride to go somewhere or want to order a milkshake from your favorite cafe, all these issues can be now solved with the help of an app. In case you’re having second thoughts and doubts regarding the whole process of starting a business, Remember that you will find an excessive amount of information regarding coding tutorials, tools for SEO and market analysis, etc.

3. Choosing the Platform: Android vs iOS

According to a report by Statista, the worldwide smartphone unit shipment for the year 2017 was 1.52 billion units, and it’s predicted that in the next four to five years, this number will reach up to 1.74 billion. Choosing a suitable platform for your app is the thing to do. In the early years, when app development initially came into the limelight, there were several platforms to choose from. But now, after all these years, the majority of the market share is divided between the Android and the iOS platform.

We can say that the Windows platform is also available in the market but when compared to Android and iOS, Windows is lagging with a huge difference between them. The app stores of the iOS platform and Android platform are way different from each other so pick a platform once you are sure of your decision.

Looking at some of the previous reports, the statistics show that the Google Play Store is still the highest-ranking store when it comes to the yearly number of app downloads. In the year 2016, the difference between the annual app download count between the iOS and Android app stores was more than 30 billion app downloads.

But, if we look from the revenue perspective then Apple has given itself a steady lead in the race from the past few years. As the yearly revenue for Google Play Store was 17 billion dollars and the annual revenue of Apple's app store was approximately 34 billion dollars, according to the statistics reports for the year 2016.

Pros of the Android platform:

Once you have now chosen the platform that you want to move forward with, the next stage is the phase of development. This is the phase where team building to create an app for business takes place i.e. search for reliable partners to work with and build a team with them.

This search of partners also depends on creating an app for your business idea, and according to your requirement, start looking for suitable members. These business partners may be programmers, app designers, application developers, content writers, and many more. The team-building stage is the break it and make it part, so try not to hurry when selecting reliable teammates for your business.

If you want to know the actual Cost Of Mobile App Development then these tables will give you an appropriate idea of the development cost for Android as well as iOS platforms.

Below are some of the possibilities of building a team:

One thing that you would have to keep in mind is that the pricing tends to change in respect to the location of the developers/companies and also according to the complexity level of the app development and designing project.

Now that you have your team with you, it's time to layout a build your own business app plan regarding the investment and various other factors. Try to collect as many relevant insights you can gain in the market that you are targeting, this will come in handy in avoiding extra expenses related to the budget.

Keep in mind while creating your business plan that it has to be a combination of effective tactics and efficient strategy. A strategy may require time to become fully functional that's why you should initially make short-term plans with your strategy. And once the short-term plans gets fulfilled, then move on to the long-term plans.

To get investment for your app business, below are some of the main options:

In this section, you and your app business partners will be taking a test drive of the app that has been built to launch your app development business. This is a very important step because in this part the improvements of the app take place. After the app has been tested, feedback is sent back to the development and designing team. Based on this feedback, further changes are made in the application, so that, by the time it hits the market, it is free of any issues. To make this process more smooth, you can ask your development team to create an app for business as an interactive prototype to test out the prominent features and framework of your app.

Monetization is the reality of the app industry because without monetizing your app business, how you will be able to earn revenue.

So, here are some of the ways you can monetize your app:

This is the last and final step in the whole process of starting your own app business and without this last step, all your hard work can go in vain. This is because in today's world without good marketing and constant promotion, a product or service can never reach its true value. 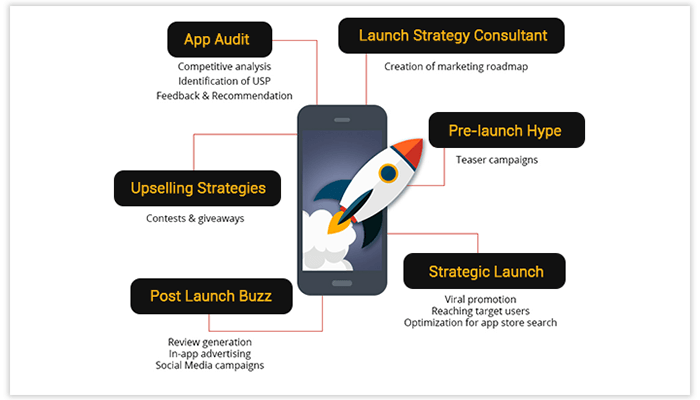 The above image shows some of the most effective strategies for mobile app marketing like Social media campaigns, teaser campaigns, viral promotion, and many more.

Make sure you keep an eye on your competitors' activities as well; marketing and promotion are indeed costly services, but when used correctly, they are worth it.

Your job doesn't end here, even after the app marketing strategies are applied, you still need to keep a track of the app performance concerning various other factors. Note down the positive as well as negative reviews that customers are leaving describing your services. These reviews will act as a base for your next app update or version release.

So, these are some of the vital steps of creating an app from scratch, explaining how to start an app business, and also consider important steps before building an app. We hope that you got the insight that you were looking for. Still, if you have any queries or if you want details on top app development companies, get in touch with MobileAppDaily.

PREVIOUS How Is GDPR Causing Disturbance In Location-Based Marketing?

NEXT How To Promote Mobile App Marketing On Quora

How much does the Android app development cost?

Before actually diving into how you're gonna create your Android app. You probably have two questions in your mind, how much an android app development cost? And on what factors does it depend? Let’s be honest, every app is unique, and the cost estimation depends on a variety of f

We’re relying more and more on mobile apps with each passing day. They’re part of everything we do, everywhere we go, and everyone we talk to. That’s a ripe opportunity, but with great opportunity comes great challenges, especially when it comes to scale.Mobile apps have change

When you run a mobile app that collects personal information from its users, then you need a Privacy Policy to abide by the legislation around the world. However, even if your app does not precisely collect personal data, you may still need a Privacy Policy, primarily when you utilize a third-party