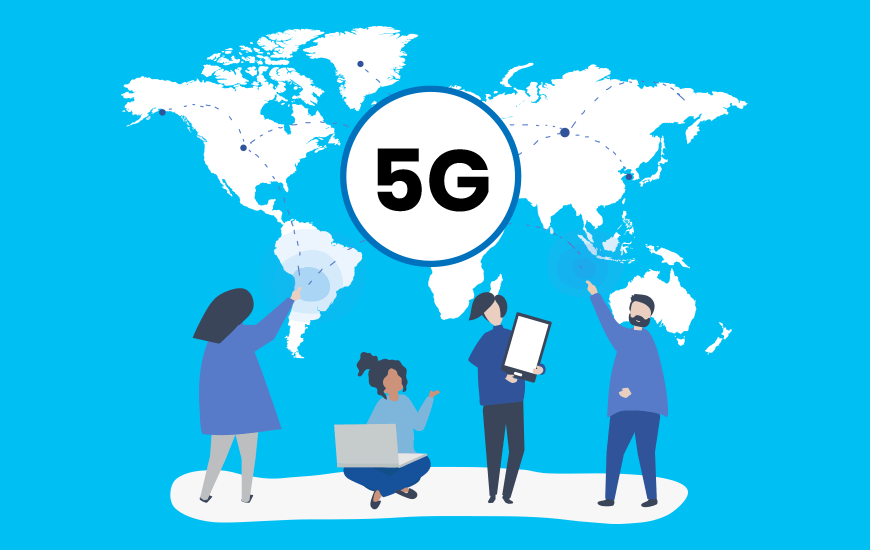 The 5G Technology can be referred to as the next-in-line to 4G (LTE/WiMax), the current fastest mobile communication standard which is also known as the Fifth Generation wireless cellular network. 5G is not only aiming to lower latency, but it also boasts a theoretical maximum speed of 20 Gigabits per second which is way faster than the quickest LTE (Long-Term Evolution) network today.

With undergoing development, 5G technology is expected to get the show on the road by 2020. That can seem like a long wait, but it still remains an ambitious timeline. According to Technology Business Research Inc., network operators are expected to spend billions of dollars on 5G capital expenses by 2030.

5G brings new aspects to the table. For example, if you want to download a 2-hour movie; while 4G can do the work in 8 minutes, with the help of 5G, you will be able to download the whole movie in just 3.6 seconds.

"It's not only going to be we humans who will be consuming services. There’s going to be an awful lot of software ingesting these services."

How Fast are 5G networks?

The hype around 5G technology is growing at an exponential rate since it was first introduced in the year 2012. The 5G protocols are mainly centered around the idea that the Internet of things (IoT), i.e. connected devices that enable self-driving cars, automated homes, and more is going to become a necessity in the near future. It’s like upgrading your data connection from a garden hose to a fire hose - the difference is going to be more than just noticeable.

The 5G network innovation is happening at higher frequencies, called millimeter waves. For now, only relatively narrow channels are available in existing cellular brands because the spectrum is too busy and heavily used.

5G Networks has the potential to transform the Internet. It will also provide a much more personalized Web experience using a technique called Network Slicing. 4G responds to our command in under 50 milliseconds, while 5G is potentially designed to react in just one millisecond, which is 400x faster than the speed that you blink.

Although there are quite a few new and emerging technologies that can likely be applied, their standards haven't been shaped as per the 5G protocols yet. For instance, the higher-frequency bands from 3.5 GHz (gigahertz) to 25 GHz have a lot of capacity whereas their shorter wavelengths indicate that their range is lower. This means that they can be blocked by physical objects more easily.

Will 5G work on your 4G/LTE phone?

Yes, you will be able to access 5G network on your 4G/LTE (Long-Term Evolution) smartphones but in the coming year, we are likely to witness companies releasing their own 5G smartphone variants to utilize this technology to the fullest.

The new 5G networks, which are meant to start rolling out by the end of 2019, will offer much faster speed and way better connectivity for end-users. But in addition to that, a majority of people won’t be able to access the 5G technology since it will only be available in a few restricted markets during its initial phase.

Here is a list featuring some of the 5G ready phones that are rumored to be launching in the market soon:

When it comes to 5G roll-out, there are many major network operators that have come forward with statements regarding their status of the 5G technology. Industry majors like Sprint, AT&T, and Verizon are the network operators that have promised to roll-out 5G devices in the first half of 2019 in the United States. Along with this, T-Mobile is said to launch a nationwide network by the end of 2020.

Apart from this users might no longer need faster 5G services, depending on the way that they use their phones currently.

Although 2020 is a likely time frame to debut the 5G network for its first commercial use, some countries are looking to jump off the starting block as early as possible.

Below are some of the nations looking forward to kick-starting their services with the 5G launch:

We are currently living in a world that is completely turning mobile and that is leading us to consume more data every year, especially as the popularity of video as well as music streaming increases. This has also resulted in congestion of existing spectrum bands thus, leading to breakdowns in various services.

5G technology is a high speed/capacity network which will evolve the mobile industry in 2020. It is going to overhaul the entire infrastructure of wireless technology.

We expect to witness this splendid transformation of technology sooner than later. So guys, buckle up your seat belt and get ready to zoom into the future of communication with MobileAppDaily. Also, make sure you click on the ‘Subscribe’ button to never miss another update from us.

NEXT What’s New with Trading Platforms In 2020?

Google is on a new mission and all that the giant is doing is just for the sake of users digital wellbeing. Does that sound something innovative to you? Whether you have heard of something like this before or not, Google is going to make it pretty much a reality with the feature termed as “tak