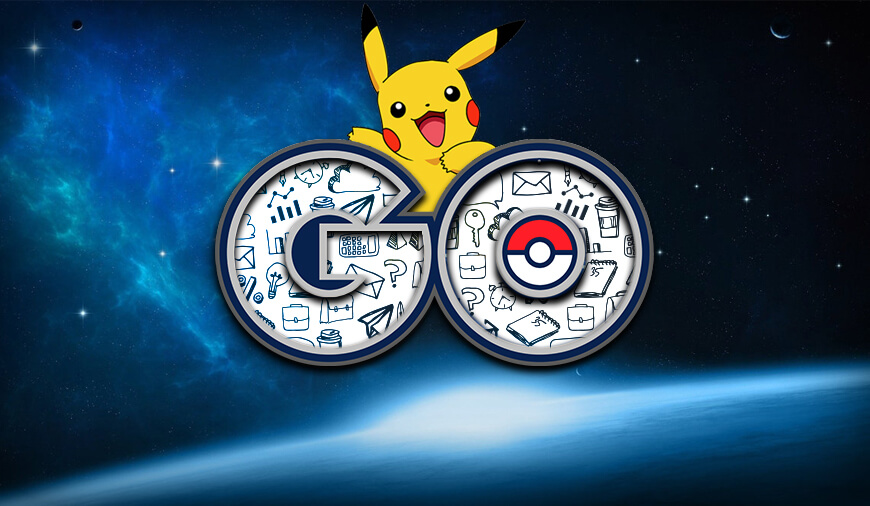 The augmented reality-based mobile game topped the app store charts overnight and made a huge fan following. The game was a success and captured the attention of millions across the globe within a short period of time. Leveraging the Pokemon animated series legacy the game offers an engaging gaming experience.

With the aim to capture the Pokemon you need to walk through the streets or places for finding the wild Pokemon via real-time map navigation. The game was gone so much viral that people started walking unconsciously on the streets while looking at the Pokeradar in their phones. The situation went so serious that the government of many states have to issue notice for the pedestrians to avoid playing Pokemon GO on the busy roads. This kind of craze can only be dreamed of by any mobile game developer that users forget about their surroundings while playing the game.

However, Niantic, Inc converts this dream into reality with Pokemon GO. Here we have collected all the data, statistics and numbers that Pokemon GO has touched since its existence.

But, before the detailed stats of the game here are some basic information you should know about Pokemon GO.

Pokemon Go Interface & How Does It Work?

The game starts with you as the main character of the series holding the Pokeball in hand. If you are aware of the original cartoon series of the game, then you must know that it has ‘Ash’ as the protagonist. You will be guided with the inbuilt map showing the real-time direction of your surrounding. The map will show you the nearest pokemon that you can capture using the Pokeball. The AR gaming app uses the phone’s camera to show and capture the pokemon. 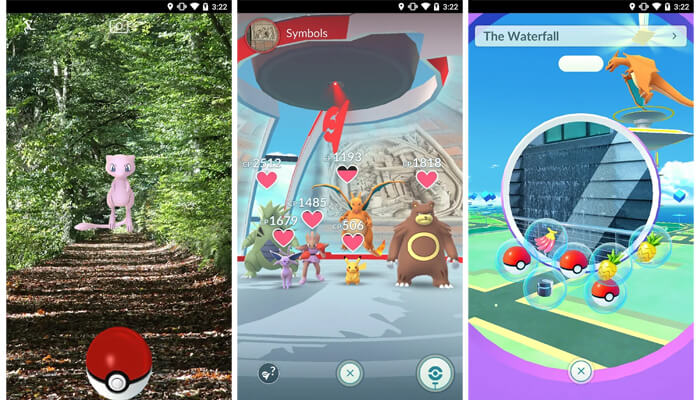 The success of an app defines by the popularity of the app, and that further depends upon the usage. The app requires a massive number of users to use it with the maximum number of interactions on a daily and monthly basis to get success like Pokemon GO.

The usage statistics of an app has a number of metrics like the number of downloads, user retention, time users spent of the app, daily active users and much more. These metrics are used as the parameters to measure an app's success.

The number of downloads is the most common metric to judge any app’s popularity in any App store. However, Pokemon GO has never had to worry about this count since the very first day of its launch. The gaming app was downloaded 6 million times in the US, New Zealand and Australia when released in July 2016. Due to sudden enormous downloads the company had to hold the other country release as the server was getting overloaded at that time. 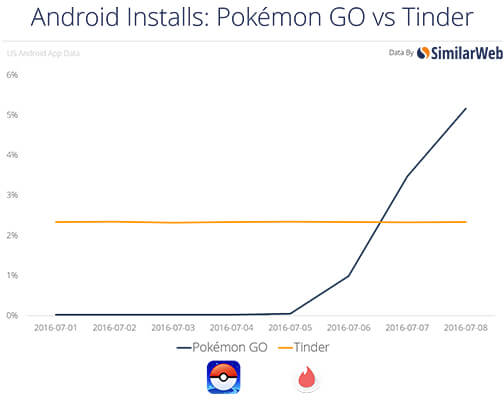 According to Apptopia, Pokemon GO has the total of 752 million downloads by March 2018. Only within the 6 days of release, Pokemon GO hit the highest downloads by any VR app in the history. With the global release, the number went only up exponentially and that made Pokemon GO on to topped both the leading app stores. 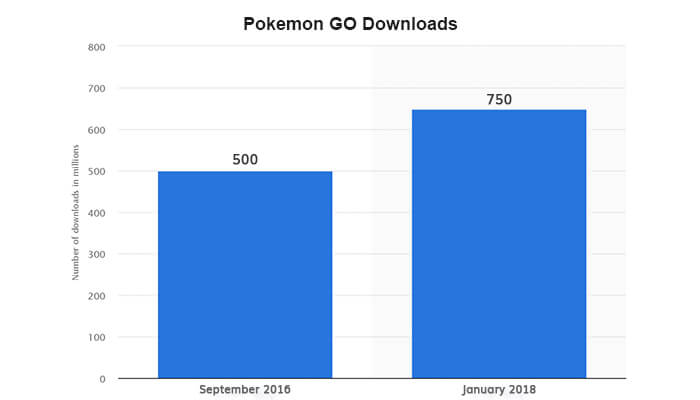 Here is the report of Pokemon GO downloads during the initial two weeks of release in the US. 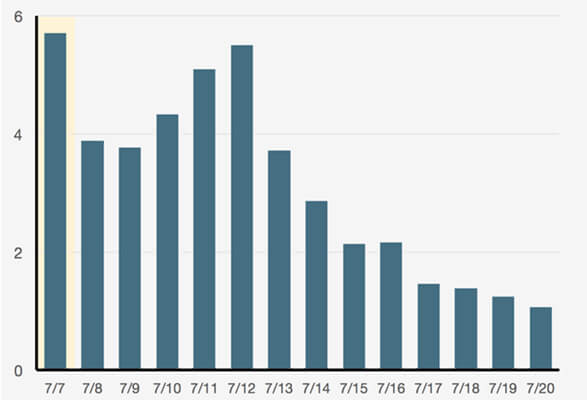 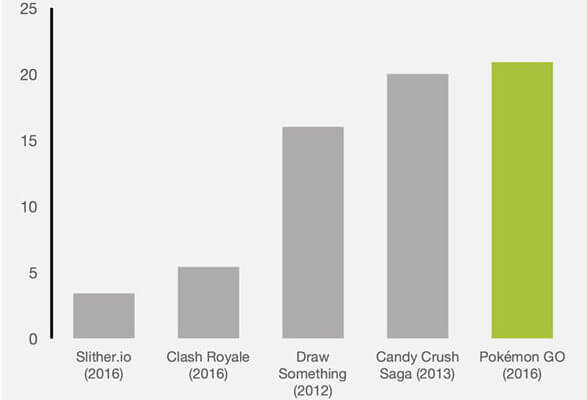 Some of the popular and successful apps failed to impress the users in the long run and lose their charm over the time. This is measured by counting the daily active users of an app that shows how many users are using the app on a regular basis. Before Pokemon GO, Candy Crush had the maximum number of DAU that was near to 20 million.

However, Pokemon became the first mobile game to have 20 million DAU by beating the Candy Crush with a small margin. Besides, the monthly active users, Pokemon GO also broke the records with 65 million MAU. Pokemon GO was the first gaming app that managed to get into the group of 3-5 apps that users can't go without even a single day. The game was counted as the most used app after Facebook, Instagram, Messenger, Whatsapp, and Snapchat. 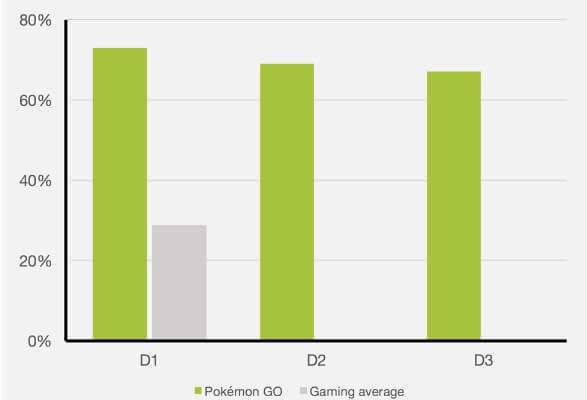 Retention rate is one of the important metrics that shows how your app is performing among the users. These parameters let us know that how long users are interested in your app after installing it. According to the reports, almost 60% of the users continue to use Pokemon GO after 3 days of downloading it. This means the app had the users retention rate of 60% compared to the average retention rate of the app industry that is 15% after 3 days.

According to YouGov, Pokemon GO has been downloaded by 35 million users since its launch in July 2016, and more 90% of those users are still playing it. The website also revealed the in-app purchases it has made over the period of time.

Pokemon GO Usage In The US The game is so addictive that users can't wait to go out and catch their Pokemons. The user’s excitement is proven by the time they spent on the game every single day. According to mobile app industry reports, in the US a user spend almost 3 hours per day on mobile apps. Pokemon GO managed to acquire almost 45 minutes of the Android users from that overall time span. With the maximum minutes of usage, Pokemon GO beats the most popular social media apps by a significant difference.

In the graph below you can see that Android users spent only 30 minutes on WhatsApp, 25 minutes on Instagram and 22 minutes on Snapchat per day. That’s pretty impressive for a gaming app to take over these popular social media apps. 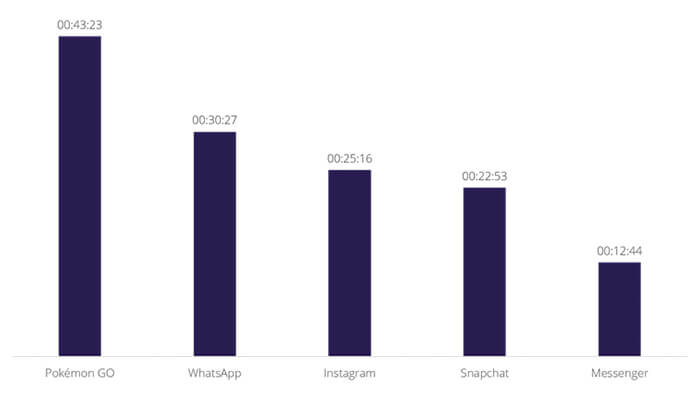 Moreover, App Annie also reported that Pokemon GO is the only app to get the maximum Android users’ time ever. According to the report, Pokemon GO accounted for 45% of overall time spent on Android games against the 55% time acquired by 19 games combinedly. 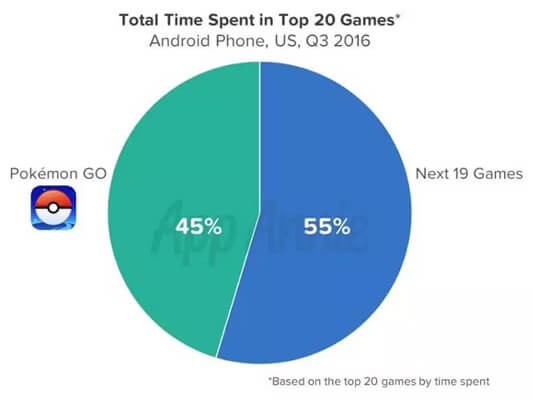 Every mobile app has its own targeted audience that also includes the specific generation who contribute to its success. Similar happened with the Pokemon GO initially the Millenials were the first who adopted the app with 55% proportion of the overall user base. Talking about the users with different age categories who invested more time in catching the Pikachu and Bulbasaur there are some interesting facts.

According to Adweek, age group 21-27 is the core demographic of the game with the maximum users. Out of this group, there are 43% men and 29% of women who have Pokemon GO on their smartphones. Along with this in a survey, it was revealed that 84% of the US users in the age group between 21-65 have accepted that they know about the Pokemon GO game. We have already told you that Pokemon was initially launched in the US, New Zealand and later it was spread across the other parts of the world. Now, the game is available in more than 56 countries. The Wikipedia graph shows that game is mostly available in major parts of Europe and Asia. However, Africa isn't affected that much by the game yet, but the company is planning to launch the game in more countries very soon. 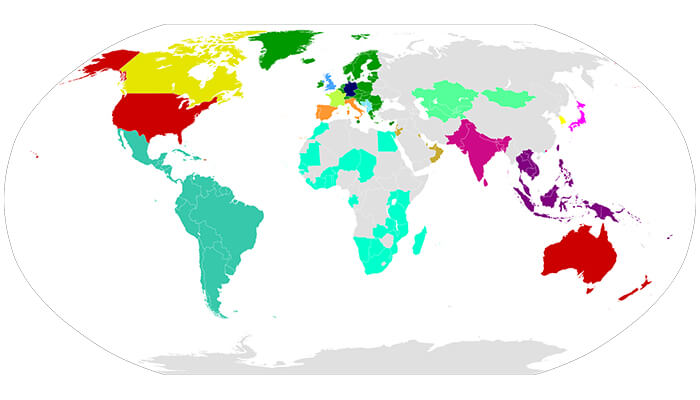 Where Google Play Store isn't that hard for a new addictive game to break the records, Apple App Store is the toughest to make it to the top position. However, it took only 13 hours to Pokemon GO to reach the top position in the gaming category of App Store. Since then the game remains on the top or sliding to third and second position for a couple of times. AppAnnie shared the App Store ranking details of Pokemon GO since its launch. You can see that Pokemon claimed the first position just next day of launch. Besides, it manages to hold the top position over a long time.

The recent data shared by Similarweb about the App store ranking of the Pokemon GO shows the running position to date. The graph shows the app’s ranking in the last one month. Pokemon holds 80th position in all categories of App Store and the spotted at 29th position n the game category by July 22, 2018. 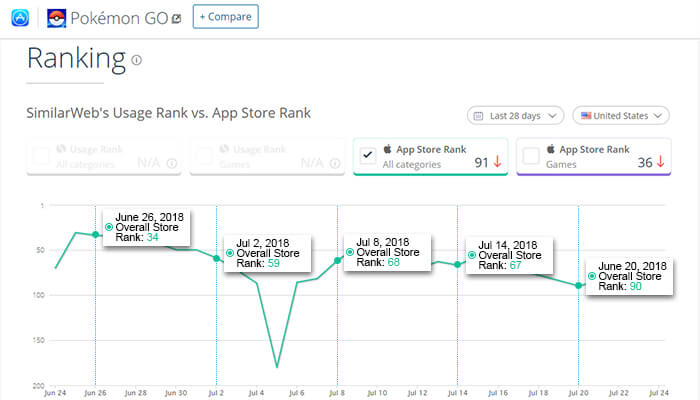 Pokemon revenue has recently surpassed the $ 1.8 billion milestone which is an exponential hike from $1 billion in January 2017. The overall revenue generated by the game comprises the 58% contribution of the Android and 42% of the iOS users. The United States and Japan are the topmost contributors by holding 34% and 28% respectively in the Pokemon GO overall revenue. Germany Taiwan and Great Britain are also among the top 5 countries that helped Pokemon GO to make billions. 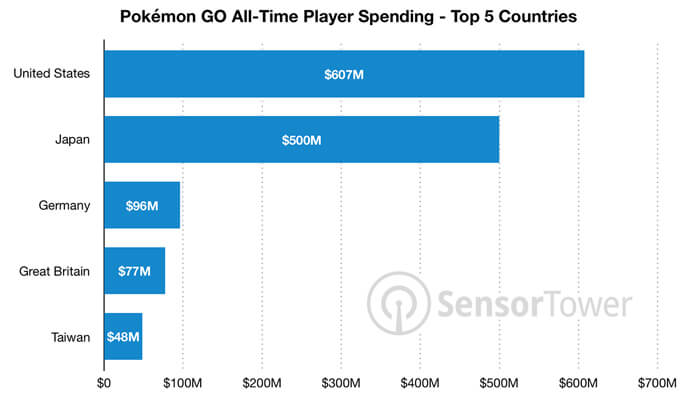 The revenue is the most important aspect of any mobile app owner as at the end of the day it's all about how much money does it make. Pokemon GO tuned out to be a money-making product for Niantic, Inc. The game easily surpassed the Candy Crush and other top games in generating revenue. Pokemon GO made $.25 per daily active user in comparison to Candy Crush Saga with $.20. In the blow revenue graph shared by SensorTower, you can see that the Japan launch helped the game to touch $200 million in revenue. Talking about the Pokemon GO investors, Nintendo is the biggest financial support for the game. The early investment in the game came out to be a golden deal for the gaming company. Nintendo holds 32% shares of Pokemon GO and undisclosed stakes at Niantic, Inch. Within the 2 days of gaming release date, Nintendo shares went high as by 50%. Moreover, the market value of Nintendo spiked up by $9 billion just after the five days of Pokemon GO release. What To Learn From Pokemon GO?

When we're at the edge of accepting that the mobile app industry has reached its highest point Pokemon GO happen. The game has proven that the mobile blended with the latest technology can do wonders. You just imagine and think beyond the normal limits to remove the barriers with the help of technology like AR and VR.

Niantic Inc targeted the popular Pokemon series to makes its game more interactive and catching the attention. So, it could be seen that the game is a perfect combination of new technology, innovative idea, and user’s interest to hit the jackpot.

Mobile apps are always with us, aren’t they?For instance, after making phone calls, the main purpose of smartphones is to run a wide range of mobile applications that can basically server any imaginable purpose.  According to Statista, by the year 2022, the total app downloads wil