The introduction of Blockchain of Things (BIoT) is going to revolutionize the world, making its mark to becoming the top emerging technology of this century. 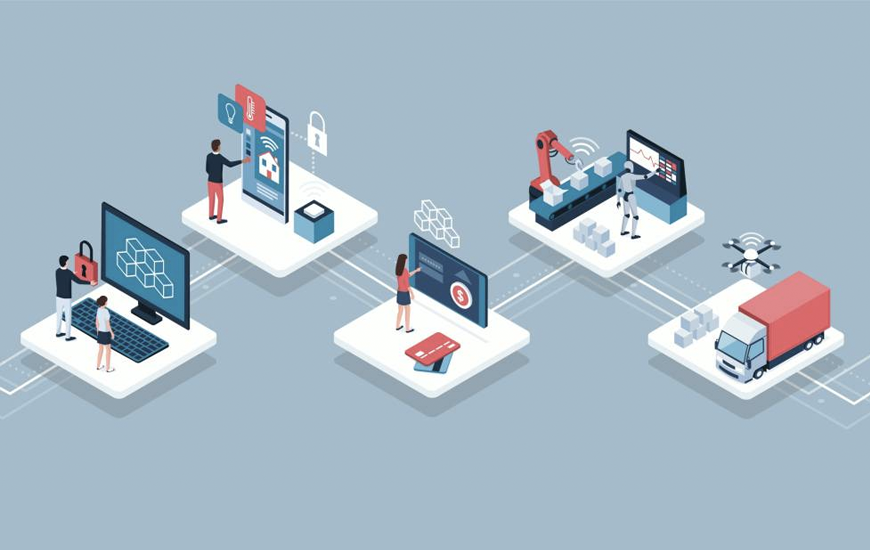 The entire tech-world is apprised of all the traditional and latest developmental technologies. Blockchain and IoT reside in the technology list of the most promising technologies that are ready to hit the technical grounds with their powerful development aspects. The world has already been introduced to the latest trends of Blockchain and IoT separately. But what might come as a surprise is that the amalgamation of these two ruling technologies has already hit various industries and is making the world more connected with revolutionizing technology embedded devices.

The prominence of this fusion is gaining momentum and both IoT and blockchain are heading towards changing the tech world with their real-time record handling functionality. Before diving deep into its functionalities, let’s take a quick glance at the various definitions associated.

Blockchain technology is a disruptive technology to solve the complex mathematical problems associated with cryptocurrency (like Bitcoin) transactions. The emergence of this mighty technology gave birth to a new level of computer transactions that are secure, well-identified, and authenticated. Bitcoin was initially introduced as a digital currency and now it’s covering the entire business landscape with its potential networking competency.

Introduction To Internet of Things (IoT)

The internet of things has become an ever-growing networking platform and is ultimately bringing the world far closer and more well-connected. Anything and everything on earth that has the access to get connected to the internet can be a part of this dynamic universe of IoT.

Basically, IoT is a system that has interconnected devices, digital, and mechanical machines. The devices might include those that come with unique identifiers (UIDs) to transfer information through the associated network. Also, IoT has given the opportunity to automatically handle devices and commands without the intervention of humans.

Why Blockchain Of Things?

What’s the need for merging Blockchain and Internet of Things to get viable interconnected products? Why can’t the technologies make it with their sole existence?

It’s common knowledge that both these technologies are leaving strong impressions on individuals and industries alike. But still, IoT alone isn’t powerful enough to address all critical challenges. Issues like security and authentication are still in the queue to be resolved when it comes to solely leveraging the power of IoT to build robust connected devices. This generates a significant need for Blockchain technology to secure an app based on IoT to allow people to avail the benefits of full-fledged interlinked devices.

Merging these two technologies helps the industry attain efficacious devices that have secure, verifiable, and most importantly, permanent solution to accumulate and record machine-processed data, without any human intervention. Industries have already witnessed the rapid fluctuations by using the devices based on Blockchain IoT and many predictions are also inclined to make the world aware of this radical technology transformation.

Here's a quick survey to get significant insights into IoT and Blockchain:

According to the stats gathered by Gartner, the estimated growth of IoT devices among people and industries has been increasing rapidly. The lump sum calculation was about 8.4 billion in the year ending 2017. And the surprising part is that the number is strongly predicted to increase by 20 billion by the year 2020 and it might rise to 500 billion by the end of the year 2030.

Blockchain app development services have gained a lot of prominence and haven’t stopped creating a buzz among technology geeks. Today, the adoption of blockchain technology is limitless, which is again rendering the way for IT sectors to use it and building robust and technically sound applications to facilitate the world.

Stats suggest that currently, around 69 percent of banks are utilizing blockchain technology with the Internet of Things in banking to grant customers far more secure, well-encrypted, and seamless services. When it comes to elaborating the success rates of blockchain, the scale is currently high and predicted to reach $20 billion by the year 2024.

Blockchain And IoT: Viable Alternatives To Get Rid Of Device Security Issues

The IoT system is not considered as safe as the blockchain powered devices. Any time, any failure can be encountered in IoT based devices. This is the reason blockchain came into the picture to make things easier for individuals and industries.

Issues that can be calmly tackled with the involvement of Blockchain in IoT:

How Does Blockchain Technology Pave A Seamless Path For IoT Device Safety?

Keeping IoT devices and applications safe and well-connected poses the need to introduce an external system that can control and manage issues associated with device security. The involvement of blockchain technology has helped achieve this.

Consolidating both technologies solves a plethora of technical problems and provides businesses an extremely new way to deal with device security and accessibility. All these reasons make it significant to integrate IoT with blockchain to get an ultimate combination called the Blockchain of Things (BIoT)..

Here’s how blending these giant technologies can solve several problems:

It’s not about who would win the war between blockchain and Internet of things. Instead, it’s all about curating a way to connect devices easily and make them more functional and secure.

Do you know: Blockchain has found applications in automotive, supply chains and logistics, sharing economy, and smart homes. The scale is increasing day by day to cover more industries in this battle of technology.

Blockchain of Things has opened doors to several opportunities for developers and businesses alike. Implementing this technology will streamline processes and introduce us to umpteen advantages, some of which are:

Besides the above-explained benefits, there are other proofs and use cases that make the blockchain technology an ideal grid to integrate with IoT devices. Gradually, the world will see the future aspects and advantages of blockchain for the internet of things.

Connecting with a trusted Blockchain development company will definitely offer you the privilege to experience robust devices that are developed at a rapid pace of IoT blockchain integration. With blockchain Internet of Things, industries can get the solutions that communicate prolifically and provide ventures the opportunity to boost the information security areas they are lacking in. To summarize, the evolution of BIoT or blockchain Internet of Things going to brighten the future of businesses and make it more secure.

Meanwhile, if questions like ‘what is the blockchain of things?’ and ‘how will it be impacting the tech industry?’ are bothering you, get in touch with our team at MobileAppDaily  and we will get back to you at the earliest. Subscribe to our network and stay tuned for more info around the subject.

NEXT The Wait Is Over: Spotify’s Android App Gets Long-Awaited Sleep Timer Feature