Apple Music vs Spotify - Which streaming service you should go for?

Apple Music vs Spotify 2022: This blog discusses the key differences between Spotify and Apple Music in terms of functionality, streaming quality, etc. 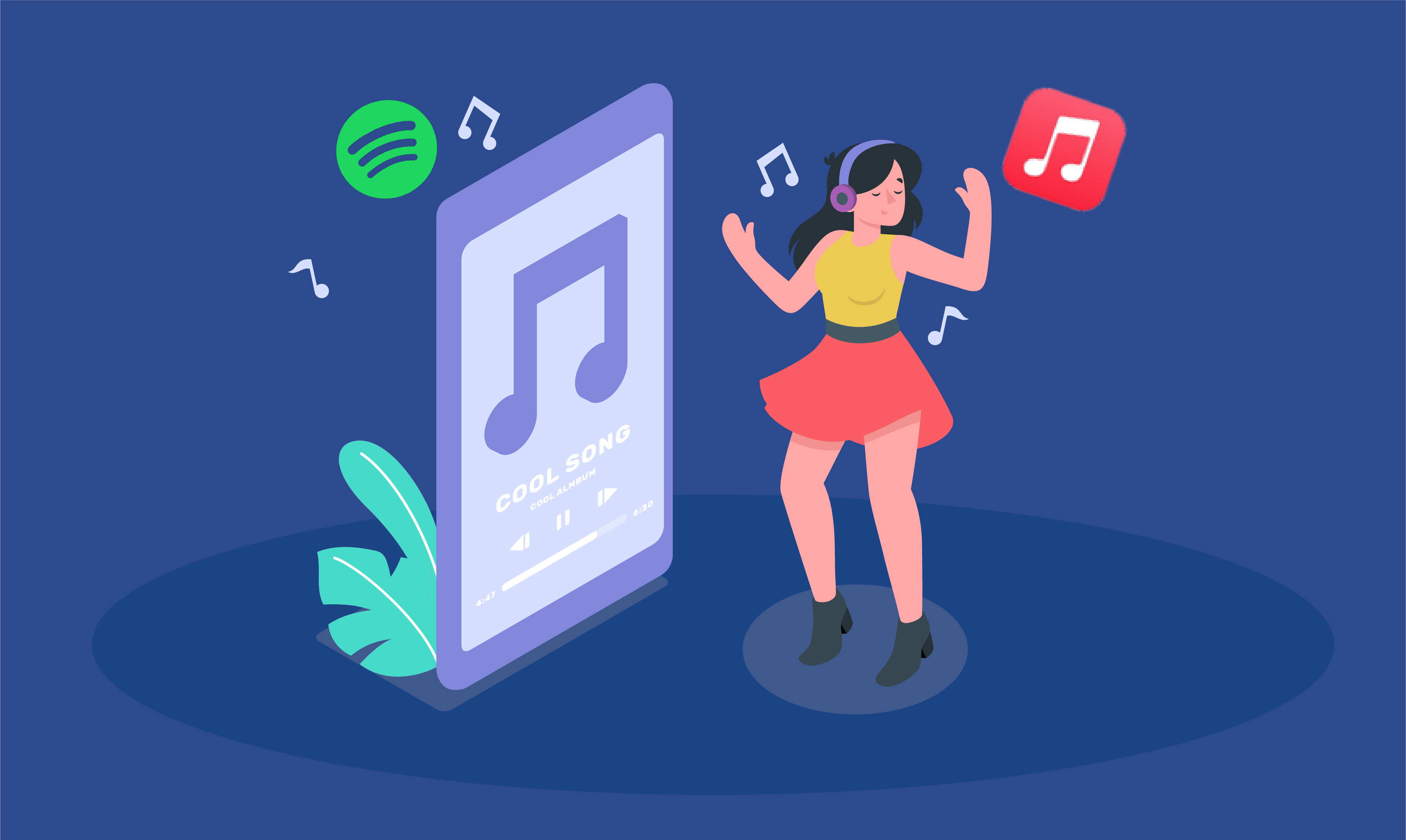 Well, one cannot deny the fact that Apple Music and Spotify are the two most popular music streaming apps out there! While both the apps offer a similar catalog of music, making a choice between these two services might be tad difficult for users. They often ask if Apple Music is better than Spotify or why Spotify is better than Apple Music? But there’s nothing to worry about as we are here to answer all your questions! So, without any further ado, let’s take a look at a detailed comparison of Apple Music and Spotify to see which of these juggernaut music-streaming services is right for you.

Key differences between Spotify and Apple Music in 2022

We have compared Apple Music and Spotify on the basis of price, features, availability, and more. Read the blog further to know differences between spotify and apple music in detail!

With an impressive 60 million songs library, Apple Music takes lead over Spotify's 50 million+ figure. Both the platforms offer early access to certain albums from time to time, and Apple Music sometimes even offers exclusives for certain music videos. Another notable feature of Apple Music is integration of the iTunes Library. With this feature, any music that you purchased via the iTunes Store or uploaded to iTunes Match will appear in your Apple Music library. So this means that you can browse your own music alongside Apple’s standard catalog.

Spotify also lets you play music from your device in the Spotify app, but it only works for local files. While Spotify offers podcasts within the app, Apple splits podcasts into a dedicated Podcasts app. If you wish to know more about this app, you can read the full review of the Spotify app here.

Talking about the library limit, Apple Music allows you to store as many as 1,00,000 songs, while Spotify has a limit of 10,000 songs.

When it comes to UI, Spotify has the best user interface. Its layout is much cleaner and better organized than Apple Music. The homepage of Spotify gives you instant access to content. When you open the app, you get recently played songs and playlists. It also provides you with suggestions on the basis of your listening habits.

Apple Music is also well-designed, but all the different tabs at the bottom of the screen tend to to get in the way of accessing your content. Apple Music’s interface divides its features into separate sections, rather than integrating them into a single scrollable page like Spotify. However, the colorful artwork makes Apple Music quite attractive to the eyes.  If you wish to know more about this app, you can read the full review of the Apple Music app here.

Both Spotify and Apple Music are available across popular devices such as iOS, Android, and Windows. However, Spotify also offers support with devices such as Smart TVs, Amazon devices, Samsung Gear, Xbox, PlayStation and more. Apple Music, on the other hand, works best with Apple products.

Spotify is one great app that provides a lot of useful tools for finding music according to your preferences and taste. This popular streaming service has tailored playlists like Discover Weekly and Release Radar that are automatically updated each week with new songs based on your listening habits. With Spotify, you can also create, share, and follow playlists of any kind — including those shared by friends — with a simple click. Additionally, with the Collaborative Playlist feature, you can create playlists with your friends.

Talking about Apple Music, when you register, you are required to tap on floating red circles highlighting different genres of music and artists so that the service can get a sense of your taste. Using the Account tab, you can reselect  your favorite genres and artists anytime.  Clicking on the 'For You' heart brings up a list of regularly updated playlists such as Get Up!, Chill, New Music, and Favourites. The playlists are curated by a “team of experts’’ as claimed by Apple. 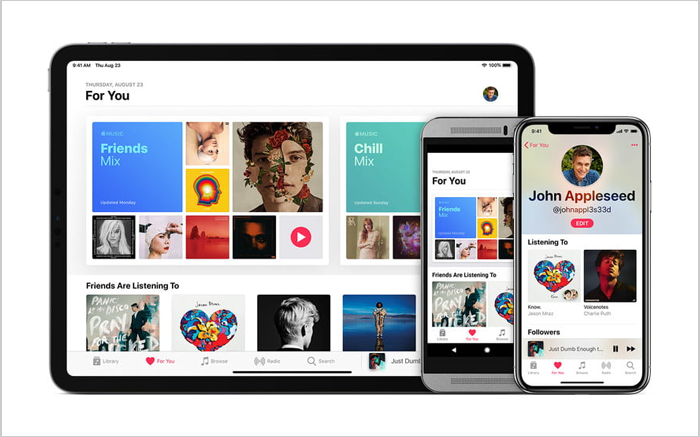 In our opinion, Spotify’s algorithmic recommendations for new music based on the listening habits of users is the most on-point. Also, Discover Weekly and Release Radar segments give it the edge over Apple Music. So, until Apple Music can compete with this algorithm-based approach, we will give Spotify the win.

Apple Music streams at 256Kbps in AAC (Advanced Audio Coding) format, while Spotify offers the Ogg Vorbis format at 320Kbps for Spotify Premium users, and up to 160Kbps for people with a free account. The streaming quality for both the apps are good for casual music lovers. However, if you live in an area with an unstable internet connection, you can rely on Spotify’s variable streaming quality options to get an uninterrupted playback experience. Spotify also lets Premium users download and save up to 10,000 songs at a time on up to five different devices. So, in the Apple Music vs Spotify quality race, Spotify is the winner for us. 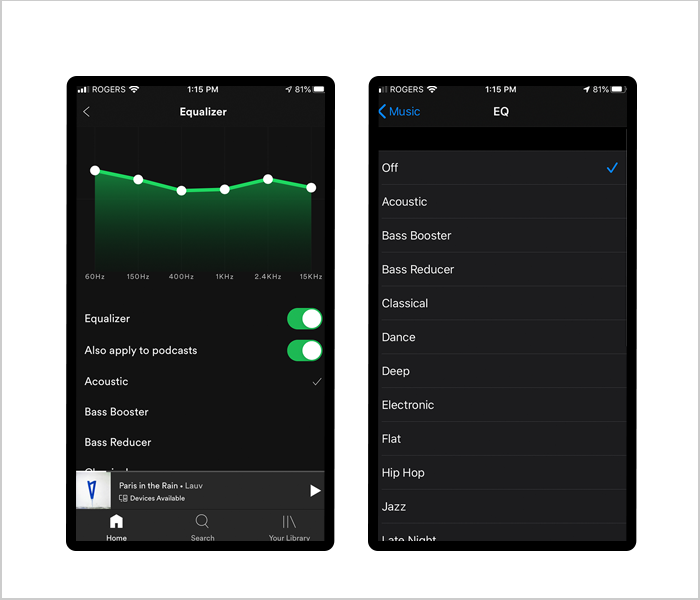 Spotify’s graphical equalizer allows you to tailor the sound of your music as per your preference. You also get several presets to choose from, if you like.

On the other hand, Apple Music doesn’t really offer any extensive EQ functionality. In fact, all you get are a list of EQ presets to choose from, which are only available to iOS users via the Settings app.

So, is Apple Music better than Spotify? After comparing both the streaming services, it won’t be wrong to say that Spotify tops the race. While Apple Music has come a long way since its inception, Spotify reigns supreme due to its easy accessibility and brilliantly fresh music discovery playlists. Apple Music's exclusive releases and human-curated playlists make it a tough competitor, but as of now, Spotify still has the edge.

What do you guys think about the Apple Music vs Spotify 2021 race? Let us know in the comments section below.

NEXT Headspace vs Calm - Which One Should You Choose?

10+ Use Of Mobile Apps In Education

Now, when smartphones are increasing in numbers with a rapid speed, usage of these devices in different sectors has increased as well. The modern educational sector has adapted technology to make the learning process easier for students. From digital classrooms to virtual classes, modern students ha

Steps Explaining How to Download Apps on Samsung Smart TV

Preinstalled apps on Samsung TV might not satisfy you if you are looking for apps with unique features. However, it might be tough for users to add apps to Samsung TV if they are not experienced with using it much. To solve this problem by answering “how to download an app on a smart TV?”

Online privacy and safety are getting more and more attention, as it should. People used to disregard the dangers of using the internet. Hackers or government snoopers are just some of the potential risks you may face in your online experience. No matter what your profile is, you may become a target