VR stands out to be the oldest of all three, and due to the same fact, VR is the most explored one also. 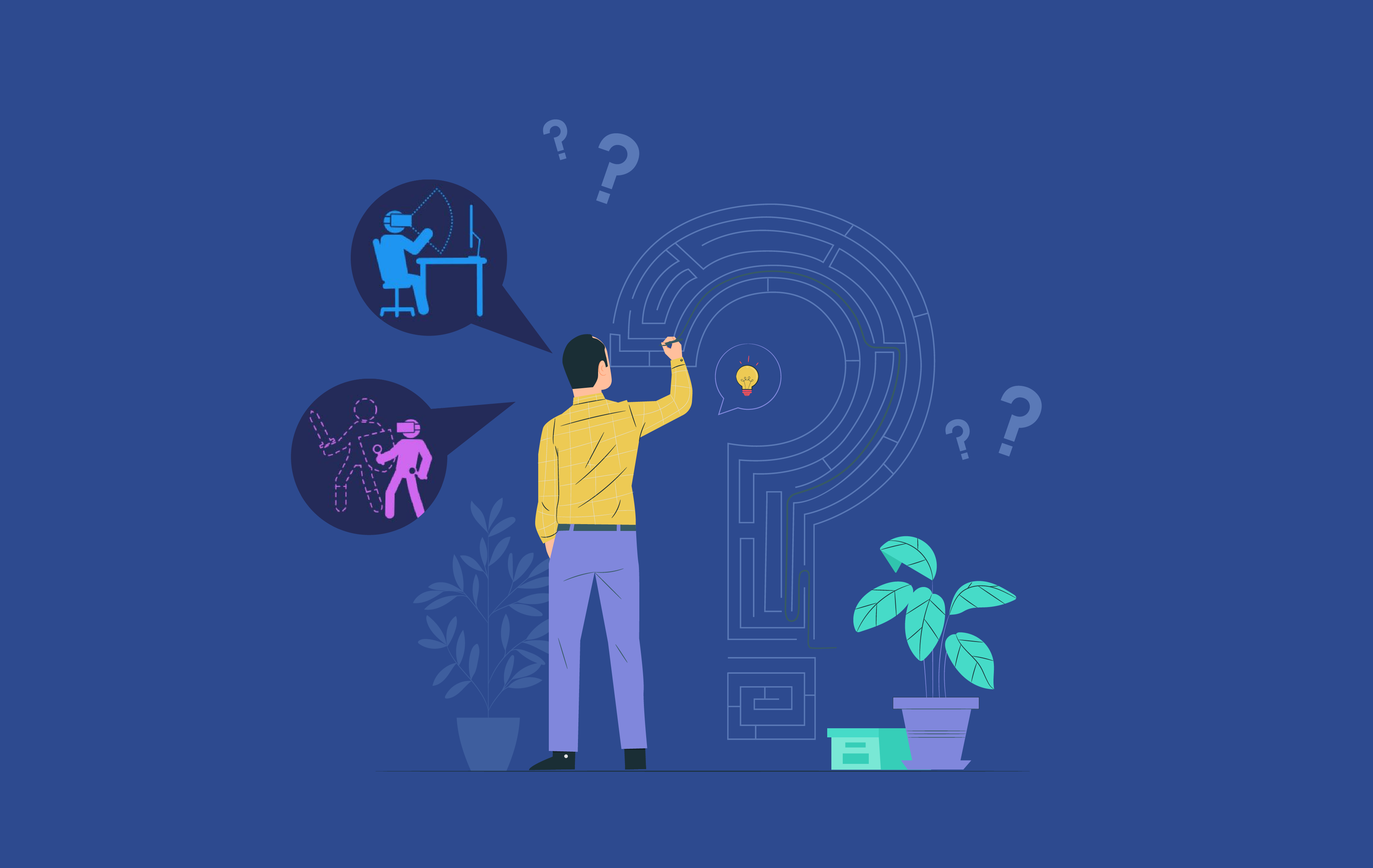 Since the last decade, technology has taken an upward turn that doesn’t look to slow down in the near future and it shouldn’t also stop because of new innovations and inventions that give us a chance to see beyond our static world. But sometimes, the threads of technology can entangle us from front and back.

If we take VR (Virtual Reality),  AR (Augmented Reality), and MR (Mixed Reality) into consideration, these sets of technologies might sound similar but are way apart in reality. VR stands out to be the oldest of all three, and due to the same fact, VR is the most explored one also.

Today, I will be talking about these three advanced technologies and explain to you in detail what they actually are. If you think, you know all about it, give it a try and let me know in the end if you missed anything. 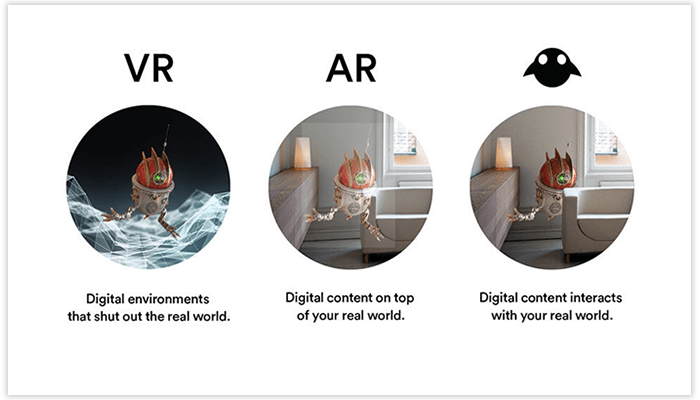 Let’s take one by one of all AR, VR, and MR. It will help you to understand each of these technologies in a better way.

What is Virtual Reality (VR)?

VR or Virtual Reality is a computer-simulated reality that employs headsets to induces pictures, sounds, and other physical sensations that helps in creating a virtual environment around the user. In simple words, Virtual Reality puts the user into a virtual world that he can sense, feel, and see.

A complete VR enables the user to experience all the five senses that are taste, sight, smell, touch, and sound. But don’t expect to go through the same experience of VR that you may have felt last time.

Every VR app or game is designed differently. Therefore, some VR experiences will make you see and feel the virtual environment, whereas, some can let you smell and taste. So, it all depends upon the type of VR you are integrated with. 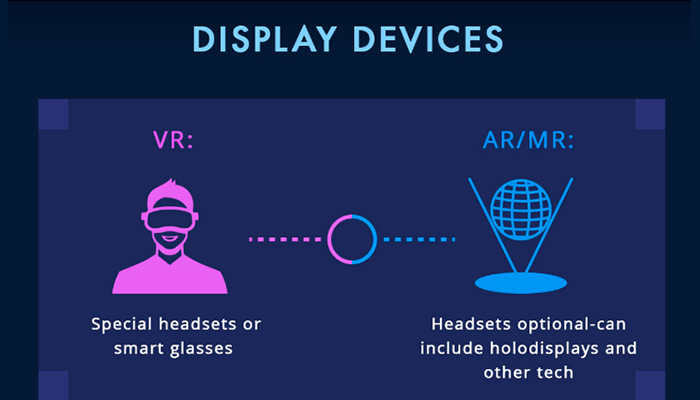 You can see a wide range of applications of Virtual Reality in the mobile industry. Ranging from gaming apps to utility ones, VR has made its mark almost everywhere. This excellent technology has way more chance to dominate the marketplace, and I am confident enough about the future of Virtual Reality.

What is Augmented Reality (AR)?

Augmented reality is different from Virtual reality. It makes us view the physical world directly or indirectly, where elements are supplemented by computer-generated inputs like sound, video, and graphics. It is more like living in a normal life where this technology blends the existing components with a device.

At present, smart devices like mobile phones have become the most sort of atter smart devices that can let us experience AR. It is done by bringing the device camera into action, and the digital content overlays the surrounding environment through an app.

Other than this, AR headsets are also used to make it happen. For instance, Snapchat’s new AR bitmojis and Pokemon Go are two primary examples. 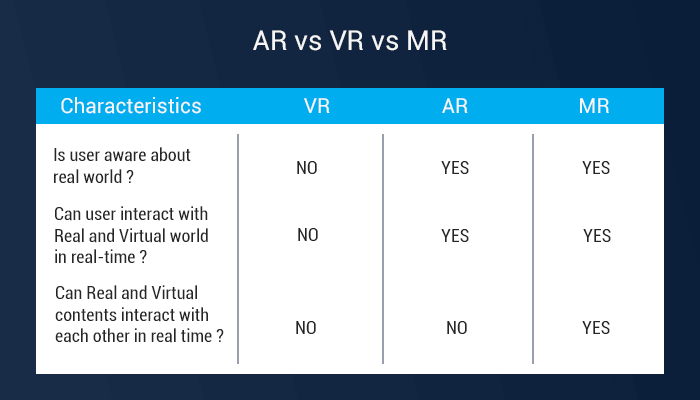 What is Mixed Reality (MR)?

Just by taking a look at the term MR or Mixed Reality (MR), one can easily make out that this technology is a mixture of something and when we have already discussed the AR and VR, you can relate them to MR. Yes, you might be thinking in the right direction. MR is a hybrid reality that merges the real and virtual worlds together. It brings the physical and digital objects into the same fray. 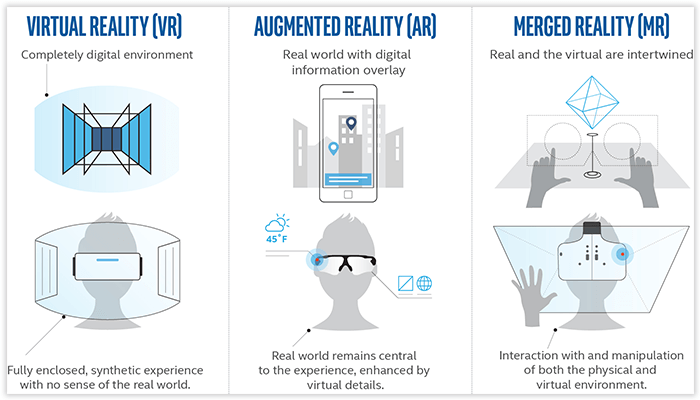 Apart from these three remarkable technologies, the next big thing is the XR or Extended Reality. EX is a new term that has made its way into the technological world, and that’s why it’s not much popular among the masses. It claims to have elements of the future, as it includes real-and-virtual combined environments, coupled with human-machine interactions generated by wearables and computer technology. 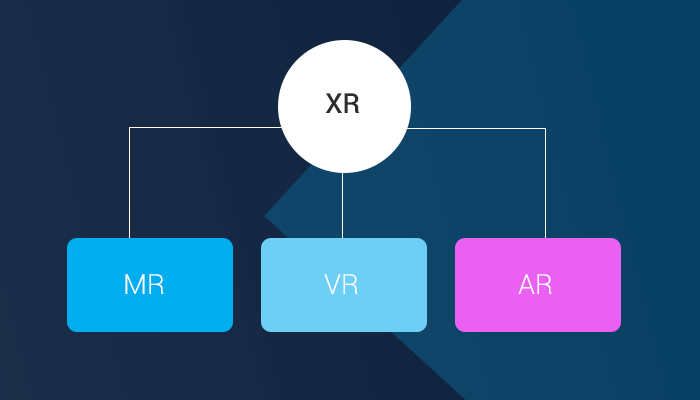 So, get ready to embrace this fantastic technology soon on your smart devices. Who knows, you might get a chance to experience it on the go as well.

To know more about these technologies, stay tuned to the regular and crisp updates of MobileAppDaily that bring you everything related to the mobile industry to your doorstep.

PREVIOUS How To Improve Your Mobile App Security in 2021? Here Is The Guide

NEXT Is App Preview Video Good For Your App?

How Technology Can Help You Manage Compliance Better

Whether your operations rely on machine learning, Big Data, or artificial intelligence (AI), it is critical to streamlining your information security monitoring efforts. Having a strong cybersecurity risk mitigation program that is built upon regulatory compliance will help to keep your organization