Know the reason why Startups choose Swift over Objective-C 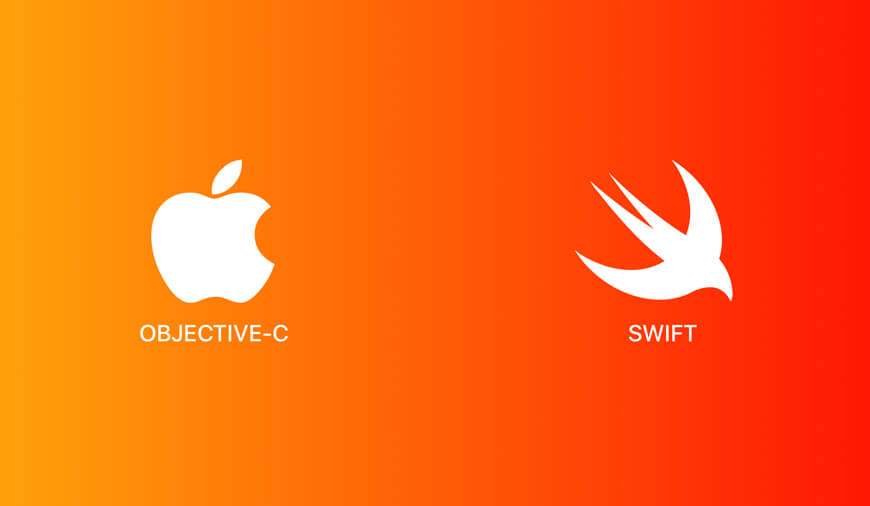 What is the first thing that you think about before starting a Web or Mobile App Development project?

Choosing the Programming Language for the project, right!

So, if you are someone who is going to start their own iOS development project soon and don't know which language to select for the procedure. Then, you have come to the right place...

Because in this article, we will be telling you the most important Top ten Reasons why you should pick Swift instead of Objective-C as your iOS project's language.

So, if you have questions in your mind like:

Don't worry, just keep on reading and all your questions will be answered in this article of Swift vs Objective-C: Comparison between iOS programming languages. 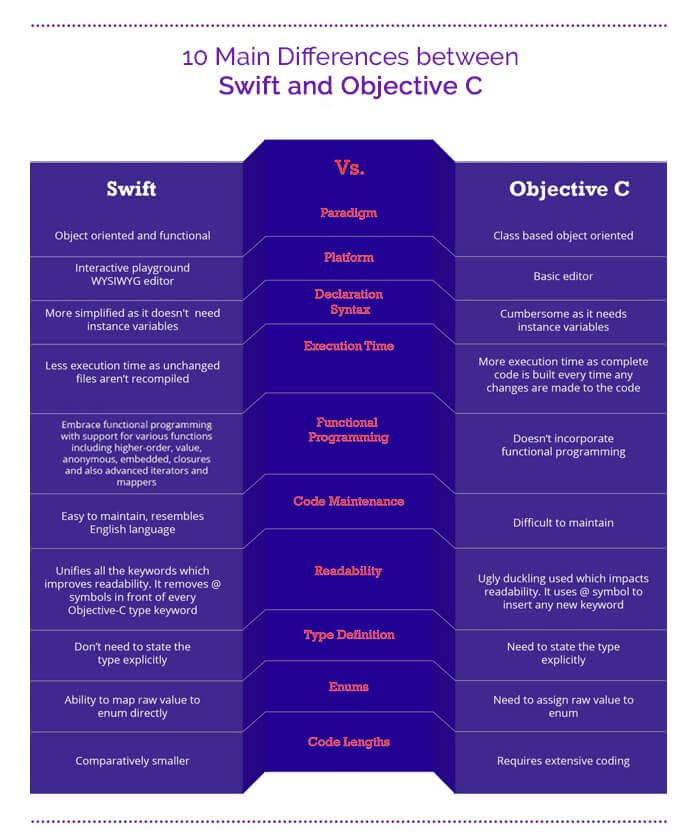 Back Story on Objective-C

The objective-C is a programming language that has been in the race for ages, it was developed in the early 80s by the Stepstone company. But in the year 1988, it was made public with the release of a book known as 'Object-Oriented Programming: An Evolutionary Approach' by Tom Love and Brad Cox.

Objective-C's object syntax is derived from the Smalltalk language, whereas the non-object-oriented operations of the objective C has taken from the programming language C.

This language is known to use the message passing with dynamic typing which also requires dividing of its classes. These two class division code blocks are known as 'Implementation' and 'Interface'.

By the beginning of the 1990s, the objective C was licensed by the NeXT Computer Inc. for the purpose of developing the NeXT frameworks. But eventually it was acquired by the tech giant Apple and that's when it became a great option for the iOS development.

Back Story on Swift

In the year of 2014, Swift programming language was launched by the company, Apple as a new and better alternative for Objective-C for mobile and web development. Till that time, objective-C was the one on which the core development of iOS took place.

In comparison, Swift is a newbie language that became open source just one year after its public release. What makes swift entirely different is its heritage that doesn't involve anything from C or Smalltalk languages.

Swift was designed in such a way that it can be compatible with all the existing iOS development tools including the Cocoa Framework and xCode.

But Objective-C, the object-oriented superset derived from the programming language 'C' was quickly replaced by Swift all because of its ease of use and a wide range of advanced features. Some of Swift's advanced features were the Higher Order functions, Type Inference, Generics and many more.

Now, let's have a look at the top 10 reasons why Swift should be used for your next iOS development project instead of Objective-C:

We know that in Objective-C if you used a wrong string token, your entire app can end up crashing whereas in Swift the coding portion is way lesser as it adopts the modern programming language functions.

As swift supports combining strings and characters by using the operator '+' instead of using repetitive statements. This results in reduced complexity of coding statements in swift.

For example, in objective C there are some special string tokens that need to be learned by the programmers but as swift provides the feature of string interpolation. This need for memorizing tokens is eliminated.

If a value is returned from a method in objective C then it will be the responsibility of the developer to look out for the behavior of the pointer variable that is returned. While in swift, these value types make it entirely clear in the method definition itself that if a value exists or if it has any potential to be optional.

For providing this predictable behavior, swift often triggers a runtime crash in case of a nil optional variable being involved. This crash further provided consistent behavior as it forces the programmer to fix the error as soon as possible.

Here, the Swift runtime crash will stop on the exact coding line where the nil optional variable is used. With this technique, swift tries to completely avoid the bug or else fix the bug sooner in comparison to Objective-C.

When Swift was released as a modern programming language that dropped the legacy that was being followed by the objective C. Unlike in Objective-C, now you don't need to use parentheses to cover expressions in if/else situations or use semicolons at the end of each line of code.

After all these extra obligations were removed from the language, the Function and Method calls that are used in swift follow the industry standard comma-separated parameters within parenthesis. The output with these standards is much more simplified in terms of syntax and grammar which makes it more readable.

As mentioned above, the programming language C plays a significant role in objective C whereas swift did not evolve from the basics of C language. That's why with swift there is no requirements for the two files of Xcode and LLVM compiler as they can automatically perform incremental builds in swift.

What happened is Swift is that the file of objective C header (.h) is combined with the implementation file (.m) to create a single code file known as (.swift). So, the LLMV compiler and xCode works independently so that it can reduce the task of maintaining the swift code.

Swift offers a great unified memory management to the developer which was never provided by Objective-C before. Although, objective C supports ARC i.e. Automatic Reference Counting with the help of object-oriented code and Cocoa APIs. But it was not available for other APIs like Core Graphics.

In order, to solve this issue in objective C it was the developer's responsibility to handle the memory management while working with core graphics which sometimes lead to several memory leaks.

This was not the case with Swift as the ARC in swift works effectively with both object-oriented as well as procedural code. With this, the issue of automatic memory management has been solved so that productivity of the code can be increased.

Since the Swift Playgrounds came into the picture, the programmers were eager to try and test it out themselves. The Playgrounds basically enable the developers to test out a new graphics routine or even a new algorithm. The best part about the Playgrounds is that the programmer doesn't need to create a completely new iOS application just for the purpose of trying out 5-20 lines of code.

As per our experience, we would recommend like to say that the Swift Playgrounds can be an excellent tool for experienced iOS developers rather than the newbie or beginner programmers.

Looking at the past few of the Apple's conferences and software releases, it is confirmed that Apple has some big plans for it's Swift programming language.

Also, we need to keep in mind the fact that swift has been around for just a couple of years and has shown a tremendous evolution over this period of time. So, in the upcoming future, we are likely to see a lot of upgrades of swift in iOS development.

When the Static Libraries were updated to the Dynamic Libraries, it was a major change that was supported by versions including iOS 7 and iOS 8.

Swift offers the user implicit namespaces that allow same code files to exist across various other projects without causing a Build Failure crash. In Objective-C, this feature was not available due to which the programmers have to do bookkeeping to avoid confusion in namespaces.

As namespaces are based on the target where a particular code file resides, making it easier for the developers to differentiate classes and values by using a namespace identifier. This facility works efficiently with open source frameworks and libraries in swift code.

The use of higher-order functions and generics has made the swift programming language reusable, clean and easy to understand. This has further contributed to making the core iOS development faster in swift in comparison with objective C.

Swift is as fast as C++ and with the release of the newer versions of the xCode, swift has become even faster.

These are the main factors which throw light on the key differences between - Swift vs Objective-C. So, know you which programming language to use for your next big iOS app development project.

NEXT Learn How To Add In-App Purchases In iOS: IAP With Swift Tutorial [2021]

Did you know that application development never stops, even after being submitted to the curtain? Creating and uploading applications to leave after that is not recommended. We must continue to work to improve it, and that is in all its aspects.Even if you prepare well before starting developmen

7 Effective Ways To Maximize Your App Development Budget in 2021

Budget is the foremost requirement for any operation and app development is no different. With the rapid advancement in the app industry and the advancement of technology, the app budget around the world is increasing and people are investing more and more in their app development projects. To devel