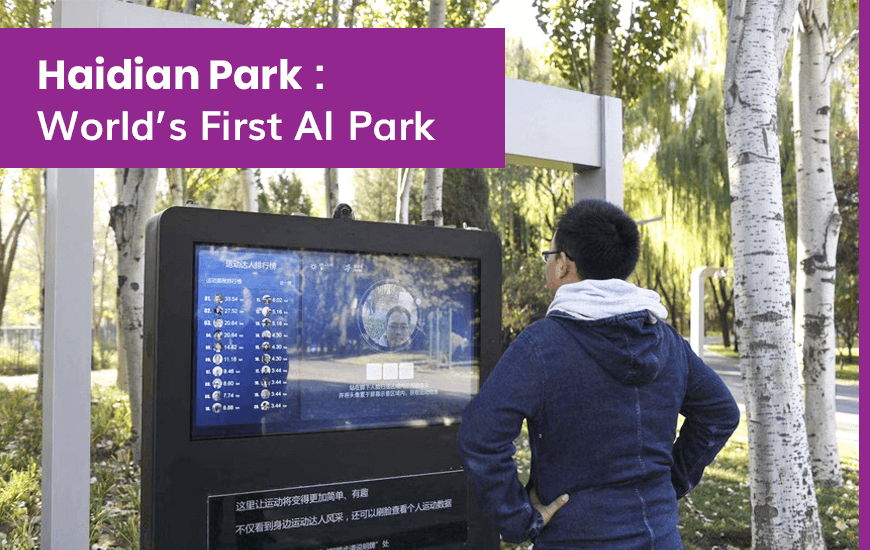 Since the past couple of days, Haidian Park has been in the headlines for being the world's first AI park. It all started a year back when news about Beijing planning to develop an artificial intelligence park first caught the wind. According to several news agencies, it was reported as a step to push China as a nation forward in order to fulfill the ambition of becoming a world leader in Artificial Intelligence by the year 2025.

This newly opened AI-focused park in Beijing features artificial technology’s different applications which include driverless buses, augmented reality (AR) Tai Chi, smart walkways and much more, which we will be discussing below in detail.

In addition to the world's first AI park news, there's another accomplishment for the Chinese media agency as the world's first AI news anchor. This is considered to be an English Artificial Intelligence (AI) Anchor that has which is also claimed to be the first of its kind by Xinhua News Agency.

The entire project of this AI-focused park in Beijing is said to be an estimated 3.8 billion yuan, which is equivalent to $2.12 billion. The Haidian Park AI-Park was co-built by the Haidian District and the Baidu Company, the organization behind China's giant search engine, in correlation to a long-term plan to create an entire smart city. The Beijing park with AI technologies underwent a ten-month long renovation and was selected for the pilot program.

Apart from the fact that Haidian district is home to many of China’s biggest tech companies, it is also considered as 'China’s Silicon Valley' there are many key points that you should know about the world's first AI-focused park in Beijing: 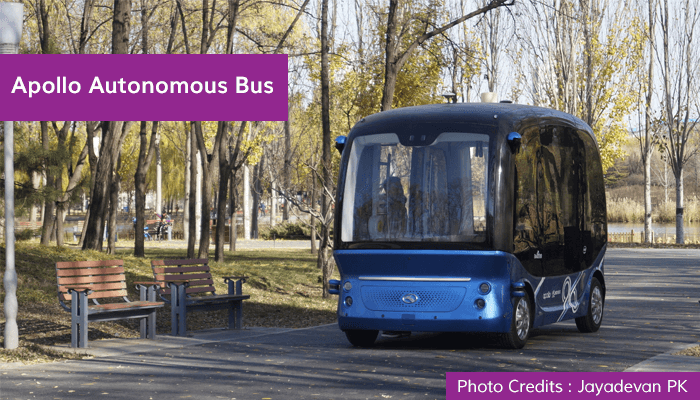 Apollo autonomous driving is one of the most talked about applications of AI technology and its trends, which is the latest tech installation and also the main attraction of this A.I. park. Apollo was developed by Baidu, where passengers are allowed to get a free ride, which just adds a plus point to it.

Baidu is well-known as China’s largest search engine company and is also one of the three companies that the Chinese government has appointed as a national leader of AI technologies, the other two are Alibaba and Tencent. Once the government in China precepts, things get done very quickly and this is exactly how Haidan Park became the 'world’s first' AI-park in just a few months. 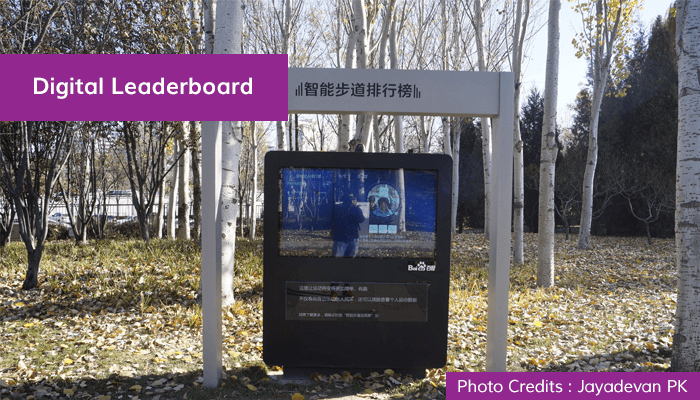 As soon as you will enter the world's first artificial intelligence park, you will surely notice a big digital leaderboard which is also a tech installation in the park. It can also be referred to as a part of the 'intelligent' jogging track that actually runs along the whole park.

To be on that digital leaderboard all you need to do is stand right in front of the board, get your picture clicked by the camera installed there and then sync your smartphone before running on the track. 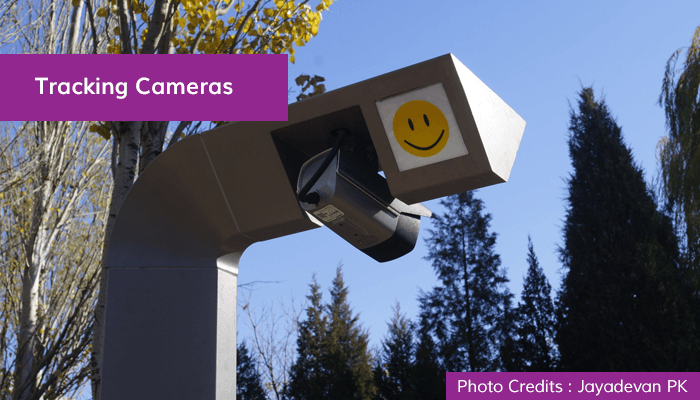 Over the entire park, you will notice there are cameras which are meant to track your progress throughout your run. In simple words, cameras will scan your complete run and record those details. This stored information about the users' run will consist of all details till the end of the lap and if a user does well then the information will be shown on the leaderboard.

If you are someone who is not interested in running the whole lap then you have the option to take a ride on the Apollo autonomous bus which has the capacity to carry eight people at a time. Although Apollo's autonomous driving is currently limited to the AI park but by the year 2019, Baidu wants it to run in city roads that are tagged as ‘geo-fenced'. And by the end of 2021, the company aims to run Apollo buses on all highways and city roads in China. 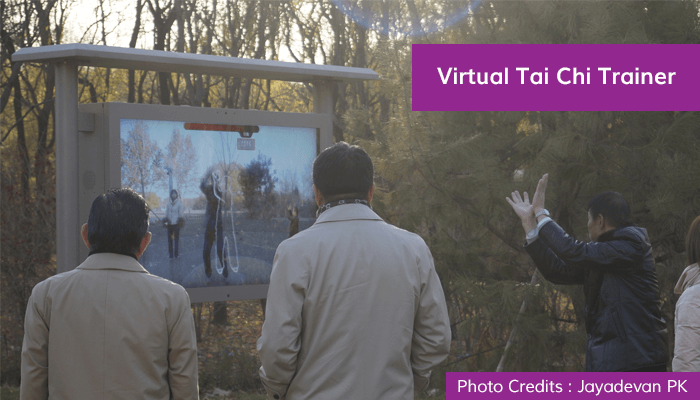 At present, Baidu has more than 100 partners which include companies like Bosch, BMW, Daimler, Ford, Honda, Microsoft, Nvidia and many more. In order to get started, they first have to set funds for startup investments for this huge autonomous driving project.

Apart from all the other innovative artificial intelligence applications, there's something known as a virtual Tai Chi trainer. Basically, it is a huge screen that is equipped with an advanced camera and high-tech motion sensors to track every movement of the people standing in front of the screen. Here, you are supposed to stand in front of the screen and follow Shifu’s prompt that means if you follow the Shifu routine or Tai Chi lessons accurately you will get more points for it. 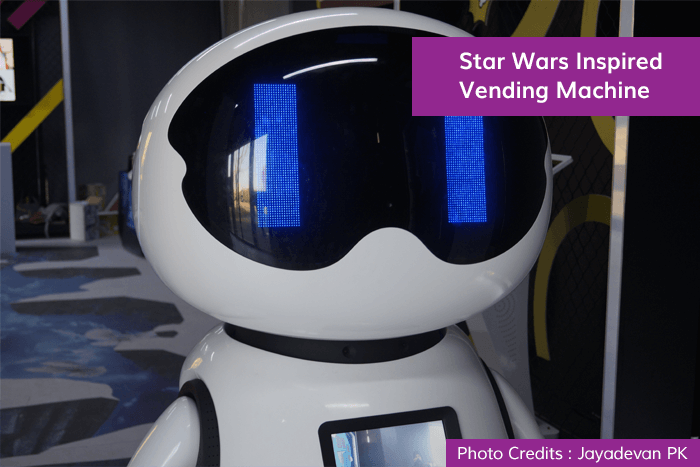 Now that you are done with your Tai Chi lessons, the next is the stop is the vending machine which is an automat that runs on the face recognition system. On moving inside the facility, you will see some virtual reality gear along with a walking and talking robot which somewhat looks similar to the R2D2 from the Star Wars franchise. This robot is also responsible for tracking each and every move of the user in the facility.

This Beijing park with AI technologies has now become a topic of interest all around the world and is giving birth to a number of discussions about the capabilities of artificial intelligence.

The world's first AI-park is located in north-west of Beijing’s Haidian District, this park features an augmented reality (AR) Tai Chi lessons, an autonomous shuttle for Apollo bus, smart walkways that track people’s steps using facial recognition and smart lamp posts that can record exercise data for each user with intelligent pavilions equipped with Baidu’s conversational DuerOS AI assistant, so what is there more to ask?

We hope to see more such innovations in the field of artificial intelligence and if you want to keep yourself updated with such interesting technologies then make sure to click on that 'Subscribe' button to never miss another notification from MobileAppDaily.