Here is What Makes You a Pro-Swift Developer in 2022

Being the official programming language of Apple, Swift proves to be the right programming tool for iOS developers. 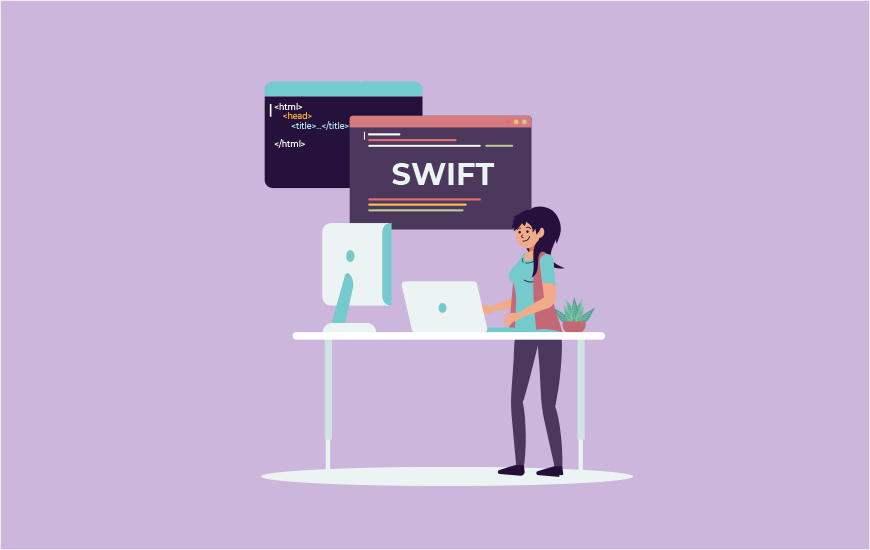 Are you planning to delve into the silkiest slice of the development cheesecake?

Looking for the hottest piece of tech right now?

Then, your decision to click on this blog is a sign from the cosmos that you are on the right path.

Mobile app development has become the most significant sector indisputably for the last few years, and it only seems to grow exponentially. There are millions of job opportunities in this field for every level of skill and every location possible on the planet.

Companies are continually looking for new talent in the levels of programming- interns and experts, juniors and seniors, everyone is welcome.

Just like we welcomed Apple into our lives and let it immerses us in a whole new world, Apple is now giving programmers a chance to create their universe of creativity and functionality. Yes, you guessed, right!

This article is about Swift- a multi-paradigm, general-purpose programming language for Apple. The language was created to support safer core concepts in association with dynamic dispatch and extensible programming. It was intended to catch bugs address some of the common errors of programming like null pointers.

In simpler terms, sans jargon, Swift is an intuitively powerful programming language for iOS, macOS, and watchOS and far beyond. The writing of this code is not only fun but also highly interactive. Also, the syntax is expressive and concise.

Swift includes safety in design and produces optimal speeds that iOS developers love. Pardon the hyperbole here. The sheer magnanimity of the subject makes us want to wax poetic about it.

This blog is for everyone with an interest in mobile app development. Whether you are a seasoned expert or newbie thinking of switching to Swift, we have something for everyone. This is a step-by-step guide about becoming a pro at Swift.

It is common knowledge that when one aims to develop for iOS, they need a Mac. Although the market offers alternatives like Mac In Cloud and Hackintosh, as an iOS developer, it’s better to start with a genuine Mac since it is going to be your primary workspace- call it your study table at college if you want to!

2- Get your hands on Xcode

Now that you have your Mac on the table, it’s time to install the quintessential tool - Xcode. This is the Integrated Development Environment (IDE) needed for developing iOS applications.  It's free and readily available on the App Store.

Xcode would let you write, edit, and debug your app in its storyboard. It enables you to draw the app and also unit test it. Familiarity with Xcode is significant for all iOS developers- especially Swift users.

The hardest step after setting up your Mac is learning code. If you have a background in programming, then you have two options to pick from: Objective-C or Swift.

Both of these languages are standard and objective-driven. Swift is recommended for its brevity and flexibility. Swift developers have the opportunity to fully immerse themselves in the world of pointer, classes, loops, and data types without worrying about any accidental losses caused by a breach of security.

Once you have all the basics down pat, it is time for you to start making apps from step-by-step tutorials. The sites, AppCoda, and Ray Wenderlich are two brilliant resources. The former helps beginners get used to development, while the latter has a gigantic database of tutorials.

You can move along and start with calculator apps, weather apps, and even currency converters if you will.

After developing an affinity with code, and a deep-rooted understanding of the process, you can now start designing your custom app. You do not necessarily have to create the next Amazon or eBay.

All you need to do is stay calm and study hard about the current niches in the market that you can work in. Start with something that you are comfortable with and then conquer challenges.

If you have studied UIKit the most, then you are more likely to create something with a comfortably sophisticated user interface. Moreover, the list goes on…
In the meantime, you can keep learning about software development in general. It’s not necessary for you to go to university for a couple of years to study computer science. Make Google your best friend, and start learning code at home.

After completing your research on ideas, writing, and editing: you should have a working app. It does not matter that you spent a few days on the task, a few weeks, months, or even years.

The bottom of the story is that this app is your resume. It needs to be the best representation of your potential, hopes, and dreams.

If you are confused about what precisely your employer would look for, in your app, then here is a list to help you:

However, everything depends on the company and the job that you are starting. Generally, the must-have developers skills listed above are enough for you to start as a junior iOS developer position.

Now that you have a shiny, new app at your disposal, it’s time to publish it at the App Store. This is entirely optional though. You would need an iOS developer account which costs $99 annually.

So there is still a chance your app not to break even this cost. A vast majority of companies evaluate this as a plus point in your resume.
The presence of your app in the App Store translates that you are familiar with the process of publishing. It entails your familiarity with Apple’s restrictions about apps (Remember, Apple has A LOT of them). You are required to publish keywords, screenshots, promo videos, and descriptions.

GitHub is a supportive social platform, mostly used for sharing code. It allows you to upload the code of your app (publicly or privately that's up to you).

You can watch systems by your peers and contribute to a lot of open-source projects. The platform is widely used, and benefits solo developers a lot more than your expectations.

Uploading your code here would help you organize it, while also work as a reliable backup. Did you know that your potential employers can also view your code from GitHub? Now that’s a millennial discovery you would not want to miss out on!

Many people wish to start programming but let their vision go due to common misconceptions. However, if you are trying to learn something new and actively want to develop for iOS, then Swift is your Rosetta Stone.

The iPhone in itself is a fantastic expensive gadget that encapsulates the entire world into the palm of your hand. Millions of people have these, and their demands for customized mobile apps is growing by leaps and bounds.Developing for this target audience is a challenge, and the chance to create in the Apple development environment is a luxury.

Apple has worked every year to ensure that the advancement of its tools is proportional to easier access for developers too. Their initiative of creating an easy to learn, the programming language has created a legacy that is hard to repeat.

We sincerely hope that this post has given you the insight about how to initiate your learning and become a pro at Swift and a happy iOS developer in general. Remember that a little perseverance and much passion can help you reach your goals.

That’s all from us, for now. Get coding, and good luck!

PREVIOUS Top Reasons: Why Your App Could Be Rejected By Apple App Store?

NEXT Must Have Skills to Manage Remote App Developers in 2021

Hybrid or Native: Which Should You Prefer For Your Enterprise in 2021?

Nowadays Startups are highly dependent upon the mobile application for their success. For any business in its initial state, it is almost inevitable to skip the involvement of mobile app strategy in marketing plans.In fact, the significance of mobile apps for e-commerce and other marketing purpo

How To Evaluate Mobile App Development Companies For Your Project

Mobile app development has quickly become a household term ever since the mobile industry flourished into the booming giant it’s now become. With the success stories that abound in the media regarding the lucrative potential of apps, you can only expect many other business owners, companies, a

‘Agile Methodology’ - one of those buzzwords that has been in the limelight for quite a few years now. From mobile app developers to testers to professionals with a technical background, they are well of how important the agile practices can be. This is one of the main reasons why we dec

With such a horse race going between app developers to build something unique, the number of apps is boosting drastically. The main issue in the current app market is, there might be a 90% probability that the idea you have in your mind already exists. On top of that, if there’s a unique possi