Android application architecture patterns are a primary concern for developers. Find which pattern works the best for your needs. 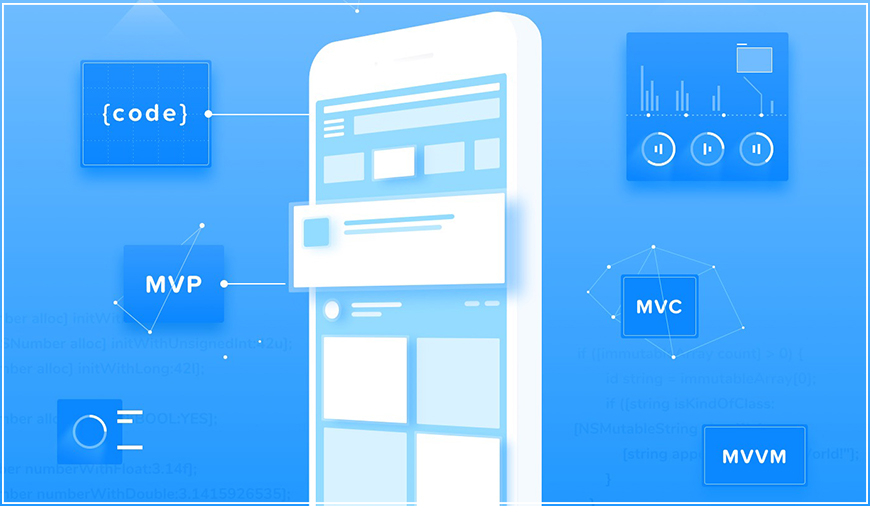 Recent trends have shown that a majority of app developers used to favor the MVC structure for the development of mobile applications, as it was the most straightforward architecture to use. But now, times have changed; the simplicity of the process is no more the priority in software development, it's more about the functionality and features.

Today, in this article, our primary focus will be specifically on the Android Application Architecture and on finding out the main difference between the popular architecture of apps on Android MVVM vs MVP. For Android, the two architectures that are highly recommended to use are MVP and MVVM against the Clean Android architecture components and MVC, which were popular in the past.

As an Android developer, what would be some of the initial questions that will come to your mind regarding application development? One or more of them surely would be regarding Android architecture, like:

MVVM vs MVP - Most Suitable Architectures

When choosing, the app developer has to make sure that the Android architecture components of their choice make their product more scalable and easier to maintain effectively. The developers primarily use architectures like MVP and MVVM in Android as an approach to organizing the apps into more logical components.

The MVVM and MVP are no doubt the most adopted architectures for android application development, whereas the MVC (Model View Controller) is the one that was a great option in the past few years.

Let's get to the bottom of this by analyzing the difference between MVC and MVVM Android architectures and then finding out which one is the best architecture to move ahead with your Android development. 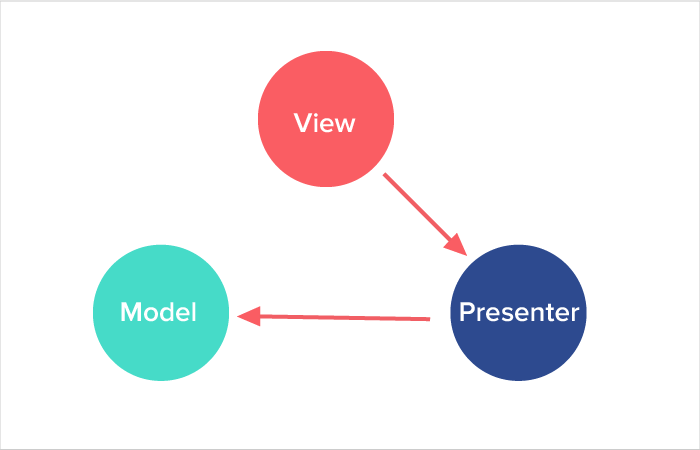 The first layer is the Model that contains the data; we can say that the model is the only gateway to the business logic as they merely store the data. These models are treated as objects because they also consist of properties, including details like Name, Type, Date, and many more.

The division of the Presenter layer is responsible for allowing the substitution of the coding parts, connecting layers as interfaces, and also the proper testing.

The third and the last layer is the View layer whose responsibility is to provide the visual display of the mobile apps in sync with the data and information that is provided as input by the user. The critical function of the View layer is first to detect the input, if any, and then proceed with visualization based on actions like swipe, tap, touch, etc. 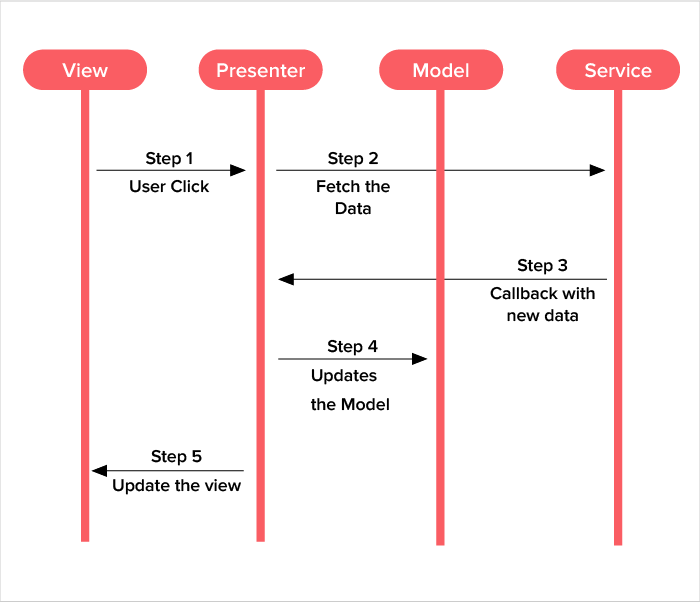 The View layer  takes care of the UI component, which further controls the viewing properties and is responsible for displaying the data on the screen. 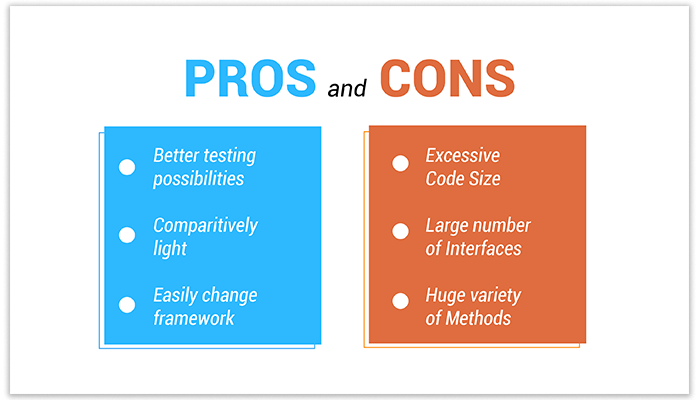 MVVM architecture is also known as the Model-View-View-Model pattern that first came into light when the library of Data Binding was introduced. The MVVM pattern was quickly adopted for various environments, including JavaScript, Silverlight, etc. 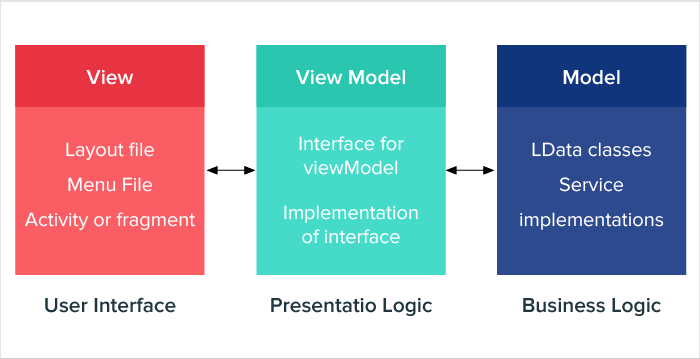 The MVVM allows the Android app developers to use the concept of Data Binding with a reduced code that also provides a significant advantage in data connection.

The model layer of MVVM is similar to the model layer of the MVP architecture as this layer also consists of data that acts as a gateway to the business logic. The model is also known to comprise data along with the tools of data processing. Some even refer to this layer as the brain of the application.The model layer is not tied directly to the view layer which also makes the models reusable in various other contexts.

The View layer, which is responsible for the function of data visualization in the MVVM architecture, ties to multiple variables as well as actions in a flexible way. This layer also transmits the values into the ViewModel, and this contributes to changing the UI view.

As we already know that the View layer is known to handle the User Interface (UI) component, which means it takes control of view properties and performs actions like showing message delivery (Error & Successful), initiating activities, and much more.

The final layer is that of the ViewModel (MVVM), which wraps up the model layer and prepares for the observable data; it also consists of all the information that is required to display the view. Also, multiple views can effectively share a single ViewModel, which helps in using the same functionality for an entirely different layout.

The ViewModel also offers many hooks for the View layer to pass on the events to the model layer, i.e., the transition of ViewModel automatically turns the View. 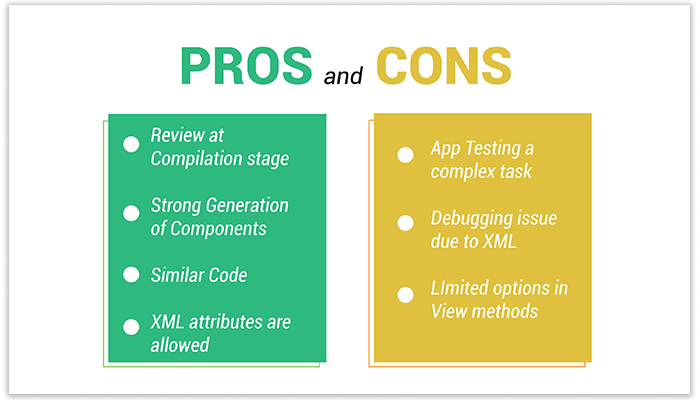 Below is the comparison between the MVP and the MVVM architectures based on the features like:

Conclusion: MVP or MVVM for Android

What we observed by analyzing the current trends is that most developers favor MVVM over the MVP model because in the MVVM pattern the separation is possible between the View layer and the ViewModel that means a separation can exist between the User Interface (UI) and the logical code, respectively.

The app developers can also write their UI tests by using Espresso, which is highly preferred by developers. But the best part about MVVM that makes it a more attractive option than MVP is that it provides ease of maintenance to the user by allowing them to make changes to the codebase efficiently.

So, that was our shot in comparison of two of the most popular android app development architectures, i.e., MVVM vs MVP models. Hopefully, you liked the insights on the main difference between the MVP vs MVVM Android architecture model and got the help to find which Android framework architecture suits your needs. For further details on various tech-products, the latest updates of the market trends, best apps launches, and best android application development company, stay tuned with MobileAppDaily.

NEXT Is Tinder Behind the 'Dating Apocalypse?'

7 Effective Ways To Maximize Your App Development Budget in 2021

Budget is the foremost requirement for any operation and app development is no different. With the rapid advancement in the app industry and the advancement of technology, the app budget around the world is increasing and people are investing more and more in their app development projects. To devel

Behavior-driven development (BDD) centers around fulfilling users’ needs and give them an ultimate user experience. Every time a user interacts with an app, system, or any kind of software, he/she wishes to get relevant insights by exploring it. All a user wants is a well-designed and