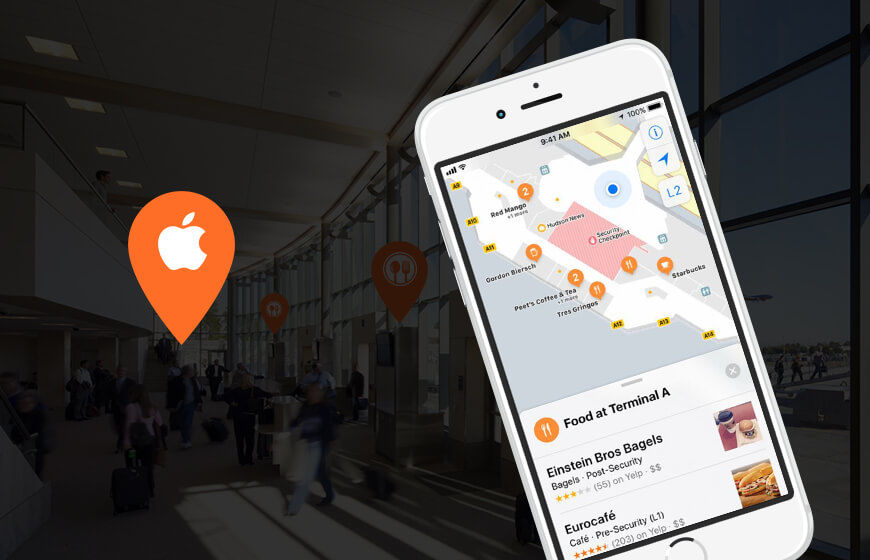 Apple Maps is becoming more useful especially for frequent travelers with the addition of indoor maps of 30 Airports. The company was working for the update for quite some time and finally released it for the users. The feature will help the users to navigate their way inside the airports listed among the Apple Maps. Apple Maps now supports some of the biggest American airports such as Los Angeles International airport, London’s Heathrow, as well as New York’s John F. Kennedy and LaGuardia.  Some of the key airports outside the US are Hong Kong International, Amsterdam, Geneva, two in London and Berlin.

Once you open the Apple Maps and nearby the listed airport you will see the ‘Look Inside’ option on the map. Tap on the option and the inside grid view of the airport or terminal will pop up on your screen. The entry gates will be denoted by a yellow color on the map along with other populated destinations such as check-ins, baggage counter, and airport lounges. The map also shows other spots such as restaurants and restrooms for the users to get information easily. By tapping on the spot on the map the detail about the place such as Terminal, floor number, the phone number will be available. The map will also show you the reviews and feedback about the places from third-party review platform such as Yelp.

Users can also get the 3D view of the space by swiping up the screen with two fingers on the map. Tapping on the numbers available on the upper right corner of the screen will let you switch between the terminals. The implementation of the feature to give an inside view of the airports took great efforts from Apple. The company worked with the airport team and the authorities of the respective airports to get the detail of every layout of the space. The map is also integrated with Siri assistance and let you ask Siri to take you to any point inside the airport.

The update is really a great help for the travelers as they don't need wonder on the airport to find the luggage center, restroom or any place offering better quality food. The best part of the addition is that it is flawlessly accurate with the location. For an instance, the feature works well and will guide you efficiently throughout the terminals. Maybe in future, the iPhone maker will add some of the additional data, including the flight times and information such as the gate number by which a flight is leaving. In case you are wondering about the airports that Apple Maps supports now check out the name of all 30 airports here.

NEXT Blockchain Technology: From Bitcoin To Crypto-Wallet Know It All

The PC chipset maker revealed two new highlights intended to enhance the effectiveness of PCs running security programs that identify and cut-down hacking programs. Intel laid out the features toward the beginning of the RSA Conference, one of the biggest yearly cybersecurity events.“Spect