Learn, test, analyze, and revize: all on your smartphone

We’ve all studied books, haven’t we? Whether in school, college or in any sort of educational environment. But like every other domain today, the learning sector is changing too.

Sitting and learning in a class full of students can sometimes lead you to not understand every concept and repeatedly asking about it to your teachers is just not a feasible option, but with the advent of smart classes, learning new concepts are becoming easy and helping students in retaining their memory for a prolonged period of time.

If you've been wondering how you’d proceed with your learning this 2020 in a smart and innovative method, We have an app for you that might be an answer to all your questions regarding learning. And we are talking about  BYJU’s, India’s learning app.

With the advent of various educational and learning applications that help you gain a better knowledge of your subject, BYJU’s learning app provides one such platform that offers students of class 4-12 an experience of the digital learning process in maths and science. Not just that, the app offers to educate you about multiple entrance exams in an interactive way.

So in case, you’re pondering whether the app’s worth using, here’s our precise review of the BYJU’s learning app: 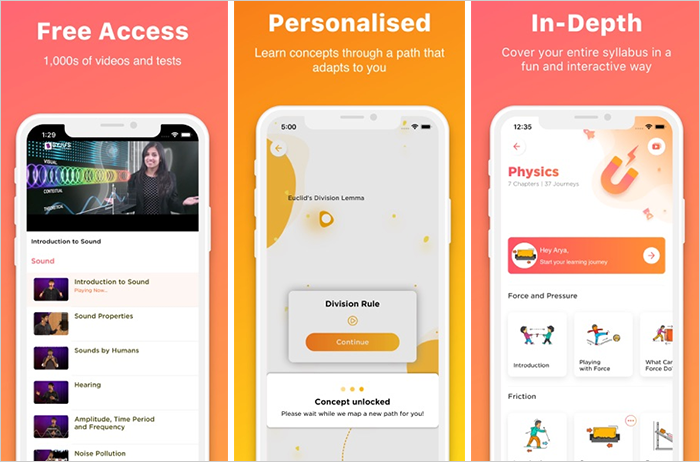 Set up in India and functioning around the world, BYJU’s app is used by over 15 million students from around the world. The app offers multiple learning platforms for competitive exams like CAT, GRE, GMAT, NEET & JEE and even IAS.

BYJU’s has skilled and professional teachers holding knowledge in their respected domain who teaches maths and science subjects to students for class 4th to 12th. And it’s no surprise that the app has been downloaded by millions of users since its origin in 2015.

Here are few of the engrossing facts revolving around the app:

Unlike the youtube channels where information is scattered and is not easy to find relatable content on a particular place sometimes, BYJU’s learning app provides a platform to quench your learning thirst by setting up a team of high professionals for imparting quality knowledge.

In order to excel in the market, features contribute a lot and can make or break the application’s back. Hence, we’ve rounded up some of the notable features which make BYJU’s an app worth a try:

BYJU’s have another application that is specifically for students of class 1-3. The app is called BYJU’s early learning app and is an example of the wide offerings from this learning app.

Learning can take you places and BYJU’s promotes learning in the easiest way possible, catering to every sphere of learning, the app has been able to successfully produce videos of every lesson to promote audiovisual learning.

Learning digitally is trending, and there are not many learning apps that offer as good services and features as BYJU’s. With BYJU’s learning is as per your convenience and you can visit a particular segment as many times as you want in order to understand better. With a huge fanbase, the app is definitely worth a go.

How to Use BYJU’s App?

Using this multifaceted learning app is simple. Here are the steps you need to follow:

The simple installation of this application is very hassle-free, which lets you focus on your studies in a sincere way.

How Much Does BYJU’s The Learning App Costs?

BYJU’s application has a pricing plan depending on what you choose to study. Users can register for free while buying books and other study materials for diverse prices. Ideally, BYJU’s learning kit of competitive exams is usually paid with a fair price range, while the same goes for BYJU class fees for students looking to attain the maximum out of the app.

Today there are many educational apps and websites for you to use. But only a few apps stand out from the rest. While every app inhibits unique features, BYJU's learning app isn’t behind. In fact, the app holds millions of users and that in itself speaks about the accountability of the app.

So it’s no surprise that the app stands as the top educational platform today by producing learning in a unique and thorough way. The app works fine and is highly interactive which makes it accessible while making your learning and retaining process superior through visiting every lesson as many times as you want. These innovative features are something that is assisting BYJU’s learning app climb ladders in the market.

Multiple learning options, interactive videos, and numerous choices make the app as one of the highly facile apps to use.

If you like this descriptive app review and want to know about other innovative mobile applications check out the mobile app review segment featuring top Android and iOS apps. For any suggestions, leave your comments below and experts at MobileAppDaily will get back to you at the earliest.