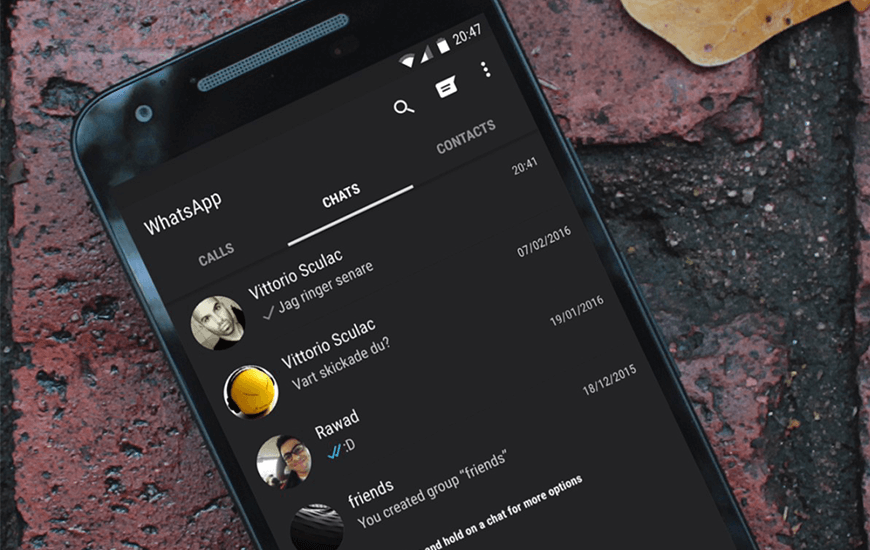 The dark mode seems to be getting on priority for social media platforms. Recently, YouTube and Twitter came up with its dark mode for Android and the reports of a similar feature coming on WhatsApp is making rounds in the market.

According to some rumors, WhatsApp is working on dark mode, which will be released either on Android or on iOS. The chances of dark mode for both the platforms can’t be ruled out in the near future.

I’m happy to exclusively give the good news: WhatsApp is finally working on a Dark Mode! It’s a dream ????
There are many important secret references in recent updates!

Be patient to see it out, hoping it will be FULL OLED friendly for Android phones, iPhone X and newer!

If the report turns out to be true, then the introduction of dark mode for WhatsApp will surely be appreciated by the users. The dark mode comes handy at night or in low-light conditions and helps in reducing the strain on user's eyes. Also, it helps in saving the battery usage while using the app.

The 'WABetaInfo' Twitter account is known for losing the rumors and news about the WhatsApp APKs. In yet another tweet, an expected version of the new WhatsApp mode is flashed.

FULL OLED FRIENDLY: see this WhatsApp screenshot (NOTE: IT'S MY CONCEPT! IT'S NOT THE OFFICIAL DARK MODE!!!!)

What do you like to see in WhatsApp? pic.twitter.com/8bf8NCV6db

However, the exact time of roll out of dark mode feature on WhatsApp is not yet known, but I anticipate to see the feature soon. Apart from this, WhatsApp is also working on another feature, which will let the users quickly reply to a message using a swipe right gesture in the Android WhatsApp app.

The swipe to reply gesture feature is confirmed by the online publication and will be released via server-side update.

PREVIOUS How to Name Your First App [Full Guide 2020]