How WillowTree became the go-to app development company for Google, Apple and Microsoft? 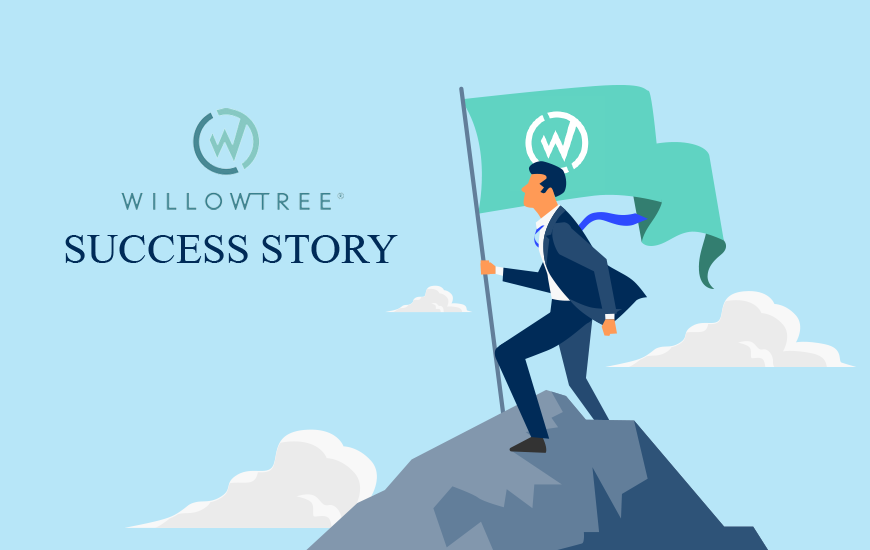 Over the decade, WillowTree has gone from developing apps for car parking to being the chief app development company for Regal Cinemas, the largest movie theater chain in the U.S. What started as a three-member company, now has over 300 full-time team members developing award-winning apps like the Natgeo App and is a Pledge 1% member, contributing its expertise and resources to non profits and charities.

It all started with a boy named Michael Prichard who began coding software while he was still in middle school. Fast forward to 2007, Prichard and his wife Monica start WillowTree as a general consulting business. But the same year the iconic iPhone was released and WillowTree’s fate changed with it.

At the time, Apple offered support for only Web Apps, but when in March 2008, Apple released a Software Development Kit for developers to build device run mobile apps, the Prichards knew an interesting opportunity was knocking at their door.

By July, Apple has also announced the launch of the App Store, so to cash in on the golden goose, Michael started buying Google Ads and hiring friends as contractors.

By 2009, the demand for iOS apps was through the roof, generating over one-third of WillowTree’s business from apps. The same year, Tobias Dengel, a business expert in sales and marketing, bought into the company and became its chief executive officer. The rest, as they say, is history.

Today, WillowTree has developed over 500 mobile apps, holds confidential engagements with Marquee brands such as TimeWarner, Pepsico, Nestle, etc., and since 2011, year after year, WillowTree has bagged several awards. Some of them being Webby Awards, Inc500, Communicator Awards, Glassdoor, W3 Awards, Appy Awards, American Business Award, among others. 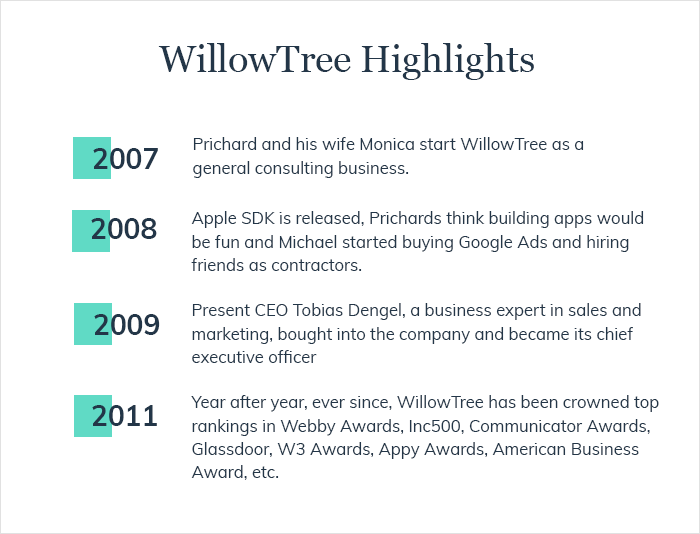 What makes willowTree better than the rest of the companies in the market?

Inspired by the ductile WillowTree, the company carries personal growth, adaptability, and comforting space as its core attributes for both their team members and clients. Naturally, it comes as no surprise that WillowTree has the highest team satisfaction in the industry, bags the independent analyst recognition and has developed over 500 mobile apps along with websites, IoT products, and bots for clients that keep coming back.

Recognized as a Strong Performer in B2C Mobile Services by Forrester, WillowTree is one of only five mobile agencies to bag the recognition. Over 20 of WillowTree clients’ apps have been featured in the Google Play Store and Apple App Store.

In terms of programming expertise, WillowTree holds Partner certifications from Google, Microsoft, Roku, SAP, and Adobe. But what trumps it all is that at every stage of product creation, qualitative and quantitative research drives the product design. To deliver a high-quality product, some of WillowTree’s key strategies include: 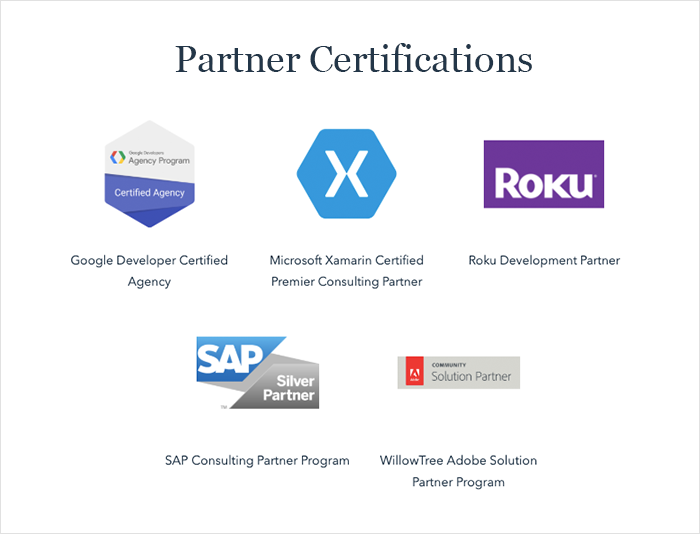 WillowTree has developed its own panel of mobile users that are recruited for user interviews, usability tests, surveys, card sorting, and focus groups. This user-centered research offers key insights to guide products and provides early feedback on their app UX and design while earning rewards in the process.

Once customer preferences are identified, WillowTree finds the best solution for user-specific personas using the Kano model to classify them into five categories and understand which features will be a pleasant surprise to users, and which they won’t care for.

Once the relevant features have been identified, WillowTree engages in road mapping feature hierarchy in the context of product’s ideation, technical architecture, and dependencies along with the data flow plan and loyalty program strategies. Taking the results into account, WillowTree can introduce the latest design touches based on Google and Apple mobile design guidelines.

For a product to have instant success and continuous growth, it needs to be in sync with the latest trends and analyst insights. In order to get this synchronization, WillowTree identifies the client’s business goal, competitive landscape, whether or not the product strategy complements the product vision, stakeholder and subject matter interviews, opportunities in the market, baseline data analysis and a published study review and analyst insights. 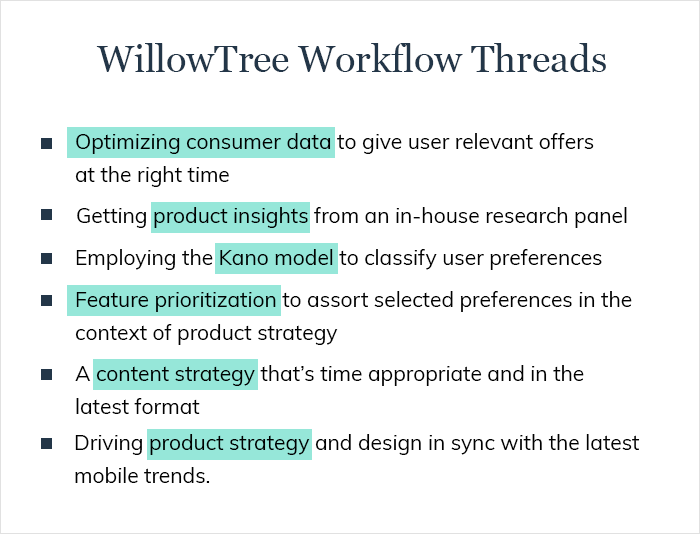 Fortune, Inc, Glassdoor and Great Places to Work, have crowned WillowTree as one of the best places to work in the tech industry and the credit can be attributed to the company’s workflow ecosystem that embodies creative ways to boost team productivity.

1. Innovation hour: WillowTree offers a dedicated time every week for its employees to explore their own interests, earn new skills and collaborate on appealing projects.

2. Lunch and Learn: WillowTree innovates the idea of discussion with a weekly get-together over pizzas to discuss the latest development in technology and design.

4. Developer Workshops: Every WillowTree developer gets the opportunity to attend one educational conference every year.

One for the world

As a member of Pledge 1%- a global movement that encourages corporates to pledge 1% of equity, profit, product, and/or time to causes of their choosing, WillowTree has launched its WillowTree Social Impact project where the company contributes 1% of its manpower and resources to build extraordinary digital products for non-profits and charities at reduced costs.

In the age of marketing messages bulldozing your mailbox, WillowTree still works with word of the mouth referral system. And, yet WillowTree is one of the only four agencies in the U.S. to have Apple and Google and Microsoft, all as their channel partners.

Naturally, WillowTree’s reputation across its potential clients is pretty surreal when the referral is from Apple itself. And, WillowTree has lived up to the promises. For instance, when Regal partnered with WillowTree, their in-app ticket purchases took a 290% hike.

It has also developed interactive TV and over-the-top (OTT) video experiences for some of the world’s leading media companies, including Time Warner, Fox, CBS, and CBC. And is always on the lookout for the next big thing.

PREVIOUS An Insight into Best Mobile Banking Trends of 2022