1. How does Table XI keep up with rapid changes in tech?

Fortunately, as different as we all are, there’s one thing, everyone, at Table XI shares: We want to know more. That constant curiosity is why we kickoff projects with design thinking. It’s why we’ve individually pushed our way into new technologies like IoT. And it’s why we’re constantly testing new tools and techniques.

It was comparatively early on for our mobile group to adopt React Native, in part because we had a client who we knew needed a cross-platform app. React Native looked like one of the most credible options at the time, given that we had tested most of the other ones, and the potential savings to the client was enough to justify using a fairly new framework. It was successful, and so we continued building on it.

Today, we’re constantly reassessing our React Native stack, and we have an article about the tools and techniques we use that we update every few months. Things will always be changing. That’s what attracted most of us to technology in the first place.

2. What value should an app development agency offer its clients?

First off, an honest answer on whether they need an app in the first place. Maybe what they need can be solved with a responsive website. Maybe there’s an existing piece of off-the-shelf software they can buy versus building something custom.

We start every project with deep discovery, which is basically our chance to talk ourselves out of a job. Too often people think in terms of the solution they think they need — app, software, IoT — and not the problem they’re trying to solve. When you bring in design thinking at the very beginning, you’re forced to really grapple with who your audience is, what you’re helping them with and how you can do that in the simplest way.

3. In a recent LinkedIn write-up, you mentioned an interesting notion about design thinking. Can you expand on that for our readers?

When I joined Table XI as COO, I was neck-deep in software development and Agile, both being extremely useful. But as we grew as an organization and I took the role of the CEO, I’ve gained a new appreciation for user research, rapid prototyping, divergent/convergent thinking and the design thinking side of the business in general. I can make more of a difference bringing creativity and innovation to a problem than I can bring technical talent to a solution. Design thinking is how we were able to help Tyson find a new use for food waste — and a new business model. I wouldn’t have been able to do that 10 years ago.

4. What’s a critical part of software development where many agencies falter?

Being honest about the risks. We detail all the unknowns upfront — we even have an elaborate software risk measurement system so we can put together much more accurate time and costs estimates for our clients. A lot of agencies will ‘wing it’, but it’s so easy to get out in front of your skis and really threaten the success of a project. You have to own what you don’t know. 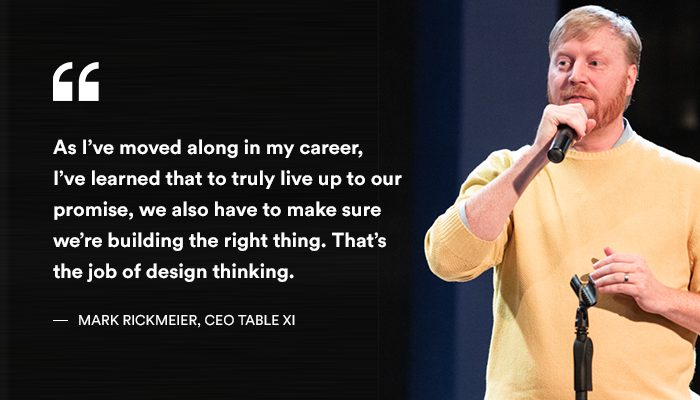 5. How have the apps Table XI has developed helped your clients?

For us to take on a project, we have to ensure that it’s going to have a measurable impact on the business. Honestly, with some of our clients like the voting app Brink, the app is itself the business.

Other times, it changes the fundamentals of the business. For the Journal of the American Medical Association, we built an app that could deliver continuous medical education credits in a much more convenient way to a new generation of doctors. For our manufacturing client Dickson, the app allowed the company to move its atmospheric measuring tools into the world of IoT, which really altered not just Dickson’s business model but that of the entire industry.

6. Who has inspired you during your career, and what message would you like to pass on to upcoming software agencies?

I have to say that we learn all the time from the people who would be our competitors. I started Ops Conf back when I was a COO because I needed a community of people tackling the same problems who I could talk to. When I became the CEO, I started Walkshop for pretty much the same reason.

My advice would be to think about other, similar agencies not as the enemy but as peers you can learn from. Pooling ideas and insights will do wonders for everyone. And, especially as you’re growing, you’ll find that you need to lean on these people when you need extra capacity to complete a task. If you build a solid network of people you can count on — who you can refer work to and get work from, it will do so much more for you than putting up defensive walls.