Former WillowTree Founder, Michael Prichard, on How Skafos is Shaping the Future of ML-powered apps

MobileAppDaily recently interviewed former WillowTree Founder, Michael J. Prichard, who is now the CEO and Founder of Skafos. During the interview, Michael talked about the release of Skafos V2 and how it would help app developers using machine learning to collaborate on the same platform, thus ensuring a good workflow. He also shared his future plans to release Skafos for Android developers and talked about his experience at the Apple Worldwide Developers Conference (WWDC). Read the full transcript of Prichard’s interview below. The transcript has been lightly edited for clarity.

1. Could you give us a brief introduction of your product and your journey in the mobile industry so far?

I’ve been involved with the mobile industry since March 2008, when Apple announced the iPhone 2.0 Software Beta before the iPhone App Store was a thing. I developed a company called WillowTree, which was a full-service mobile app agency focused on creating world-class multi-screen applications for partners. In 2016, we started a new company to look at the world of Artificial Intelligence, in particular, data science. This is how Skafos was born.

Skafos is meant to help app developers update their Core ML models that they’re running on a device, without the need of updating the app. This is a pretty important process when developers are using machine learning or Artificial Intelligence in their apps.

2. In the last few years, the world has witnessed a dramatic surge in the application of machine learning in various industry sectors. So, what was your motivation behind developing a mobile machine learning model delivery platform?

We started getting calls from our mobile friends asking for help around data science. They called us up and said,

“Look, we have an app that’s using the image classification model and is using two other models. And every time we need to make an update, which is pretty frequent, we struggle to get the user to download the new update.”

This was not working out that well because when developers are using machine learning in a particular business use-case, they need tooling for things like rolling back, to test models, for grouping, to improve the user experience. That’s why we created Skafos to help teams to have the tools they need to help make a good workflow. My five-year-old explanation for Skafos is that it helps update the app with the latest machine learning models. It’s a tool for developing teams to help them leverage machine learning technology. I’ve been developing software for 20 years, and we really need a platform like Skafos to help build excellent apps.

3. Skafos sure seems to be a well-organized platform to work on. However, who is the ideal Skafos client?

Skafos is for mobile app development teams, data science teams, and machine learning engineers; small businesses that need a platform to collaborate to ensure that everyone is on the same page. Just because a particular model is working in a particular manner on a laptop or testing system doesn’t mean it will work the same on another device. This is why developers need a tool for model validation to go back to their team to improve the user experience of a mobile app. 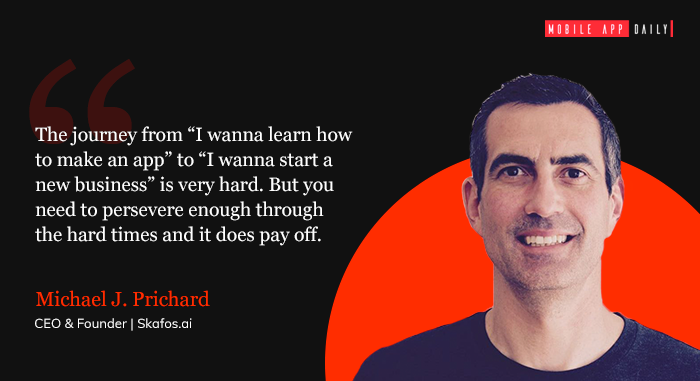 4. What are the unique features of Skafos V2?

Our new Python SDK, available via PyPi, enables developers to go right from their training environment and deliver models directly into the Skafos framework for deployment, only with a couple of lines of code.

We’ve updated our Swift framework that drops into an iOS app. Our new Swift Framework is available via both Cocoapods & Carthage and easily integrates with the existing XCode project, and our integration guide takes a developer step-by-step through this process.

There’s also some performance improvement: improved ability to download and validate apps to make sure that the updates in the model are correct before the model itself is updated for users. This is to prevent the apps from crashing.

5. Seems like Skafos is already equipped with features to integrate with major cloud providers, like AWS, Azure, Google, and IBM. Now that this is done, what are your future plans for Skafos now?

As every startup business, we rely on our customers to help drive our roadmap. We’re dreaming of giving better tools to conduct testing. We’re moving fast towards model monitoring and model validation, like how the model would perform on different devices, like on an iPhone 8 or an iPhone 10. We’re also looking at expanding the framework to include Android.

6. We understand that you’re attending the WWDC this year. How has your experience been at the conference?

My first WWDC was in 2011. It is one of my favorite developer conferences. We’re very excited about what Apple is doing. We need a little more time to digest the updates, but initially, I can tell you that things like the SwiftUI framework will make developing powerful apps easier and faster than ever. That’s one of the most exciting announcements. For developers like us, the tools that they’re giving us are game-changers.

I love coming to WWDC every year because everyone is very open to helping each other. The community is quite friendly and what’s really great is that there are a lot of very smart and experienced people who are just walking around and you never know who you would run into. It’s been a really exciting time. I would recommend that if someone is into Apple developing, they won’t regret attending the WWDC!

7. What are your thoughts on Apple’s decision to shut down iTunes?

What they’re doing is that they’re breaking iTunes apart. If you look at iTunes, it was initially started to sync everything with your device. But then they added music, and radio, and whatnot. In all reality, this spoiled the user experience. So the decision they made was to give people a chance to look at something new that isn’t stuffed with a lot of things at the same time. iTunes is merely splitting apart. For most, this change is difficult to cope with. This indeed is an end of an era, but change should be embraced.

8. Since it’s been over a decade that you’ve been serving the mobile industry, are there any suggestions for budding entrepreneurs and app developers?

Anything worthwhile is really hard. The journey from “I wanna learn how to make an app” to “I wanna start a new business” is very hard. But you need to persevere enough through the hard times and it does pay off. At times when you’re trying to figure something out and it’s already 2 a.m. and you’re looking at code and your eyes are about to fall out of your head, take a break and come back. Don’t give up. It’s not always roses. Starting a business or building an app is not a breeze. Everything worthwhile takes work but it’s worth doing, so just do it. Aim to get to the light at the end of the tunnel!