In the United States, Call of Duty: Mobile was downloaded 28.5 million times within the first two months of its release 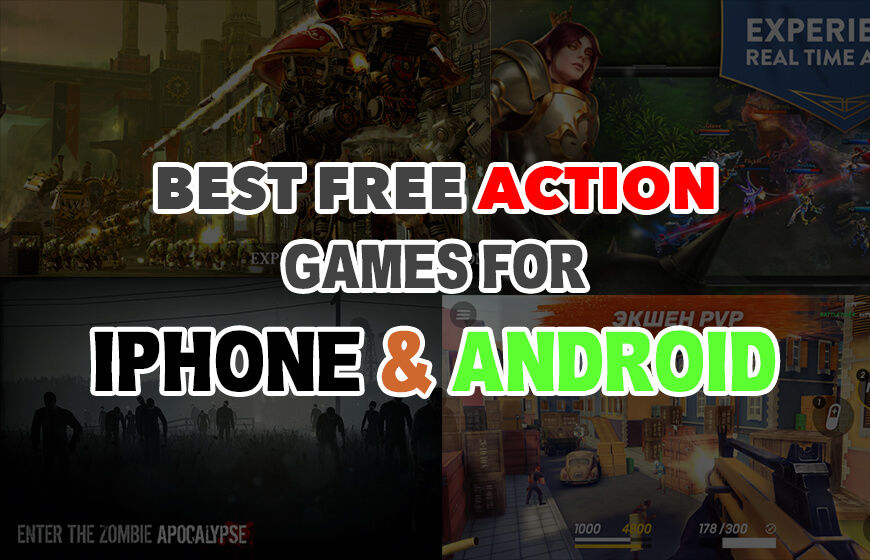 The gaming industry is huge and has taken over the phone market even before Smartphones came into existence. Mobile gamers have existed since the era of phones with 2 MB RAM. With time, the industry evolved and phones got smarter. Currently, with strong hardware configurations, the gaming industry is rapidly boosting and seeing many new trends almost every day.

If we are talking about the best smartphone games, well, mention of PubG Mobile is inevitable. In 2020, PubG Mobile generated global revenue of $2.6 billion. It was generated between January 01 and December 14, 2020.

The competition between top action games is huge. Some offer the best graphics, while others offer an amazing storyline. It might get confusing to pick one from the list of millions of games. Well, to solve that, we have curated a list of the 20 best action games. You will find a list with good reviews, popularity, and feedback to download games for Android and Apple devices. So, I suggest you keep reading to check them out!

Without further ado, let’s have a look at the best gaming apps you can have on your smartphones. Every game mentioned here has something unique to offer. Therefore, there is a huge probability that you will find a game with your taste.

As the name suggests, this spooky action game takes you on a road trip filled with weird people and zombies; not one or two zombies, but up to 500 zombies at once. The game offers a different story every time you start playing it. In short, you are never prepared for upcoming challenges in this one of the best action games for Android and iOS devices.

Features of Death Road To Canada:

Penarium is about a boy trapped in an evil circus and trying to survive while escaping. This 2D arena action game has contestants stuck in the circus with fatal traps. The lead character named Willy is your gladiator you need to protect. If you fail, Willy dies! If you win, Willy becomes a champion of the Penarium!

Some evil skulls have stolen all the treasure and gold from Castle Cubeton! Only Suzy Cube has the potential to bring it back. But she can not do it on her own. You will have to help Suzy Cube on her heroic journey to save the castle. You will help Suzy Cube go through 40 different stages to win the game.

You have to follow the narrator’s voice to explore ICEY’s world. This 2D side-scrolling action game is mischievous. You can not trust anyone in ICEY, not even the narrator. While playing the game, the narrator will try to mislead you to hide the truth of ICEY’s world. But you have to break the barrier and explore the world according to your will.

A young boy with his Gunboots is ready to explore a deep well to find treasures. You have the responsibility to accompany him on his journey and protect him. Control the boy to make your way through the darkness and hidden dangers waiting for you.

Apart from the interesting storyline, you will find playing this game fun due to its responsive controls. Moreover, with Gunboots, you can unleash the fire on whoever tries to make you their feast!

This battle royal action game has no friends but only enemies. To be the last man standing, you have to survive, fight, and defeat your opponents. The game is a carnage done for 3 to 5 minutes with 32 players fighting to be the champion. If you are more of a team player, you can join your friends and attack your enemies in a group. But remember, your enemies will not come alone either!

You need to build your JYDGE in this cybernetic world of law enforcement. You are responsible for the law at Edenbyrg. Explore the sleeping city and eradicate the crime you see anywhere. Use weapons like lead, rockets, guns, electricity among others to defeat the criminals of Edenbyrg.

This epic showdown between Nikola Tesla and monsters of H.P. Lovecraft now depends upon you. Use Tesla-Mech battle robots and wipe out monsters trying to attack you. Fight and dodge with the help of Quantum teleport. The game is available on Android and iOS devices with a price ranging between $8.99 to $9.99.

Features of Tesla vs Lovecraft:

BonusXP, Inc. has developed this game in a series. You are helping Hopper and the kids in protecting Hawkins against eerie creatures. This one of the free action games for iPhone and Android devices will take you on a journey of 1984. The game has been designed to offer you the experience you had received while playing the game back then.

Witcheye is an old-school but colorful game developed by Devolver Digital. The game follows a character through a magical world of knights and wizards. You will play the game as a flying eyeball who was once a witch. After a knight and wizard stole her spell ingredients, the witch turned into an eyeball looking for vengeance.

The ailment is one of the best horror and action-packed smartphone games existing at the moment. The game has a Sci-fi touch with a spooky ambiance to make it fun to play. The engaging story of Ailment takes place on a spaceship drifting in space far far away. You have just woken up at an unconscious stage of three days, and now everyone you knew wants to kill you. Do you think you can survive through this game?

Features of Ailment and Endurance

This multiplayer has a Story mode as well for solo game playing experience. The storyline is filled with twists and turns to surprise you throughout the game. Moreover, you can also build your challenges and share them with other players. The multiplayer mode allows you to team up with up to 4 other players.

Brawl Stars is a game designed for fast-paced action game lovers. The game has fun modes such as 3v3 multiplayer and battle royale. As you progress through the game, you can unlock Brawlers with super abilities to make your enemies vulnerable against you.

This epic action game by Playdigious is available for $5.99 in the U.S. market. Your character is a failed alchemic experiment. Throughout your journey on the gloomy island, you will kill many enemies in this dynamic action-packed 2D game. The Nonlinear Progression mode makes this game cooler by opening up a new level every time your character dies in the game.

The zombie apocalypse is here and your character needs your help in saving his family! Run through different scenariOS while killing zombies at the same time. Unlock powerful weapons as you progress through the game to massacre herds of zombies dying to eat you (pun intended)!

Features of Into the Dead 2:

COD Mobile has gained a great reputation in the U.S. for its stunning graphics and multiplayer gaming modes. The game allows you to play solo with other real players as your opponents, or you can team up. Your journey towards victory depends upon your skills and will to fight. The action game has multiple servers filled with players from all around the world. To win, you will have to be extraordinary!

Features of Call of Duty: Mobile

The list of these games included some of the most loved games from the industry. These action games are popular amongst fast-paced action game lovers. While Nostalgia games such as Stranger Things are the perfect choice if you like quirky music and old-fashioned gameplay; on the other hand, Call of Duty is a game you will love as an alternative to PUBG.

If you are someone who travels more often or has a lot of free time at your hands, you can install any of these action games on your smartphones. Apart from giving you a fun gaming experience, these mobile games will also help you in your brain exercises.

If you are planning to build a mobile gaming app, you can contact MobileAppDaily to get your app reviewed. It will help you in getting an idea from experts to ensure the app is fine in terms of quality or if certain aspects might still get some improvements.

NEXT Google Maps Gets An Update To Support iPhone X

Mobile Apps For A Bigger And Smarter Vocabulary [2021]

You have the money, you have a bucket list, but that is not the end of everything. You need the right money management skills, lest all that you have earned will leave your side in the blink of an eye.You start spending more than you make and keep piling up on ugly debts. Therefore, you need to

5 Best Homework Apps That Will Make Your work Easier [2021]

When it comes to students going back to school it means going back to the system and homework is part of the system. Sometimes homework in college is used to calculate your overall school grade.The most important thing is to keep track of your homework and find easy ways to effectively accomplis

In this era of the digital world, technology is constantly affecting our lives, either in a good way or in the wrong way. The backbone of the prime technology of the world is the internet and this is an amazing discovery made by humans to connect the whole world in a single loop. We have seen a lot