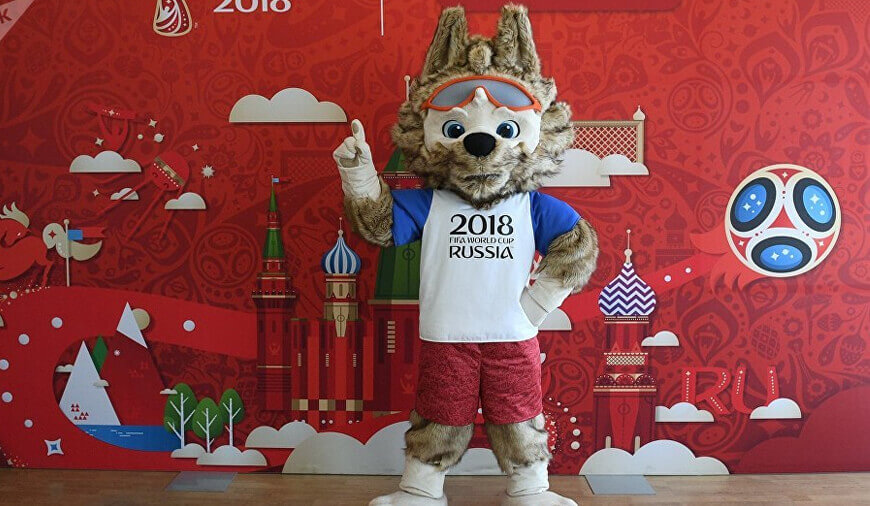 What comes to your mind when I say football? Even If you quietly mumbled the FIFA World Cup, welcome to the most enthralling journey that is only going to add flavor to your love for the football. FIFA world cup is right here. Probably one of the reasons for soaring the global temperature.

Even if you are not a real football fan, it’s hard to miss the rage of the football world cup, the entertainment, the last-minute drama, the show-off of yellow and red cards, the rising temper between the teams, the tantrum it brings along and many times the rampage between the fans.

Yes, the craze for the football world cup is hard to miss. And, in case you have got the fever, the write-up can help you increase it even more. So, let your liking for Messi, Ronaldo, Iniesta, Neymar, and Gerard Pique get to the extreme and let it be your ultimate passion for this football season.

It is the official FIFA offering for football lovers. The FIFA world cup 2022 official app gets you acquainted with the latest news, photos, hard-to-miss exclusive videos, and interviews right from the host nation, Russia.

Having the official tag puts more responsibility to the app to get you the live streaming of every significant happening from the ground zero. FIFA comprehensively covers all sports events along with analyzing the qualifying games at the World Cup 2022 in Qatar. 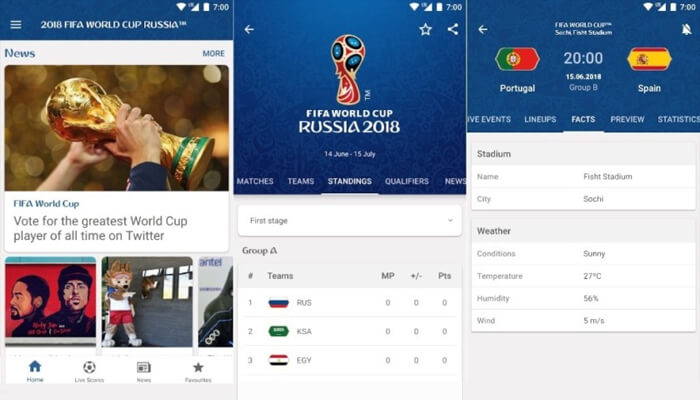 The natives of North America are a fan of ESPN for the exclusives it offers. With ESPN, you can catch even the minute of happening from the ground. Besides getting the in-depth coverage of the FIFA world cup 2022 matches, the app has a dedicated category that displays the group stage tables, fixture dates, kick-off times, statistics, venue details, and other exceptional details. 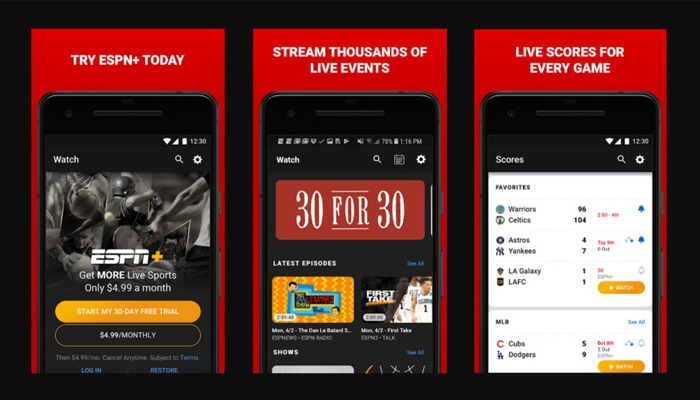 Fox Sports has grabbed exclusive rights for FIFA world cup 2022 matches. The app has been updated with a dedicated Match Centre to provide live reports along with the stars. The app lets you custom highlights that you can share on the different social networking sites. There are five different live feeds for every match. That’s probably the icing on the cake. 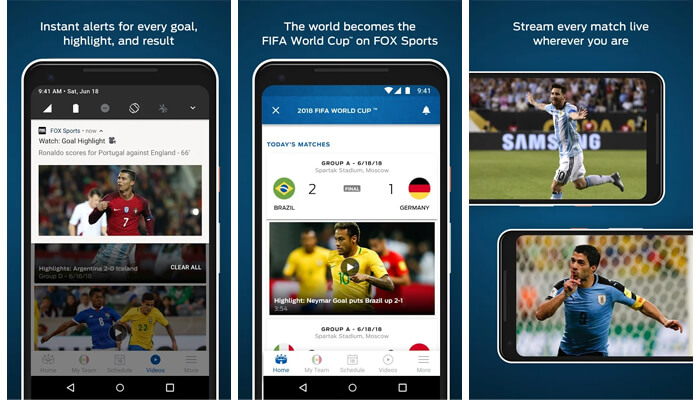 Get this app if you like denoting it “Football” more than “Soccer” as BBC Sports gets you the UK spin on the sport. The broadcaster app has all the updated information that you can easily rely upon.

After all, it is from British public service broadcaster. Also, get the game preview, after match analysis, and possibly everything that FIFA world cup 2022 has in store for you. 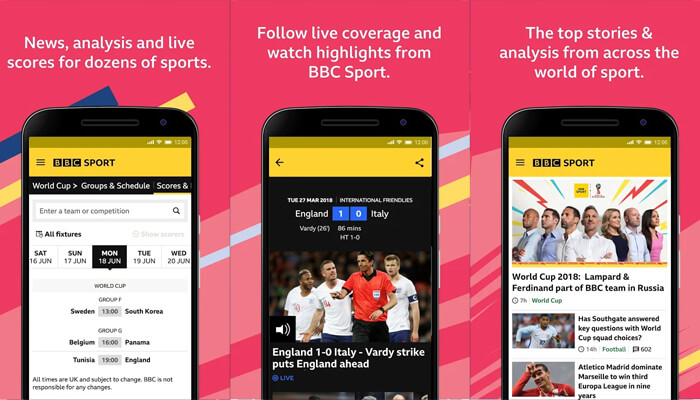 This FIFA world cup app is for those who wish to monitor even the slightest of the progress of any given match. The app features the “favorites” function that filters a user’s favorite teams and expected matches as per their preferences.

The score updates come in the form of notifications to the users with the exclusive's ground details. Additionally, there is information on the clubs for the users. 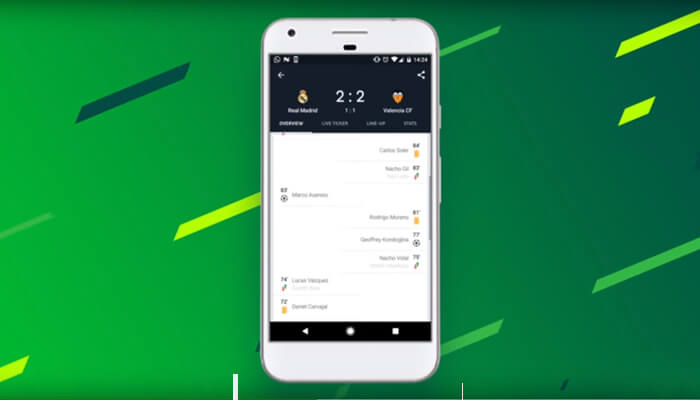 NBC Sports is for Spaniards. The app offers details on FIFA world cup commentary in Spanish, so, you can grab the taste of fútbol (Spanish for football) in an entirely new flavor. And believe me, it’s fun in case you have the basics of Spanish clear. Who knows the app can serve you as an excellent language tutor. 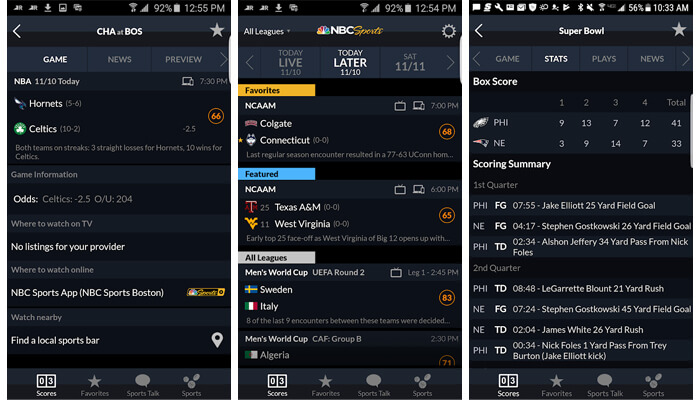 Yahoo Sports is for those Soccer lovers who have preferences even in a football match. It is one of the best FIFA world cup apps that filter users’ choices on their preferences.

The app displays the related news and the data in real-time. Another reason to get the app on your smartphone. The app allows you access to some renowned sports including rugby, hockey, baseball, tennis, and more. 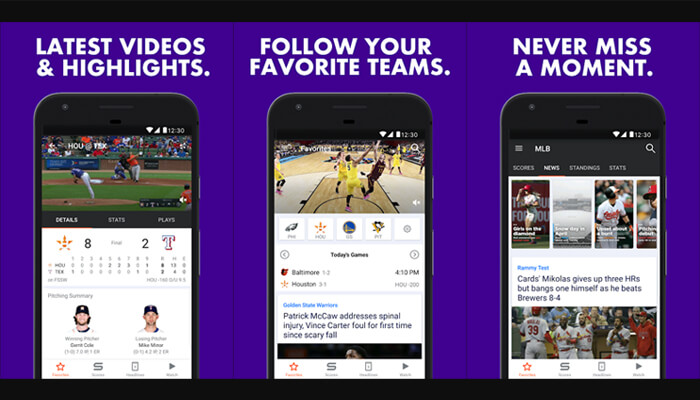 YouTube needs no mention when it comes to listing the live-streaming apps for the FIFA world cup. Well, it asks you to be a YouTube TV subscriber to watch the live-stream of all the matches.

YouTube is believed to host official highlights in more than 80 countries from official FIFA broadcasters such as Fox in the U.S., the BBC in the U.K. and many more. 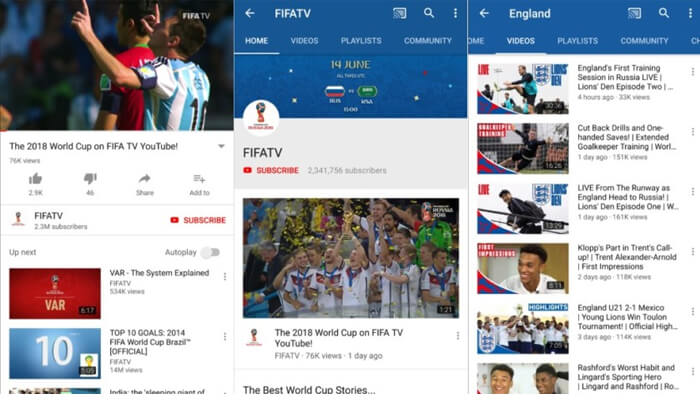 FotMob Soccer Scores Pro is just like any other app to get the updates on FIFA world cup. It offers the users an opportunity to get all the updates along with viewing the match schedules. 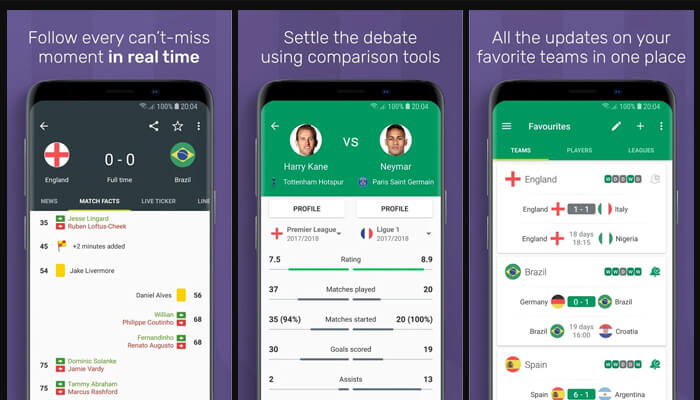 The app also gets the information on Premier League, Bundesliga, La Liga, Champions League, Serie A, MLS, NASL, and many other matches as well. Additionally, there are comments from football experts that users can read in real-time.

Univision Deportes is another offering that gets you official football world cup news in Spanish. The app is available for free merely with a download. Univision Deportes provides the live broadcast of the football world cup.  The app not only provides the announcements of the games but also the standings, interesting moments, news and other current happenings from the game. 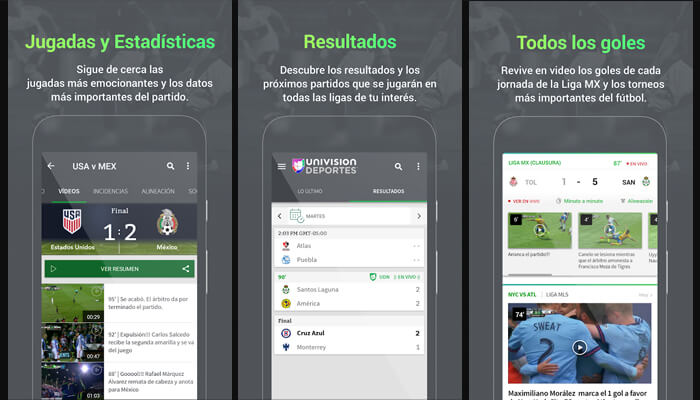 Let your love for this year’s football world cup bloom even more with any of these applications. It’s the sports that soccer fans swear by, do try tasting it once to know the ultimate flavors the game serves. Well, nothing can match up to watching a football match in the stadiums but, it’s always better than nothing.

NEXT Top iOS 12 Features That You Should Know

Mobile phones were invented to serve the most basic purpose of calling. Ever since the functions in Smartphones have advanced to include high-quality cameras, voice assistants, and much more, yet we use the same old dialer pads.Don’t you think it's worth paying attention to a good phon

With the evolution of mobile technology, users and bankers, both are relieved from long lines and hundreds of documents to take care of. Now, just a single screen is enough to transact as much of the amount as you want.With mobile banking applications, financial activities have become easier. Ac

Our journey to the world of endless info-media and audio-visual content was started with a desktop for most of us, then it shifted to the laptop and finally reached to our palm in the form of smartphones. The next step in entertainment was introduced in the form of AR and VR mask apps.Thanks to

Writing a text quickly, without looking at the fingers, making sure the copy is clear, strong, and error-free in a one-go sound like a fantasy. It is recommended to read out what is written the next day, but deadlines are merciless. Often they leave no choice but to release the finished text right n

The wait is finally over as Black Friday is here (well, almost here) and the people are just getting started with their Christmas shopping. When it comes to shopping, almost every person has their own huge list of items and gifts that they are planning to give their loved ones.And since its shop