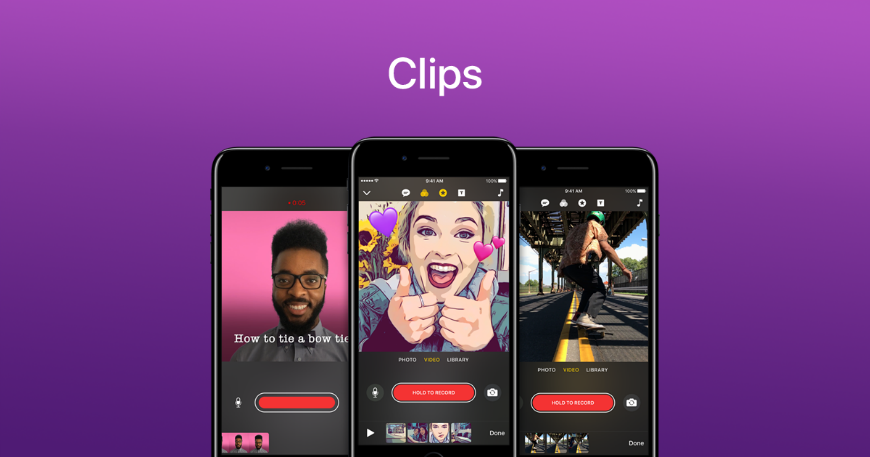 A few days back, Apple introduced a fun addition app for the apple users by announcing the release of Clips. The new video app is a new member of the mobile apps store of Apple. Clips allow users to record videos with fascinating features. In a way, it is similar to the social networking giant Snapchat, however, it is a tool instead of the platform.

Clips allow the user to create an ‘expressive video’ with innovative combinations of photos and music using amazing features. You can share your creative and amazing video over social networking portals like Facebook and Instagram.

This new engaging application for apple users seems to borrow some of the features of Instagram and Snapchat. Features such as real-time filters, speech bubbles and other designs that can be added to the videos. Apple users can grasp this interactive video making an app for free at the starting of April according to the Apple report.

Clip can be installed and enjoy on iPhone 5s and later, latest 9.7 iPad, all iPad Pro and iPad Air models. Also available for iPad mini 2 and later, iPod touch 6th generation, all these devices must be running on iOS 10.3.

Clip is a new generation social video mobile app for iOS users. Its simple user interface with easily accessible features for video capturing makes it an app that can be the next viral thing over social media.

However, it lacks the feature of text scribbling over the created video that can be done on Instagram or Snapchat. Apple with this new application trying to uplift its value and marketing figures in the social media world.  This App can bring back Apple in the competition of apps but it all depends on user's interests.

In its quarterly financial briefings, Apple has confirmed the iPhone sales figures are falling. While the company is still making a huge amount of money from sales of the device (it makes $31 billion of revenue), it is 17% lower than the same period in the year before.Fewer people are buying iPh