Know About React Native 0.60 Update With its Compelling Features 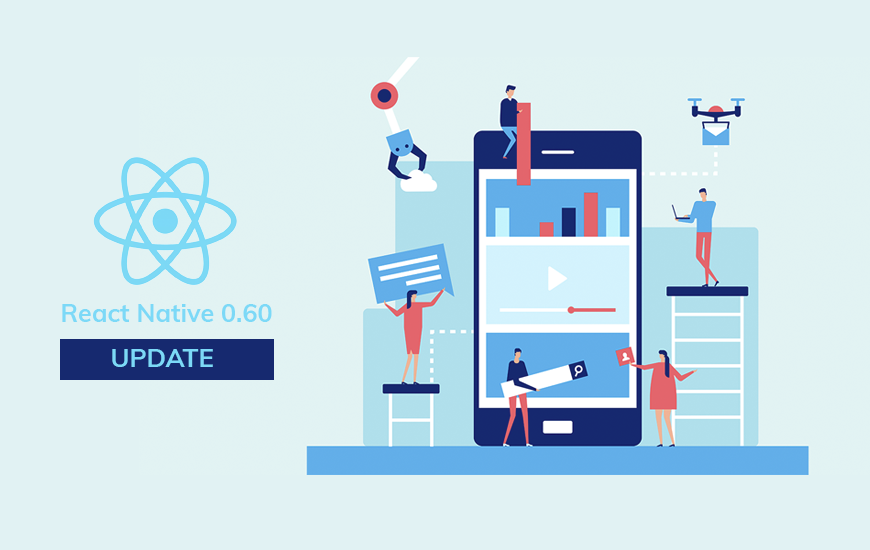 React Native can be defined as the open-source framework for developing sophisticated mobile apps. Being developed by Facebook, it is one of the widely used models that are used for engineering cross-platform mobile apps for iOS, Android, Windows, etc.

Embedded with the profound technological stack, React Native is a highly preferred choice for a mobile application development company. It has been estimated that, implementing it boils down the development cost up to 50%.

Recently, loads of new updates have been introduced in the React Native framework. Some of them include:

Of late, the React Native upgrade version has been introduced by Facebook. More commonly, it is known as version 0.60. Needless to say, the development community and the users are pretty much thrilled to witness the features that are being introduced into the React Native app version.

React Native is a marvelous example of the open-source development model, that is different from the other versions of React, launched earlier. It takes into account all the background processes and very finely interrupts the JavaScript that is developed by the engineers. 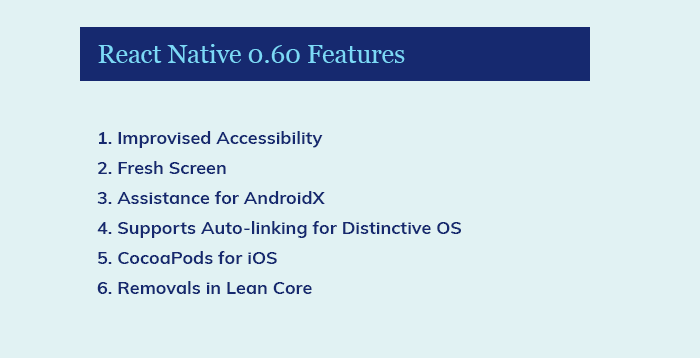 With the advent of fresh changes in version 0.60, users can openly optimize already prevailing React Native features that are associated with React Native 0.59. Furthermore, the plentiful of issues that were connected to previous React Native versions are also being modified to deliver a glitch-free experience to its users.

Find out here some of the major updates claimed that made their mark in React Native upgrade 0.60.

New version 0.60 is released with multiple and versatile improvements on the grounds of accessibility parameters. The APIs front associated with iOS and Android have been rectified impressively. Needless to say, the catalog of improvements is undeniably impressive.

Updates such as announce for Accessibility, action support, enhanced roles, flags and many more have been introduced. For capturing the top results, one must hire react developers to reap out the right benefits so as to renovate their overall cross-mobile app development ecosystem. Well, this time the implementation is much easier and simplified and thus, improved React Native performance.

With the advent of the new release, there comes an all-new and fresh screen. This one is an important part of the update, as the released screen is much fresher and user-oriented. It is designed in such a way that delivers crucial statistics such as editing App.js, document hyperlinks, and guides to power the debug menu and how to resonate with the website designing standards.

With the emergence of a new version of React Native, AndroidX has come into the scene. Since the migration process of React Native requires new platform switching of AndroidX (Android Extension Library) thus, all the codes are also migrated. Due to this complete process, React Native apps are using the AndroidX in a very seamless way.

For avoiding the glitches related to the AndroidX, the squad at React Team has introduced a new solution called as Jetifier, which is all the way compatible with the  React Native.

The libraries of React Native are embedded with native and cross-platform development-oriented code. This is an innovative strategy that enables a React Native development company to reuse the code in a more healthy way. The React Native team has introduced a lot of major changes that help to ease the auto-linking procedures.

As per an ios development company, CocoaPods are charted as the application -level dependencies assistant, which is specifically meant for Swift and Objective-C Cocoa-based ventures.

The new version of React Native 0.60 is attuned to CocoaPods when it comes to iOS-based programming by default. Hire react native developer, for harnessing the best of its advantage. Under this approach, the developers are required to unwrap the iOS code by deploying the “xcworkspace” file.

The innovative changes are inclusive of the Webview and NetInfo that are being counted as the individual repositories. As per the reports, they have been taken off from the repository of React Native. Geolocation has also been withdrawn, as per the feedback received from the community.

On the grounds of performance as well, React Native has concurred as a lot of recognition for its sound performance standards. It has been estimated that a React Native app very impressively, reduces mobile app development time to a great extent. Furthermore, it even guarantees that the developed apps work quite seamlessly across both the Android and iOS-based platforms.

Looking at the foreseen time, where the developments are taking place at a wider pace, undeniably the developer community is required to shift towards the React Native to meet the diversified user requirements.

Since the demand for the React Native is thriving these days, it’s more likely that it can augment in the passing days as well. With React Native components being released almost every now and the implementation of its features is bound to grow exponentially.

Undoubtedly, cross-platform app developing is ruling the industry and developing the app with a clean UI and with enhanced capabilities is a must. With the knowledge of React Native, a developer can easily build React Native apps for Android and iOS and that too with ease.

Here are a few apps built with React Native:

Businesses are nowadays hoping to reach their user base across platforms and thus, in such a case, React Native versions seem to be the best option. Therefore, check out the new version of React Native and sharpen your mobile apps to garner impressive revenues in this competitive market place and to reserve the users in a longer run.

PREVIOUS Kotlin Vs Java: Know Which is The Best Programming Language for Android App Development in 2021?

NEXT Fintech Startup Curve Raises $55M For its Mobile Banking App, Boosting Its Valuation to $250M

Harvey- the hurricane, mutated into a tropical-storm which landed in Houston on Friday, causing the catastrophic flooding in the entire city. The storm has already killed 7 people in this Texas City and forced thousands to evacuate their homes.Several portions of the fourth largest city in the U

Is Buying Facebook Likes an Effective Way to Boost Your Businesses Exposure?

In the hugely overcrowded social media environment, the battle to get noticed is real, and it’s not easy. From devising videos to coming up with survey posts, the social media has transformed tremendously.Interestingly, the social outreach is not bound to any one platform; we have Instagra

Every now and then Android comes with its new updates or patches that is said to secure your smartphone. Every patch in the update works as a layer of protection, The more you have, the better for your device.It’s widely known that Android devices receive the latest updates after a gap of

In an effort to raise awareness about the LGBTQ community and give them space from society's imposed restrictions, Blued recently organized a revolutionizing film festival, which invited short movies from independent filmmakers on LGBTQIA topics. This is also a way for Blued to get an official c

Since time immemorial, Google has used a single metric for showing the best apps in the search results. Till now, it was all about star rating given to the applications in theGoogle search result feed. However, the former method is speculated to be replaced with a new way for users to determine