Global VR market value is expected to reach USD 49.7 billion by the year 2023. 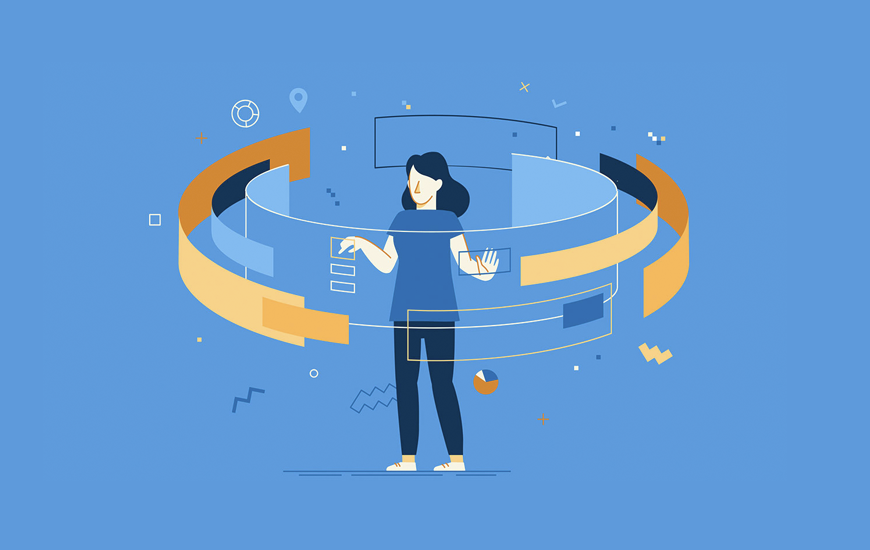 Virtual reality is one of the most amazing trends in the world of technology. Touted as the immediate future of the market, there is no doubt that it is expanding.

The reach of virtual reality app development is currently spreading in the industries these days.

There are several VR devices such as HTC Vive and Oculus Rift, which are constantly available to the customers. It is now said that VR technology is going to be a huge deal in the current and coming years.

Also, VR technology is very important to market the product to several customers in different industries. These industries include healthcare, education, military, and architecture.

With VR apps, businesses are finding a new way of introducing their products and services. However, the market still has a lot of room for growth. There is a need for VR app development in order to create wonderful apps.

These apps would frame the future of the companies and businesses which are yet to make a mark on the world. Let us have a discussion about these apps and how can one develop these apps.

Virtual reality is definitely the connecting link between the virtual and the physical worlds. Well, the past few years saw the emergence of more than 100 startups for VR.

About 60% of these startups got their name and fame in the current year. Bengaluru is currently on the lead with the maximum number of VR startups. Delhi also doesn’t lag behind with about 25% of the shares in the startup world.

Mumbai is following the lead with about 13% of the share. All of these facts indicate that the market growth for VR apps is increasing at a very fast rate.

So, it is essential for VR Development Company to start making an investment into the apps to change the future.

Here are some of the important virtual reality demographics that people need to know about:

With virtual reality app development, there are new and advanced apps that are in the market. Here is an overview of some of these apps. The applications are able to run on Android and iOS mobile devices.

Virtual reality technology is currently gaining its share in the gaming industry. The Zombie Shooter VR game is one of the examples of such games. The app does exactly what you would understand from the name.

The player will be able to kill the zombies. Originally a paid application, this app became free after some time. This was due to the increase in the competition that took place in the ecosystem of VR.

However, to increase the experience, one might have to upgrade the application to reach the full potential of gaming. The controls present in the game are the best things.

The players would just have to look at the zombies and the weapon is easily triggered. So, this VR app is one of the best in the gaming industry at the current moment.

When it comes to mobile apps, Google Cardboards is one of the oldest names in VR technology. The application still holds a very high position in the list of famous VR apps.

The reason for building the app was to depict certain possibilities in the VR world. This app, till this day, remains a method for people to enter the virtual reality world. There are different technologies that take place in the Google Cardboards app.

The application is free and there are different in-app features provided in the application as well. There is also an integration with Google Maps for sure.

This game in the VR world is another one of the best names in the list. VR sniper provides a chance to the players so that they can feel like real-life snipers.

Weapons have their triggers with movements in the head. The app remains free of cost in the Google Play Store and iTunes.

However, there are some in-app expenses in order to upgrade the application.

This will allow users to explore different places and destinations. Currently, there are 200 expeditions in the application. There are more being added with the passage of time.

Needless to say, there are new and different trends taking place in the VR world. So, it is essential for companies to know about these technologies.

This is to provide an insight into the development of VR technology in the world. Well, here are the recent trends which can help people gain knowledge.

The fear of public speaking is prominent in people these days. There is a technology, PanicLobster which is a VR app. This app will let people batter their fears and then encourages public speaking.

The concept is pretty simple but the results are powerful for sure. Users are able to enhance different situations in the virtual world. This helps in rehearsals and other presentations as well. People can also use it to teach classes and other options as well.

The virtual reality property development concept is not a stranger to the people these days. There are different VR technologies that can allow people to see properties in a 3D format.

Such technologies would allow better sales for properties and hence help the businesses in increasing the revenue. This is also good news for users as they can view properties from the comfort of their homes.

Another benefit of VR in the world is in employee training. This is outside the fields of technology and science. Virtual reality plays a very important role in the world of business.

With the help of employee training technologies, VR is currently increasing in popularity. There are programs in the VR headsets which can help in the job sector of the employees for sure.

One of the most important and futuristic developments of VR is in the field of education. There are VR headsets in the schools these days which help students go on field trips all around the world. VR education is one of the lucrative fields where people can experience the best of the benefits for sure.

Essential Features to Include in VR Apps

It is essential for the virtual reality app development company to know about the features to include in VR mobile apps. There are many apps in the market but not all of them have the same popularity.

The world has mobile apps for VR games, photos, expeditions, and other options. But then, not all the apps are able to provide the best results. So, the use of features while building VR mobile apps is essential.

How Much Does it Cost to Build a VR Application?

Virtual Reality development costs pertain to the choice between the development of VR games and VR apps.

There are different factors that decide the cost of virtual mobile apps. Here are these factors which help the developers in creating mobile apps for the world.

For the mobile gaming, VR app cost is supposed to be 50000 to 100000 USD. These numbers might be typical. However, the cost tends to be higher for complicated projects.

Future of VR Apps In The Industries

Virtual reality currently remains at the initial stages when we are talking about the potential. Virtual reality development needs to have a lot of improvements as well.

There are new headsets of PlayStation VR from Sony and Samsung too. These headsets are really getting attention for over the last months.

The emergence of virtual reality property development is something that is helping the industry as well. People now have the means to view properties with more advanced technology.

Apart from that, smartphones are also adopting the virtual reality world. This means that there will be more applications and technologies in the near future as well.

The focus and attention of VR are currently on industries such as:

Therefore, after surpassing all the boundaries and expectations, it is a prediction that VR will be a part of the next generation of computing and technology.

The traction that VR is getting in the market these days has room for some improvement. It might take some time in order to infiltrate the market in a mainstream way.

Applications and technology are currently very limited. And hence, there is a need for progression in the program. This is what the virtual reality mobile app development companies need to focus on.

VR technology provides an alternative method of looking at the world. Hence, users can easily immerse themselves into different destinations. That too, from the comfort of the homes.

With VR, people can explore far off places, interesting and hostile environments as well. Whether it is the Amazonian rainforests and sea life, there is nothing that VR cannot do.

Sensory VR is another one of the most important features that might be an interest to the people in the future. The market for this technology is currently on the phase of growth. There is still some space for the enhancement of this particular technology.

If the developers tap into the senses, then there is a chance that virtual reality will have the best effects on the people. With benefits such as 4D cinematic experiences, we can say that VR is going to change the game for senses.

When it comes to Virtual Reality apps, the market is currently very hot for technology. There are new and amazing technology trends which are a part of the world.

Not only do these technologies lend a helping hand in the industry but also help in the improvement of people’s lives. So, there is a sudden increase in the demand for virtual reality mobile apps in the present and future too.

So, the developers and companies need to focus on adding new and advanced features on their mobile VR apps to enhance the progress of the technology.

PREVIOUS Top Common Mistakes To Avoid Before And After App Launch

NEXT How To Hire The Best App Developers: A Comprehensive Checklist (Updated 2020)