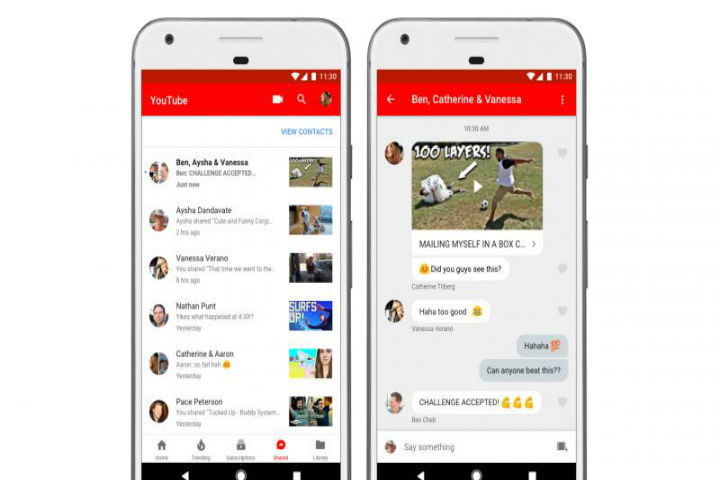 YouTube is rolling out the video sharing feature in the mobile app for the users starting from today. The video sharing option will allow the users to share the selected videos with their friends. The added feature allows the users to chat with the other users, which make Youtube now a chatting platform also.

The new sharing feature lets you share the selected video to your friends individually within the app. The sent video will open the chat window where users can chat below the playing video. While chatting the video will be pinned up in the upper portion and continue to play which gives a more real time experience to the users. The video will stick to the window and keep playing while scrolling down during the chat.

The idea behind the integration of the sharing option is to take the all sharing action of the videos, links, and chats over the social media and chat apps under the YouTube roof. Whenever someone wants to share a video with his friends or family the user need to either copy the link to send or share it over the social media platform. Now, with this feature, the user can easily send the video to the intended person and can chat about it. Until now people preferred the chatting apps to share the videos, but this addon could change the things around.

In addition to the video sharing feature, the users apart from chatting can also reply a received video with a video or by giving a  heart. A group sharing option is also available with up to 30 peoples.

The feature is too easy to use, you just need to select the recipient from your phone’s address book, the app will fetch those from the contacts. However, currently there is no option to block the stranger's request, but you can deny those requests. YouTube mentioned that the company will keep enhancing the feature in the coming time and will make it more secure and reliable for the users.