Stocks fell, investors disappointed, even after the record 9.6M subscribers in Q1 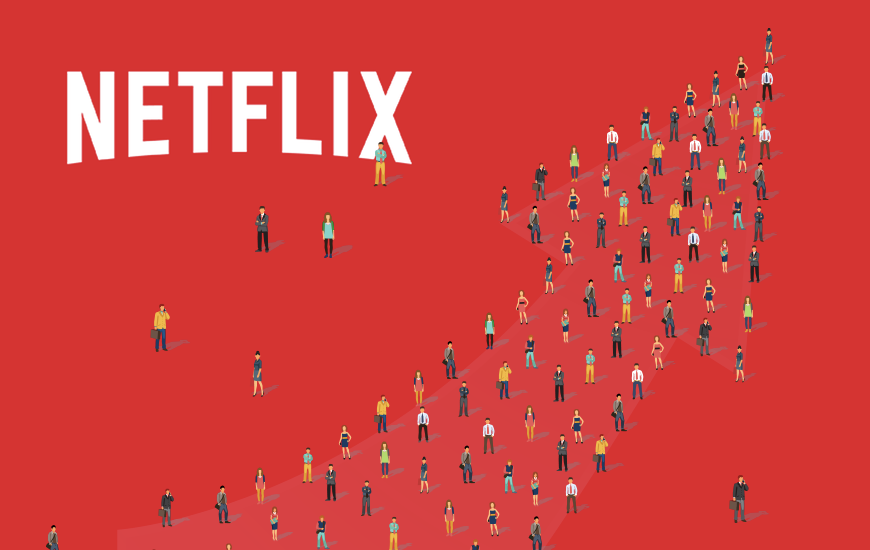 Netflix has started the year with record-breaking subscriber gains in the history of its streaming service. The number of Netflix subscribers have increased by 9.6 million worldwide during the first quarter of 2019, with year-on-year growth of 16%, exceeding the projected number both by Netflix and Wall Street analysts.

Netflix is targeting to add 5 million subscribers during Q2, which would be 8% lower than its growth in the same quarter last year in 2018. These targets by Netflix fall below the analyst’s forecasts which have made it lose its share price by 1.8% recently, in after-hours trading. 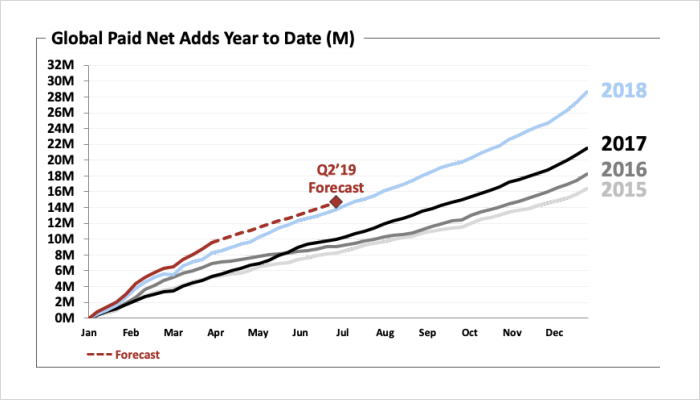 Netflix tested the bounds of its popularity with a recent price hike, that raised the price of its most popular plan from $11 to $13 monthly. The prices were hiked for the new Netflix subscribers in January and it has recently been rolled out for existing customers in the US, Brazil, Mexico, and parts of Europe.

Netflix, regarding the price hike, stated

“The response in the US so far is as we expected and is tracking similarly to what we saw in Canada following our 2018, Q4 increase, where our gross additions are unaffected, and we see some modest short-term churn effect as members consent to the price change.”

Netflix also reveals the viewership numbers of some of its original shows. It says “The Umbrella Academy” was viewed by 45 million people during the first four weeks of its release. “Triple Frontier” was viewed by 52 million and “The Highwayman” is on track to be watched by 40 million people.

Netflix also revealed about testing some of its new products in Q2. It will release weekly top 10 lists of popular content for UK viewers, who want to watch what’s trending and what other people are watching.

Meanwhile, the competition is going to heat up for Netflix towards the end of the year, when both Disney and Apple plan to launch their own video streaming services.

Disney’s video streaming app, “Disney Plus," is planned for a launch in November, initially at a cost of $7 per month. It is considered to be a bigger threat as it will feature a library of classic films and some original stuff by Disney, and Disney is known for producing churning out crowd-pleasing entertainment.

Apple has not disclosed much about the price, release, and content of its video streaming service, but it will include some original programs featuring renowned stars like Oprah Winfrey, Jennifer Anniston, and Jason Momoa.

“Both companies are world-class consumer brands and we’re excited to compete; the clear beneficiaries will be content creators and consumers who will reap the rewards of many companies vying to provide a great video experience for audiences.”

“We don’t anticipate that these new entrants will materially affect our growth because the transition from linear to on-demand entertainment is so massive ​and because of the differing nature of our content offerings​.”

The company has invested another $460 million in the quarter and expects it’s negative cash flow this year to exceed last year’s total of negative $3.5 billion, as the company continues to spend its money in the lined up original TV series and films to attract more subscribers.

PREVIOUS What are the Best Practices for Dashboard Designing in 2021?

NEXT Upcoming Trends Of Data-Driven Marketing In 2021