Data is valuable and corporations know that. Protect your data from thefts and hacks with MyPrivacy app. 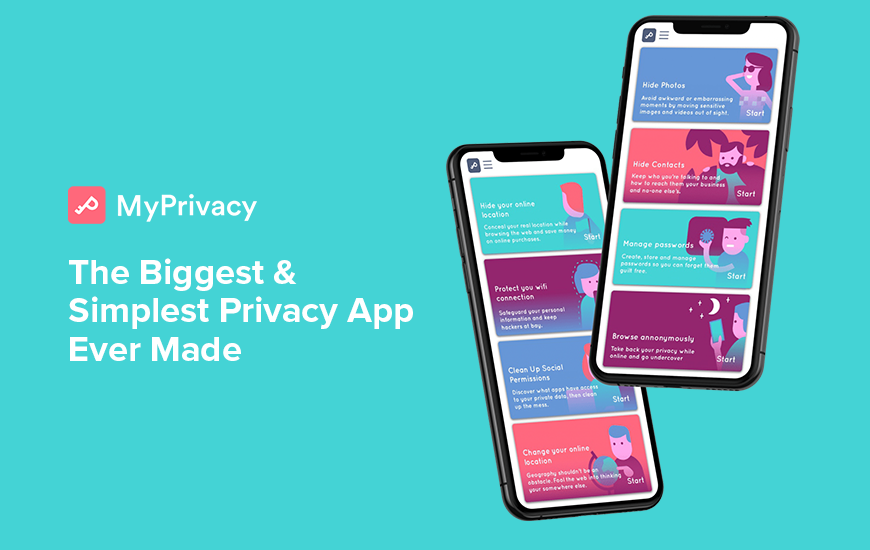 Online Permissions Ltd. has been working to protect consumer privacy since its establishment in 2012. With more than 3.5 millions of downloads from their previous applications, they have understood the need of people who have had enough of large corporates accumulating their data for personal use. Yoav Degani, Founder and CEO of MyPrivacy, is a serial entrepreneur and privacy expert who has already seen success in his previous data security venture MyPermission.

The Dilemma of Data

We all read the news when Facebook was accused of allegedly leaking data of 267 million users. Some even suggested that the data was used for rigging elections, but let’s just keep it out of the purview of this write-up.

Data always has its relevance in the business world. Taking educated decisions has always been in fashion and analysing data samples is an age-old practice. But after the digitalisation of the world and people getting connected through their smart devices, the availability and scope of data have reached a point where its usage may lead to extravagant results. Here are a few types of data companies can use for their benefits:

With clear indications from corporations to use any means to accumulate data for “research and development” purposes, there is a need for common users to take ownership and control their data from being misused. Here comes the MyPrivacy app.

The developers of MyPrivacy, particularly Yoav Degani, Founder and CEO of MyPrivacy, have a firm belief that everyone should have control over their data and with whom they are willing to share it. With shady practices being normalised, people don't understand the consequences of this “trivial” issue. In the words of Yoav,

“Right now, when it comes to the average user there is hardly any data privacy. That’s mainly because they lack the knowledge and simple tools to protect their personal information and online activity. MyPrivacy is the first app designed to help the average person understand their vulnerabilities and easily protect their private content and information.”

Studies show that erosion of personal privacy has become a severe societal problem in the budding digital world. One Pew study has indicated that 60% of adult Americans have no hope of their data being protected from corporations or governments. The reason is simple, the absence of tools to do the job. Protecting your data is still so complicated that average users can not wrap their heads around it. Every day, we see examples of privacy being compromised leading to:

Paying heed to the plight of many, Yoav with his team of developers started working on a project to create a comprehensive, simple and competent app for average users which can guarantee their data’s protection at all times. The task was huge but by bringing their 8 years of research and experience of creating successful apps like MyPermission, Yoav was all set to achieve what he believed is a basic human right in the digital world.

Beginning of the Journey

Before embarking on their current venture, Yoav had successfully created a data protection app which was downloaded more than 3 million times. They spent a long period of 8 years developing and creating MyPermission app, hence much inspiration for a comprehensive app, which can be a one-stop-shop of defence against any kind of digital attack was taken from the previous experience. The development team made use of their learnings from the past projects and after months of brainstorming and sleepless nights were able to launch the beta version of MyPrivacy app in mid-2019. Since then more than 300,000 users gave their validation for this project.

After almost one year of finishing touches and tweaking, finally, MyPrivacy was launched in March 2020 and became the first app offering a VPN, app lock, password manager, private browser, social permission manager and photo vault backed by an easy-to-use platform. With the mission to bring privacy to the masses and help the average users better protect themselves online, MyPrivacy app offer services like:

What is needed now?

There is no doubt that the fight against data theft has just started and people are going to find more and more ways to exploit it. The only way to beat it by spreading awareness about data theft and tools which can be used to prevent it. MyPrivacy app is the first step towards a data-safe environment where your information belongs only to you until chosen otherwise. The field is set and in past years people have achieved significant milestones in spreading awareness and raising concerns where data was procured and utilised illegally. With MyPrivacy, the first step for controlling your data has been taken. By increasing awareness, demand among users for protecting their data and people working together for this goal, surely we can win this war.

"Given the increasing consumer awareness of online risks and the complexity of taking action across many services, easy-to-use one-stop-shop tools like MyPrivacy fill a growing consumer need,”

- Jules Polonetsky, Co-Editor of the Cambridge Handbook on Consumer Privacy and CEO of the Future of Privacy Forum

The data theft threat is real. How do I know? Because so much data has been captured and researched in past few years that legislatures around the world have taken into account the dangers of this resource and have drafted data privacy regulation with implications for those to fail to follow.
The EU has created the General Data Protection Requirements (GDPR) that states laws for data capture, storage, usage, and sharing for companies. The law is applicable not only on EU based companies but for the data of every European citizen. Those who fail to abide will be charged up to 20 million euros or up to 4% of annual revenue as fines. Same goes for California Consumer Privacy Act (CCPA) for saving the data rights of American citizens. Data privacy regulations are going to be the catalyst for creating a data safe environment for everyday users.

Data has just started to expand and there is no doubt that it will grow in terms of value for the years to come. This gives rise to a new kind of threat where corporates are stealing data for personal or financial benefits. Today, there is a need to spread awareness about this issue and make data privacy regulations mandatory. In the meantime, it is up to you to protect your data from the tech-sharks who are waiting to feed upon you.

MyPrivacy app has taken this conversation one step further by being the first comprehensive data protection app offering complete protection to average users from all kinds of data theft. With more than 300,000 downloads of the beta version, it is easy to infer that people need what MyPrivacy has to offer. With time, they have made their solutions better and now with their official version being available for iOS and Android devices, it will be interesting to see how it leaves its mark on the lives of millions of digital beings (that’s us).

Entrepreneur and mental health experts Maxim Mamyoco and Vladislav Vashkevich have launched their latest product MentalMirror, a self-care app designed to identify anxiety, depression and other mental health issues at an early stage and help in preventing it. The app was launched today on Google pla

London, UK, 23rd February 2021- App Radar, an Austria-based app marketing company has acquired its Spanish competitor TheTool, which is a VC-backed developer of an app optimization platform. According to sources, the assets-only deal will strengthen App Radar’s presence in Europe and enable th

Employees often use their smartphones in the workplace. A good example is doctors and nurses who use ephemeral or ‘disappearing’ messaging apps to conveniently communicate with colleagues and to send or receive information about their patients. It has been reported that four out of every