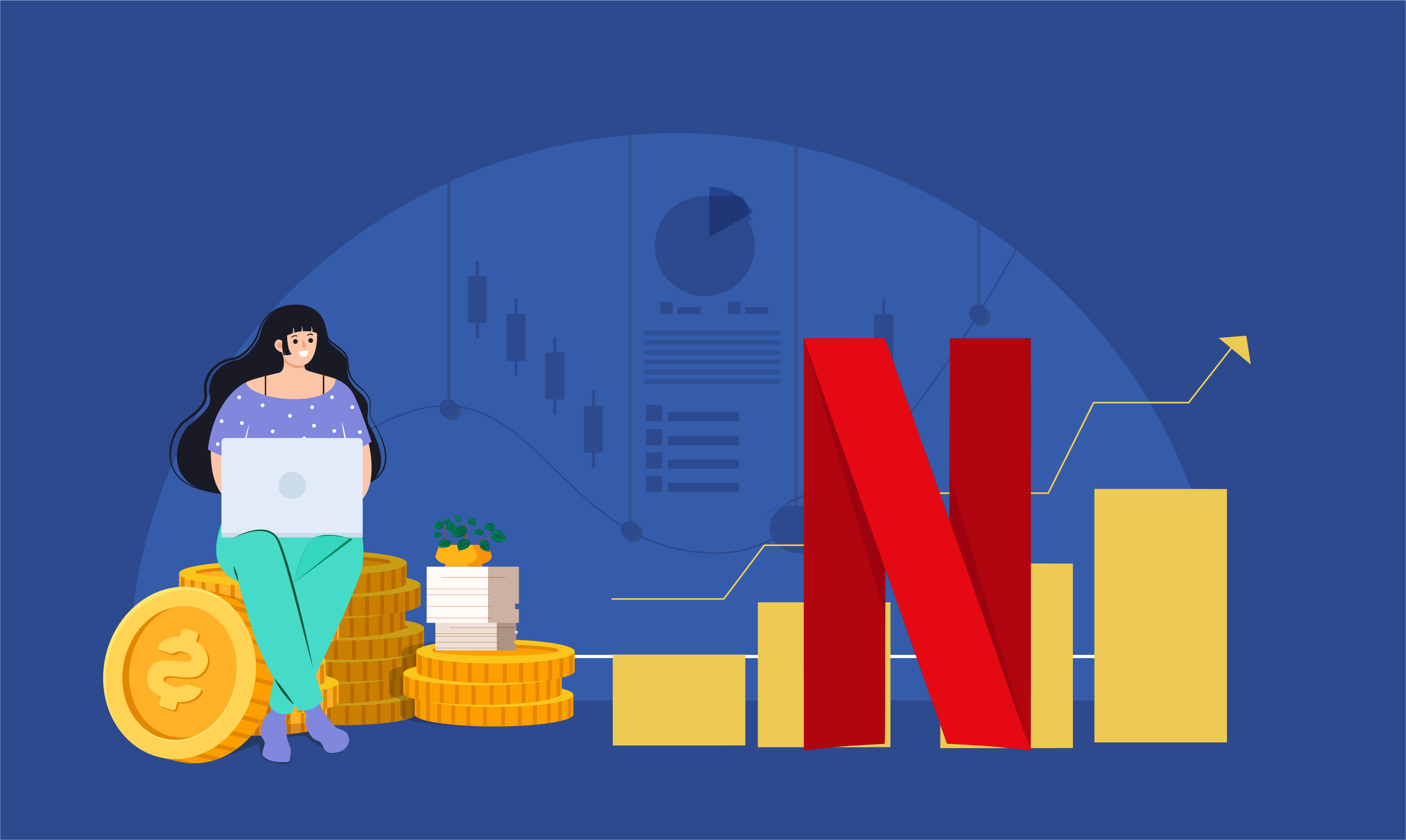 Now, the easier answer to this question is the subscription cost. Well, yeah, that’s one of the factors through which Netflix earns. But that’s not it. The Netflix revenue model includes multiple factors of making money which we will discuss further in this blog. But before that, let’s have an insight into the short history of Netflix.

The growth of Netflix has seen a rapid progression even since the beginning of the 21st century. When Netflix entered the market, Netflix vs Blockbuster video became one of the crucial case studies of one of the best streaming services. Netflix wanted to join hands with Blockbuster, but the deal never happened. Thus, Netflix continued its journey as an independent platform and worked on expanding its technologically advanced business model compared to the Blockbuster video.

How much does Netflix make? - Revenue Insights

To understand the growing revenue made by Netflix, let’s have a look at its subscriber count first. In 2000, Netflix had 300,000 subscribers, which only grew to get double in 2002. That’s 600,000 subscribers from 300,000 within two years. Later, in 2005, it was confirmed that Netflix had securely established a network of 4.2 million subscribers. 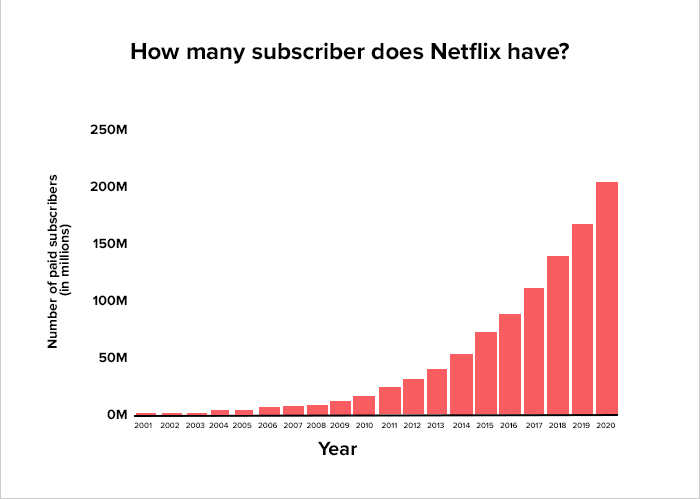 Now, let’s dive into revenue details. In the first quarter of 2011, Netflix reported total revenue of $719 million. Moreover, in the last quarter of the same year, it was $876 million. The revenue growth since then has seen an exponential increase in its numbers. The chart below throws an insight into Netflix’s quarterly revenue growth for the last four years. 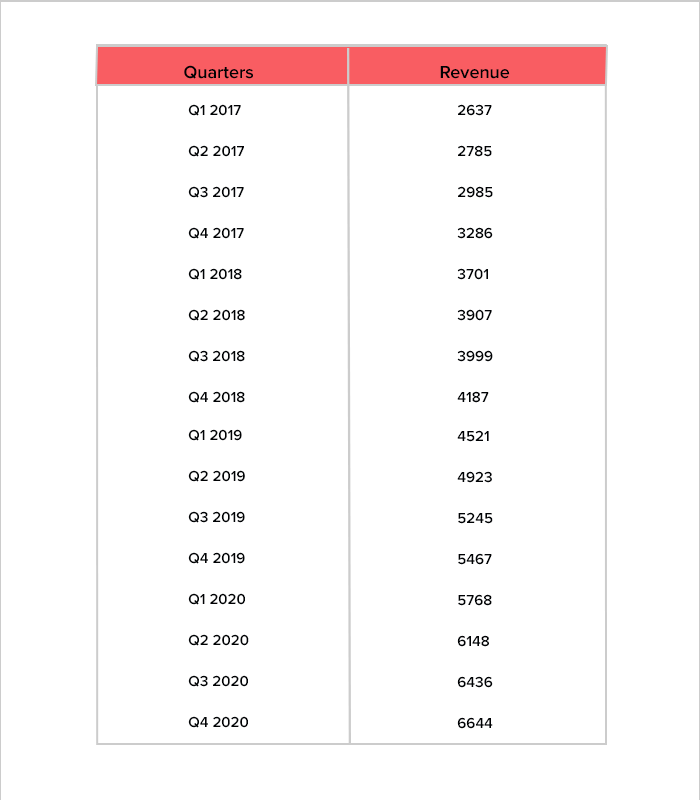 According to Statista, Netflix generated total revenue of $7.16 billion in the first quarter of 2021. In the previous quarter, this revenue was limited to $5.8 billion. Moreover, another data by Backlinko suggests that currently, Netflix is making an average revenue of $10.82 per user globally. The data witnessed a 25.66% hike since 2016. While in the US & Canada, the revenue per subscriber is $13.51, 89.74% more compared to the Latin-America subscriber network.

How much does Netflix make a year?-Net income trends

Now, let’s discuss the real deal. The net income that Netflix generates annually. For that, BusinessofApps has referred to official Netflix statements to collect its financial data. For the last quarter of 2020, the data suggests that Netflix generated a net income of $542 million along with an operating income of $954 million. However, compared to the third quarter of the same year, it is still less. In the third quarter, Netflix had generated $790 million as net income along with $1315 million operating income. The table below shows the quarterly net and operating income for 2019- 2020. 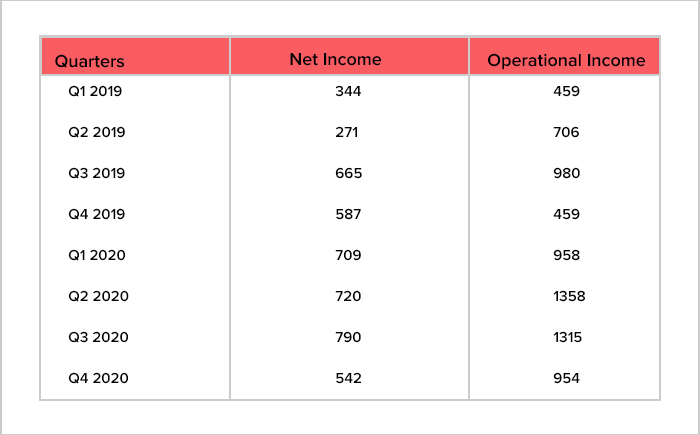 How does Netflix make money?- Source of income

Now, the information we discussed earlier will help us in understanding the position of Netflix as a global streaming service. Netflix’s sole source of income is its subscribers. Netflix does not support advertisements. Nor does it sell the user data to third parties. Netflix’s user-data security protocols are another reason why Netflix is leading the market as a streaming platform.

On average, Netflix earns between $8 to $15 per subscription in a month. The data also varies according to the location. In the US, the cheapest Netflix subscription costs $8.99 per month. The plan includes a one-screen-streaming on any device. However, the ULTRA HD feature is not offered in this subscription plan. On the other hand, the costliest package comes with a charge of $17.99. It also supports four-screen streaming.

Now, take another country like India as an example. In the Indian market, the cheapest Netflix plan begins at $2.70 per month. However, the plan only supports Netflix streaming services on one phone or tablet device. The costliest plan in India with the same features as the US's costliest Netflix plan comes with a charge of $10.28 per month.

Moving further, we are addressing a couple of common questions that individuals are often asking on the Internet.

1.How does Netflix make money on originals?

Ans-  A few years back, Netflix used to stream shows by purchasing the license from other production companies. However, that changed and now, Netflix started producing its shows as well. Netflix also goes into partnership with other content owner companies such as Sony.

2. How do Netflix movies make money?

Ans- Netflix movies are usually based on what users might love. Thus, Netflix either tries to get paid licenses to stream these movies or produce them. The earning is entirely based on the subscription cost. Therefore, the goal is to push content that might influence subscription count positively.

To conclude- There is no doubt in the fact that Netflix’s revenue model is perfect. The level of user satisfaction it has due to non-usage of advertisements is something that makes it unique and a preferred choice as well. Moreover, apart from being the best streaming service, Netflix surely knows how to play the role of one of the best app marketing agencies for its mobile app as well. If you are following Netflix over its social media platforms, you will see Netflix is super active on Facebook, Instagram, and Twitter with memes and fan-favorite posts. So, one can learn a lot of things from the amazing business model that Netflix follows internationally.

PREVIOUS What is the Cost of Custom App Development for SaaS-based Business?

SocialPeta is a smart Ad intelligence and ECOM intelligence tool designed to empower businesses of all sizes. The tool uses smart algorithms to target competitors to gather the necessary information like their ad strategies, top networks, publishers, advertisers, and more. The organized ad data coll

Have a top-notch business idea? Here is how you can pitch it successfully to investors

Entrepreneurs must be able to effectively present their companies. To make your entrepreneurial dream a reality after developing your business idea and creating a business plan, you'll need cash. Even if you don't intend to seek investment, having a strong elevator pitch shows that you are k

Beat The Competition With A Sublime B2B Mobile Sales App

If you’re a brand or wholesaler, it’s likely you are running your business using mobile devices. If you’re not, then you may be considering it. The successful B2B mobile apps are becoming a necessity for CPG (Consumer packaged goods) brands and wholesalers across the globe, and the