The Habit Driven ‘Hooked Model’ and How Apps are using it

What’s the hooked model? How does it help in making habit-forming apps? 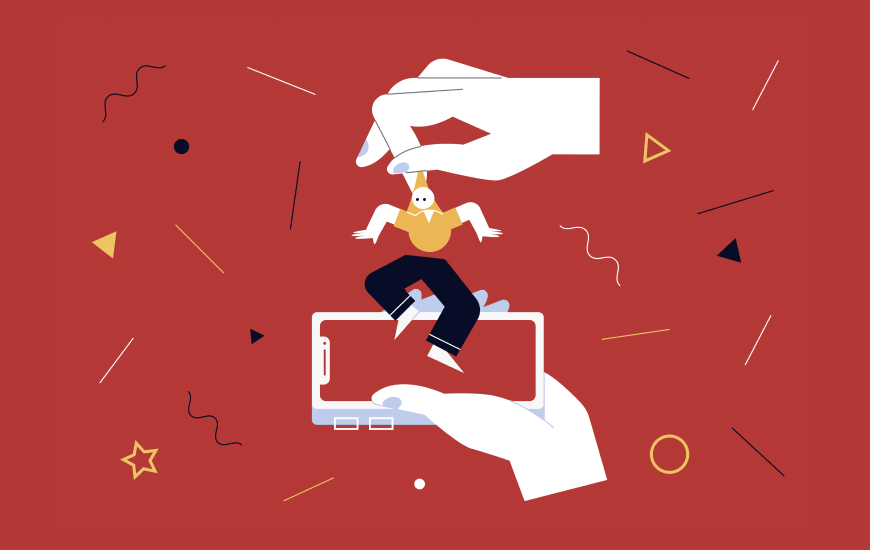 You check Facebook for one last time before dozing off or open Instagram even before opening your second eye in the morning.

At work, you randomly check into Pinterest and pin some boards even if you never intended to in the first place. Or open YouTube to check some trending videos.

Whenever you get the time, you pick up your phone and browse (at times aimlessly) through social media.

Virtually strolling through social media has become a safe haven for people, especially millennials and Gen Z. And the internet is the answer to everything. You want to find out an answer to a certain query you immediately google it up. You want elaborative descriptions you quickly go through Wikipedia. Media has been constantly competing to get the attention of the users. They are skillfully creating ways on how to make customers come back to maintain the retention rate. Remember the Howard Beale Show from the 1976 multiple Oscar-winning film Network exactly reiterated this trend? Now replace TV with the presently relevant Social Media.

It’s fascinating, at the same time scary to observe how the progression of addiction is growing every day. An app developer realises the power s/he wields only when his/her creation is downloaded and used by millions of people worldwide. It feels like swinging Thor’s hammer. Consider PUBG, Call of Duty, Snapchat or TikTok. Such apps don’t necessarily demand your motivation but emit immense addiction power. They can be easily classified as Hooked apps as each of them is a habit-building app.

As an app developer, this is the ultimate objective. But before you learn to get users hooked on to your app, you must learn more about habit-driven design.

In this ingenious concept devised by author Nir Eyal called the ‘Hooked Model’ or simply ‘Hook’, he explains the design pattern which companies use to form habit-forming products. It consists of 4 steps- 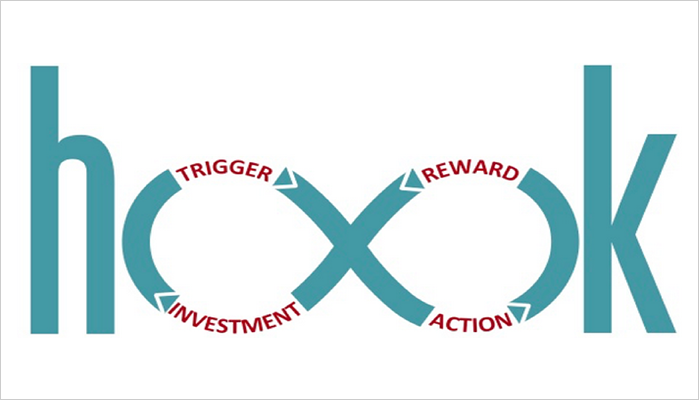 The Trigger generates action as it pushes you to do something. Suppose there’s a notification on your phone and you’re prompted to click it. The action (later) results in the opening of the app. Triggers can be further categorised into two- External and Internal. The notification or simply viewing the icon of an app causes a trigger which is external. The emotion or the urge is Internal Trigger. For eg., you want to google a piece of information before putting it up on Twitter or you want to read the latest Premier League standings as you see a notification on your device. Studies reveal that negative emotions trigger to use your devices more. Like, if you’re feeling bored, helpless, lonely or sad, it’s more likely you’ll pick up your device.

Now that you’ve been triggered, there has to be a course of action. You open Instagram and scroll down, and in the process, you double-tap on a couple of photos or stop to view a video. Maybe check out stories as well. According to a formula theorised by B.J. Fogg, a behaviour scientist at Stanford University, that for any user behaviour there should be considerable motivation, ability and trigger put together. To put it mathematically-

App makers who use creative mobile app marketing techniques are aware that once you are using an app, you should feel exalted or satisfied. The number of reacts your post receives, you come across some hilarious memes on Twitter, someone DMs you a BTS scene from Avengers: Endgame on your Insta are some instances that make you feel good, and you end up spending more time on these apps. In the words of Nir Eyal, if ‘your itch is scratched’.

The element of surprise is what is taken into consideration. That’s why ‘Variable Rewards’ are important. Now, what are those? Let us understand. 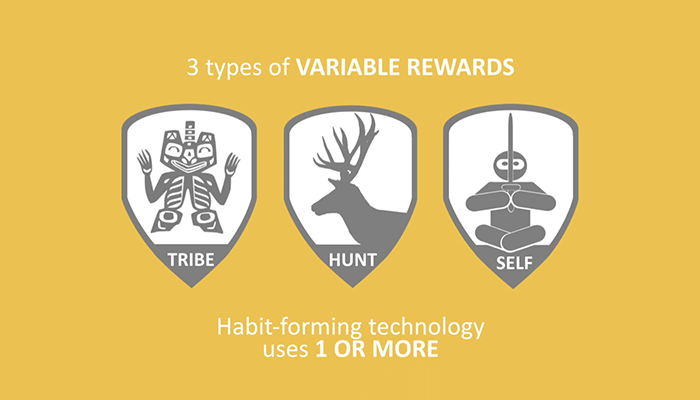 A Variable Reward is divided into 3 categories-

These habit-forming apps procure your interests in the form of investment. For eg., if you open YouTube and watch a couple of videos and seek inspiration, you may want to modify your channel. You may want to upload videos and put them on for the world to see. A developer with acute knowledge of pulling you into the game knows that you have invested a portion of your self to the app, meaning now, you are likely to be a regular visitor of the same. This applies to e-commerce websites too. Suppose, you buy a book from Amazon and you receive it on time, like the packaging and most importantly, the book. You read it and review it on the product page itself. It garners audience. This makes your experience worthy, and now you’ll develop a knack for repeating the course. That’s how mobile app engagement is created and the investment is analysed.

Now as an app developer you know what is a hooked app, what do you need to follow to place your app in the same league? It’s not easy to put into words unless you comprehend examples of popular app makers who have done it or still doing it.

The following explains how two popular apps are following the Hooked model to be the best habit-forming apps. 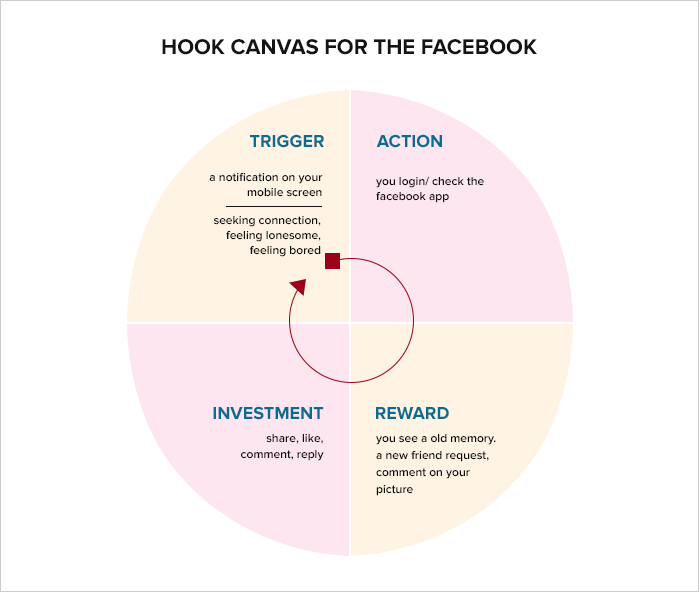 Step 1: Trigger
Whenever a push notification pops up on your phone, you are filled with anticipation. It can be of someone who shared your post or your friend’s birthday, you never know.

Step 2: Action
You see the notification of a friend tagging you in Memory, get persuaded to click on it and it takes you directly to the app.

Step 3: Reward
You see, it’s a throwback photo that a friend has tagged you in. You instantly feel overjoyed and recall those old memories.

Step 4: Investment
You make the urge to Haha react to it along with adding a jovial comment to it. In turn, your friend Love reacts to the comment and makes an effort to reply. 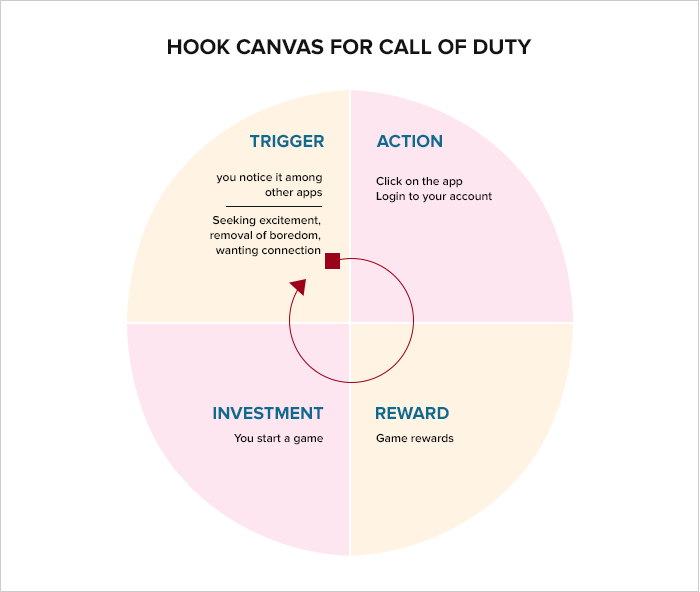 Step 1:Trigger
You’re scrolling your phone when you notice the CoD app, and you feel like you should play it.

Step 2: Action
You remember how well you played the other night and feel like continuing the streak. Thus, you click on the app icon.

Step 3: Reward
You see there are unclaimed awards from your last win including the daily reward as well. This makes you instantly happy with a sense of moral achievement.

Step 4: Investment
You claim all the awards and now get pumped up to play more which you eventually do.

What you need for the Best Habit Forming Apps

Now that you’re thorough with the model and also the examples, it’s time to put your app development skills into fruition and create the app accordingly. Understanding the psychology that goes into creating a hooked app is the foremost thing.

Your objective should be clear

This is the first step in any situation and the primary requisite in app development. If you want a user to visit your app even once a day, it should be so compelling that he/she should do it out of habit. As a developer, your job is first to realise the predicament that people are facing and mould an app that should faithfully fulfil it. That is your objective.

It’s difficult nowadays to find the ‘pain point’ as there are like 10 apps for every grievance and creating something out of the box is easier said than done. But it’s not stopping people from making apps. If there’s no problem, then introduce something different; something that people may not easily reckon. Take the ViewBug Photography app as an example. It has filters and tools which you may find in other editing apps as well, but it introduces the concept of online contests where your photos will be seen by users, and they can reward it accordingly. For the long and short of it, ViewBug’s serving you 2 purposes- click/editing photographs and partaking in genre-based contests; the objectives are transparent.

Now that you know what your app is about, the approach should be easy to understand for the users. The UI and UX design are the two most vital components of your app, and it should be such that the user feels the urge to use your app more and more. It should be simple. Now simplicity doesn’t mean it has to have minimal features; it means to give value to the consumer without jargonising much. The maiden version of your app need not have everything you planned as you can slowly unfurl them with timely updates.

Focus on onboarding for enhanced engagement

Onboarding is a key to your app’s success. For the user, it should be a worthy experience. Apt onboarding is critical for successful retention rates and user lifetime value. It includes cutting edge design, effective UX, total customer satisfaction and value for services. To nail this, you need to follow certain aspects like- 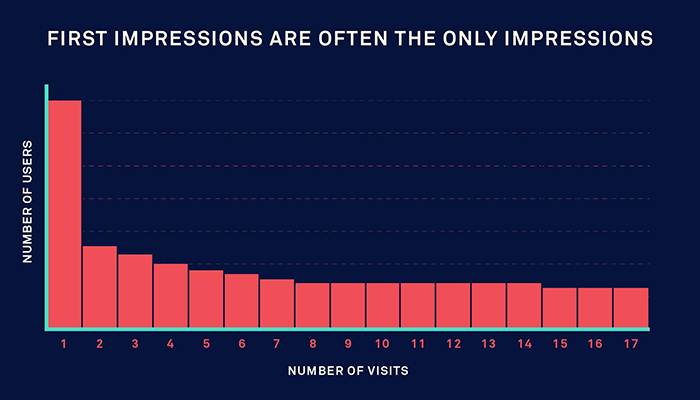 The first impression of an app is usually its acid test. 67 per cent of the customers back out from an app after using it for the first time because of bland user experience. Therefore, the onboarding process should make it cohesive for them.

Coming to a full circle, your app yearns to become the hooked app by following the above procedures. Once that stage is reached, there will be no looking back. Nir Eyal explains in his book Hooked, “To change behavior, products must ensure the user feels in control. People must want to use the service, not feel they have to.” But make sure your app has a high visibility rate and properly optimised in the respective app markets so that people can download it more and more.

To conclude, a hooked application ensures the ways you bring a user into a system. Make the app a daily habit for the user and make sure they keep getting the variable rewards which pushes them to invest progressively on your app.

NEXT Where Java meets Blockchain- The rise and shine of Lisk

Today, we see developers constantly working to improve their apps to bring in features that attract users. These improvements are happening due to changing user requirements.  Earlier, users were happy with applications that could run smoothly even if their interface was not up to the standard.

5 Ways to Add Engaging Design to Your App

Mobile applications are literally dominating the world with their outstanding benefits and extreme outreach. The creation of an application from idea to live product is transformed by the mobile app development world using keen knowledge and precise analysis. Still, some apps fail in the market just

Mobile app UI design is the first impression of an app. It keeps the users connected to the brand, simplifies user journey in the app, increasing the overall ROI of the app. When the mobile app design guidelines are customer-centric, followed by engaging content, there is nothing stopping for an app